The idea of a Universal Basic Income (UBI) is gaining more attention. With a UBI, the government would give every adult the same fixed, monthly payment regardless of work status, health, or wealth. There are serious reasons to be cautious about UBI:

While the motivation behind UBI is admirable, it is not the right solution to the country’s core economic problem: the concentration of opportunity.

Don’t call it a comeback—it’s been here for years. Even though the idea of a Universal Basic Income (UBI) has been discussed more of late, the proposal dates back to economist Milton Friedman in the 1960s. Being universal, the idea calls for the government to give every adult a fixed payment, regardless of work status, health, wealth, or other criteria. Being basic, it is intended to provide foundational income for people’s most fundamental needs. As policymakers grapple with how to handle the economic disruption that is hallmark of the digital age, some are wondering if this 20th-century policy idea might be right for the decades ahead.

The motivation behind UBI is admirable. As noted in Third Way’s recent memo, A New Cause for Democrats: Restoring the Opportunity to Earn in the Digital Age, opportunity is becoming more concentrated across the United States. Workers see headlines touting low unemployment, but two-thirds of US counties saw a decline in businesses between 2005 and 2015. It’s far too difficult to get the skills needed to succeed in an economy that demands postsecondary credentials. And benefits and pay have been severely eroded for the poor and middle class.

Despite interest from some on both the left and the right, a careful examination of UBI proposals underscores the need to be cautious about its promises. This memo outlines the top UBI proposals and explains five causes for concern.

UBI has a foot on each side of the political spectrum. On the left, UBI is championed as a solution to deep poverty and an alternative to low-wage, undesirable labor for some workers. Proponents fear large-scale worker displacement due to technological change. They argue a basic income would enable more people to become entrepreneurs, pursue artistic endeavors, find more rewarding jobs for the long-term, or simply work less if they choose. On the right, UBI is defended as a replacement for an inefficient welfare state. These conservatives argue that cutting checks to everyone, instead of maintaining a bureaucratic web of means tested programs and benefits administration, would reduce government waste and leave people better off.

This dynamic plays out in two leading proposals to implement a UBI in the United States:

The first belongs to former Services Employees International Union (SEIU) President Andy Stern. Under his plan, released in 2016, every adult citizen between 18 and 64 years of age would receive $12,000 per year in cash from the government, and those over 65 would be guaranteed at least $12,000 in annual Social Security benefits. Stern suggests a variety of methods to finance his UBI, including a financial transaction tax, a non-regressive value-added tax, and a wealth tax, as well as reductions in military spending, farm subsidies, and tax expenditures. He expects UBI would replace many safety net programs and free up some additional funds. Stern also proposes changes to future Social Security contributions and a non-employer based health care system.1

On the other side of the political spectrum, Charles Murray of the American Enterprise Institute proposed a conservative version of UBI. He suggests a $13,000 annual grant distributed in monthly installments for everyone over 21. While $3,000 of this grant is mandated to go towards health care, the remaining $10,000 can be used as the individual sees fit. The plan is financed in two ways. First, Murray recommends a graduated surtax on income between $30,000 and $60,000. Second, he eliminates a whole host of social welfare and earned benefit programs, including Social Security, Medicare, Medicaid, food stamps, and housing subsidies, in addition to cutting transfer payments to businesses, like agricultural subsidies.2 Murray estimates his annual UBI would cost approximately $200 billion less than current spending on social welfare programs.3

With either approach, UBI is based on assumptions about the future economy that run counter to many economic realities. As a result, it creates a series of problems for the modern US economy that need to be examined. Those problems fall into five categories:

Many of the most ardent UBI supporters believe the policy is an answer to a world where work is vanishing. This is a popular view in Silicon Valley, where many predict widespread technological unemployment is just around the corner.4 But there is almost no evidence that work is ending. Instead, work is changing.

While we may see a net gain in jobs over the coming years, disruption will still be rampant. These jobs will be in different locations, require different skills, and offer different benefits. That’s why we need policies that help workers adjust to these new realities—not surrender. Reinventing postsecondary education to create more options outside of a four-year college degree, as well as redesigning worker pay and benefits, would do far more for the next generation of workers.

With a foundational, albeit limited, income under UBI, some Americans may choose to work part-time instead of full-time. Others may leave the labor force for years when they would have otherwise worked. Eduardo Porter writes that, as almost one quarter of US households make less than $25,000 a year, a $10,000 check each for two parents could change their decisions on how to balance work, child care, and other obligations, resulting in less full-time participation in the labor force.8

If people transition away from full-time work, the US economy would suffer. Macroeconomic theory holds that economic growth is dependent on three factors: increases in capital, advances in technology, and growth of the labor force. UBI has the potential to directly decrease the growth of the US economy, namely GDP growth, through reductions to labor force participation. With GDP shrinking, tax revenues would fall. This would in turn mean fewer resources to help the disadvantaged or to invest in the future, resulting in lower overall prosperity.

The numbers speak for themselves: UBI is either very expensive or very stingy. The progressive version of UBI is expensive to the point of impossibility, while the conservative version is penny-pinching and punitive. Looking first at the former, consider an annual grant of $12,000 for all American adults aged 18 to 64, like Stern proposes. Stern estimates his plan would cost between $1.75 trillion and $2.5 trillion. The high end of this range seems realistic. Almost two-thirds of the population, or 200 million people, would receive a monthly UBI check for $1,000, with a cost of approximately $2.4 trillion every year, or one-eighth of GDP.9 Social Security beneficiaries currently receiving less than $1,000 a month would also get a supplement, adding an estimated $52 billion a year.10 By comparison, our entire existing social safety net costs $2.6 trillion. That includes Social Security, Medicare, Medicaid, Unemployment Insurance, and veterans’ benefits.11 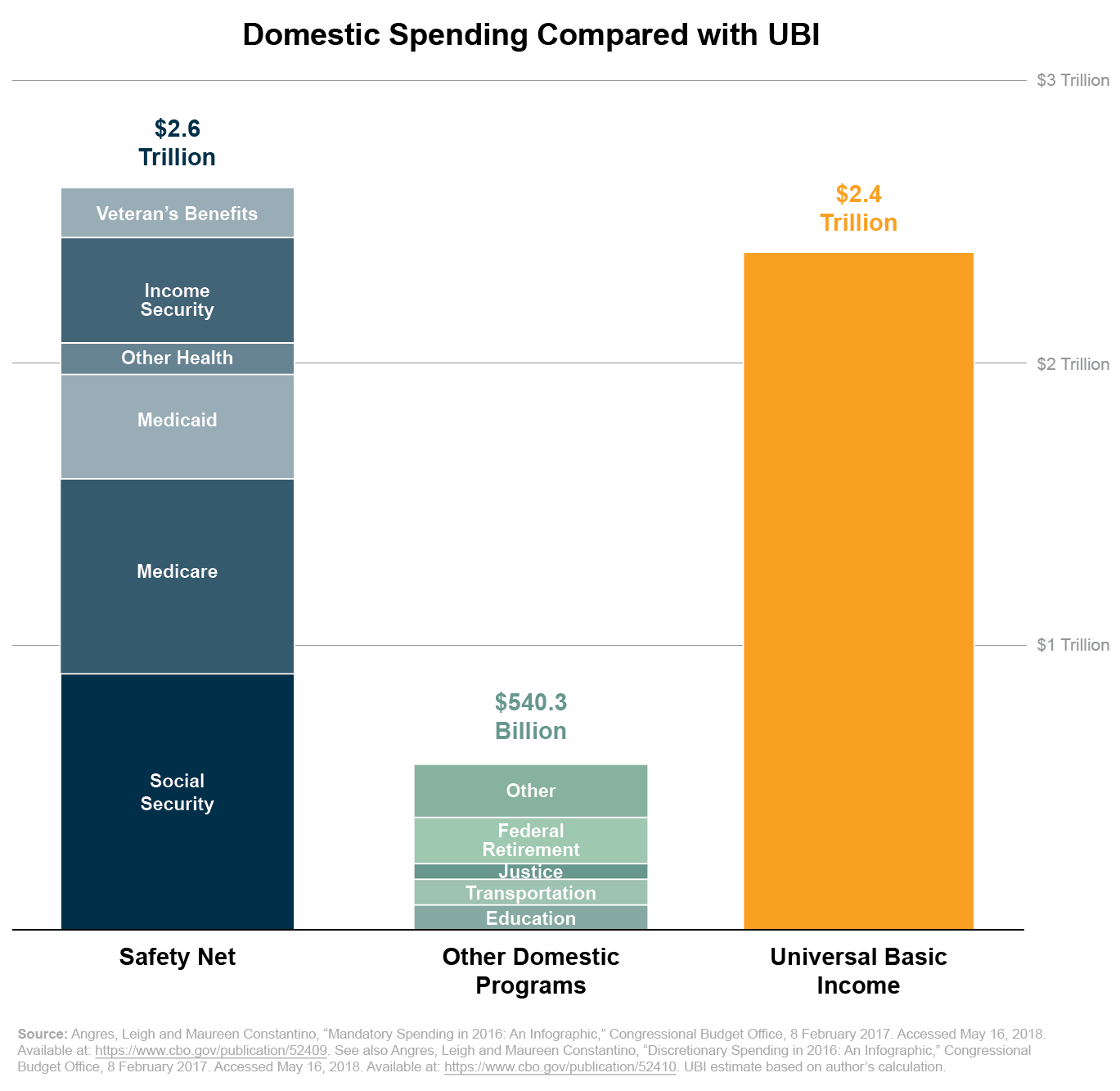 Unless these critically important programs are eliminated, a UBI program would need to be paid for with higher taxes. It’s not clear whether it’s even possible to raise enough revenue for this initiative. The federal government took in approximately $3.3 trillion in 2017, so a taxes-only approach to funding Stern’s UBI would require an unheard-of 73% increase in federal revenue.12 Even if defense spending was slashed by one-third, for example, a 52% tax increase would still be required.13 Funneling all of a tax increase into UBI would also neglect our existing programs, like Social Security, which needs financial support to remain solvent past 2034.14

If significant tax hikes aren’t viable, then the question remains: what gets cut in order to fund UBI? Under this scenario, UBI becomes stingy and punitive, as a vast amount of important government programs would be on the chopping block.

Even a UBI that retains much of the existing social safety net could hit the disadvantaged harder, depending on which tax credits and government assistance programs get cut. Stern listed the Supplemental Nutrition Assistance Program (SNAP), the Earned Income Tax Credit (EITC), and housing assistance as potential policies to end in favor of UBI. But consider one example. In Queens, New York, a single, low-income working parent with three children can receive up to $31,100 worth of benefits annually from SNAP, the EITC, and Section 8 housing vouchers alone, and for good reason.16 Replacing those benefits with a $12,000 UBI for the parent would reduce the family’s income and benefits by $19,100.

A fundamental motivation for UBI is to eliminate poverty, but the tradeoffs necessary for funding would likely cause harm to vulnerable populations. This begs the question: If the main difference between UBI and our current safety net is that UBI gives relatively more to people who don’t need help, what would make UBI worthwhile? Some proponents have suggested UBI could be restricted to certain populations in need, but that would defy the universality at the idea’s core. At this point, what they are really proposing is an expansion of the existing safety net. That’s a worthwhile conversation to have, but it’s not about a universal basic income.

The idea has been scarcely tested

There are a handful of past and ongoing experiments with UBI. Unfortunately, the experiments have been flawed or are too small to effectively prove that UBI could live up to some of its proponents’ claims:

It will be interesting to see what comes out of future studies and experiments. But policymakers should be wary of studies that simulate the upside of UBI (a monthly income) without simulating its downsides, namely sweeping benefit cuts or tax increases.

The motivation behind most universal basic income proposals is admirable: reduce widespread poverty and provide lifelong income security to all. But a UBI in reality would likely fall far short of eliminating poverty while imposing large economic costs and ignoring future opportunities for work. It also ignores that American life is rooted in a civic tradition of earning. Seventy-three percent of Americans believe working hard is “very important to getting ahead in life.”21 That’s the highest among advanced economies, with the United Kingdom second at 60% and Germany (49%), Japan (42%), South Korea (34%), and France (25%) far behind.22

Instead of pinning all hopes to UBI, policymakers should focus instead on designing ambitious policies that address the need that Americans have to earn a good life.