Sustainable aviation fuel (SAF) –liquid fuels that can be used in today’s aircraft and are cleaner than fossil jet fuel–will play a major role in reducing emissions from aviation. Several programs across the federal government are working alongside industry and university partners to develop and scale-up these new fuels. As Congress begins crafting the Fiscal Year 2023 appropriations bills, it should provide increased funding for these programs so we can accelerate our efforts to build out the supply of SAF needed to meet our climate goals.

Transportation is the largest contributor to greenhouse gas (GHG) emissions of any sector, with aviation alone contributing about 3% of total U.S. GHG emissions. As ground transportation electrifies, aviation’s share of emissions is expected to grow. Aviation is widely recognized as one of the hardest modes of transportation to decarbonize,1 but sustainable aviation fuel (SAF) presents a significant opportunity to reduce emissions in the near- and long-term.  Ultimately, we will need a combination of SAF, electric propulsion and other aircraft technology improvements, operational improvements, and off-sets to get aviation to net-zero emissions by mid-century.2 SAF could contribute as much as 60% of the needed emissions reduction.3

SAF is a liquid fuel that can be used in today’s aircraft and achieves significant emissions reduction compared to fossil-based jet fuel. SAF can be made from a variety of sustainable feedstocks such as waste oils, municipal solid waste, agricultural and forest residues, captured carbon, and more. There are currently seven approved production pathways for SAF–processes for converting different feedstocks into fuel that is safe for use in aircraft–with more being tested and evaluated today.4 The emissions reduction potential of SAF depends on how it is produced, but the international community has generally agreed that SAF should achieve at least a 50% lifecycle emissions reduction compared to fossil jet fuel.5 SAF with net-zero-emissions profiles are also possible, but more work is needed to fully realize the potential of these fuels.6

In September 2021, the Biden Administration announced the SAF Grand Challenge, a whole-of-government effort to reduce GHG emissions from aviation by 20% and produce 3 billion gallons of SAF annually by 2030.7 This is an ambitious goal and will require the federal government, industry and other stakeholders to work together to accelerate the investments needed to develop new ways of making SAF, scale-up production, and reduce costs.

There are many different federal programs working towards this goal. Third Way has identified five key programs that have been particularly successful so far and that Congress should prioritize in Fiscal Year 2023 (FY23) appropriations legislation.8 Table 1 below shows these five programs and our funding recommendations for FY23 compared to FY22. 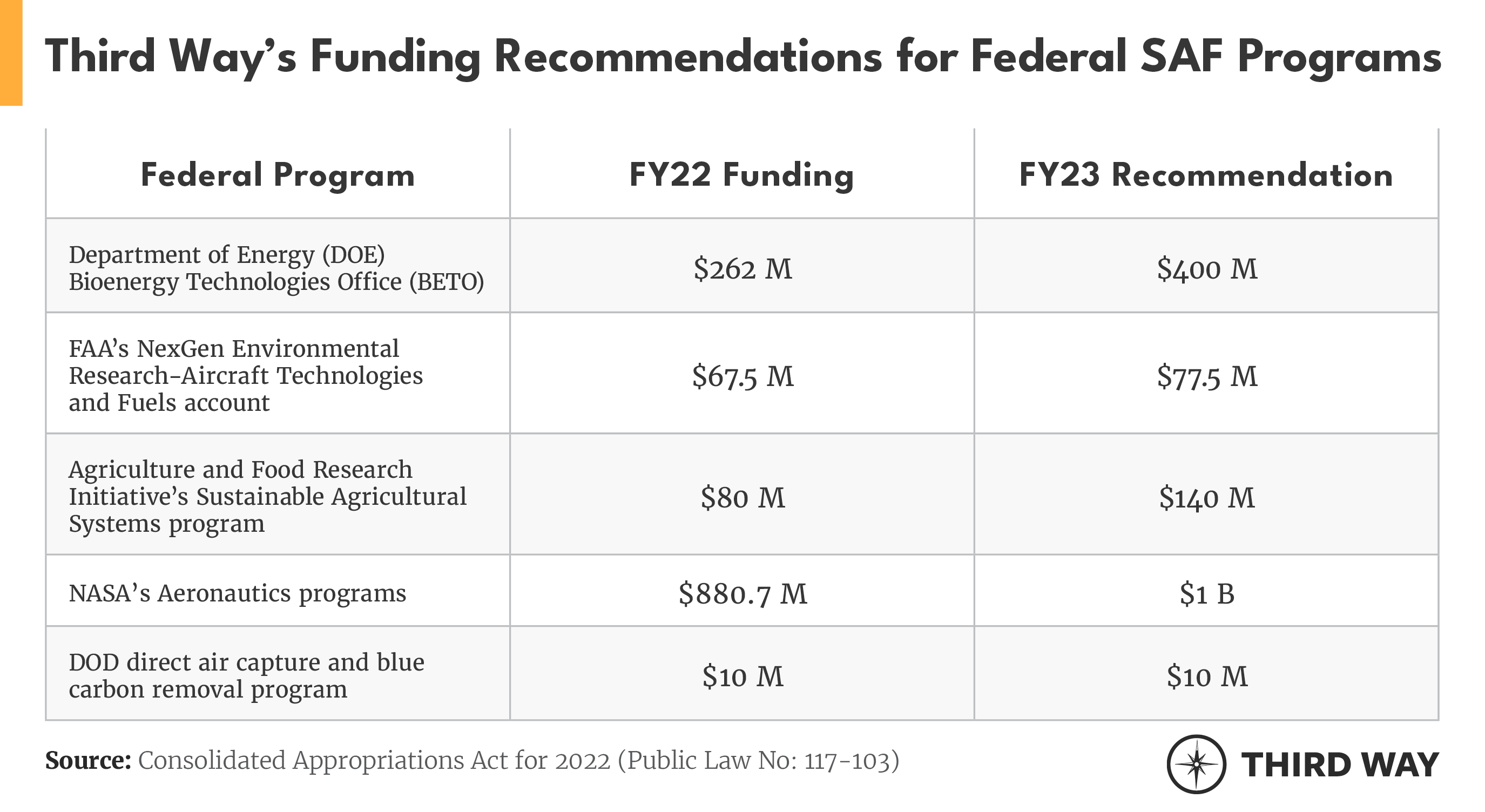 BETO supports the research, development, and demonstration (RD&D) of biofuels made from sustainable biomass and waste resources. BETO has funded work that has helped to make biofuels produced by a wide range of feedstocks more affordable and has helped achieve significant emissions reductions compared to traditional fuels. For example, BETO supported the development of new technology that enabled the first commercial flight using SAF made from recycled carbon gas.9

BETO’s programs have enabled industry to pursue a greater variety of feedstocks to produce SAF, including agriculture residues, municipal solid waste, waste oils, and more. Last August, as the Administration announced the SAF Grand Challenge, BETO awarded $64 million for projects to develop technologies and processes to make SAF and other fuels for heavy-duty transportation.10 Among these awards, Alder Energy in South Carolina will scale up a new technology to convert biomass into carbon-negative SAF; LanzaTech in Illinois will build and operate a pre-pilot facility to produce SAF from waste carbon dioxide and hydrogen produced with renewable energy; and SkyNRG in Oregon will design and build a demonstration-scale facility to convert raw landfill gas into SAF.

More funding is needed both for early-stage research into new feedstocks and biorefining processes to make SAF–particularly for pathways with net-zero lifecycle emission profiles–as well as for getting pathways that have shown promise in the laboratory into demonstration.

We recommend $400 million for BETO in FY23, compared to $262 million in FY22, with at least $152 million of that going to demonstration activities to accelerate the development of improved pathways and refining processes for SAF. In allocating these funds, Congress should encourage BETO to prioritize development and demonstration of fuels with the greatest potential to reduce emissions while avoiding unintended consequences on forests and other habitats and on food supply chains.

FAA’s NextGen Environmental Research programs are essential to developing, scaling up, and deploying the clean fuels and aircraft technologies that will help reduce aviation emissions. Included among these programs are the Continuous Lower Energy, Emissions, and Noise (CLEEN) Program, which enables FAA to enter into cost-sharing agreements with companies to develop and demonstrate SAF as well as emissions- and noise-reduction aircraft technologies;11 and the Aviation Sustainability Center (ASCENT), a research consortium whose analytical work underpins much of the federal government’s work on clean aviation.12 Congress should increase funding for FAA’s NexGen Environmental Research-Aircraft Technologies and Fuels account (which can then allocate funding to the CLEEN Program and ASCENT) by $10 million, totaling $77.5 million in FY23.

Under the CLEEN Program, FAA has worked with companies such as Boeing, GE Aviation, Pratt & Whitney, and others to test and evaluate new, cleaner fuels. This work has led to the certification of seven pathways for SAF that can now be used in commercial aircraft. We recommend $7 million of the $10 million increase be put towards CLEEN so that FAA can accelerate this work with its industry partners by entering into additional agreements with companies for SAF testing and evaluation.

ASCENT brings together university researchers, industry, and FAA and other federal agencies to help analyze new SAF pathways to determine their impact on emissions, performance, and safety. Their work has helped reduce the time and cost associated with getting new SAF pathways certified for commercial use and has helped to address supply chain challenges associated with SAF feedstocks, thereby reducing the cost of standing up new industries around SAF. We recommend a $3 million increase for ASCENT to continue its analytical work, with a focus on ensuring all existing and new aircraft types can operate on 100% SAF in the coming years.13

The USDA’s Coordinated Agricultural Projects (CAPs) are designed to facilitate the development of regionally-based industries producing advanced biofuels and other bio-based products with a focus on enhancing economic investment and job creation in rural areas and improving national energy security. These projects bring together private companies, university research centers, and the federal government to address challenges associated with biomass feedstock production, logistics, and conversion technologies and to analyze the impacts of these feedstocks on agricultural and forestry markets, rural communities, and ecosystems.

For example, one of the CAPs, Integrated Pennycress Research Enabling Farm & Energy Resilience (IPREFER), has brought together universities and the private sector in the Midwest to optimize the off-season production of pennycress.15 Formerly a weed, researchers have modified the plant into a high-yield oilseed crop that can be integrated into corn-soybean rotations, thereby extending the growing season on established croplands and avoiding displacement of food crops. The project is now in the pilot phase. IPREFER’s work will establish a new winter cash cover crop that can generate new economic opportunities for our nation’s farmers while providing a new feedstock for SAF and other biofuels.

We recommend $140 million for the Agriculture and Food Research Initiative’s Sustainable Agricultural Systems program, which funds the CAPs, up from $80 million in FY22. This additional funding will enable USDA to continue building up region-specific, sustainable biomass industries across the country, creating jobs and economic opportunity in rural America while reducing transportation emissions.

NASA’s Aeronautics programs have been working to reduce aviation emissions through advancements in aircraft electrification, aerodynamics, and engine technology. This includes working with other government agencies and with industry to conduct ground and flight tests of different blend levels of SAF and evaluate their performance and emissions compared to traditional fuels. For example, last year NASA teamed up with Boeing to measure emissions from the company’s new ecoDemonstrator aircraft, quantifying the emissions differences between fossil jet fuel and various blends of SAF.16 These efforts are critical to getting new SAF certified and into commercial use more quickly and are thus essential to reducing emissions in the short-term.

We recommend $1 billion for NASA Aeronautics in FY23, a significant but needed increase from the FY22 funding level of $880.7 million. This will enable NASA to continue its interagency work to reduce the time and cost associated with testing and certifying new fuels, and will also allow NASA to accelerate its work on next-generation propulsion systems, including electric- and hydrogen-powered aircraft propulsion. These longer-term solutions will ultimately work hand-in-hand with SAF, which can be used in today’s aircraft, to decarbonize aviation completely.

The U.S. military has the largest fleet of aircraft in the country. As DOD noted in its 2011 Operational Energy Strategy, “As long as U.S. forces rely on large volumes of energy, particularly petroleum-based fuels, the vulnerability and volatility of supplies will continue to raise risks and costs for the armed forces.”17 Particularly given the current global supply chain disruptions and international conflicts, military installations would benefit from technology to convert excess carbon dioxide into fuel onsite.

In 2020, Congress established through the National Defense Authorization Act (NDAA) a direct air capture and blue carbon removal program within DOD, directing the Department to develop and test technologies to capture carbon from the air and ocean and convert it into fuel and other useful products like building materials. This program was originally championed by Sen. Sheldon Whitehouse (D-RI) and Rep. Don Beyer (VA-8) as the SEA FUEL Act.18 It builds on work previously completed by the U.S. Navy in 2017, which culminated in patented technology to remove excess carbon dioxide from ocean water while simultaneously producing hydrogen so the two can be converted into fuel.19 While these direct air- and ocean-capture and conversion technologies are still in the early stages of development, they could ultimately unlock a pathway for zero-emission jet fuel while increasing the military’s energy security and readiness.

We recommend $10 million for this program in FY23, a continuation of the FY22 funding level and consistent with the intention of the SEA FUEL Act. This funding level would enable the Department to continue its R&D work in preparation for moving these technologies into the testing and evaluation phase in the coming years.

Sustainable Aviation Fuel is essential to reducing aviation emissions in line with the goals of the Biden Administration and the international community. Agencies throughout the federal government have worked collaboratively and must continue to do so to develop and approve new SAF pathways and help scale them up towards commercialization. Congress should recognize the role that federal investments have played in RD&D of SAF and the importance of boosting these investments to develop newer, cleaner fuels for one of the hardest transportation modes to decarbonize.

Ultimately, these RD&D efforts will not be enough on their own. We still need to address the higher price of SAF relative to fossil jet fuel, and the best way to do that is through a performance-based tax credit for SAF that incentivizes the production of the very cleanest fuels.20 But even as Congress works on a legislative package that could include that proposal, we can also make progress on ensuring we have the supply of SAF needed to meet our goals, and the annual appropriations process gives us the opportunity to do that. If we are to rise to the occasion of the SAF Grand Challenge and get aviation on a path to decarbonization, Congress needs to support robust funding for the federal programs that are working towards that goal.