President Joe Biden’s Build Back Better plan sets a goal of achieving net-zero emissions economy-wide by no later than 2050, and in the power sector by no later than 2035. After four years of the Trump administration making every attempt to dismantle existing climate measures, having an ambitious plan from the White House to tackle the climate threat is a huge relief. But it doesn’t leave much room for error.

One of the most important things we must do to hit these targets is to keep our existing nuclear power plants online for as long as possible. These plants are the U.S.’s clean energy foundation, providing over 50% of all emissions-free power nationwide. Keeping them running helps avoid additional fossil generation that would replace their lost electricity. It also lets us put every last kilowatt-hour produced by new renewables projects toward pushing dirty power off the grid, instead of using it to pick up a retired nuclear plant’s slack. This is why losing a nuclear plant is such a big, unforced error that puts climate targets in jeopardy.

Why are nuclear plants retiring, though? It has nothing to do with their age or ability to operate. In fact, thanks to technological developments that let plants run more efficiently than ever before, the Nuclear Regulatory Commission (NRC) has begun approving license renewals that allow some nuclear power plants (NPPs) to continue safely providing carbon-free power for up to 80 years, and potentially up to 100 years. The real concern is fierce competition from low-cost natural gas plants, combined with power markets that don’t reward nuclear plants for their climate benefits. Because of these financial challenges, nuclear plants are closing long before they would otherwise need to.

In 2018 we called attention to the uncertain future of America’s NPPs. At that time, studies projected that between 55% and 66% of our existing plants were at risk of premature closure. We knew then, even with the continued growth of renewables, a loss this great would set clean energy progress back by more than 10 years.

With an ambitious goal of reaching net-zero emissions in the power sector by 2035, we simply cannot afford to forfeit any more of our existing carbon-free resources. We need to grow the total amount of zero-carbon power we are producing, not shrink it. With nuclear energy contributing over half of our clean power today, keeping these plants running for as long as possible should be the baseline for setting the U.S. on a path to zero emissions.

Where do things stand today?

The U.S. has lost 11 reactors since 2013. An additional six reactor closures were narrowly averted, thanks to swift action by New York and Illinois to protect their respective fleets. But we can’t count on states to come to the rescue in time, every time. Especially when steep competition from cheap natural gas continues to threaten the economic viability of many operating nuclear plants.

In just the last 3 years we’ve seen five nuclear power plants close prematurely. In their last year of operation, these plants collectively provided 30.7 billion kilowatt-hours of carbon-free electricity, preventing an estimated 19.5 million tons of carbon each year. The emissions abated are roughly equivalent to taking 4,000,000 cars off the road. The loss of these carbon-free generators has dealt a serious blow to climate efforts. And that’s just the beginning if we don’t find a way to value our biggest source of carbon-free power. There are an additional five nuclear plants scheduled for early retirement over the next three years, and several more likely on the horizon. The sheer amount of carbon-free electricity we are poised to lose in just a few years is staggering. In some states, the NPPs scheduled for early retirement provided more clean electricity than all of their solar and wind installations combined. 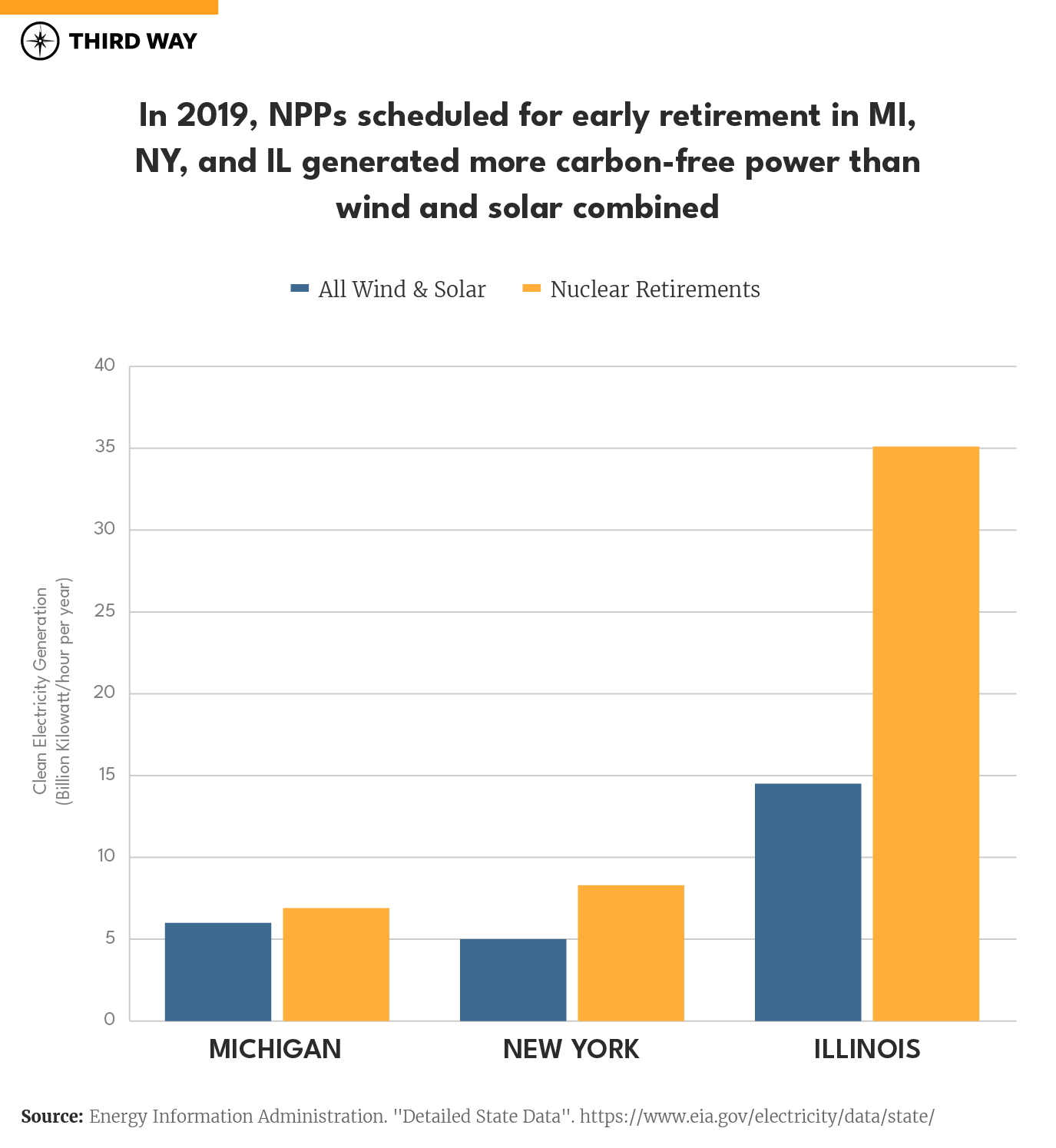 In August of 2020, plans were announced to retire two Illinois NPPs, The Byron and Dresden plants, in the fall of 2021. The loss of these two plants alone would cause a 20 million ton increase in annual CO2 emissions from the electricity sector, sacrificing half of the total progress the state has made in meeting its commitment to reduce overall GHG emissions by at least 26-28% by 2025. That’s just the damage from the plants that have been officially announced for closure. Two additional Illinois NPPs are considered at-risk of shutting down prematurely in the near future. The loss of all four plants would wipe out all of the progress the state has made to reduce emissions since 2005 and then some. To put it a different way, the premature retirements of the Byron, Dresden, Braidwood, and LaSalle NPPs in Illinois would have a larger impact on GHG emissions than the cumulative impact of any EPA regulatory rollback under the Trump administration. These four nuclear plants also have a huge impact on the local economy, accounting for over 28,000 jobs and contributing more than $3.5 billion each year to the state GDP. And a recent Rhodium Group study projects that contributions from nuclear generation capacity could shrink from 98 GW to 32 GW in 2030, with most of this generation replaced with natural gas.

Congress Must Step In

“Climate hawk” Democrats like Senators Cory Booker, Sheldon Whitehouse, and Ben Cardin continue to lead on nuclear legislation, including bills like the recently passed Nuclear Energy Leadership Act (NELA) that support advanced nuclear, and bills like the American Nuclear Infrastructure Act (ANIA) and Nuclear Powers America Act (NPAA) that would support our struggling existing nuclear plants. Even Representative Alexandria Ocasio Cortez has acknowledged there is a place for existing nuclear in the Green New Deal and has expressed support for new nuclear, if it is deployed with environmental justice as a priority.

The best way to ensure nuclear plants remain economically competitive and able to stay online is to value the carbon-free power they contribute to the grid. A broad federal climate policy such as a clean energy standard (CES) would effectively reward nuclear and other low-carbon technologies. However, until something like a CES is put in place, we need stop-gap policies to keep at-risk nuclear power plants online. With two NPPs in danger of shutting down as early as this year, Congress cannot wait to take action.

Below is a brief explanation of three policies that Congress could pursue, each with pros and cons worth taking into consideration:

Congress could vote to establish a production tax credit (PTC) to compensate for the emissions-free power provided by nuclear power plants. One nuclear PTC proposal currently under development would allow existing NPP operators to earn up to a $15 per megawatt-hour credit. This would ensure that cost-effective carbon-free generation is preserved but would also come with measures that ensure plant owners don’t get paid more than they need to remain economically viable.

The American Nuclear Infrastructure Act (ANIA) would establish a program to evaluate nuclear power plants projected to cease operations due to economic factors, and award financial credits to qualified reactors on a dollar per megawatt-hour basis based on a facility’s operating loss over a four-year period.

President Biden has shown repeatedly that he understands nuclear is crucial to achieving economy-wide net-zero emissions, and we have seen consistent bipartisan support for keeping our clean energy foundation up and running. If we are going to decarbonize the power sector by 2035, we cannot afford to take carbon-free resources offline. With two plants scheduled for premature closure later this year and a potential wave of additional closures in the near future, we must act now to prevent a giant setback just when we are finally poised to accelerate our push towards a carbon-free future.