Carbon Pricing: One Piece of the Climate Puzzle

Carbon pricing has long dominated climate debates around the world.1 Academics and the media have called it the single most important policy to combat climate change. We agree that a price on carbon is a critical component of a comprehensive national climate plan. It is, however, only one of many policies we need to eliminate emissions.

15 years of carbon pricing in 40 countries and 20 subnational governments (states, provinces, and cities)2 reveal that although some carbon prices are performing well, there’s a mismatch between theory and practice:

In fact, over the past 15 years, other climate policies have often resulted in the most emissions reductions. Such policies like clean energy and energy efficiency standards have proven to be more politically popular and effective at preventing the deployment of new fossil fuel assets that will run for decades.

Carbon pricing remains a crucial part of the climate puzzle. But the severity of the climate crisis requires a complete set of strong, innovative clean energy policies to get us to zero by 2050.3 We must implement policies now that incentivize and invest in clean energy in order to build support for more comprehensive and ambitious climate policies, like carbon pricing, in the future.4

What Is Carbon Pricing?

The goal of carbon pricing is to get polluters to change their behavior by imposing a cost on emitting greenhouse gases. To implement a carbon price, policymakers in principle identify the costs that greenhouse gases impose on society and put a price on emitting activities that harm the climate. This is what economists call “internalizing the externality.”

The price can either increase gradually or remain at a fixed rate to achieve the desired cost.5 But in practice, carbon prices do not always initially, or ever, capture the full external cost imposed by greenhouse gases.

Broadly, carbon pricing can take the form of a carbon tax or a cap-and-trade system. There are some noteworthy differences between the two, but they share the same goal.6 Real-world carbon pricing instruments often take elements from each.

Carbon pricing policies have many advantages. Some proponents even consider all other climate policies “second best”7 and argue for rolling back existing regulations to better accommodate an incoming carbon price.8 The core argument is that a carbon price is the most economically efficient, lowest-cost way to achieve emissions reductions.9

How Has It Played Out?

To date, the impact of carbon pricing systems has varied dramatically. The United Kingdom’s carbon tax has exceeded expectations. Analysts have credited the policy with reducing the emissions of the British power sector by 22% in the period from 2012 to 2017, all at the low cost of about $25 per ton of CO2 reduced.11That is an impressive performance for any climate policy. Moreover, the UK government effectively coupled the tax with complementary policies, for example the landfill tax.12 This added deeper emissions cuts and improvements for public health without compromising the carbon price signal.

But many carbon pricing policies are not as successful. In fact, the UK’s carbon tax came in response to the ineffectiveness of another policy: the European Union Emissions Trading System (EU ETS). The EU ETS, which covers 31 countries, is a cap-and-trade system that has struggled with low and volatile carbon prices, weak incentives for innovation, and only marginal reductions in emissions.13

Policy ideas often excel less in practice than expected. Implementers only learn of many limitations and drawbacks of policies after they are put into play. The lessons we’ve learned to date can instruct how to improve carbon prices and show that we need additional, complementary policies to address the climate crisis.

With carbon pricing, there are four important observations for us to consider moving forward:

Observation 1: Nearly all carbon prices are too low to drive the ambitious decarbonization proponents have sought

If the goal of carbon pricing is to capture the negative societal impacts of carbon pollution, then emitters should be paying at least ~$50 per ton of CO2e.14 Alternatively, if the goal is to reach net-zero emissions by mid-century, the Carbon Pricing Leadership Coalition estimates that polluters should be paying $40-80 per ton of CO2e.15 But if you look at carbon prices around the world, as shown in Figure 1, policymakers rarely peg them higher than $30. This means that the vast majority of today’s carbon prices are underperforming and unlikely to result in the necessary emissions reductions.

Today’s low oil and gas prices compound the problem. Higher oil and gas costs can outweigh or at least mitigate the added cost of a moderate carbon tax, while low gas prices serve to justify continued investments in carbon-emitting assets.16 Higher carbon prices would certainly help, but attempts to increase them have often resulted in backlash, in some cases even terminating the policy (like in Australia).17 Despite the allure of low-cost emission reductions, if voters won’t allow the carbon prices we truly need, then the mechanisms won’t hit the mark.

Figure 1: The price of carbon in different carbon pricing mechanisms implemented across the world. Only five fully internalize the low estimate of the social cost of carbon, $50 per ton of CO2e.

Several assumptions about the economy and the government inform the optimal implementation of carbon pricing.18 These include: 1) well-functioning, competitive markets, 2) governments with quality emissions data for all major polluters, 3) access to low-carbon substitutes, and 4) no pre-existing taxes or climate policies that create policy redundancy or market distortions.19

We know that carbon pricing policies don’t occur in a vacuum, so how does the world stack up to these conditions? Not always great. Low-quality emissions data has led to ineffective carbon prices and the suspension of at least one carbon-pricing structure.20Additionally, many sectors do not have scalable and affordable alternatives for carbon-heavy activities, such as industrial heat use, or long-distance air and maritime transport. These activities are not substantially decarbonizing even in the presence of very high carbon prices, such as the ones in Sweden and Switzerland (respectively, $127 and $96 per ton of CO2e).

Most often, policymakers introduce carbon prices within already complex regulatory environments, where the pricing systems interact with other policies and taxes, in many cases reducing the former’s effectiveness and efficiency.21Harmonizing the policy landscape can help address these issues. But it can be difficult to coordinate in real-world governments that undergo evolving policy preferences.

Observation 3: Some carbon prices are not delivering the price certainty that investors need

Attaining a 100% clean economy will require long-term investments in clean energy technologies and sustainable infrastructure. Carbon prices do a great job unlocking immediate, low-cost emission reductions (like switching to cleaner fuels, improving energy efficiency, and retiring old coal power plants). They are less successful in incentivizing long-term investments. This is because carbon prices have been too volatile (and oil and gas too cheap) to help convince investors to take a risk on projects with longer payback periods.22

Carbon price volatility is most severe in cap-and-trade systems, where fluctuations in economic activity can cause large, unanticipated drops in the price of carbon.23This happened most notably in Europe (Figure 2), where carbon prices were about 24 Euros in the first year of the policy, dropped substantially and then took until 2019 to recover.24 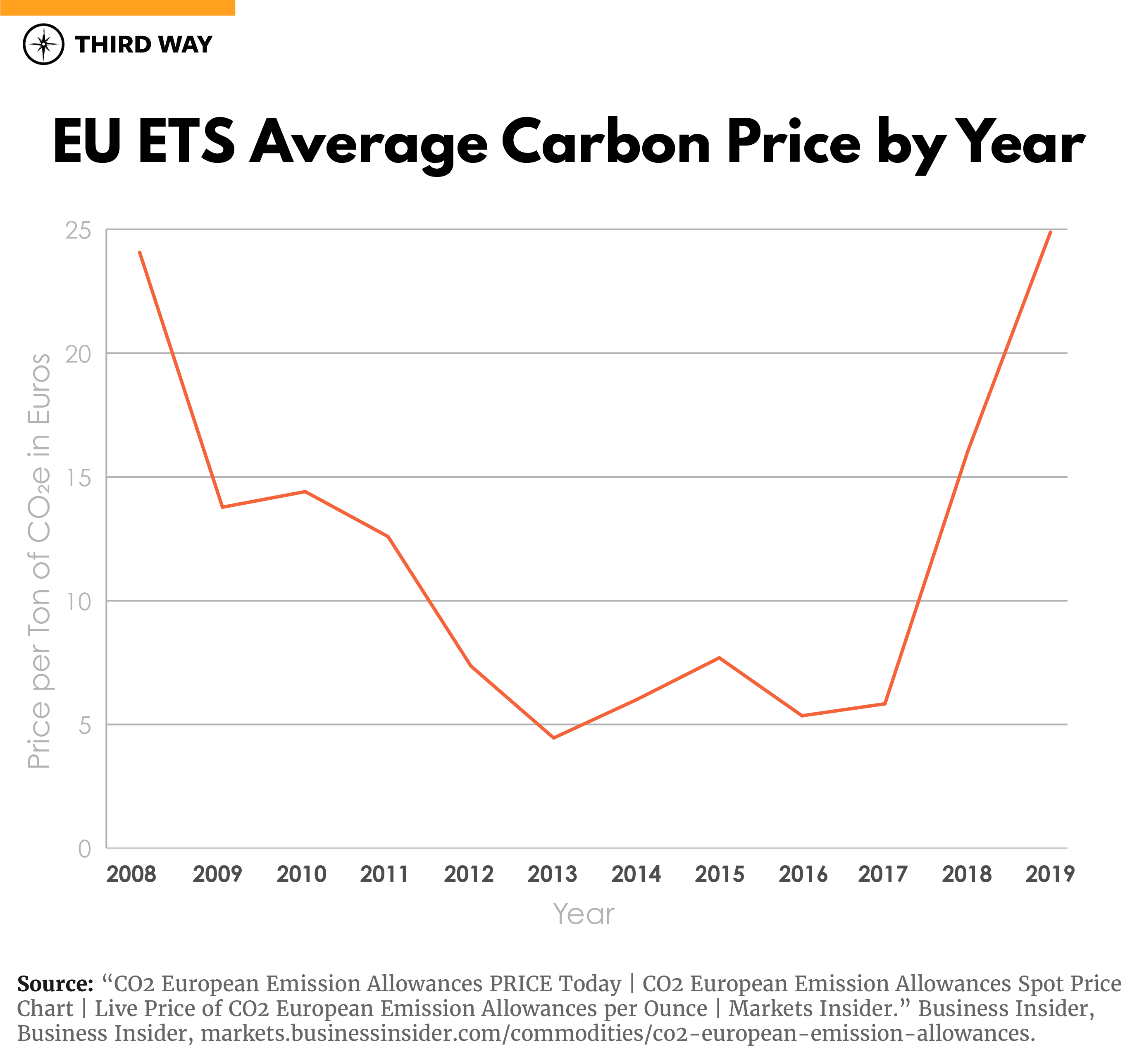 Figure 2: The carbon prices in the European Union Emissions Trading System per year, starting in 2008 at 25 Euro per ton of CO2e. Despite expectations of the carbon price increasing over time, prices dropped for most of the policy’s lifespan

One of the strengths of carbon pricing policies is that they incentivize polluters to find the lowest-cost ways to reduce their emissions. Such economy-wide policies concentrate efforts in the easiest-to decarbonize-sectors. As a result, the majority of emission reductions from carbon prices are happening in the power sector. Studies show that this will remain true not only for today’s relatively low carbon prices, but also if there were more ambitious federal carbon prices.25

Climate scientists have made clear that we must decarbonize every single sector of the economy by 2050. Focusing on power sector emissions reductions today without cutting emissions in industry, transportation, agriculture, buildings, and other sectors will make them harder to decarbonize tomorrow. This is because the deployment of new clean technologies and infrastructure, although initially expensive, is key to reducing their cost in the future, as we learned with solar technology.26

Since the implementation of the first carbon prices, other policies, like clean energy standards, have had a better track record of reducing emissions. For example, in jurisdictions like British Columbia and the European Union that have both a carbon price and a clean energy standard/directive, studies find that although emission reductions from carbon pricing were certainly cheaper, other standards and directives led to the bulk of emissions reductions.27

Although the California cap-and-trade program is the backbone of their climate policy mix, it still produces smaller emissions reductions than the performance standard policies intended to complement it.28Figures 3 and 4 show that although most of California’s performance standards have a higher cost per ton of CO2e reduced than its cap-and-trade system, the standards have driven substantially higher emissions reductions. 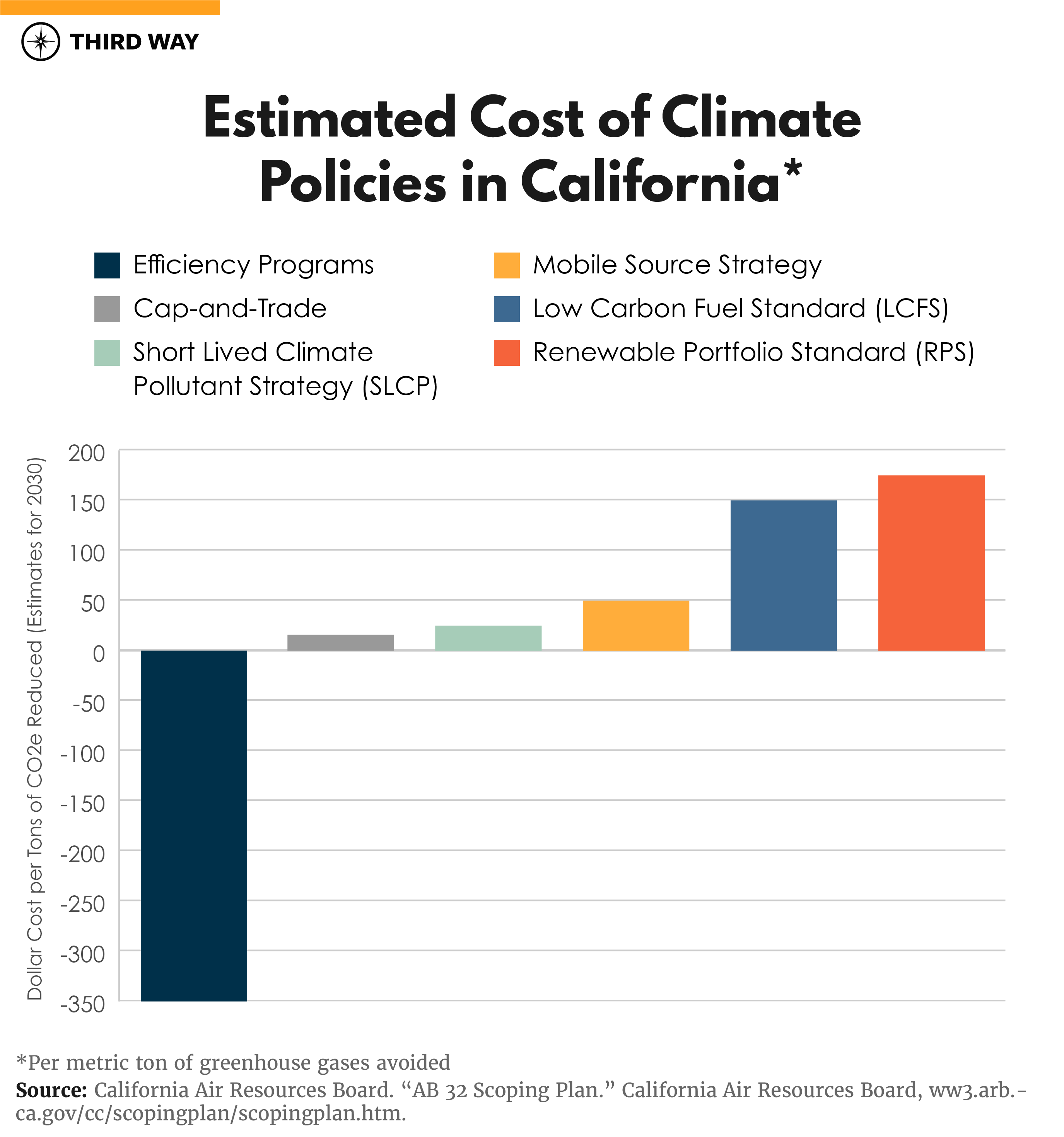 Figure 3: The cost per ton of greenhouse gas emissions reduced of different climate policies in California. The cap-and-trade program is the most cost-effective, excluding the energy efficiency programs. The latter result in negative costs as energy savings from efficiency programs generally outweigh the cost of implementing them. 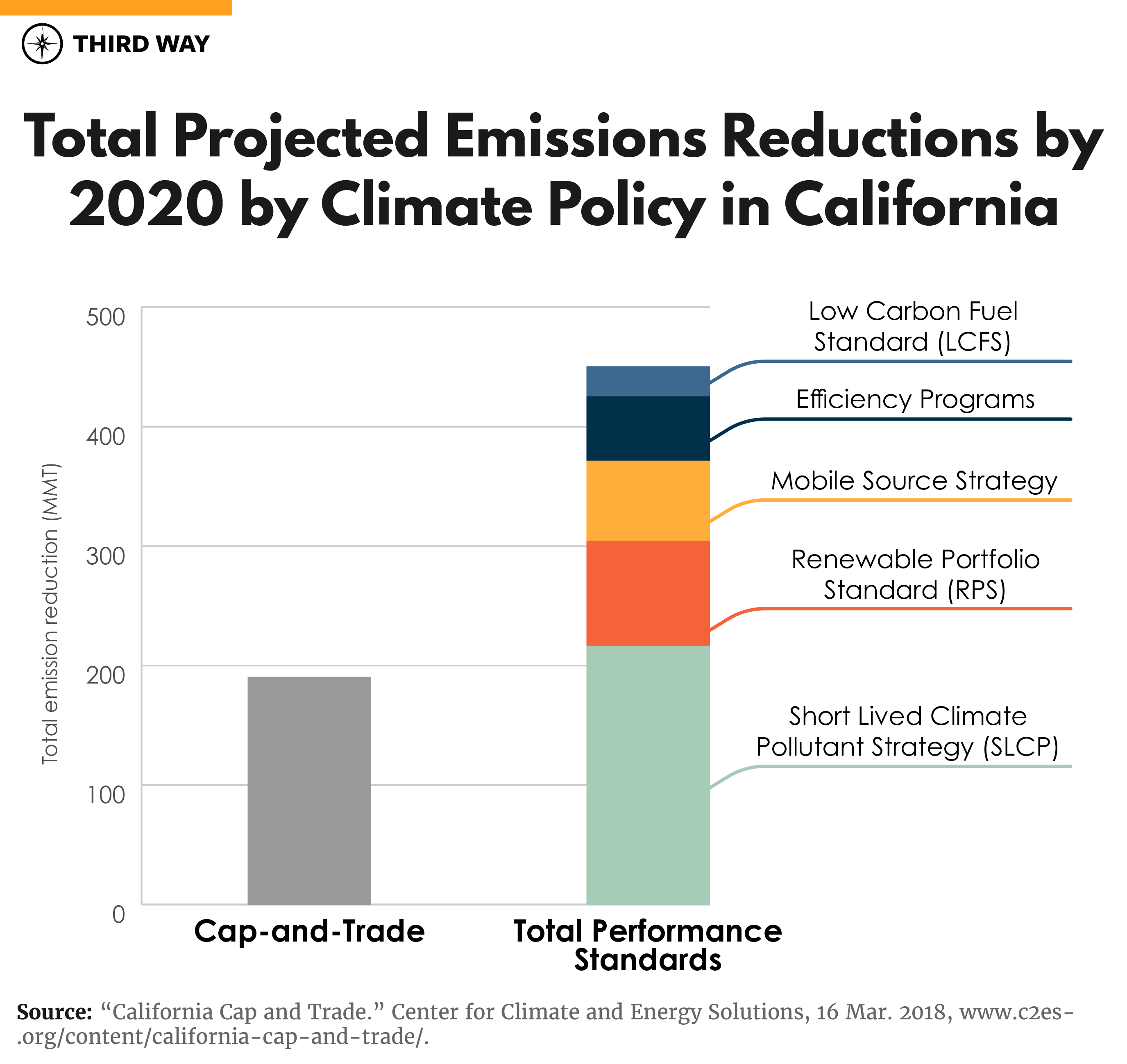 A Comparison with Performance Standards

Performance standards have driven greater emissions reductions in large part because public support for these policies has surpassed that of ambitious carbon prices. In the United States, policymakers have had to fight lengthier political battles to enact carbon pricing efforts like the Regional Greenhouse Gas Initiative (RGGI) and California’s cap-and-trade, compared to clean or renewable energy standards in the same states. A carbon tax failed to pass in Washington state twice,29 while renewable or clean energy standards passed in red states like Arizona, Iowa, Montana, and Texas. Today, only 10 states have carbon pricing policies, while 30 have a clean or renewable energy mandate (plus the District of Columbia and Puerto Rico).30

Beyond political support, clean energy standards have also performed better in another crucial aspect: preventing carbon lock-in. Carbon lock-in is a form of path-dependency that occurs when we invest in fossil fuel-dependent assets (like natural gas power plants) that must run for decades to justify the investment, dissuading investment in low- or zero-carbon substitutes. This is important because it is increasingly evident that to meet our climate goals, we need to build as little fossil fuel-dependent infrastructure as possible. Carbon pricing lets plants and industrial facilities rely on rapid, on-site emissions reductions, which in many cases are cheaper than replacing current infrastructure. Clean energy standards, on the other hand, specifically mandate that stakeholders deploy clean technology that displaces future fossil fuels.

After 15 years of carbon pricing, we are seeing that theory and practice do not always align. The real world is complex, and we cannot ignore that policies always face important regional, institutional, and political constraints. These mechanisms exist in a messy web of regulations from past administrations. Carbon pricing is an important part of the solution. But given the success of other policies with solid track records that incite less political hostility, it is important not to ignore the evidence we currently have.

We should not abandon carbon-pricing policies. On the contrary, they have shown their role in incentivizing efficient emissions reductions and creating revenue. They are a valuable addition to the climate policy mix. But we cannot lose sight of the magnitude of the climate crisis and the need to transform the economy. Completely decarbonizing by 2050 at the latest will require more than marginal emission reductions.

Let’s keep working for stronger and higher carbon prices, and retain and build upon other policies that are already working. Carbon pricing remains a key part of a broader policy mix, keeping in mind that unless their prices rise dramatically, most emission reductions will come from other policies.