A Response to the National Education Policy Center: "NEPC review is fatally flawed"

Writing for the NEPC, Dr. Bruce Baker attempts to discredit the findings of our report, “Incomplete: How Middle-Class Schools Aren’t Making the Grade.” His review is deeply flawed and significantly misrepresents our data and findings.

Among the most grievous errors:

Below is a point by point refutation of his major claims.

1. The NEPC asserts that there is no “expectations gap” between the performance that parents and taxpayers expect from middle-class schools and what they get.

“The data that are cited [in the Third Way report] fail to make the case that ‘middle-class’ schools perform less well than expected.” (p. 2)

Here are the facts:

The vast majority of parents with kids in school give their schools high grades and expect their kids to go to college, but the facts on the ground show mediocre test results and too few degrees. That’s the definition of an expectations gap.

2. The NEPC labels our link between college degree attainment and higher income “speculative” and dismisses highly credible sources and institutions as non-serious.

The data we use are from the following respected and cited institutions:

It’s true; none of these sources are academically peer-reviewed, but many—including us—consider them to be serious, thoughtful, and reliable.

Suffice it to say, we are comfortable with the company we keep and the sources we cite.

Below is a chart illustrating the median household incomes of Americans from 1975 to 2005, sorted by educational attainment in inflation-adjusted dollars.5 Readers can determine for themselves whether this is sufficient data to make the case that educational attainment has some bearing on personal and national wealth. 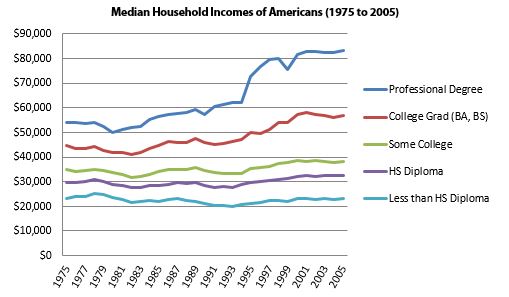 3. The NEPC either misreads or misstates the report’s expectation for middle-class school performance.

”There is no clear statement of what the expected performance of middle-class schools should be.” (p. 2)

We’re very clear on what the standard should be. We say that middle-class schools must be “college factories.” It is stated on pages 1, 3, and 13—in the Executive Summary, introduction of the paper, and in the conclusion. Our major finding is that college graduation rates for students attending middle-class schools are far too low. We believe that there should be a considerable national focus on significantly increasing these college graduation rates. We are not sure we could be clearer.

4. The NEPC defines middle-class schools out of existence.

“The Third Way authors seem to have taken this statement [that the middle two groupings of NSLP are seldom discussed] as a challenge to go where no researcher had gone before…. It is one thing to isolate the highest and lowest ‘quarter’; it is quite another to define all schools between them as ‘middle class.’” (p. 6)

There is a paucity of scholarship on middle-class schools. As such, there is not a ready-made definition. But we believe that eligibility for a reduced or free school lunch provides a fair, reasonable, and accurate proxy.

If these are not middle-class schools, it begs the question, “Which ones are?” This is not something Dr. Baker deigns to address in a meaningful manner. In fact, most disturbing for us in reading Dr. Baker’s critique is that there seems to be no interest and no perceived utility from defining middle-class schools and seeing if the performance of these schools is good enough. He argues that the 55% of all data that was collected by the U.S. Department of Education and represents the 2nd and 3rd groupings is not of value. We find a wealth of value in this trove of information.

5. The NEPC makes a fatal error in how it describes our definition of middle-class schools with regard to student performance.

“Why [Third Way’s definition of a middle-class school] is a poor choice is illustrated later in this section of the review, but here’s a teaser question to keep in mind: Do you consider Detroit to be middle class?” (p. 6)

For purposes of individual achievement on test scores and college attainment, for teacher-student enrollment ratios, and for teacher salary, we do not consider entire school districts such as Detroit, Los Angeles, Philadelphia, Baltimore, Memphis, or Houston to be middle class. Our report disaggregates the schools within school districts by using their student body’s percentage of eligibility for the NSLP and follows only those that fall within the second and third groupings of usage. This makes an enormous difference as evidenced by what it would mean for Dr. Baker’s chart on page 7 where he lists big (and presumably failing) urban school districts and claims that “tossing truly middle-class districts in a pool along with large (and largely poor) urban districts tends to shift the results to the latter.” (pp. 7-8) In fact,

Need we go on?

This is what Dr. Baker called “the crux of the problems with the report’s methods…” (p. 4) It appears, thus, to be his most damning piece of evidence against our methodology, but either deliberately or mistakenly, he profoundly misinterprets our data.

Assuming his grave error was not deliberate, his confusion may stem from the fact that we did lump schools and school districts together when looking at overall school spending and median incomes of school districts. We drew absolutely no central findings from this aggregated data.

We disaggregated the schools from their districts for: race and ethnicity, school population, urban, suburban, and rural location, teacher salary, teacher-student enrollment ratio, and most importantly, NAEP achievement and college attainment.

Dr. Baker’s critique is an egregious misrepresentation of our data and what we wrote in the paper.

6. The NEPC offers no data to refute our finding on low college graduation rates from middle-class schools.

“As noted previously, the authors’ main conclusions focus on the alleged failure of middle-class schools to produce college graduates.” (p. 5) (emphasis ours)

Our paper asserts that only 28%, or roughly one-out-of-four graduates from middle-class high schools, will attain a four-year college degree by age 26. Although he does quibble with our methodology, Dr. Baker offers no refutation of that figure in his 12-page critique. This is the major finding of our paper, and since he was not shy about criticizing other aspects of our paper, we must assume it is because he believes we are essentially correct.

When one looks at facts from some unimpeachable sources—the U.S. Census Bureau and the U.S. Department of Education—it is clear why.

Our conclusion can be supported or corroborated using a number of data sources. Whether one looks at the two middle groupings of National School Lunch Program data to define middle-class schools, just the second grouping of this data, or raw Census Bureau Data for the entire population of 25 to 29 year-olds in America the bottom line doesn’t change—the rate of four-year college degree attainment is far too low and remarkably similar across measurements.

There are 52,860 public and charter schools15 that fall within our definition of middle-class schools, and they educate 25.7 million16 students. The message from Dr. Baker and the NEPC seems to be—let’s ignore them. In fact, let’s not even define them. Our view is that there is immense potential out there. These schools are failing in their basic mission—to become college factories.

From our perspective, college graduation rates of 31% and 23% in the second and third NSLP groupings, respectively—as our report presents—are unacceptable for America’s economic future. Clearly, the NEPC and Dr. Baker disagree and are satisfied with the status quo. We are not.