A Cost Cap for Medicare Beneficiaries

We must do more to protect older and disabled Americans from high health care costs. Third Way has previously called for Congress to enact a cost cap that would limit premiums, deductibles, and other out-of-pocket costs for everyone based on their income—no matter where they get their insurance. This idea builds off the Affordable Care Act (ACA), where most people buying coverage through the exchanges have caps on their premiums and out-of-pocket costs. This means they won’t pay more than a set amount on health care costs in a certain year, no matter what services they need.

As Congress works toward capping costs for everyone, a good first step is to target the Medicare population and build costs caps in to the popular federal program. As part of the consideration of H.R. 3, the Lower Drug Costs Now Act of 2019, Reps. Andy Kim (D-N.J.), Dwight Evans (D-Pa.), and Lisa Blunt Rochester (D-Del.) proposed just that. Their proposal would introduce a comprehensive income-based cost cap for low-income seniors.3 Coverage for vision, dental, and hearing in Medicare is also a critical part of a cap.4 This policy brief explores why that effort is so important by outlining the gaps in Medicare coverage and how a cost cap would address those problems.

The Problem: Gaps in Coverage under Medicare

Typically, Medicare pays for 73% of an individual’s health care costs without factoring in any other supplemental coverage (compared to 83-85% for typical employer plans).5 Because of that, most beneficiaries have some source of supplemental coverage, which could be a Medigap plan, a Medicare Advantage plan, a prescription drug plan, a low-income supplement known as Medicare Savings Programs (MSP), or various combinations. Within that structure, however, Medicare has two major gaps in coverage:

First, Medicare doesn’t have a limit on costs for very expensive drugs in Medicare Part D. This gap stems from the lack of coverage for beneficiaries whose personal spending on drugs exceeds the current $5,100 limit. After reaching that annual limit, individuals must continue to pay 5% of the cost for each drug.6 That leaves older and disabled Americans—particularly those with multiple chronic conditions or expensive specialty drugs—unprotected. A maximum out-of-pocket limit simply does not exist, except for low-income beneficiaries through the Low-Income Subsidy Program.

Second, Medicare doesn’t have an out-of-pocket limit on health care costs for low- to moderate-income beneficiaries. This other gap affects individuals who are not eligible for MSP. Currently, MSP provides supplemental coverage for beneficiaries with incomes up to 135% of the federal poverty level. This supplement covers a beneficiary’s share of Medicare Part B premiums, which pays doctor bills. For beneficiaries living in poverty, it also covers out-of-pocket costs. Not only is the level to qualify for MSP very low (135% of the federal poverty level is less than $16,400), but too few people are enrolled (as shown in the chart below).7 Specifically, half or more of eligible beneficiaries are not enrolled or cannot enroll due to limits on enrollment slots. This results in a range of enrollment rates—from 29% of eligible participants in West Virginia to 78% of eligible participants in Maine.8 This gap is made worse by the lack of Medicare coverage for dental, hearing, and vision care. Medicare beneficiaries often pay out-of-pocket for such care. 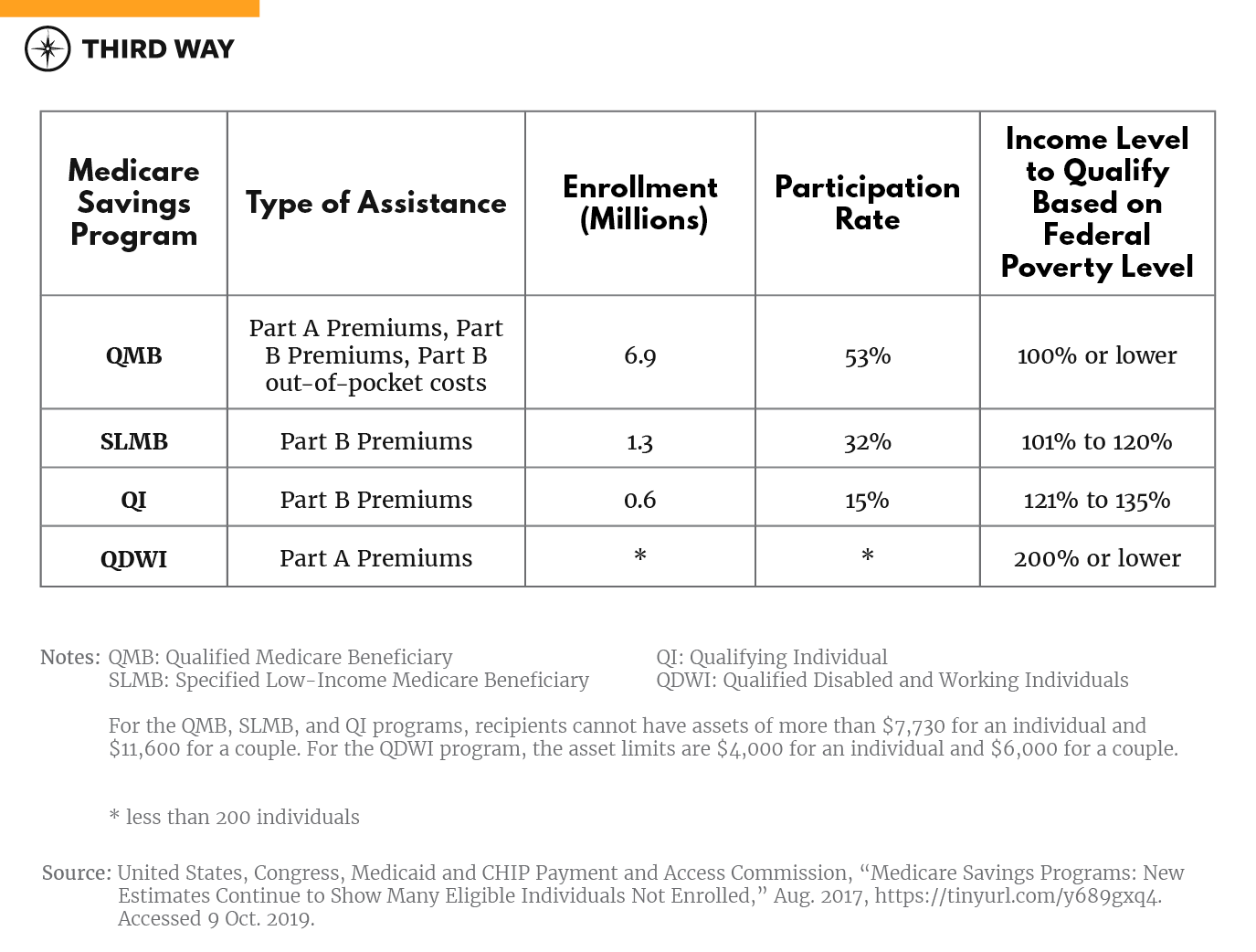 These two gaps in coverage have serious financial and health consequences for beneficiaries.

The Solution: A Cost Cap for Medicare

Medicare beneficiaries should have protection from high premiums and out-of-pocket costs based on their income. Current cost protections for Medicare beneficiaries, however, are either missing or inadequate. For example, a beneficiary with an income of $16,389 (which is 135% of the poverty level) must pay as much as 17% of their income on out-of-pocket expenses, depending on how much care they need during a year.20 In contrast, a beneficiary with a $48,500 income (400% of poverty) pays only 6%. The Kim-Evans-Blunt Rochester proposal would improve Medicare cost protections through the Medicare Savings Programs, which covers beneficiaries’ hospital and doctor costs under Medicare Parts A and B as show in the chart below. 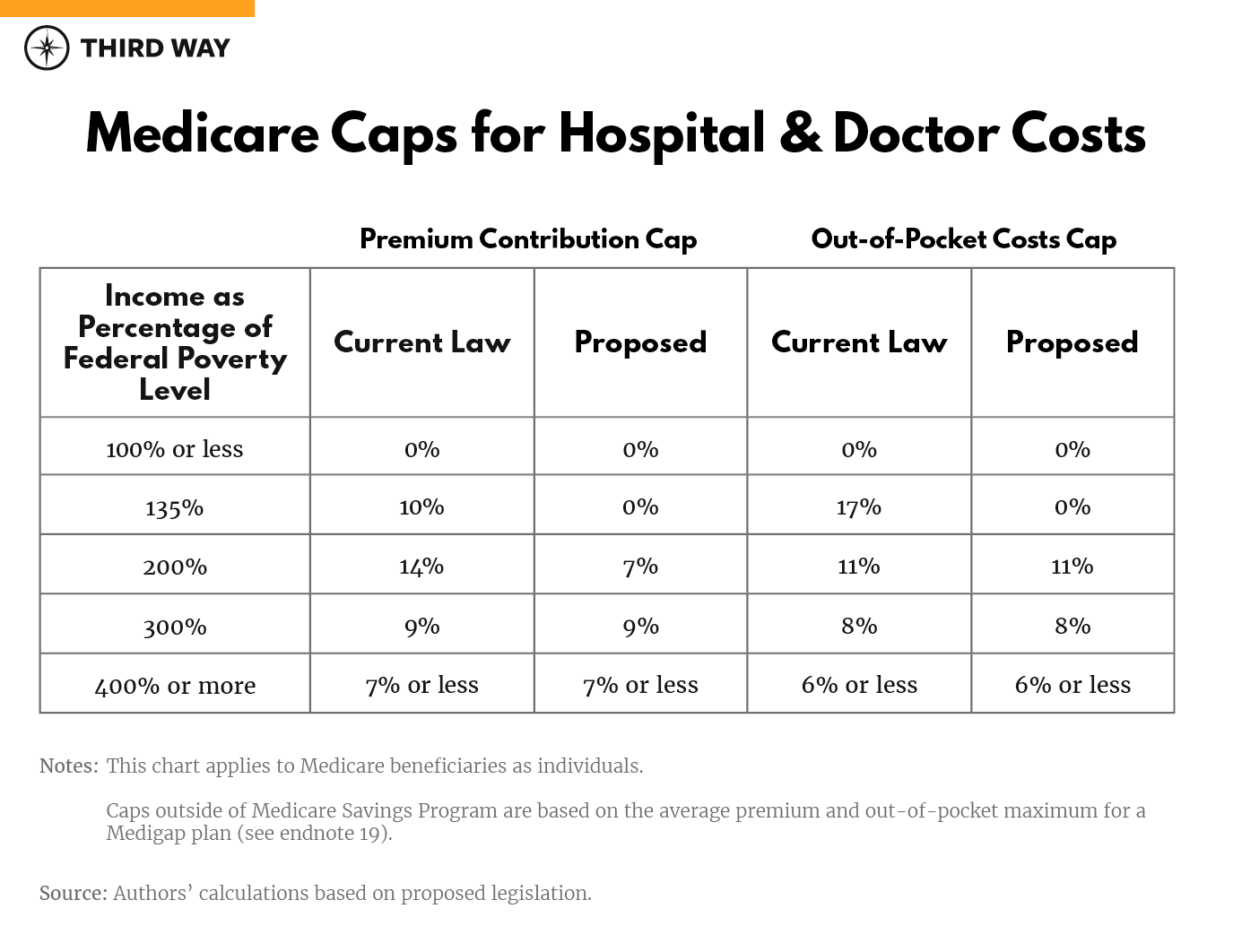 A comprehensive cost cap for Medicare would protect older and disabled Americans through four key provisions: 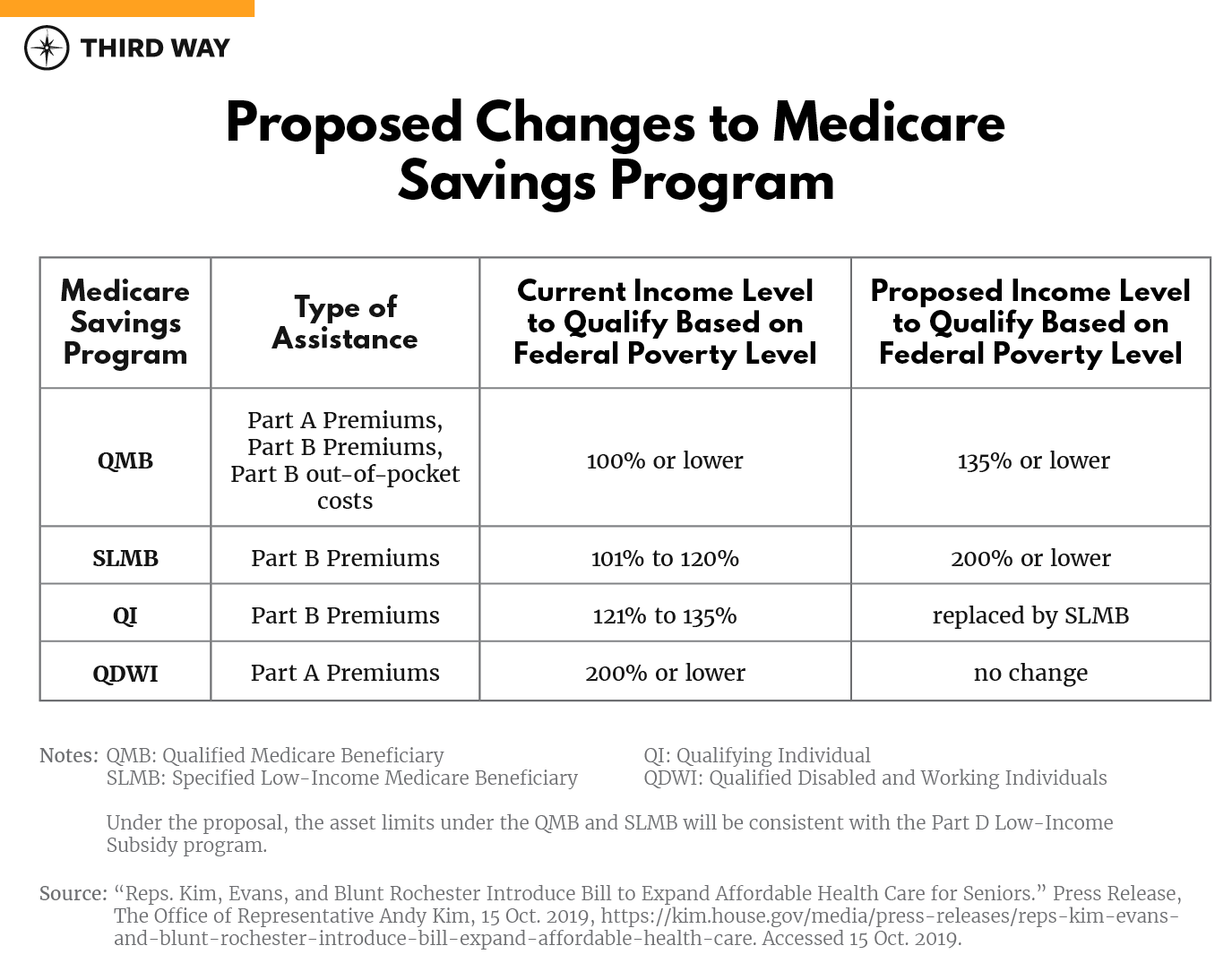 The proposed financing in the House bill for a cap on all costs would be fairer if it targeted a broader array of wasteful spending beyond just prescription drugs. Studies show that at least 11% of Medicare spending is wasteful and could be cut without reducing patient outcomes.23 As the House moves forward, we urge Congressional leaders to keep a cost cap and broaden the sources of financing.