Everything You Need to Know About America's Advanced Nuclear Resurgence

In the upcoming months with COP21 in Paris and a number of other large scale climate-centric events, there will be much discussion about the role of nuclear power in a climate change solution.

We created this as a resource with key facts about the advanced nuclear industry in the United States, explainers about the financial and regulatory obstacles for the newest generation of advanced reactors, and policy ideas to resolve them.

Young nuclear pioneers, supported by over $1.6 billion in private capital, are working to develop safe, carbon-free advanced reactors right here in the U.S.

An outdated and simplified picture of traditional nuclear reactors misses a hotbed of innovation that is occurring today. Third Way’s Josh Freed introduces the engineers and companies driving these game-changing technologies in Back to the Future: Advanced Nuclear Energy and the Battle Against Climate Change (The Brookings Essay, December, 2014). Talented nuclear engineers like Leslie Dewan are exploring safer and cleaner nuclear energy technologies as the best option for powering the world and addressing the looming threat of climate change.

The promising innovations are attracting both startups and big-name investors like Bill Gates, who are all placing bets on a nuclear comeback, hoping to get the technology in position to win in an increasingly carbon-constrained world. This infusion of capital is supporting over 48 companies and organizations in North America that are working to commercialize innovative and advanced nuclear reactors in the U.S. and Canada.

Third Way introduces the advanced nuclear industry in North America in The Advanced Nuclear Industry (June 2015). The report includes the most comprehensive set of details about who’s working on these reactor designs and where. We describe the money and momentum building behind advanced nuclear, and how the technology has evolved since the Golden Age of Nuclear to show that this technology may be the best opportunity we have to address climate change and meet the world’s growing energy needs. 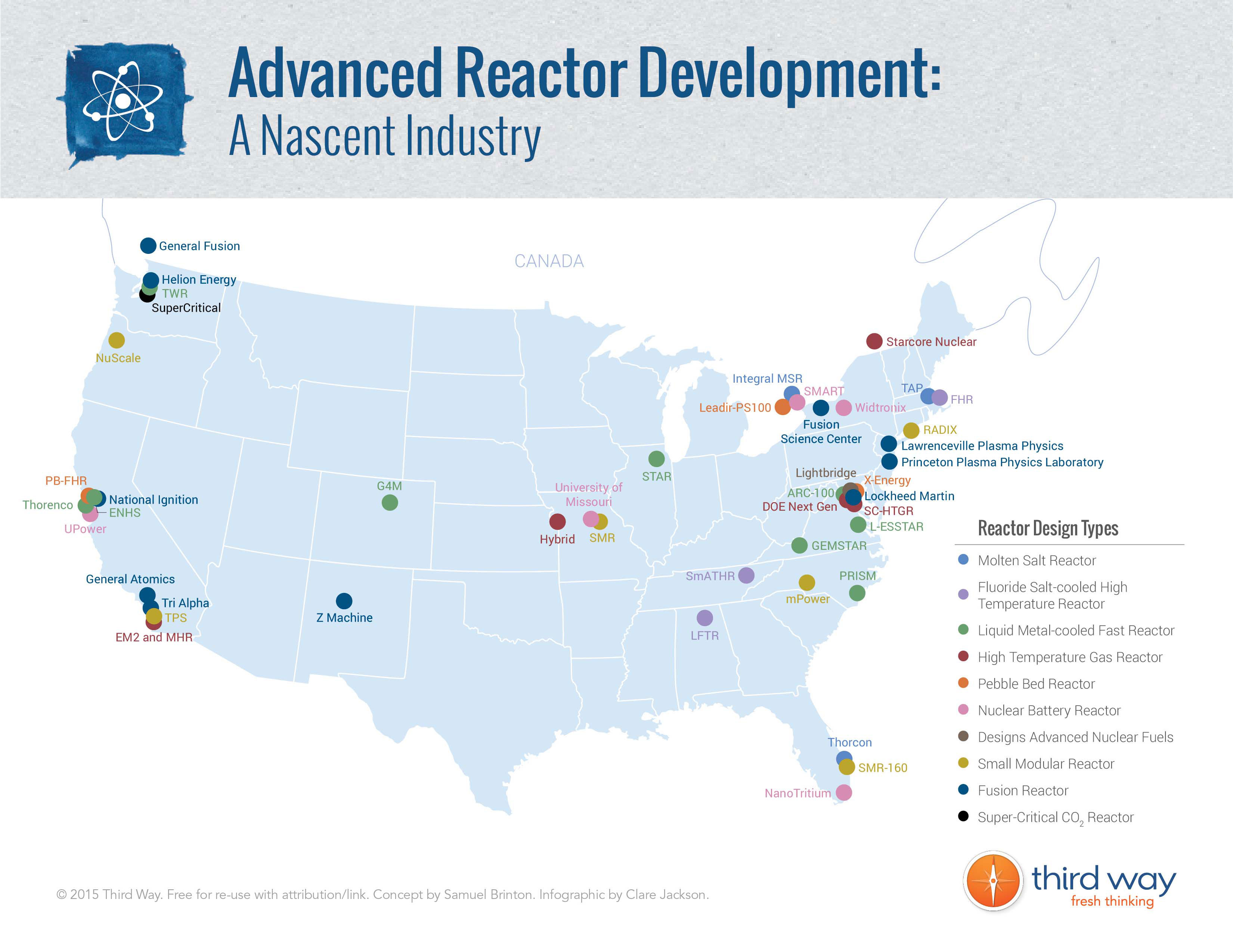 Renewable sources of energy are important in the national and international effort to reduce emissions and fight climate change, but we cannot meet our climate goals without nuclear energy in the portfolio.

Nuclear power currently provides electricity to one in five homes in the United States. But this carbon-free energy source faces extreme economic challenges led by badly designed energy markets that are leading to the premature closure of reactors.

The Economist captures the paradox of the nuclear energy industry in “Half Death”:

"Perversely, at a time when countries around the world are pledging to cut carbon emissions, such closures often lead to the burning of more fossil fuels. Adding renewable-energy capacity does not solve the problem: when the wind doesn’t blow and the sun doesn’t shine, nuclear energy still provides the best low-carbon source of reliable “baseload” electricity."

What will happen to carbon emissions if more reactors shut down? In coordination with MIT-trained researchers, Third Way modeled that question for our report, When Nuclear Ends: How Nuclear Retirements Might Undermine Clean Power Plan Progress (August 2015). Regardless of the scenario we ran, the answers were dire.

Not only could we fail to meet our emissions targets under the Clean Power Plan if nuclear power plants close, but we could also see a return to the record-high carbon levels of 2005 in the worst case scenario—wiping out a decade of progress.

Advanced reactors are built differently than traditional nuclear reactors and, like most innovative technologies, will require government support and a viable pathway to licensing to be deployed.

Just as some companies require supercomputers and other companies require laptops, the next generation of nuclear engineers are designing advanced and innovative reactors to provide different types of power for the very different energy needs around the globe. In Nuclear’s Continuing Evolution (March 2015), we outline the basic characteristics of each design to illustrate the technological advances that have occurred and will occur over the next few decades. 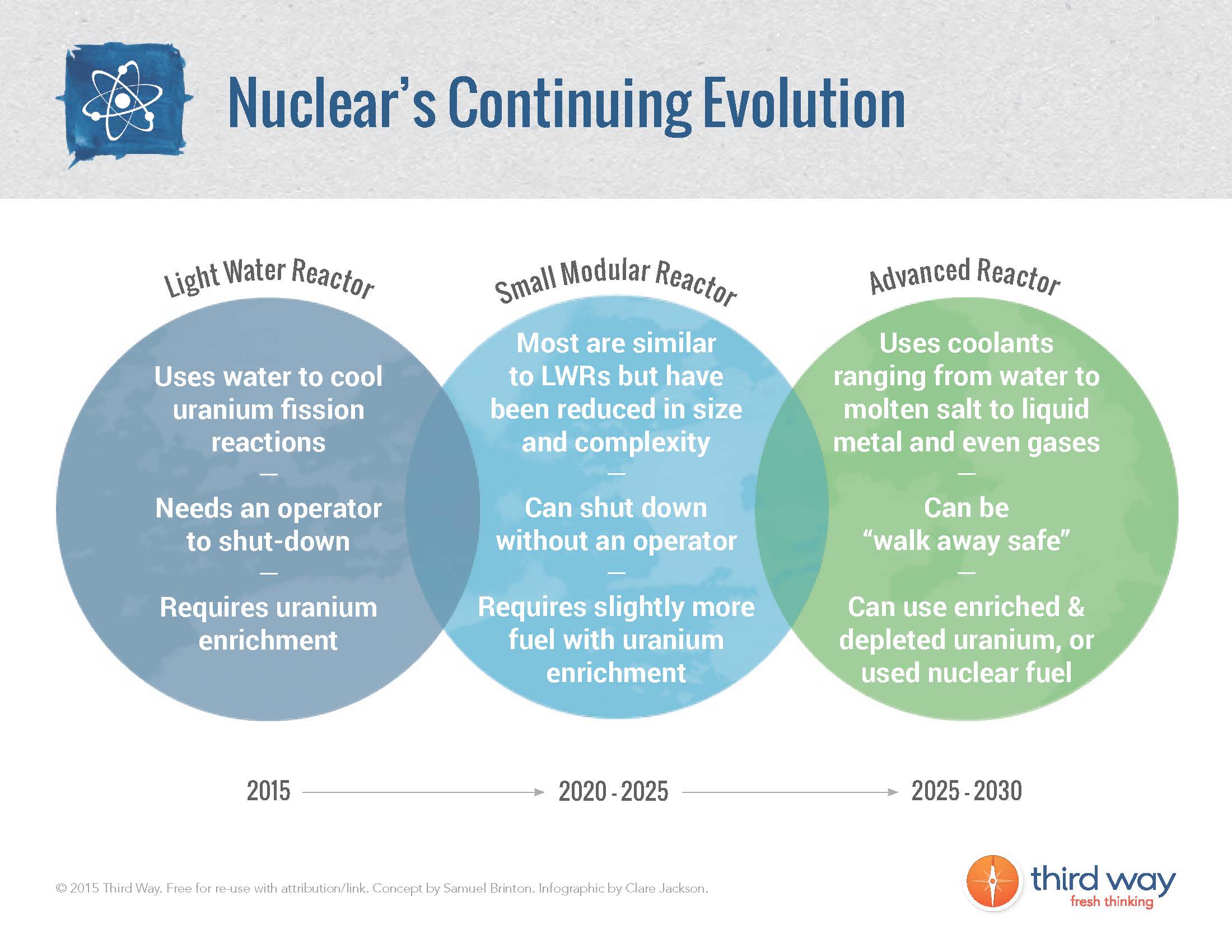 As the infographic shows, advanced reactors have very different characteristics compared to traditional nuclear facilities built decades ago. Unfortunately, this has created a significant regulatory roadblock for the advanced nuclear industry: there is no timely pathway for the federal government to approve the license for these new, very different reactor designs.

To support these emerging reactor technologies, Third Way recommends a doubling of the research budget of the Nuclear Regulatory Commission’s (NRC) Office of Nuclear Regulatory Research for FY 2016 in our report Regulating New Types of Nuclear Reactors (July 2015). That funding should support the expedited review of advanced non-light water reactors. With more staff time dedicated to studying advanced reactors, the NRC can be ready to license the new types of nuclear reactor when the industry is ready to begin building, testing, and deploying them.

If we fail to support advanced nuclear technology, these groundbreaking facilities will be built outside the U.S.

Richard Martin documents the significant barriers for advanced nuclear technology in the MIT Technology Review, and warns the stakes are high. “The net effect of the regulatory sclerosis in the U.S. is to force companies offshore,” Martin writes.

TerraPower, the startup funded in part by Nathan Myhrvold and Bill Gates that is focused on a novel machine known as a traveling wave reactor, signed an agreement in September with the China National Nuclear Corp. to build a prototype unit in China. Other U.S.-based startups have indicated their intention to find more nuclear-friendly countries in which to prove their technology.

The latest news on the advanced nuclear industry