After months of negotiations, it looks like Democrats in Congress are finally ready to strike a deal on the Biden Administration’s signature reconciliation package, the Build Back Better Act (BBB Act). As details about the legislation continue to emerge, big questions remain about which items will make it into the bill and at what funding level. For higher education advocates, the BBB Act offers a once-in-a-generation opportunity to shore up much-needed federal funding to make college more affordable and attainable for students looking to remain competitive in today’s economy.

And while every issue area is vying for its piece of the pie, new polling from Third Way of 1,000 likely voters in Frontline districts (Congressional districts represented by a Democrat that the DCCC has identified as competitive in 2022) makes clear that voters across the political spectrum believe that higher education deserves a large slice of this deal.1

In fact, higher education priorities, like investing in college programs that prepare graduates for the workforce and reducing the amount of debt students take on, test just as well or even better than some of the most well-known and popular reconciliation proposals, like Medicare expansion (91% support) and allowing Medicare to negotiate with drugmakers (91%). 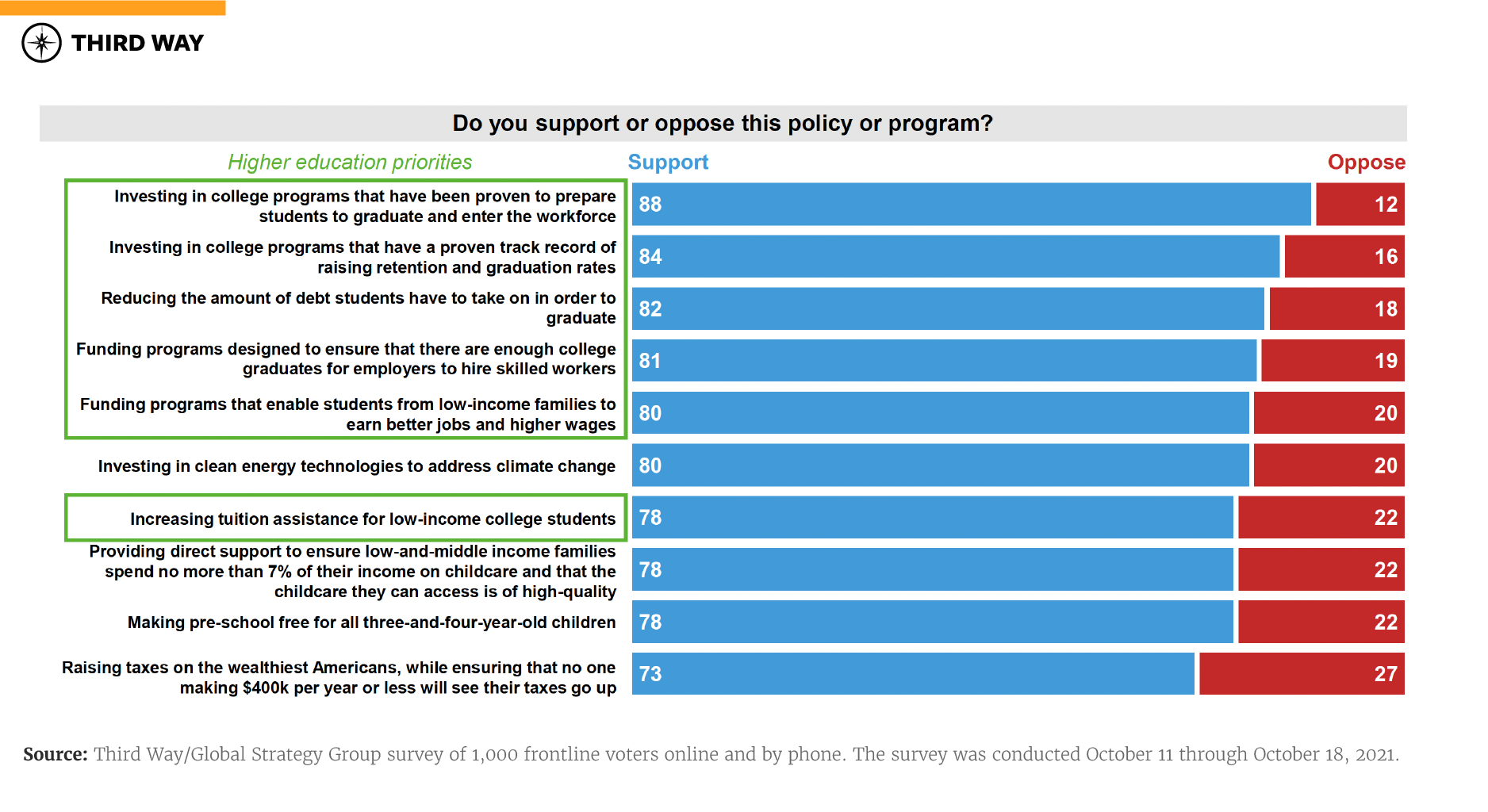 And when thinking specifically about the Democrats who are brokering deals, voters in Frontline districts indicated by a 2-to-1 margin that they prefer to support a Democrat who is actively fighting to secure additional funding for higher education.

Notably, this desire for increased investment isn’t just reserved for the affordability priorities that get more airtime like tuition-free community college. Eighty-two percent of voters in these districts agree (47% strongly) that, “We must address our challenges in higher education from all angles. That means we shouldn’t only focus on making higher education more affordable, but we must also make sure programs are in place that improve graduation rates, so that students are able to earn a living and support their families.” That’s why nearly three-quarters of these voters (72%) support Congress “investing in programs to improve college student graduation rates,” a nearly identical rate of support (76%) as those who agree “Congress should make higher education more affordable to low-income and middle-class Americans.”

Congress could make this voter priority a reality by investing the proposed $9 billion in a first-of-its-kind College Completion Fund (CCF). This fund is designed to address the fact that colleges don’t graduate nearly 1 in 2 students who attend by scaling evidence-based programs like CUNY ASAP that are proven to increase graduation rates by double digits: investing in student supports like high-touch student advising, tutoring, career services, childcare, and subsidized transportation. And as our survey demonstrates, support for this type of investment holds up to criticism.

As Democrats wrap up their negotiations on Build Back Better, they would be wise to heed the advice of the voters who are poised to determine the future of the Congressional majority come 2022. And if our new poll makes anything clear, it’s that these voters do not see investments in higher education as expendable—and they see the need for the shift to focus not just on getting students to college but making sure they successfully get through it. Investing in programs that boost both affordability and completion will not only lead to significant improvement in higher education outcomes from coast to coast but also signal an important step forward in delivering on President Biden’s promise to make our higher education system work better for all.