Five Facts About Workers on the Margin

Part sixteen in the Series
The Economics of COVID-19 with Dr. Ellen Hughes-Cromwick
View Series

The Federal Reserve and Congress have laid out substantial measures to combat the devastation caused by the health and economic crisis. So far, they’ve provided support for workers, businesses large and small, and even modest help for state and local governments on the front lines.

But more needs to be done. And the longer we wait to combat this crisis, the worse this modern Great Depression becomes.

Last Friday, we learned that 20.5 million jobs were lost in the month of April. The US Department of Labor reported that the unemployment rate rose over 10 percentage points from 4.4% to 14.7%, which was closer to 20% when counting all the temporary layoffs that they found in their survey results.

Amid this horrendous report was an even more troubling fact: this pandemic and the economic crisis are having a far more significant effect on low-wage workers, people of color, people with less formal education, and veterans. We are seeing massive disparities in only two months’ time.

As if those divides were not large enough already, the health crisis has expanded the cracks. Here are five distressing facts from last Friday’s employment report for the month of April:

Even Federal Reserve Chair Jay Powell said on Wednesday this week that their own research found that 40% of households earning less than $40,000 lost a job in March. These April results in the chart below found that the largest declines in jobs were among those earning the least. The health crisis hit people who are on the edge. 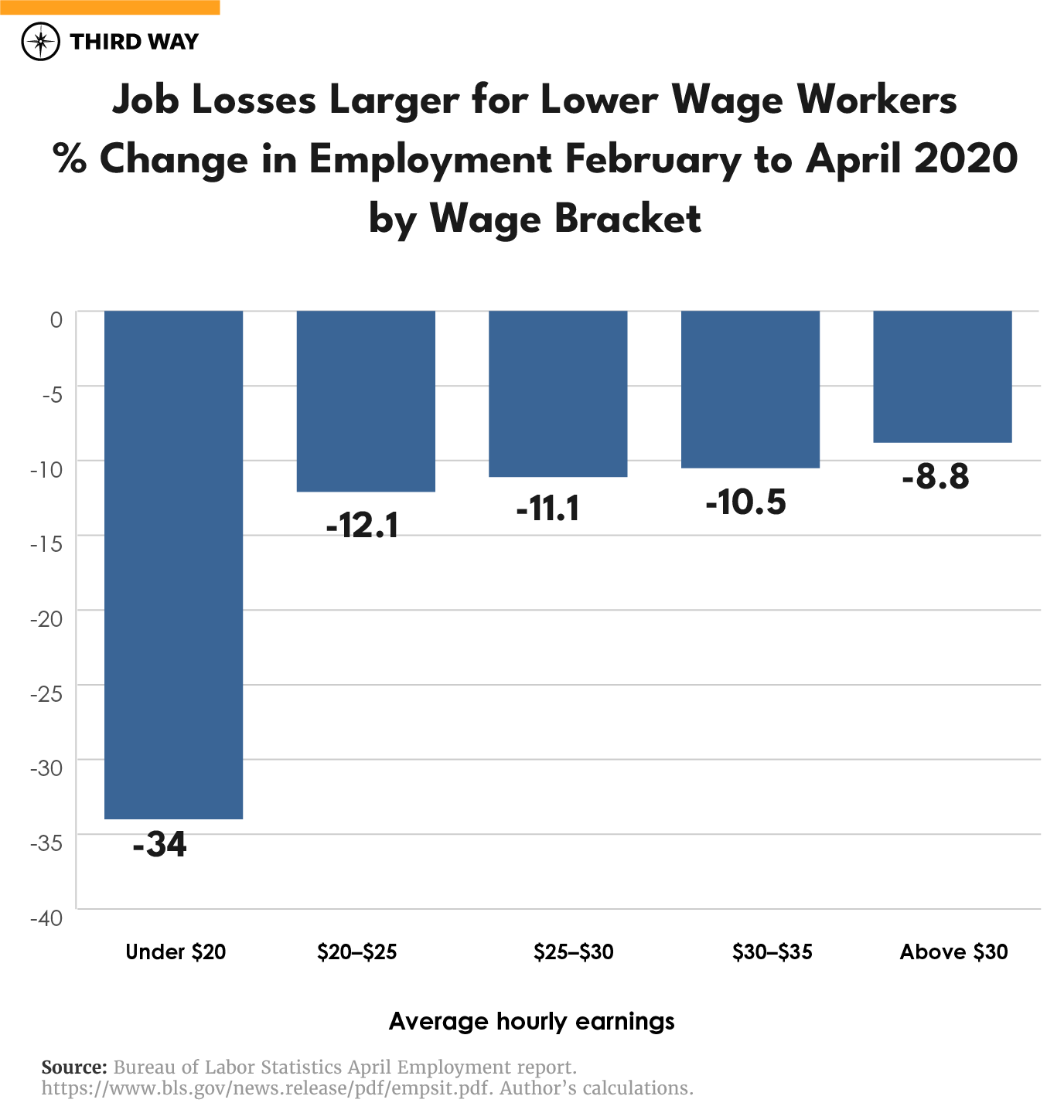 2. Nearly half of the 20+ million job losses last month were in the two lowest-paid sectors in the entire economy.

The average hourly earnings of those working in leisure and hospitality are less than $15 per hour, and not even $18 per hour in retail trade businesses. The job losses showed historic declines of nearly 10 million in these two sectors.

3. Unemployment rates of people without a high school degree and of Gulf War vets have risen much faster than those with postsecondary education. Hispanic/Latino and Black/African American unemployment rates also skyrocketed.

4. Huge swaths of those on temporary layoffs – which could turn into permanent job loss – would lift the unemployment rate to nearly 20%.

The Bureau of Labor Statistics used its standard practice of counting people as on “temporary layoff” if they said they were absent from work due to “other reasons.” Now, those reasons could turn out to be “permanent,” as in job loss. These people were not counted as unemployed, but rather “on temporary layoff.” Counting these people as unemployed would have added nearly 5 percentage points to the April unemployment rate of 14.7%.

5. By another definition, this broader unemployment measure reached 22.8% last month.

In other words, this measure is broader than the traditional U-3 unemployment rate. 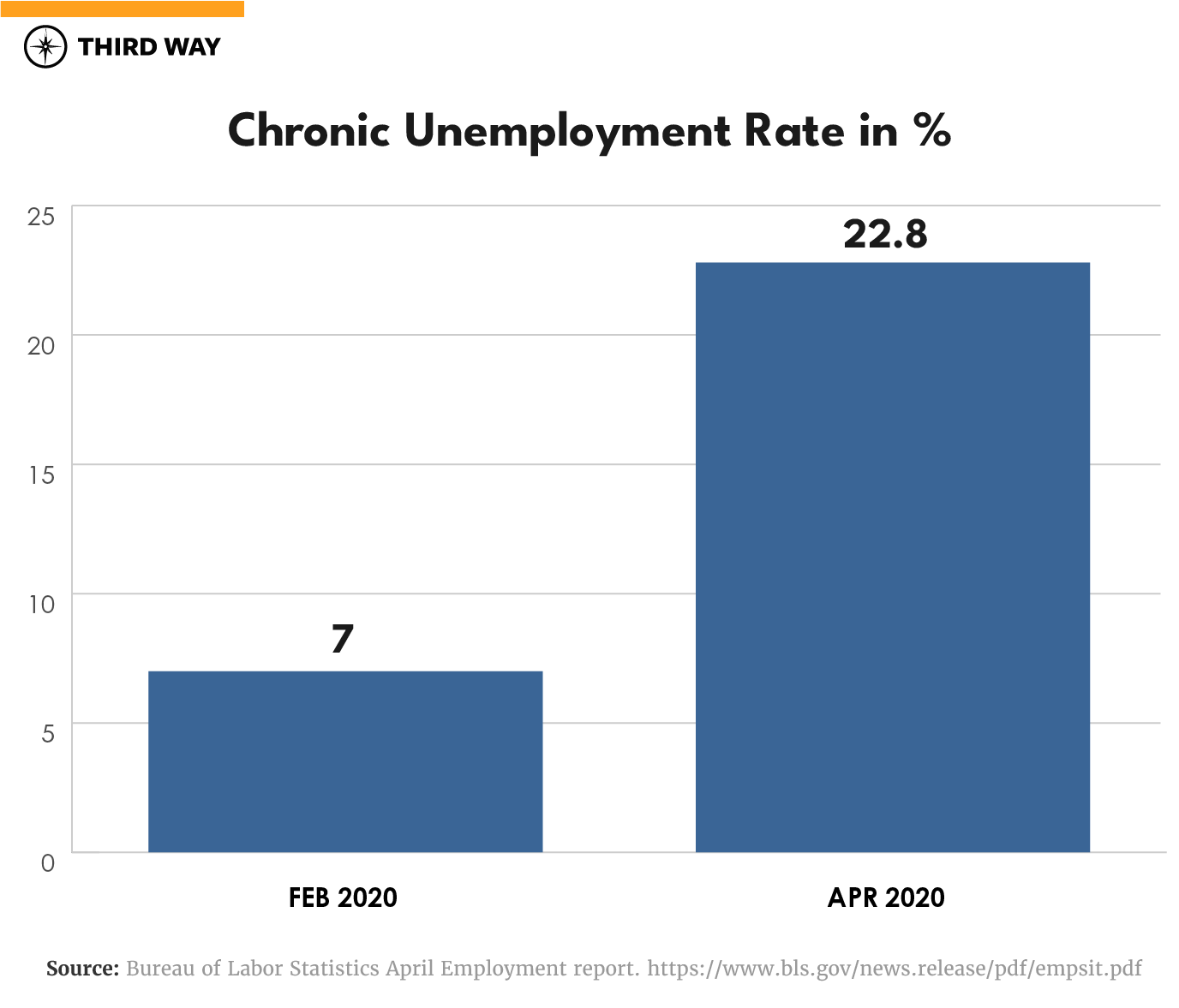 There is no stopping the Federal Reserve and fiscal measures taken to attack this problem. If there is one unifying theme, it is that there is a broad policy toolkit at our disposal. For example, the HEROES Act is big and bold at $3 trillion. It addresses many of the disparities highlighted here. It is a shot in the right direction, matching up to the challenge at hand. Without this kind of firepower, the unemployment spreading across the US will be more persistent in the months after the initial re-entry bounce. Simply put, if this crisis is left unchecked, if we start being complacent, if we begin to worry about deficits, then our nation’s setback will last years—maybe even a decade or more.