This digest does three things:

The financial situation with the current military health care system (known as TRICARE) is a recipe for crisis. If we don’t address it soon, it may harm our national security in the long run. It will also impact operational effectiveness and threaten health care benefits for active duty troops and their families.

Our troops are the foundation of American defense and have shown unwavering commitment over the last 10 years of war. In turn, it is a priority to ensure that health care needs of servicemen and women and their dependents are met. The nation is also committed to providing health care to those who spent their careers in military service. As a result, DOD administers health benefits to about 9.6 million active duty military members, retirees, and dependents through a system called TRICARE.1

Leaving aside the sacred obligation we have to America’s wounded warriors, health care costs are eating the Defense Department alive.

Before the mid-1990s, DOD had two ways of treating its beneficiaries, which included active duty military personnel, their families, and military retirees—troops who served a full 20-year career qualified for retirement. Those who served less than 20 years were eligible for care in the VA system. Typically, most DOD beneficiaries received health care at military hospitals or clinics known as Military Treatment Facilities (MTFs). Care at MTFs was free for Active Duty Military and their dependents, and to retirees on a space-available basis. Those who were not located close to an MTF received care through the Civilian Health and Medical Program of the Uniformed Services (CHAMPUS). But after the Cold War, DOD began a series of base closures which greatly decreased the number of MTFs. There was growing demand for care that military facilities could no longer provide.2 To cope, Congress created a new program in 1995 that became known as TRICARE.3

We must preserve TRICARE, but rising costs threaten DOD’s budget.

A vital truth about the TRICARE budget: Even though only 17% of the force serves 20 years to qualify for retirement, this group represents over half of all TRICARE beneficiaries, and because of their higher utilization rates, an even greater proportion of TRICARE’s costs.5 Still, the expansion of benefits and increased pool of those eligible for care could have been manageable if the cost-share between DOD and beneficiaries stayed the same, but it did not. 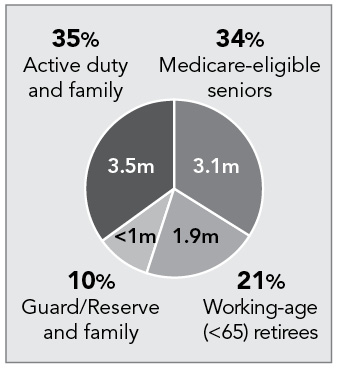 The Budget Control Act of 2011 will cause the DOD budget will grow at a slower rate than it has in the past 10 years. Those cuts don’t translate into smaller health care costs. Without reform, a bigger share of the Defense budget will go to health care costs and TRICARE will crowd out other DOD security spending priorities.

Increasing health care costs are crowding out other spending priorities.

In 2000, the Pentagon spent $17 billion on military health care.7 It nearly doubled by 2012 to $33.7 billion.8 Under the President’s FY13 budget proposal, minor cost controls will keep the budget at about the same level.9 But even with these minor cost controls the spending for the Defense Health Program will increase by $5.2 billion through 2017.10 Without reform, according to DOD estimates, spending on military health care could rise to $64 billion in 2015—a $30 billion increase over a shorter period of time.11 By comparison, that increase is three times the size of the Marine Corps’ entire Operations and Maintenance Account.12 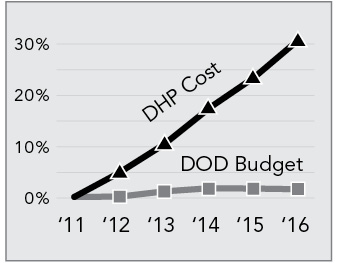 HMO-like plan where active duty personnel and their families are automatically enrolled free of charge. Retirees are eligible but required to enroll and pay an annual fee.

A fee-for-service plan that will cover costs not covered by Medicare Part B for seniors. Retirees can use Standard, but not Active Duty members.

Network benefit for retirees eligible for Standard. It is like a PPO.

Established in 2001 and is a secondary health care provider to Medicare for retiree seniors.

1. Cost-shares between DOD and beneficiaries are stagnant, so inflation has led to an unsustainable windfall for beneficiaries.

The enrollment fee for TRICARE Prime, $460 per year, has not changed since Congress set it in 1997.14 So with inflation, the cost to the beneficiary has declined in real terms while health care inflation has increased DOD’s costs dramatically.15 Without changes, the cost shares to DOD will continue to rise, while the costs to beneficiaries will decrease in real dollars. This is a windfall to beneficiaries that DOD can no longer afford.

By contrast, if enrollment fees had kept pace with inflation, a family with TRICARE Prime would pay $652 per year today, or roughly $54/month. That is the same burden in real dollars that such families were asked to pay in 1997, and it makes sense to return to those levels.16

Currently, since there are no enrollment fees, DOD doesn’t know how many beneficiaries choose to utilize Standard/Extra, and thus is unable to plan and budget appropriately for their care. If beneficiaries were required to enroll, DOD would be able to better manage its health care services.

2. Even with higher cost-shares, TRICARE would remain a generous benefit.

Military retirees often choose TRICARE over their private employer-provided health care. And why wouldn’t they? The costs to families for private insurance plans have risen steadily since 2001, growing by an average of $1,754 or 82%. A civilian federal employee now might pay $5,000 for their family’s health care, and those in the private sector might pay up to $12,000. TRICARE, on the other hand, has not raised its annual fee of $460 since 1997.17

The numbers make the choice clear. Not surprisingly, 22.4% of working-age retirees switched to TRICARE during the last ten years. This has helped drive up DOD costs to levels that cannot be sustained.

3. Curbing overutilization is not a reduction in care.

As the beneficiary pool has shifted from military hospitals to civilian care, TRICARE has fallen victim to some of the same overutilization problems experienced in private sector medicine. In cases where private sector doctors are paid on a fee-for-service model, some may have incentives to order more tests than are necessary in order to increase their income, driving up health care costs for the TRICARE program writ large. 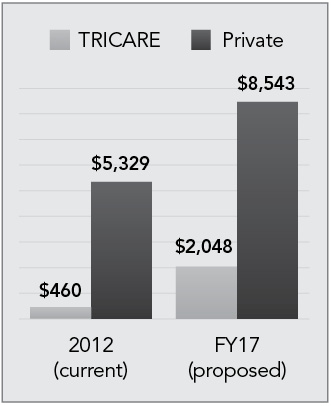 Now, the utilization of services in TRICARE far exceeds that of the private sector. For example, in 2010 users of Standard/Extra received 2.4 times more health care services than their civilian PPO counterparts.19 Allowing DOD to develop methods to address this kind of overutilization can result in better care for the beneficiaries and lower costs to the taxpayer.

Congress can and must preserve the Benefit while Curbing Costs

DOD and the nation have an obligation to provide health care for our troops and their loved ones. That obligation runs strongest to those who are still wearing the uniform. But to keep that promise, we cannot continue the rampant cost-growth this program has seen in the last decade.

Congress must revisit the cost-sharing between DOD and its beneficiaries. The original cost shares should be re-set to tie beneficiaries’ fees and co-payments to inflation in order to ensure that burdens remain in balance over time.

Even with reform, TRICARE is still a generous benefit.

Congress also should allow DOD to implement minor cost controls, perhaps those proposed by the Obama Administration, and establish a commission with military personnel, all beneficiaries including those who do not stay to retirement, and health care experts to examine which private sector cost control mechanisms would be most applicable to the Defense Health Program, while preserving quality care for the beneficiaries.

The current TRICARE is simply unsustainable, and both Congress and DOD must take significant steps to reform the system while keeping faith with our troops. While military health care cannot exactly parallel civilian or private health plans, it cannot be drastically different if we are to keep it afloat in a time of budget constraints.

Reforming the system will be challenging and it is difficult to ask our troops and veterans to pay more for their care. But fees haven’t increased since the 1990s. Congress must make some hard choices to ensure our troops have quality health care and DOD has what it needs to defend the United States.