Half a Million for Half a Buck

A modest, consistent, and early commitment to retirement savings by both workers and employers would potentially create nest eggs worth well over half a million dollars for retiring middle-class couples. Two simple approaches would permanently change the economic fortunes of middle- and low- income people for the better and do more to reduce wealth disparity than nearly any idea under consideration. What are they?

For the average high-school-educated individual, these two strategies alone would create $380,000 in private wealth by retirement (2016 dollars), which can purchase a $1,440 monthly annuity for life with a spousal guarantee. If that worker’s spouse contributes just one third as much in savings, the couple together would enter retirement with well over half a million dollars in liquid savings.

For the average college-educated worker, these two strategies would mean $450,000 in private wealth by retirement and $1,700 of monthly retirement income. Combining these savings with Social Security, modest home equity, and other assets would make millions of ordinary couples who work for a living middle-class millionaires.

Workers planning for retirement today face a unique set of challenges. Fewer workers have the guarantee of a defined benefit pension, and once they retire, they are likely to live longer and incur more health costs than have older generations. Economist Alicia Munnell concludes that about half of working-age households are at risk of failing to maintain their pre-retirement standard of living.1 Specifically, more than half of households ages 30-59 are projected to fall more than 10% short of the income they need to maintain the same level of consumption as before retirement.

There is a valid debate over whether Munnell’s or other metrics are best for assessing retirement preparedness. But there is a vast consensus that middle-class Americans would be better off with higher savings rates and wealth accumulation. Not only would they enter retirement more prepared; they would also benefit more from our new economy, in which returns to capital (or shareholders) have increased relative to returns to labor. The question is, how much does it take for middle-class workers to save—and is a comfortable retirement within reach for today’s workers?

A solution for the middle class

Saving for retirement is not purely a matter of self-discipline. It has to be balanced with current expenses, paying down student loans, and saving for your children to go to college. Yet research has repeatedly shown that when defaulted into a modest employee contribution—most often 3%—workers tend to stay with the contribution. A 2015 study of more than 500,000 eligible employees found that automatic enrollment in employer-sponsored plans increases participation from 42% under voluntary enrollment to 91% under automatic enrollment.2

A modest, consistent employee contribution can go far if combined with a minimum level of support from employers. Retirement savings in America has always been about the employee and employer working together. Social Security splits the tab down the middle. Defined benefit plans combine efforts of worker and employer. So it’s reasonable to expect that employers continue to play a part in preparing workers for retirement in this new economy.

So we tested a simple hypothesis: what if workers were defaulted into 3% employee-side contributions that escalate up to 5% over five years; and what if employers were to contribute just 50 cents an hour to a retirement plan, for every hour an employee works? We ran the numbers, and the results show that individual savings remains an incredibly powerful tool, even at these modest levels, for workers spanning the middle class. 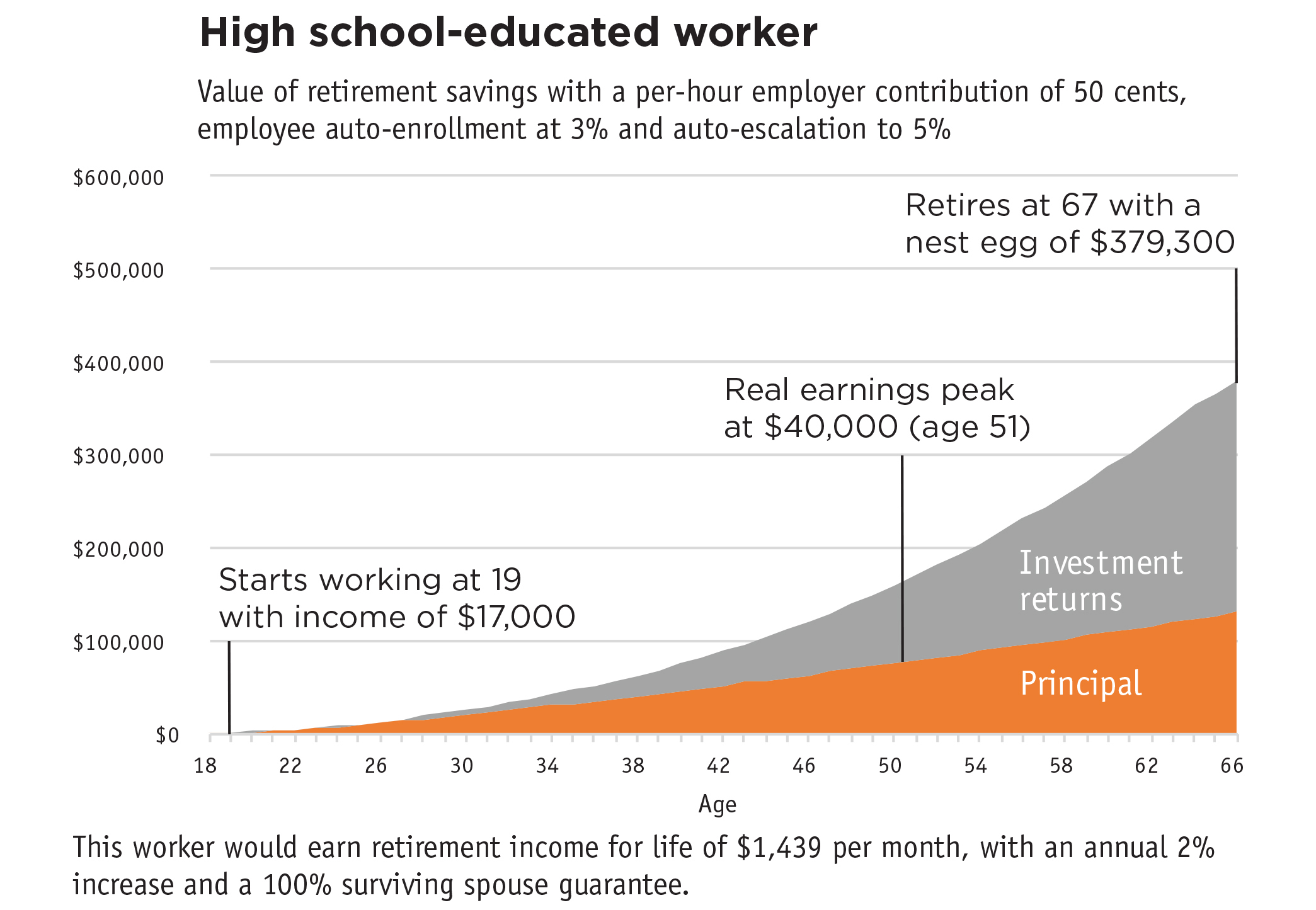 First, take the average high-school-educated individual who works full-time. He starts out earning $17,000 a year and his annual income rises to $40,000—in 2016 dollars—by age 50.3  We assume he has 11 jobs over the course of a career and works until the projected normal retirement age of 67. For every hour he works, his employer puts 50 cents toward his retirement. During his first couple of jobs, while his earnings are low, he opts out of an employee contribution altogether. But as research has shown most workers do, he eventually follows the default option for most of his career. When he does, he winds up saving 3% of his own earnings the first year of a job, 3.5% the second year of a job, and up to 5% for the fifth and every successive year. His savings are invested conventionally in index funds that start with a heavy stocks-to-bonds ratio that evens out as he approaches retirement. We assume real returns simply match their historical average over the last 45 years.4

When this high-school educated worker retires, he has a considerable nest egg of $379,000. That’s enough to purchase a lifetime annuity providing a $1,440 monthly income that rises with inflation and continues until both he and his spouse have died. That is a remarkable boost for a typical worker, considering that the Social Security benefit for this worker would be $1,506.5 If both this worker and his spouse were to earn these benefits, they would have a combined $70,704 of guaranteed annual income for the rest of their lives. That essentially matches the couple’s income before retirement. 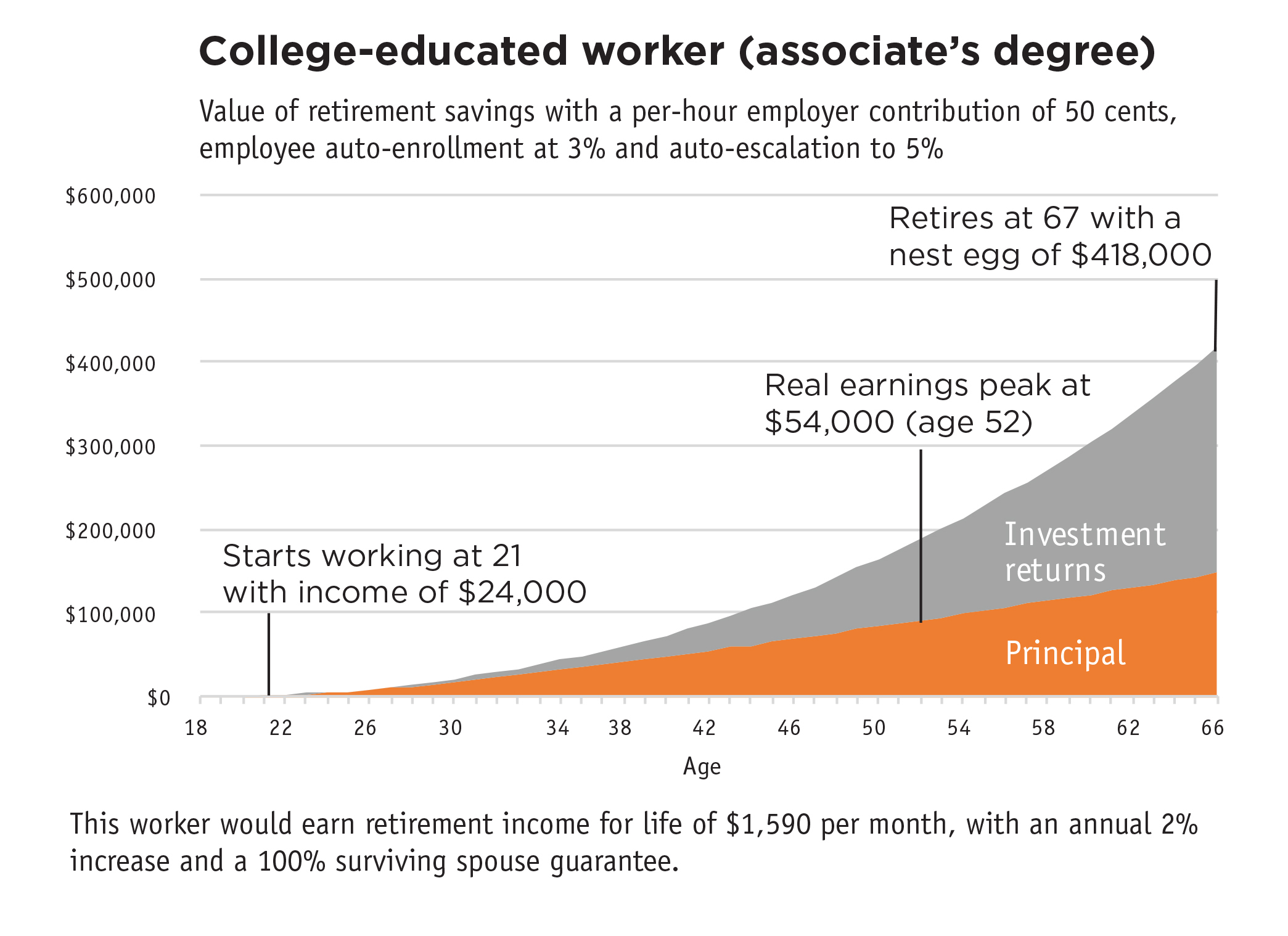 Applying the same experiment to other middle-class workers also yields impressive results. The average associate’s degree-holder who works full time starts out earning $24,000, with income rising to $54,000 at age 52. If she also works until the normal retirement age of 67—with the same retirement savings habits as the worker above, she can expect a nest egg of $418,000 and a monthly income stream of $1,590 during retirement. When combined with Social Security benefits of $1,867 per month, two workers of this type married during retirement could expect $82,968 in guaranteed annual income for the rest of their lives.

A college-educated worker starts out earning $35,000, with income rising to $74,000 at age 54. With the same assumptions as the previous two scenarios, this worker would retire with $450,000 in the bank, convertible to $1,700 in lifetime monthly income. If you assume that this couple has $148,000 in home equity (the median for home-owning households ages 65-74), a couple in this situation would have over $1 million in assets when they retire (not counting the present value of Social Security benefits).6  With their Social Security and retirement savings combined, this retired couple could expect income of $92,928 a year. 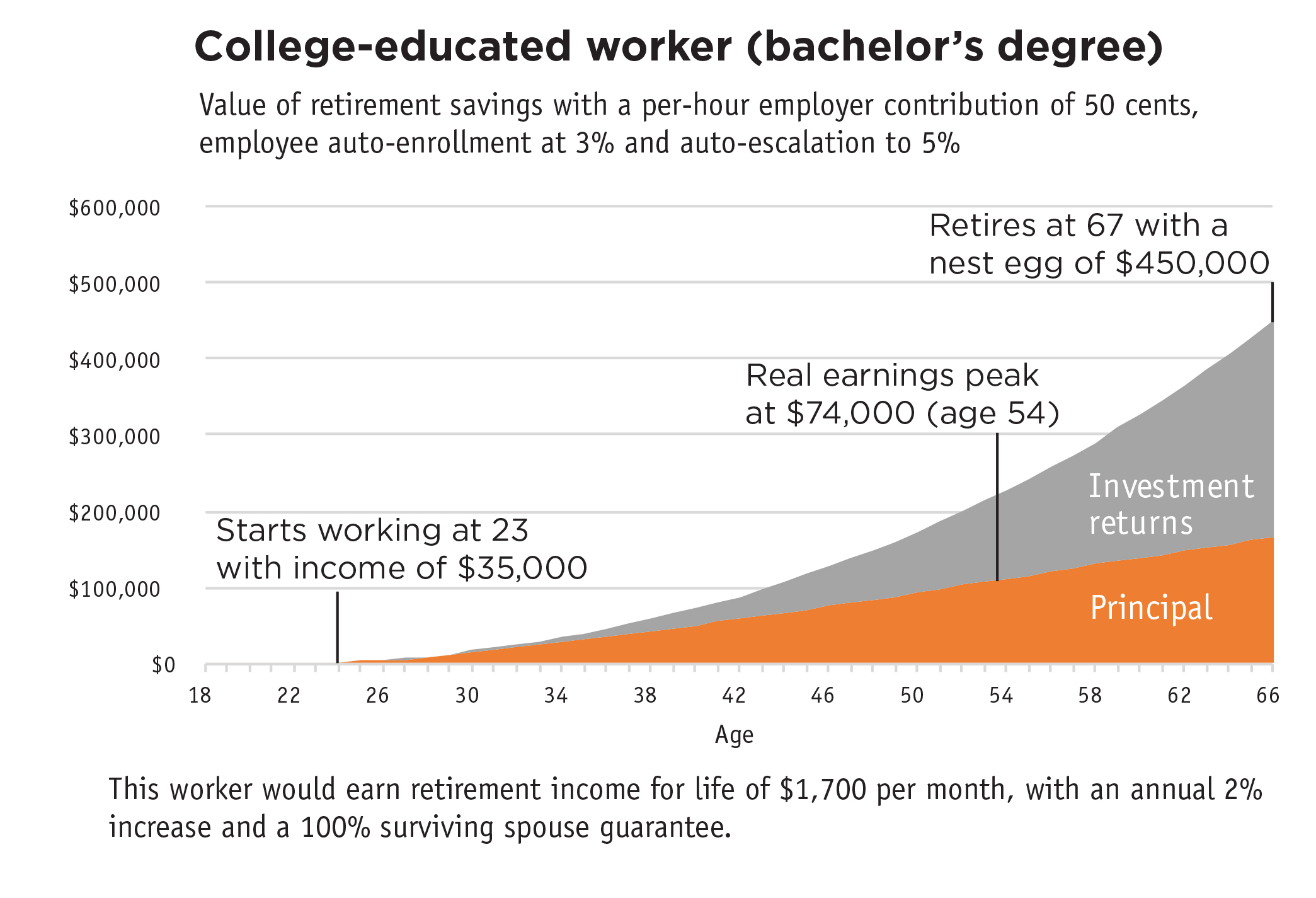 Of course, real life doesn’t allow all workers to work and save nonstop over a lifetime. There are work interruptions, unexpected expenses, outsized student loan bills, and the need to save for college for your own children. There are also ways for workers in the above scenario to amass much larger savings than what’s described here. Some will start working before they earn their final degree. Some will work reduced hours after they retire. Employers may opt to contribute more than 50 cents an hour. Workers opting to save 10% annually, instead of in the 3%-5% range, could roughly double income during retirement, as projected here. Retirees may also tap their home equity or other assets to help provide supplemental income.

Ultimately, the examples above demonstrate that even a worker whose income or opt-out rate is below average can amass individual savings sizeable enough to provide a robust complement to Social Security income. That’s good news. It means that private savings by middle-class workers is more than able to meet the retirement challenge for future retirees. It also means we need public policies and employer practices that dramatically shift savings behavior toward the modest, consistent contributions by both workers and their employers described in this paper.