The Pains of Protectionism: How the U.S. Is Already Suffering from Isolationist Sentiment

Discarded campaign promises have piled up within Trump’s White House. No magnificent infrastructure package. No repeal of the Affordable Care Act. No big and beautiful wall on the border paid for by Mexico. But he has kept one promise: Under the mantra of “America First,” President Trump has ushered in a new era of protectionism. It’s causing serious harm to American workers, American businesses, and our country’s standing in the world.

In this memo, we outline four areas where Trump’s protectionist policies are wreaking havoc for the American economy. Specifically, the Administration’s agenda has led to:

Trump’s America First agenda has centered on a message of improving the lives of U.S. workers, particularly those hurt by international trade. One would then naturally assume that President Trump would prioritize and invest in programs that help trade-displaced workers with job placement and skills training. But the Administration has done just the opposite.

The Trump budget, proposed in March, would cut $2.5 billion from the Department of Labor, the agency tasked with administering most worker assistance programs. This decrease of 21% would jeopardize a host of programs—including the future of Trade Adjustment Assistance (TAA), the primary means to help American workers adversely affected by trade. The budget also defunds the Economic Development Administration, effectively eliminating initiatives that support local economies and assist businesses hurt by foreign competition. As a result of these cuts, an estimated 2.5 million Americans would lose access to job training and employment services.1

Slashing these important initiatives would hurt the ability of the American workforce to weather economic shocks by compromising the government’s role in the recovery process. Cuts to government spending would also have a disproportionate effect on trade-ravaged communities, the very constituents the President claims to be helping.

Less trust by our neighbors

The U.S. and Mexico share more than just a 1,989-mile border. The two countries have strong economic ties, with trade totaling over $1 trillion in 2015.2 Mexico is America’s third largest export market, and, in turn, 81% of Mexican goods and services are sold to the U.S.3 After two decades of closer trade relations, U.S. and Mexican companies are closely linked through global supply chains. The countries also work together on numerous policy initiatives, from migration and environmental protection to eliminating drug flows and coordinating counterterrorism efforts.

Trump’s rhetoric is threatening to upend this close collaboration. Between the President’s offensive comments about Mexican migrants during the campaign and his demands for Mexico to pay for a border wall, relations have taken a toxic turn. Almost two-thirds of Mexicans now harbor negative opinions towards the U.S., the highest level in 15 years.4 Further, while there is interest on both sides of the aisle to make changes to the decades-old North American Free Trade Agreement (NAFTA)—a partnership between the U.S., Mexico, and Canada—Trump has vacillated between unhelpful threats to withdraw from the agreement to impossible demands that risk causing Canada and Mexico to walk away from the table and driving investment to other areas of the globe.

What’s more, Mexico has a historical distrust of America, though stronger economic ties via NAFTA had helped Mexicans to put aside old resentments for new benefits. These suspicions have reemerged with the Administration’s protectionist impulses, reigniting the belief that the U.S. is a threat, not a friend. Mexican politicians face increasing pressure to both avoid further trade concessions and end U.S.-Mexico cooperation on a host of issues. Regardless of NAFTA’s future, it may take years to reverse the negative perceptions of America already elicited by Trump.5 Strained relations on both our northern and southern borders have already cost us financially, even by Trump’s own standards. The U.S. goods deficits have worsened with both Mexico and Canada over the first seven months of the year, falling by $4.4 billion and $8.4 billion respectively compared with the same period in 2016.6 If the Administration continues to antagonize our neighbors, the most likely result is fewer American exports, to the detriment of our trade balances, our economy, and our international relationships.

To reduce its reliance on the U.S., Mexico has already reached an agreement with Brazil to import more corn at lower prices. As a result, U.S. corn sales to Mexico have decreased by 6.7% in 2017, and Mexican Economic Minister Ildefonso Guajardo Villarreal has expressed a willingness to raise tariffs on U.S. corn to “inaccessible levels” should NAFTA fall through.7 Mexico also reached a similar purchasing agreement on wheat from Argentina, with 30,000 tons of wheat to be delivered in December.8

For the past several years, the U.S. has sustained a huge focus on economic and strategic engagement in the Asia-Pacific region for a host of geopolitical reasons. Home to 4.23 billion people, the region represents 40% of the global economy, which is expected to grow by 5.5% in 2017.9 The Asia-Pacific region also boasts seven of the world’s top ten fastest-growing economies.10 But under the Trump Administration, this positive focus on Asia has turned into tension.

The President withdrew from the Trans-Pacific Partnership (TPP) just days after entering office, much to the dismay of Japan and other countries looking for a major economic alternative to China. Trump has also long been critical of the U.S. trade deficit with South Korea and has strongly considered ending the two countries’ free trade agreement (KORUS) as well as adding new, broad tariffs and quotas. As a result, our allies in East Asia no longer sense an American commitment to the region.

This disengagement comes at a time when South Korea and Japan have come under increasing pressure from surrounding countries, both economically and politically. China now has the upper hand in negotiations for its own Asia-Pacific trade deal, the Regional Comprehensive Economic Partnership (RCEP), of which South Korea and Japan are both participants. The countries also face escalating nuclear threats from North Korea. As the U.S. steps back from East Asia, trust of American intentions has faltered with the entire region made less secure.

American pork producers have already been hurt by the U.S. withdrawal from the TPP, which would have eliminated or reduced all of Japan’s tariffs on pork products.11 With both tariffs and a minimum price system on pork still in place, U.S. sales of pork to Japan have fallen by 9% as of August.12 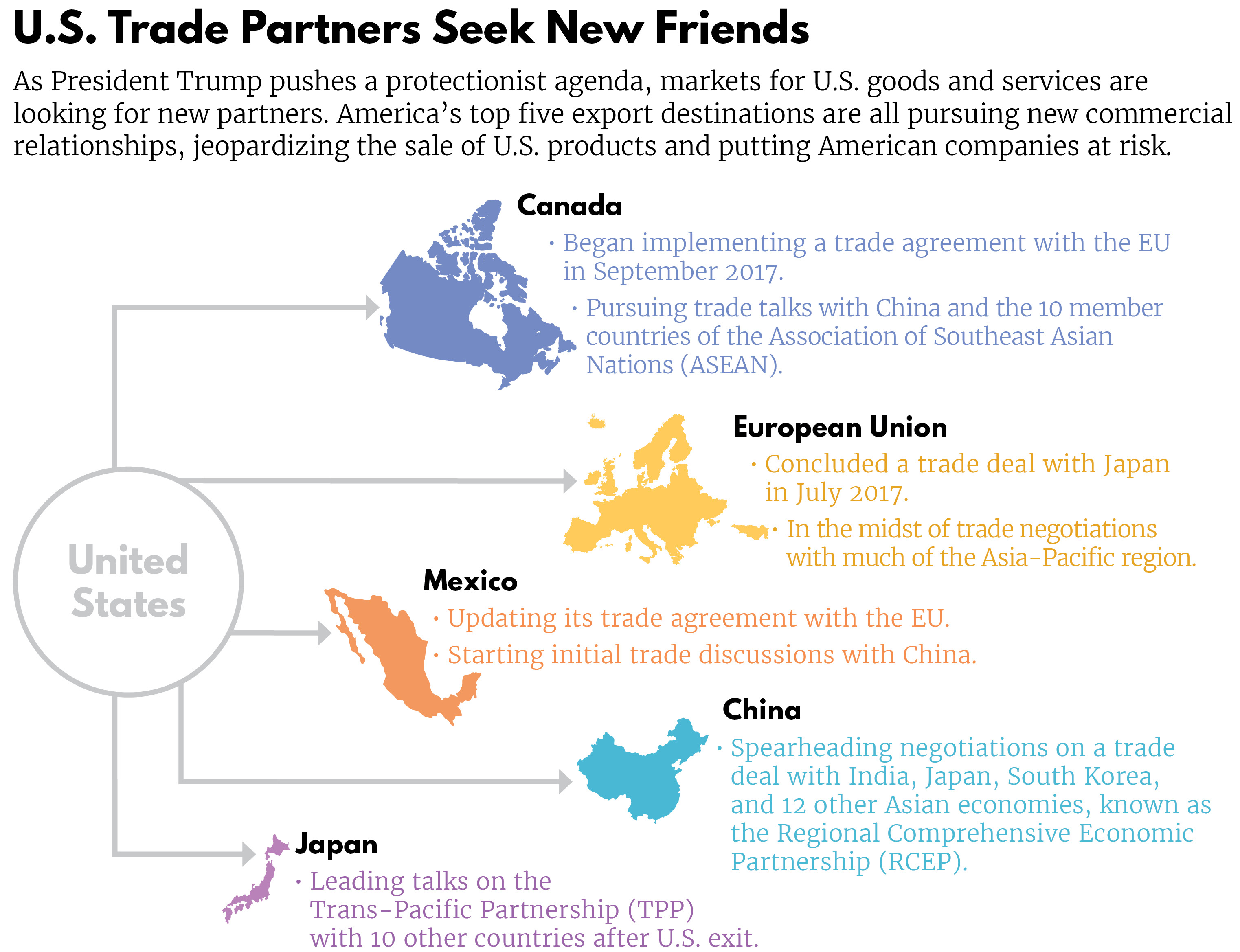 Since the end of World War II, the U.S. has stood at the forefront of the international arena by promoting capitalism and free markets. The current Administration has not prioritized this leadership role, and its protectionist implications have opened the door for other countries to chart a course for the global economy.

China appears most likely to seize this opportunity. With the U.S. withdrawal from East Asia, a gaping economic hole has been left in the Asia-Pacific region, and China has the means and influence to fill the void. Chinese President Xi Jinping, leader of a relatively closed economy, surprised the world by championing free trade and open markets at the Davos World Economic Forum in January. China’s Asia-Pacific trade deal may soon eclipse the now-defunct American efforts, and Chinese-dictated rules on trade have a history of making U.S. companies less competitive in the region.

The European Union has also stepped up to bat. With talks for a U.S.-EU free trade agreement stalled, the EU has entered into trade negotiations with several key economies across the globe. As the EU expands its economic ties with Canada, Mexico, and East Asia, U.S. influence is increasingly eroded.

The status quo on trade needs to be revisited. Policymakers must ensure the gains from trade are widely distributed between big and small business and among all communities. And they must better help communities negatively affected by trade. But the current protectionist agenda will only generate more economic struggles, with lost business, dwindling assistance for U.S. workers, and a declining international reputation. If we really want to put America first, let’s throw protectionism to the back of the line and seize opportunities in this new, interconnected economy.