Congress loves acronyms—especially those supporting and investing in small businesses. There is the MBDA, SBA, PPP, EDIL, SBIC, RRF, and so on. But less mentioned is SSBCI, the State Small Business Credit Initiative. This government program was first implemented during the Obama Administration as a response to the 2008-2009 financial crisis. Now, as we emerge from the COVID-induced recession, this familiar program is back.

In short, the State Small Business Credit Initiative allocates federal funds to states which, in turn, provide loans and equity capital to small businesses and startups.1 States apply for funding and, once approved, are eligible to receive three installments of federal capital. Eighty percent of a funding round must be distributed before states can move on to subsequent rounds.

The inaugural version delivered about $1.5 billion to states and generated over $10 billion of investment funding into state programs supporting small businesses.2 Most recently, the American Rescue Plan provides $10 billion to SSBCI. This time around, over a third of these funds are reserved for socially and economically disadvantaged individuals, tribal governments, and technical assistance for micro businesses.3

As policymakers look to support small businesses—especially those owned by people of color who often struggle to access capital—it is important to understand how SSBCI works. In this memo, we look at how states can use American Rescue Plan funds and lessons learned for how those dollars can reach minority-owned small businesses.

How States Can Deploy SSBCI Funding

SSBCI gives businesses the necessary capital or credit to attain loans, especially businesses that would otherwise be overlooked, such as minority-owned businesses. States have five ways to use SSBCI dollars to extend capital, collateral, and credit:

Loan Guarantee Program (LGP). With this option, states are allowed to issue partial guarantees to lenders for business loans. This is meant to spur private-sector lending because if a borrower defaults on their loan, the LGP will guarantee a certain percentage of that loan is repaid to the lender. Small businesses typically use this type of program to secure lines of credit, working capital, and commercial real estate loans. Prior users of this program tended to be more established businesses.4

Collateral Support Program (CSP). Business loans typically require some form of collateral from the borrower to protect the lender in case the loan goes into default. But not all small businesses have enough cash on hand to put up collateral. CSPs have helped small businesses attain loans by providing cash collateral to lenders to alleviate ‘collateral shortage.’5 This program often helps entrepreneurs from socially and economically disadvantaged communities who have less personal collateral or others whose businesses may be so young that they have not established collateral within the business.

Capital Access Program (CAP). As an alternative to a loan guarantee or collateral support, a CAP program offers a reserve fund to shield lenders from partial losses. The lender and borrower both contribute between 2-7% of the loan amount, which is then matched with SSBCI funds from the state. This program allows lenders to extend loans and lines of credit to young businesses, while committing to additional loans to grow its CAP reserve pool. Many recipients of the CAP program were microbusinesses with under ten employees or less than $1 million in sales.6

Loan Participation Program. An LPP does one of two things. First, a state may pose as a lender by purchasing a portion of an existing loan. Or second, a state can offer a companion loan in conjunction with the original private-sector lenders’ senior loan. Either method helps borrowers attain loans under more lenient terms.7 Businesses in this program must be established with over three years of financial statements with proof of shortfalls.8 Therefore, many businesses that participated in this program were past their startup phase.

Venture Capital (VC) Program. Venture capital is a form of equity investment instead of a loan. Under this program, capital is provided to new businesses from either a state-led venture fund or via private-sector VCs who deploy the state’s capital to individual businesses. Recipients of this type of program are often businesses that may not turn a profit right away, e.g., technology-focused start-ups in research mode or just bringing new products to the marketplace.9 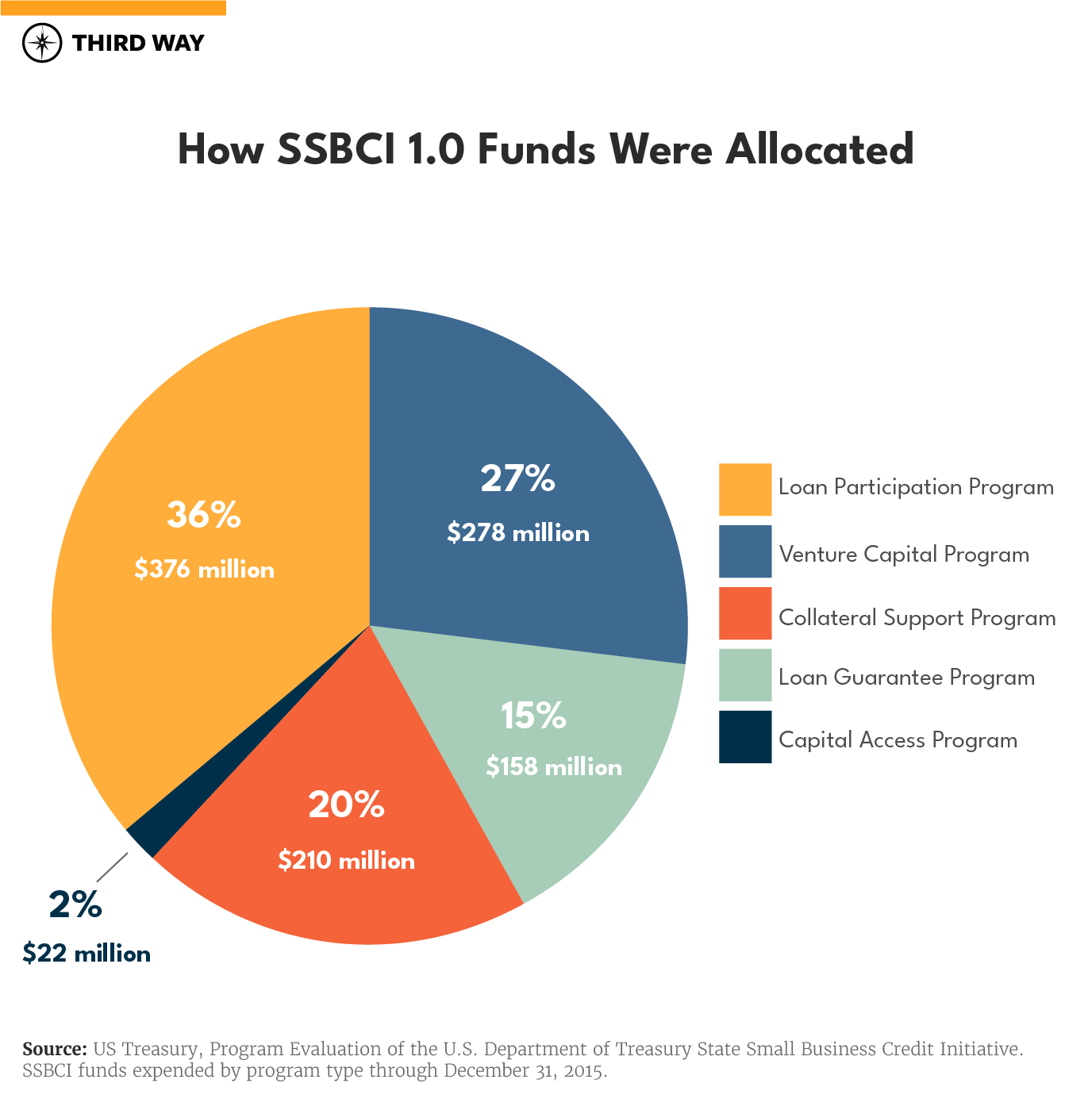 The inaugural version of SSBCI was a success. The program was created to spur up to $15 billion by leveraging $1.5 billion in federal funds.10 It held states accountable by thoroughly detailing their agenda for underserved communities. And community development financial institutions (CDFIs) and community banks played a major role, which expanded the program’s reach to rural and low-and moderate-income areas.

Now, SSBCI 2.0 is six times its original size as a $10 billion federal program. It specifically carves out billions so that socially and economically disadvantaged individuals can have access to credit and equity investment.11 Specifically, the program sets aside:

For a business to be eligible for the set aside, it must have least 51% of private or public ownership from socially and economically disadvantaged individuals. Like SSBCI 1.0, funds will be sent to states in three tranches.

These specified carve outs are critical to the success of SSBCI 2.0, but more will need to be done to ensure that disadvantaged businesses have the support they need. As policymakers and state leaders work to usher this program forward, a look at the first iteration of SSBCI provides four lessons learned for how to ensure that money reaches people who need it most.

1. States should explicitly define low-income areas and minority business owners as targets for SSBCI programs. When using the SSBCI 1.0 program, each state was able to use their own definition of “underserved,” which had different impacts in different areas.12 For example, New York’s “underserved” could be completely different from Illinois’s or Mississippi’s. Programs like the NYSBAP, the New York State Bond Surety Assistance Program from SSBCI 1.0, eliminated barriers faced by underserved businesses by specifically targeting women- and minority-owned businesses. The program not only assisted with technical support, but also provided a surety bond line for minority businesses to participate in large state and local projects.

Advantage Illinois, a program designed by the Illinois Department of Commerce and Economic Opportunity to deploy SSBCI money, defined underserved as a person who was “an ethnic minority, women, disabled, or a veteran.”13 And to better reach those groups, Advantage Illinois partnered with groups like the NICDC, the Northern Illinois Community Development Corporation, that provided loans to small businesses. 14

Southern states like Mississippi and Alabama deployed half of their SSBCI funds to rural areas. While that met those states’ definitions of “underserved”, not all of those funds ended up in low-income places. In fact, larger agribusinesses, which are not typically capital starved, were able to take advantage of the funds.15

2. States with highly skilled staff lead more efficient marketing campaigns.16 Some states marketed their SSBCI program as a tool that specifically helped small businesses located in low- and moderate-income areas or for minority, underserved, and women- and minority-owned small businesses.17 But to do this well required not only being cognizant of the needs of those groups, but having expertise to reach them. When staff recognized the specific needs of these communities, barriers were removed, response times were swifter, and funds were distributed sooner. For example, the state of Utah worked with bank executives and financial networks with established relationships in underserved communities.18 Utah’s initiatives were then marketed specifically to minority businesses in low- to moderate-income communities.19

3. When money went through community banks and CDFIs, more minority communities were helped. States included CDFIs in their SSBCI planning because of their dedication to target underserved communities and assist non-traditional borrowers. When CDFIs had a presence at the planning table, programs’ reach became more accessible across many states. Together, 81% of SSBCI loans were made by these entities. In California, the California Capital Access Program (CalCAP), a CDFI, pushed for ‘banks and other financial institutions’ to grant loans to small businesses that had issues attaining access to capital. In 2013, CalCAP’s Opportunity Fund in California provided more than 2000 loans. Prior to SSBCI, only 50 loans were able to be provided by this fund. The Opportunity Fund also served the smallest businesses, with loans ranging from just a few hundred dollars to over $100,000.22 These loans supported the smallest of small businesses with smaller profit margins.

4. Collateral programs expend their money the quickest. During SSBCI 1.0, the collateral support program’s ability to address collateral deficits that minority businesses face made the program attractive to lenders and investors who wanted to reach minority communities.23 This program expended 81% of its total funding by 2015 compared to the loan participation program at 80%, capital access at 49%, loan guarantee at 68%, and venture capital at 62%.24 Speed in expending funds might be particularly relevant in designing a state program for two reasons: to promote economic recovery from the COVID-19 pandemic and to be better positioned for the $1 billion in bonus allocations for succeeding in getting money out to businesses owned by socially and economically disadvantaged individuals.

Idaho’s collateral support program had a different approach. The state did not have a minimum loan size requirement, which expanded its reach to more types of small businesses.28 Idaho’s rural areas received ¼ of its collateral funds by December 2013.29

Our economy needs large, structural reforms if we’re going to build a more equitable economic era ahead of us. Entrepreneurs across the country will need help assessing more markets, deeper networks, and more capital. SSBCI is a key part of that and has the potential to drive significant capital to small businesses across the country, especially those run by women and people of color.