Governor Jerry Brown recently signed a clean power bill into law, and it’s a pretty big deal. SB100 requires California to have a 100% “zero-carbon” electricity supply by 2045. It also adds to an important trend of states expanding their focus beyond just renewables to cut carbon more aggressively, quickly, and cost-effectively.

But when you look at how California plans to meet its larger goal of slashing emissions across its entire economy (not just from power plants), you can get a better sense of just how critical SB100 is, and how its impacts will reach far beyond the power sector.

Indirect Benefits in Transportation and Heating Will Outweigh Power Sector

California already had a law on the books requiring the state to reduce carbon dioxide emissions economy-wide by 80% (compared to 1990 levels) by 2050. Studies of how California might actually accomplish this goal are pretty consistent on a couple of things--electricity must be used to meet a larger share of the state’s energy needs in the transportation, residential, and commercial sectors; and that electricity has to come mostly from zero-carbon sources. That second part is what makes SB100 and the guarantee of carbon-free power so important.

In its strategic plan for hitting emissions targets, the California Air Resources Board found that a significant amount of electrification would have to occur as early as 2030, ostensibly with additional switching to electricity in future years. We took a look at the emissions impact of being able to meet that additional power demand with carbon-free sources, thanks to SB100. If you combine the carbon-reductions in transportation, space heating, and water heating enabled by the new bill, the total comes to 91 million metric tons of CO2 per year. That’s a good deal larger than the 84 million tons eliminated from the power sector directly. So the emissions reductions from SB100 will more than double if California follows through in electrifying other parts of the economy. And that’s using conservative estimates for electrification rates! (Our estimate only counts electrification included in the state's 2030 plans, with further electrification expected from 2030-2050). The chart below gives the breakdown of our findings. 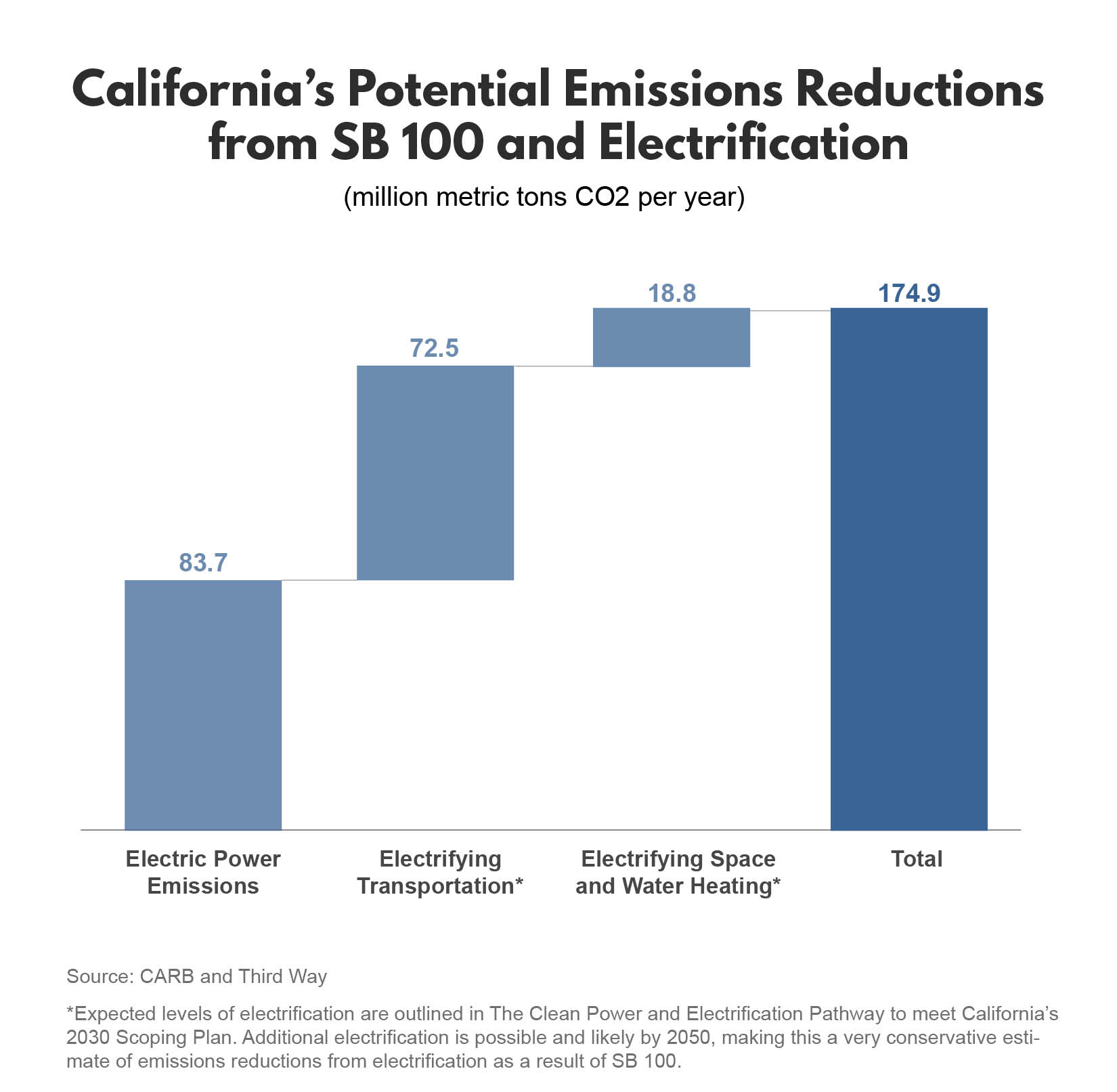 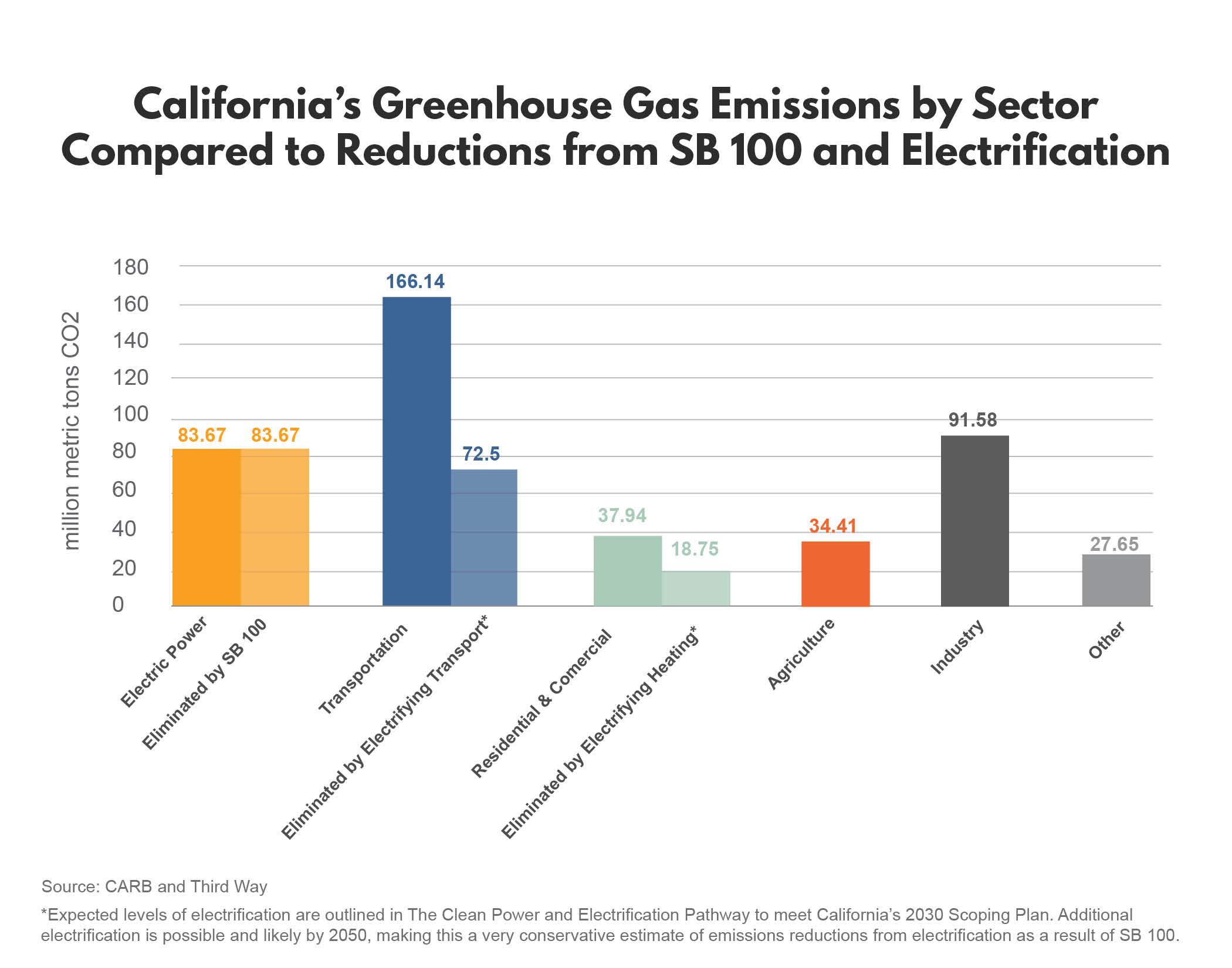 These cuts really add up. If you combine the emissions that SB100 directly eliminates in the power sector with the reductions it enables in other sectors, there’s a total of 175 million metric tons of CO2 that can be knocked-out. We’re talking about eliminating 40% of California’s total emissions--or half of the total economy-wide carbon reduction goal. That’s a pretty big deal. 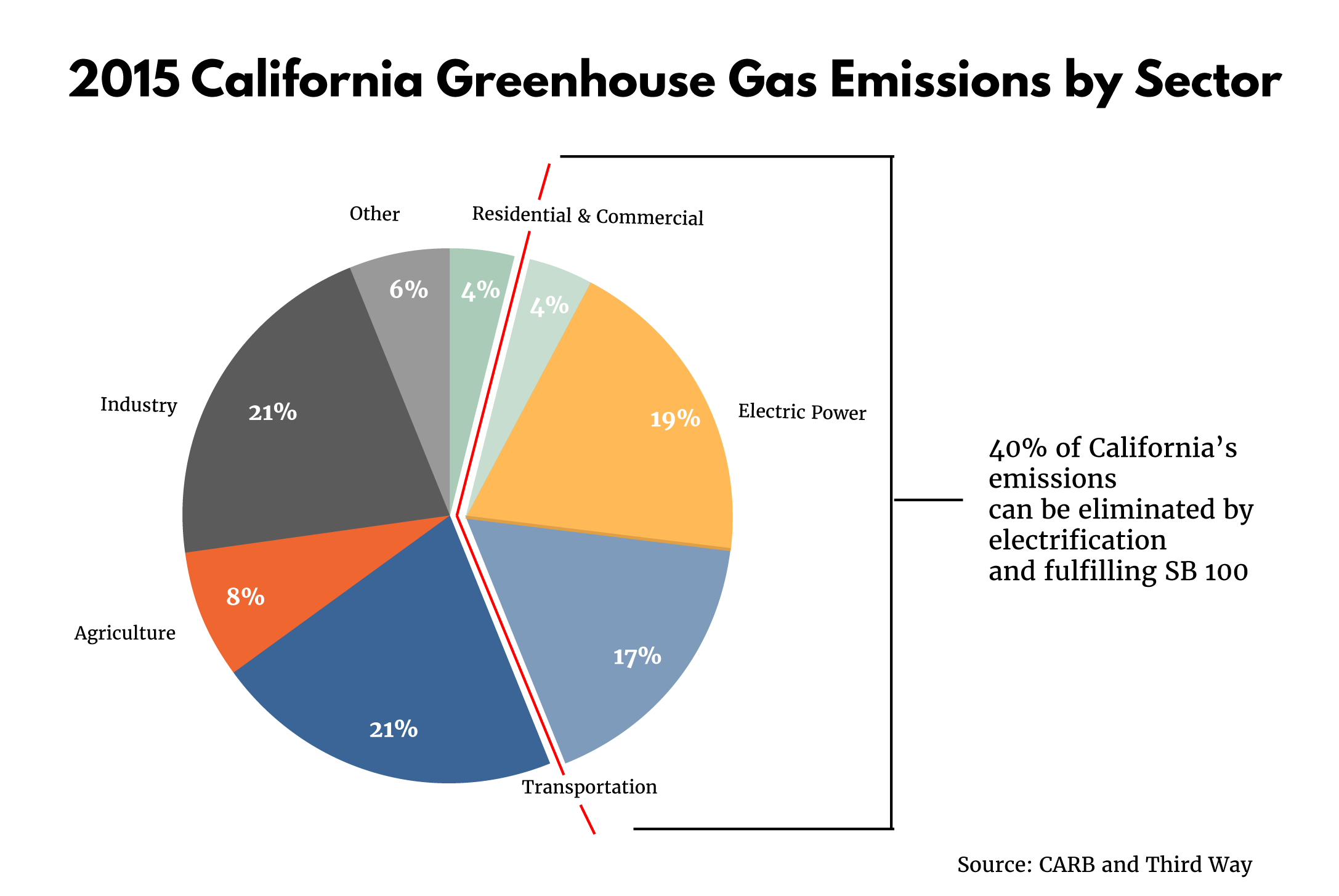 The potential for SB100 to reduce emissions across sectors has exciting implications for California. But the fight is far from won. Even if SB100 enables the elimination of 40% of total emissions, California will still have to address another 40% of emissions in order to meet its 80% by 2050 goal. And with Gov. Brown’s new executive order (B-55-18) calling for full carbon neutrality by 2045, any remaining emissions after 2045 will need to be offset by carbon dioxide removal. California has given itself an immense challenge. But it’s also demonstrating a willingness to adopt equally immense solutions. We’re rooting for its success.