At the end of 2017, we released our first ever carbon capture map that featured  102 carbon capture projects globally, with 53 in the United States. Since then, we’ve expanded our methodology to include even more projects, bringing our total count to more than 300.  Some of these projects are being led by innovative new startups at the early stages of technology development, while others have been in commercial operation for decades. While they all play a role in advancing a carbon capture sector that will be vital to global climate efforts, they’re taking advantage of a variety of technologies and being used in a number of different ways.

Our interactive map allows you to dig deeper into the types of projects, filter through their locations, and see who’s working on them. You can also access the database of projects here.

The following is a quick explainer of the major applications for carbon capture technologies. 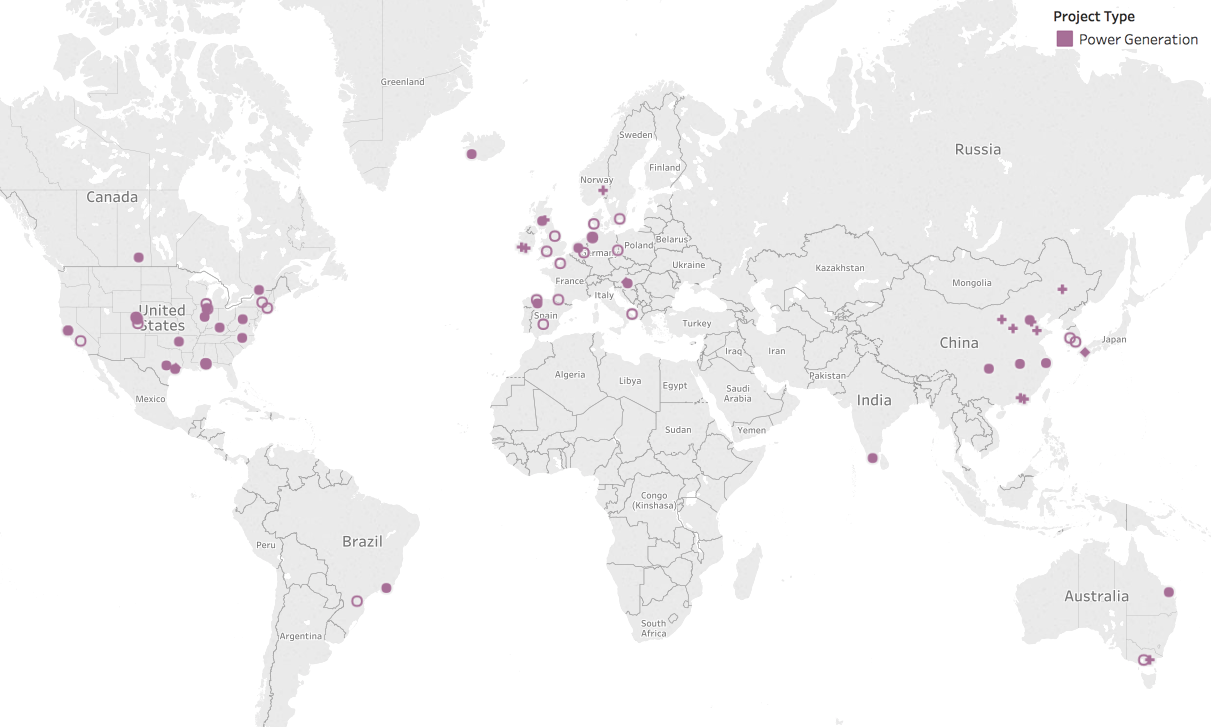 Carbon capture on power plants that burn coal or natural gas is the most well-known type of project. There are around 13 of these projects globally. In the U.S., coal has been on the decline for years, with a majority of remaining plants expected to retire within a decade. However, significant emissions are still being produced by America’s nearly 2,000 natural gas plants, none of which employ carbon capture. And projections show that the new gas plants expected to come online in the near future will be spewing CO2 for decades. Many of these plants may need to be retrofitted with capture technology to keep the U.S. on a path to reach our CO2 reduction goals. New plants can also be built with carbon capture, like the Petra Nova coal plant and the natural gas plant being developed by NetPower.

BioEnergy with Carbon Capture (or BECCS) 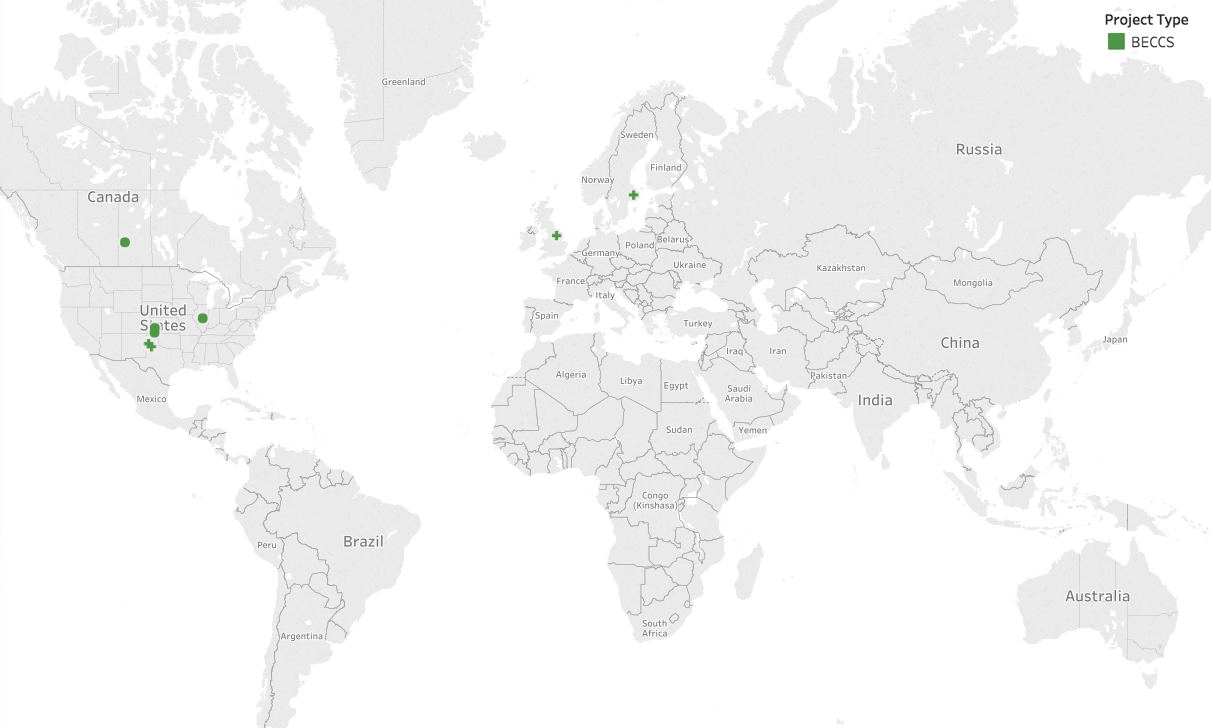 BECCS is one of two ways to achieve negative emissions and the only way to do so while producing power. BECCS facilities generate electricity by burning biomass (plant material) that has absorbed CO2 from the atmosphere throughout its lifetime. Instead of sending that CO2 back into the atmosphere when the biomass is burned, BECCS facilities capture the emissions and either store them or use them for some other purpose. When all's said and done, you end up with more electricity and less atmospheric CO2 than when you started. 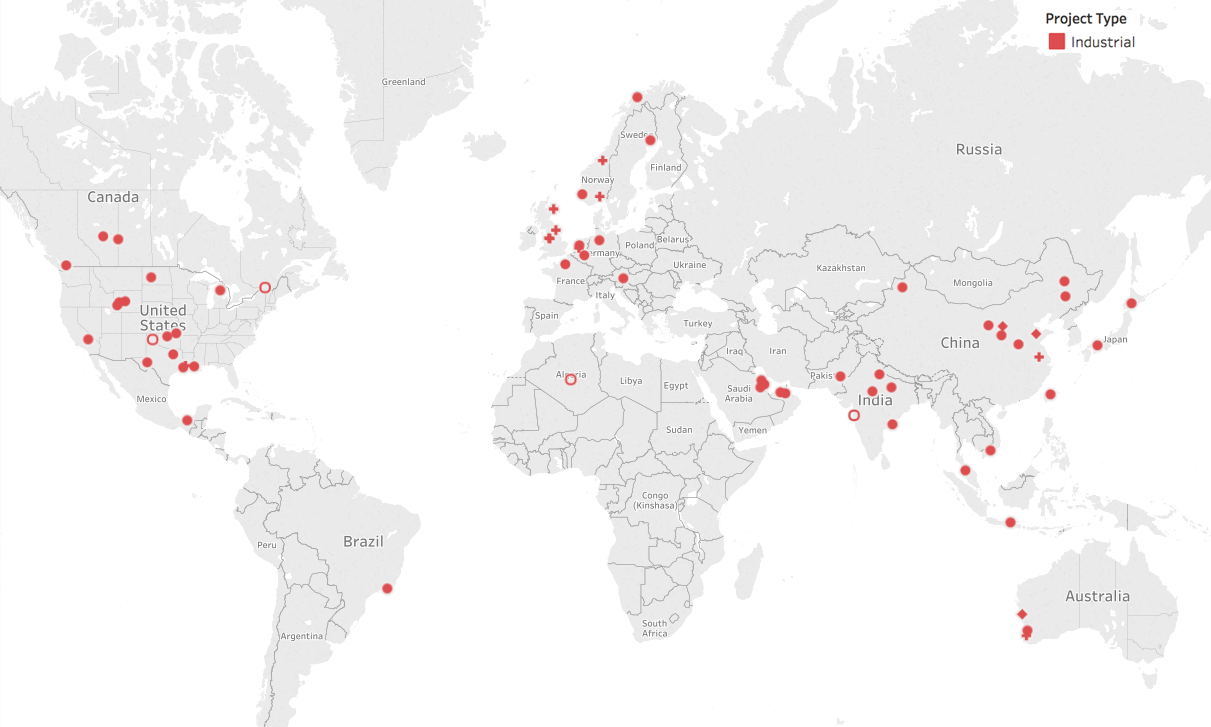 While industrial sources receive less attention than the power sector, they’re responsible for about 21% of global emissions. And, unlike the power sector, where renewables and other low- or zero-carbon options can help with emissions reductions, carbon capture is the only technology we currently have to significantly decarbonize the industrial sector. Why? Two main reasons. First, very high-temperature heat is needed to create materials like steel or cement, which is achieved through burning fuel. Renewables have very limited abilities to produce high-temperature heat. Second, much of the CO2  produced by these facilities is not from burning fuel, but from the chemical reaction of creating the material. For example, to create cement, limestone is heated to very high temperatures,at which point it breaks down and releases CO2. That’s in addition to the CO2 emitted by burning fuel to create the heat. 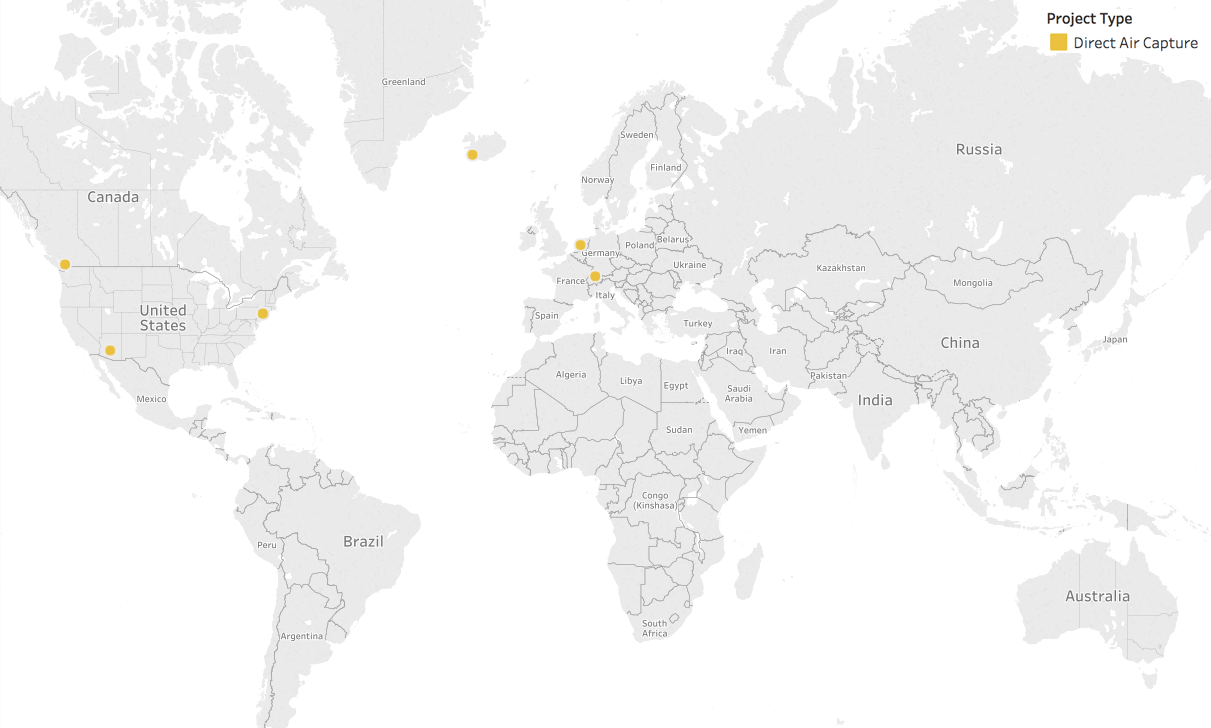 Direct air capture is just what it sounds like: sucking CO2 straight from the atmosphere, rather than from a concentrated source like a power plant or steel mill. This technology is less mature than carbon capture on concentrated sources, but today there are already seven direct air projects globally, with 3 in the United States. Direct air capture is another way to get to negative emissions,  something many climate models show we’ll need to keep global warming below 2°C. 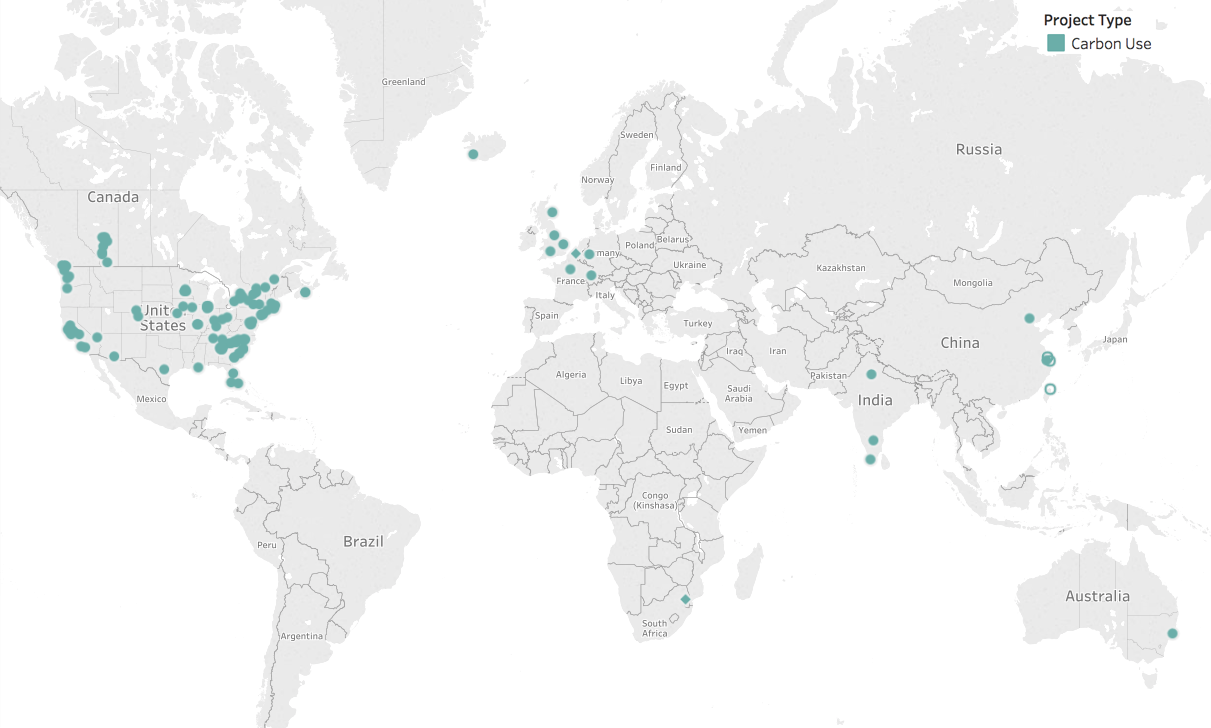 Instead of thinking of CO2 simply as waste, some look at it as an opportunity to create valuable products. Right now, there are 49 companies working on commercial uses for carbon. These projects turn the captured CO2 into chemicals, building materials, and even shoes. Carbon use is important because, with current commercial technologies, power plants and industrial facilities equipped with carbon capture are more expensive to operate than their counterparts that vent CO2 into the atmosphere. Carbon use can create markets for CO2 emissions, giving carbon capture facilities a new revenue stream that can make them competitive with other power generators.

This map includes five types of projects (Power Generation, Industrial, BECCS, Direct Air Capture, and Use) as well as Test Centers. Of the 306 icons on the map, 9 are Test Centers, which we included in the 2018 update of the map.  These centers typically allow for testing of a variety of types of technologies, which is why they received their own type on the map.

The map also assigns each project a status, using one of four options: In Planning, Construction, Operational, and Completed. Completed projects are those that were run for a period of time but have since been shut down. Typically, these shutdowns occurred intentionally and by design. They are included because the intent of the map is to show the full scope and breadth of carbon capture projects that have been deployed throughout the technology’s history. Of the 306 icons on the map, 35 represent Completed projects.

The Global Status of CCS: 2017 from the Global CCS Institute