Should This College Accreditor Be In Charge of Assessing Educational Quality?

This week, the National Advisory Committee on Institutional Quality (NACIQI) will be meeting to help determine the fate of several college accreditors. While the process of determining which college accreditors are federally recognized can seem mundane to some, it can have big implications for students and taxpayers. For example, the federal government doles out over $100 billion in federal student aid every single year, allowing students to subsidize their higher education pursuits with federal grants and loans. Without an accreditation stamp of approval, institutions have no access to this large pot of money, which many rely on heavily to operate.

One of the accreditors up for review this time around is the Accrediting Commission of Career Schools and Colleges (ACCSC), an agency that predominately oversees for-profit career colleges. Following the ongoing collapse of the embattled Accrediting Council for Independent Colleges and Universities (ACICS), the membership of ACCSC institutions has grown substantially over the past few years. The recently released accreditor dashboard shows that ACCSC currently oversees 370 institutions that receive $2.8 billion in federal student aid every award year.

If it is awarded re-recognition, ACCSC will be able to serve as a federally recognized accreditor to these institutions. If they are terminated, they will not. Simple, right?

So, what are accreditation agencies supposed to do?

They serve as an important part of the triad, along with the federal government and state authorizers. These three entities together are supposed to ensure a high standard of educational quality at postsecondary institutions across the US. With students’ futures and taxpayer dollars on the line, it’s important that accrediting agencies get it right. And while ACCSC has said it’s a “valid and reliable authority on the assessment of educational quality,” when exploring federal data, this story just doesn’t add up at many of the institutions it oversees. Alarmingly, its stamp of approval too often leaves students worse off than if they hadn’t enrolled in the first place, especially our most vulnerable students. The implications of this can be huge.

For example, we’ve run numerous studies that show that a high proportion of ACCSC schools offer no economic return on investment whatsoever. Last year, we released a report on the Price-to-Earnings Premium for institutions across the country. In short, we measured the time it takes former students to recoup their educational costs, based off the net price they paid to attend and the earnings premium they obtained. Using the previous accreditor data file, we ran the numbers and saw that out of the 230 institutions that ACCSC oversaw at the time, 59—over a quarter of ACCSC schools—showed no return on investment (ROI) for their students. This means that the majority of students earned less than the average high school graduate within the state where their institutions were located, even 10 years after initial enrollment. These 59 ACCSC institutions still received $194 million in federal students aid during that award year.  That’s a lot of federal dough with no ROI for students who attend. 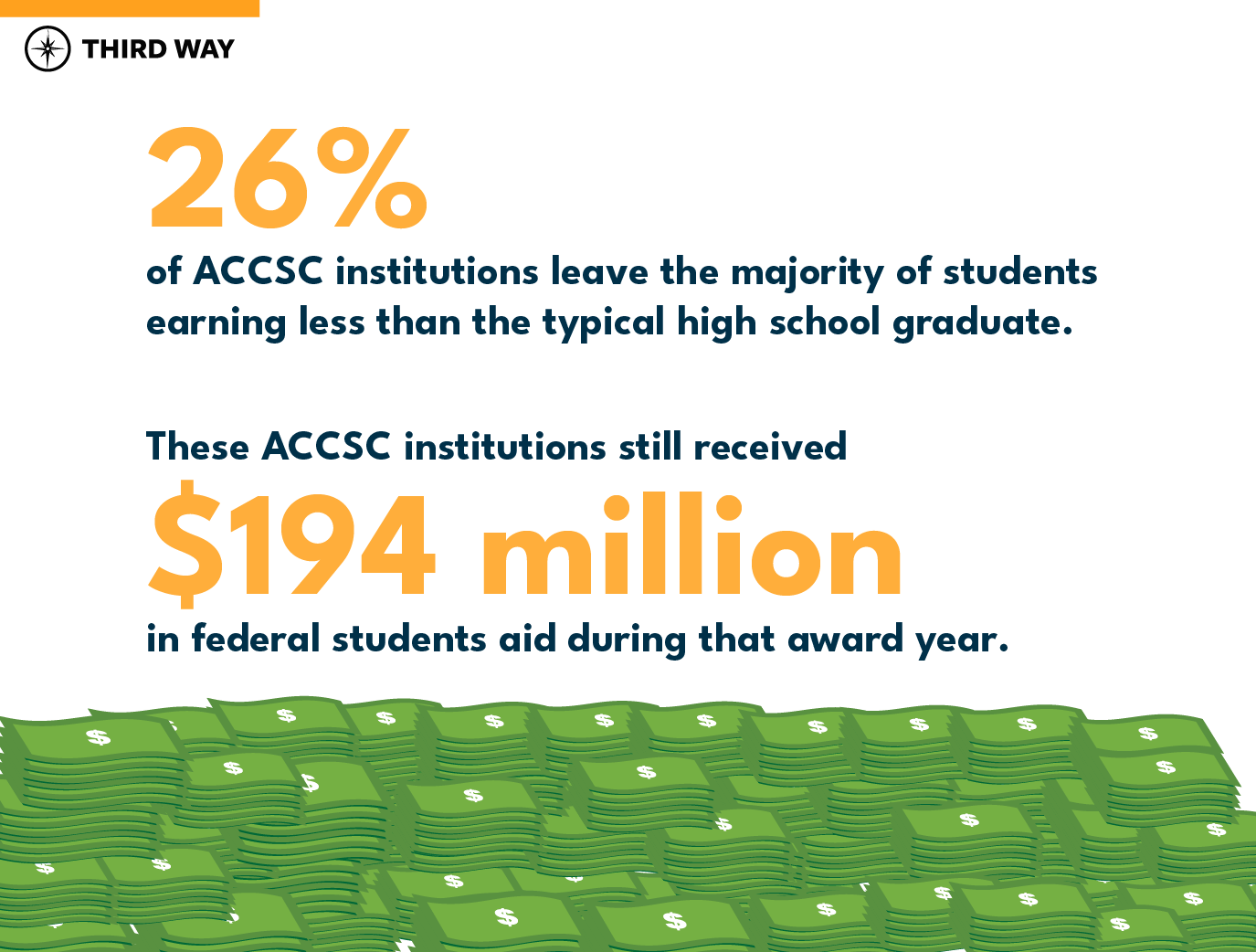 In a follow-up report, we saw that the results were even worse for our most vulnerable students who attended ACCSC institutions. Sixty-nine out of 174 ACCSC institutions with available data (40%) showed their low-income students failing to earn as much as a high school graduate, after they attended. These 69 institutions still received $837 million during that award year. Rather than serving as an engine of socioeconomic mobility, they received federal money but left low-income students even worse off, perpetuating many of the socioeconomic barriers that already exist to underserved communities. 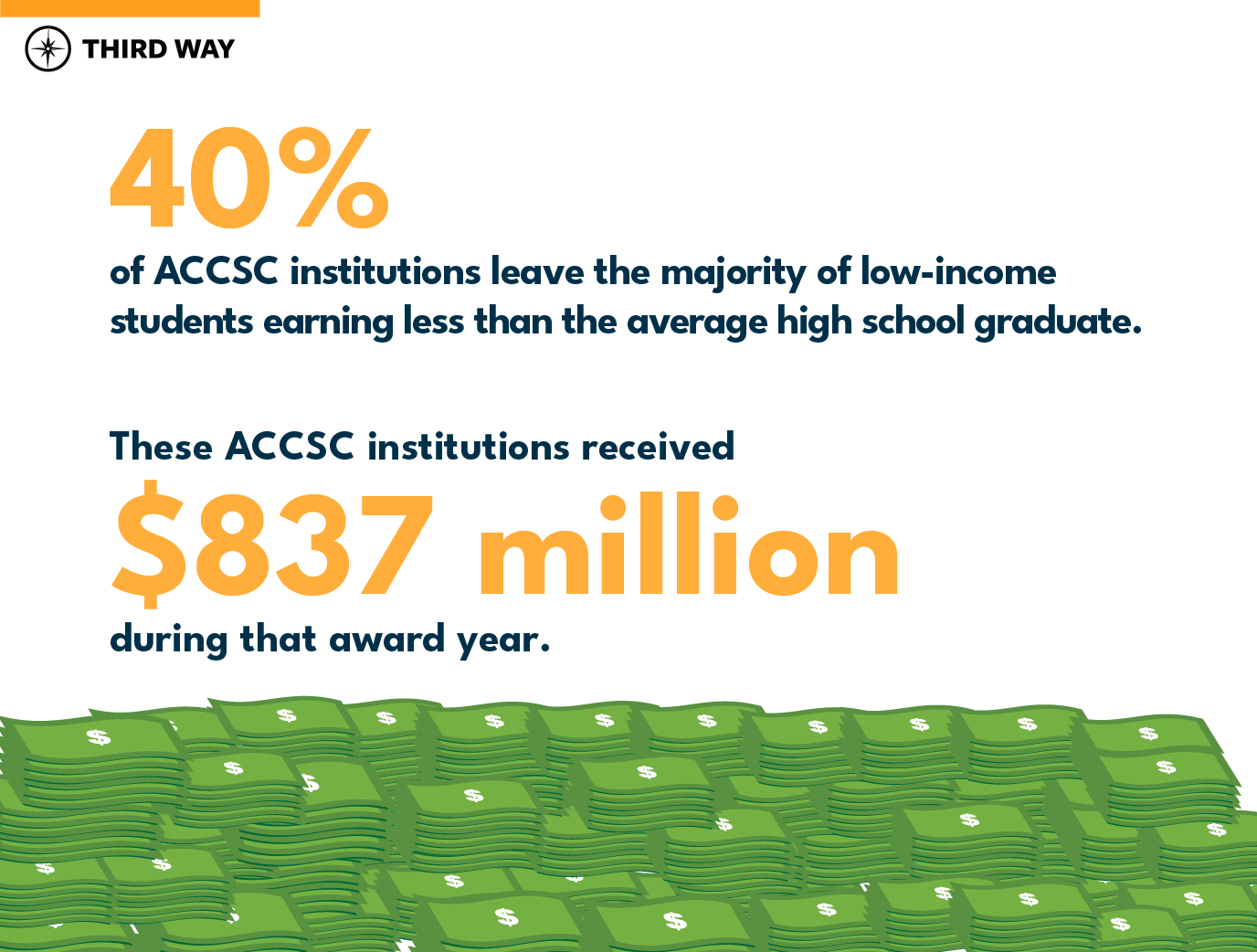 The most recent accreditor data file released before the upcoming meeting also reveals troubling results. These data show that 49 ACCSC membership institutions are currently on Heightened Cash Monitoring 1, indicating minor to major compliance issues, such as late or missing annual financial statements, outstanding liabilities, concern around the school's administrative capabilities, financial responsibility scores, and possibly severe findings uncovered during a program review. I worry that some of these institutions may be one or two steps away from closure, as we’ve previously seen with institutions overseen by ACICS, which has recently been recommended for termination.

While ACCSC will make its case for how well they use student outcomes to inform its accreditation decisions, these data tell a different story for too many of its member institutions. We simply cannot afford to have another college accreditor provide its stamp of approval to institutions that leave students worse off. We need the assurance they acclaim to provide to be backed up by the outcomes they produce. If not, we will likely see a repeat of history, where students are left worse with limited career opportunities and unmanageable debt with taxpayers footing the bill.