We are still in early innings when it comes to a complete understanding of the severe economic consequences from the COVID (CV) crisis. This morning we received a glimpse of the damage to workers’ wellbeing: they are lining up for unemployment insurance in record numbers compared to what we would consider “normal.” To be clear, there is nothing normal or good about being out of a job. In just one week, the number of people filing for claims shot up to 281,000 from 211,000 in the prior week. 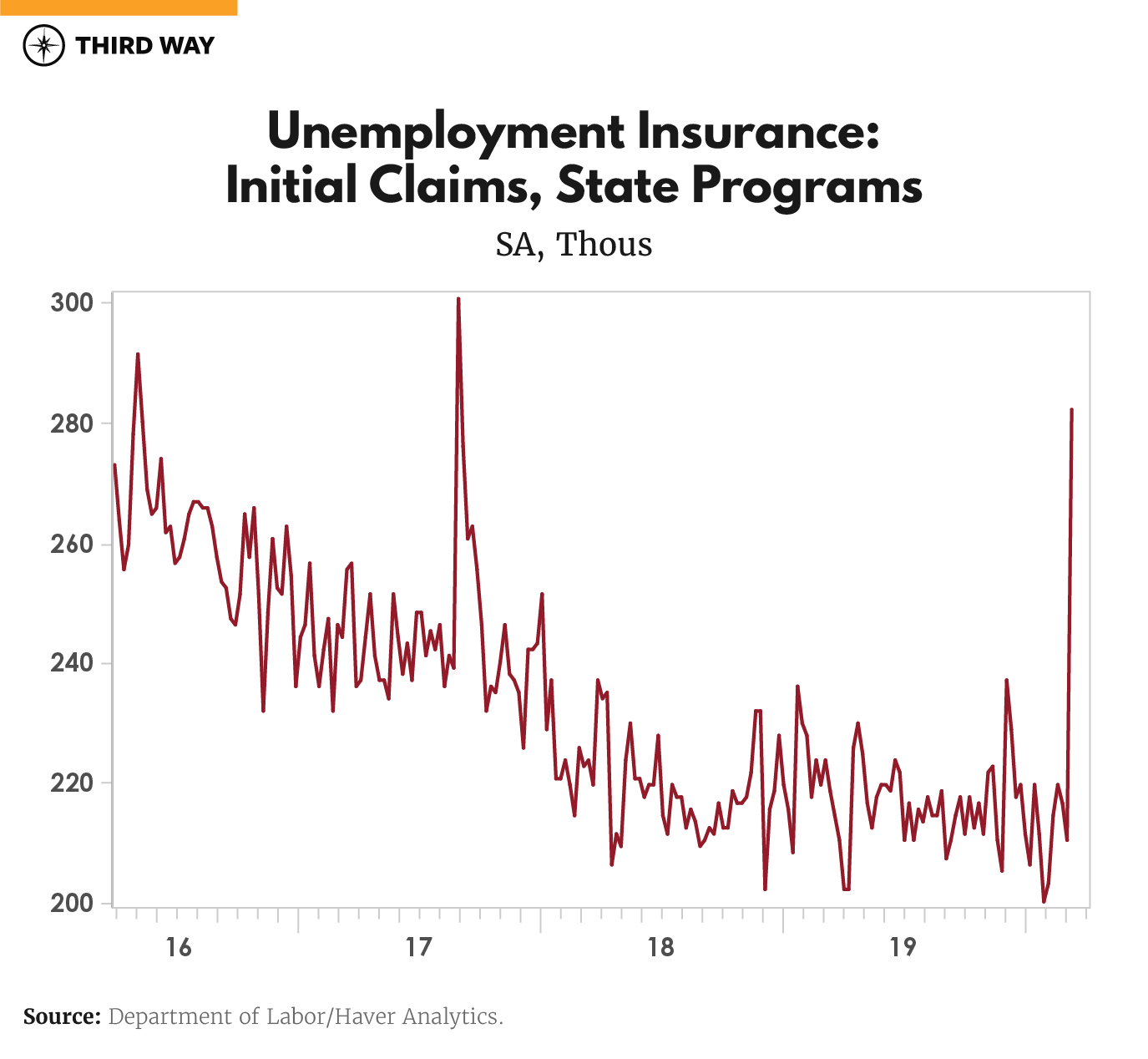 Yet, this is only the beginning. As we see upcoming economic reports on the current shutdown of economic activity, there are likely to be some historic and shocking results. Yesterday, JPMorgan issued a new economic forecast which indicates the economy could contract at an annual rate of 14% in the April – June period. This is a shocking number which could get even worse. Exactly two weeks from today, on April 1, we will begin to see data reflecting the extent of the hit from the crisis. Indeed, April 1 – 3 will offer many important indicators, including ADP jobs, employment from the US Department of Labor, auto sales, and purchasing managers’ indexes – a key survey of suppliers in manufacturing and services.

It is important to think bigger and broader in terms of a policy response to this crisis. My sense is that we are thinking along the lines of an old playbook that doesn’t directly target help for workers who are laid off because of a health crisis shutdown.
—@EllenHughesCrom

While we hope the health crisis is temporary, we know that right now many workers can be affected by economic collapse long into the future. That is the reason why it is important to think bigger and broader in terms of a policy response to this crisis. So even as I dusted off the chronology of policy actions that were taken in 2007 – 2009 (this booklet is 35 pages long!), my sense is that we are thinking along the lines of an old playbook that doesn’t directly target help for workers who are laid off because of a health crisis shutdown. I am hoping that the economic data coming up will help to change views about what is necessary and move up beyond the conventional way of thinking.

That is why I am urging that we morph into a new phase. Clearly the jobless claims are the tip of the iceberg. Somehow, we must get the Government to support companies and keep people on payroll. Our old playbook from 2008-09 doesn’t match what we are confronting which is a massive economic shutdown. $1.3 trillion is not enough.

The economy is huge with over $20 trillion in activity and, as of last month, nearly 130 million jobs. I think we have been thinking in terms of policy responses that don’t match the size of the challenge. To combat this crisis, however temporary (and we hope it is temporary), we need a bigger boatload of support. Could this be a $5 trillion program of support? Sure. The US Treasury can issue bonds to drum up the funds to infuse businesses for these payroll subsidies. A portion of the support, especially for large corporations, could consider granting the US taxpayer with equity ownership in these firms. After the crisis is over, and over time, these equity stakes will likely be valuable and help to defray the cost of this policy action. I think a portion of this program could also be bridge loans, as Andrew Ross Sorkin proposes in his New York Times article yesterday.

There are over 9 million workers in the leisure and hospitality sector where layoffs are cascading across all businesses hampered by the shutdown, @EllenHughesCrom says.

This type of massive response would help workers on the cusp of unemployment. For example, Marriott Hotels and others have already let go thousands of workers. Movie theater owners are looking for a bailout. According to Challenger & Gray, there are over 9 million workers in the leisure and hospitality sector in the areas noted in the table below. The layoffs are cascading across all businesses hampered by the shutdown.

In other policy news, the Federal Reserve is at it again. At 11:30PM ET last night, the Fed launched another liquidity facility called l the Money Market Mutual Fund Liquidity Facility (MMLF). They will lend money to banks that purchase financial assets from the money market mutual funds, including commercial. As the release describes, “Money market funds are common investment tools for families, businesses, and a range of companies. The MMLF will assist money market funds in meeting demands for redemptions by households and other investors, enhancing overall market functioning and credit provision to the broader economy.”

The Fed also expanded what are called currency swap lines with other global central banks. During this period of financial distress, there is a global shortage of US dollars. The Fed undertakes exchanges of dollars for other currencies with these central banks in order to alleviate this stress. This was a very important set of actions that global central banks undertook during the Global Financial Crisis of 2008 – 09 and are invaluable for easing the tightness in financial conditions.

Finally, the President signed into law a $100 billion plus package (Phase 2) including paid sick and family leave, food program support, enhanced unemployment insurance benefits, and free COVID testing. This set of stimulus measures is a pre-nuptial for something much, much bigger in coming days.