For decades, candidates of both parties have used the language of the American Dream to inspire voters. Speaking to voters’ hopes for upward mobility and a better future for themselves and their families, politicians portray themselves as the best choice for building an America where those dreams are attainable. But six months into a global pandemic that has upended American life, and more than three years into a tumultuous and divisive presidency, many voters are skeptical that the American Dream still exists, or that it includes them.

In polling conducted by Third Way and Avalanche Insights, suburban voters were asked the extent to which they believe the following story of America to be true:

Many people grew up believing that America is the land of freedom and opportunity, where every American has a chance of fulfilling their dreams, and where any person who works hard can get a fair shake at a good life. 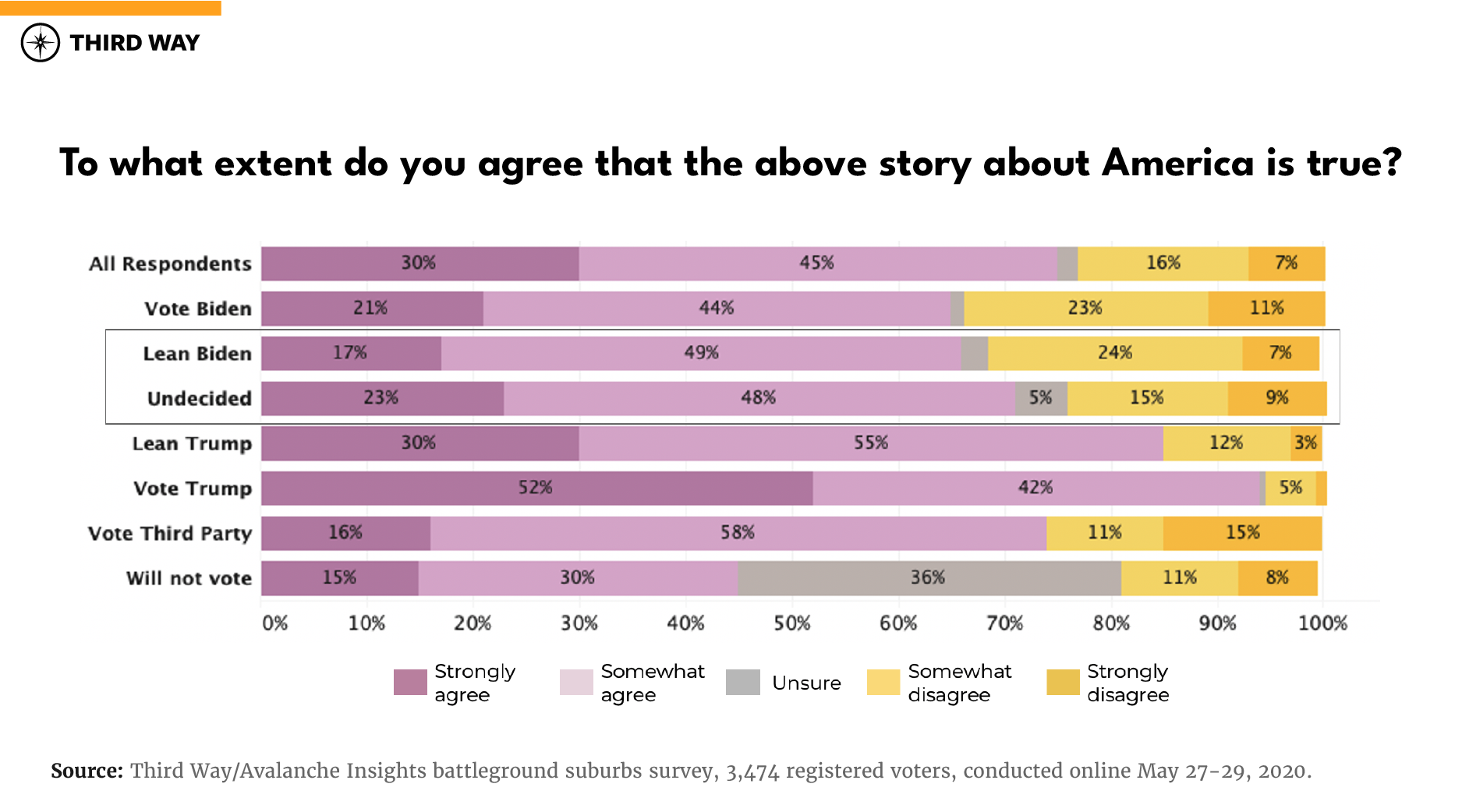 Not only are the voters that Democrats need to win unconvinced that the American dream is true, but thinking about it elicits negative emotions for these voters. When asked in an open-ended question how they feel about America today, the most prominent sentiment among both voters leaning toward Biden and undecided voters is sadness; 21% of lean-Biden voters report feeling sadness about America today, while 17% of undecided voters say the same. 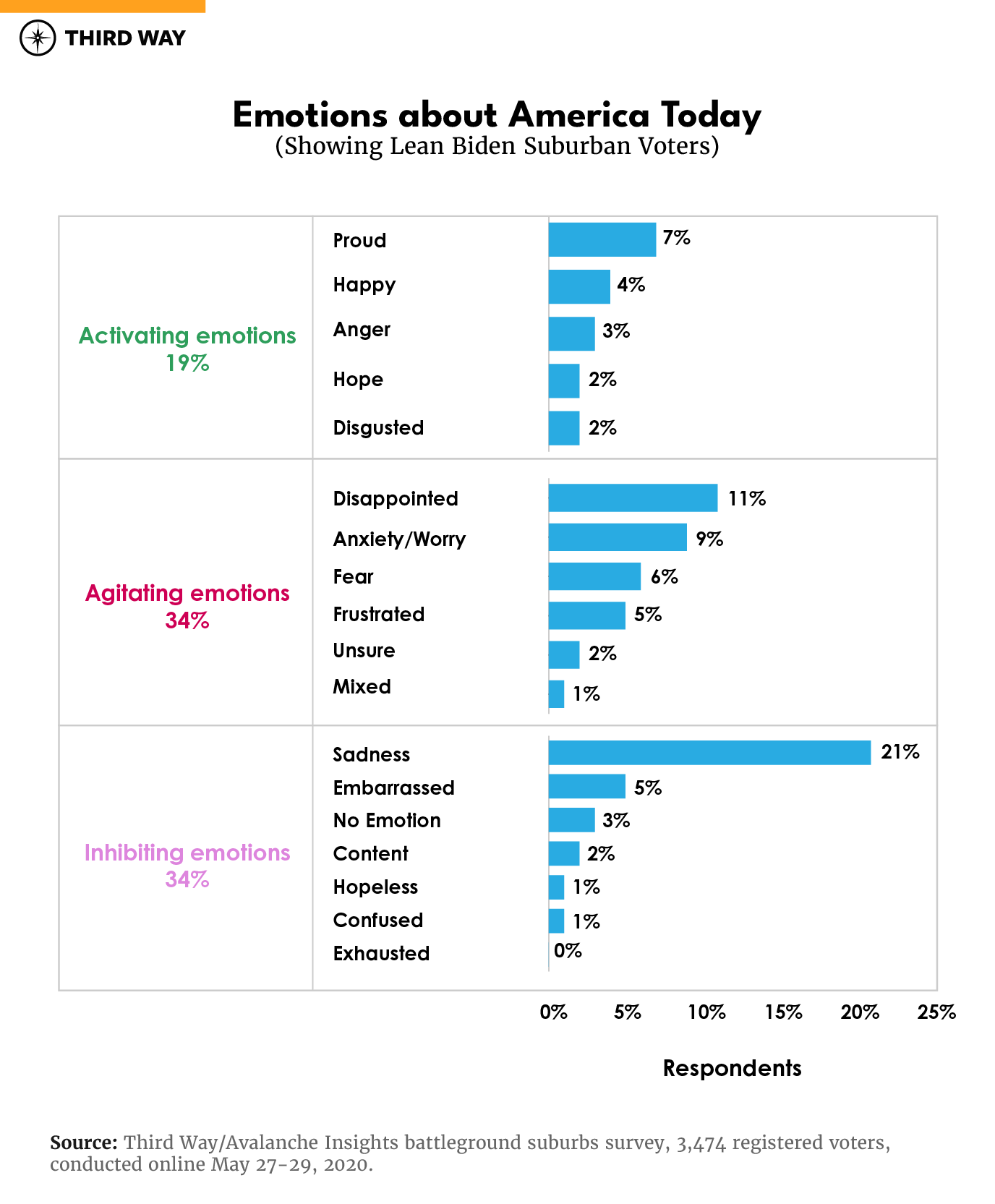 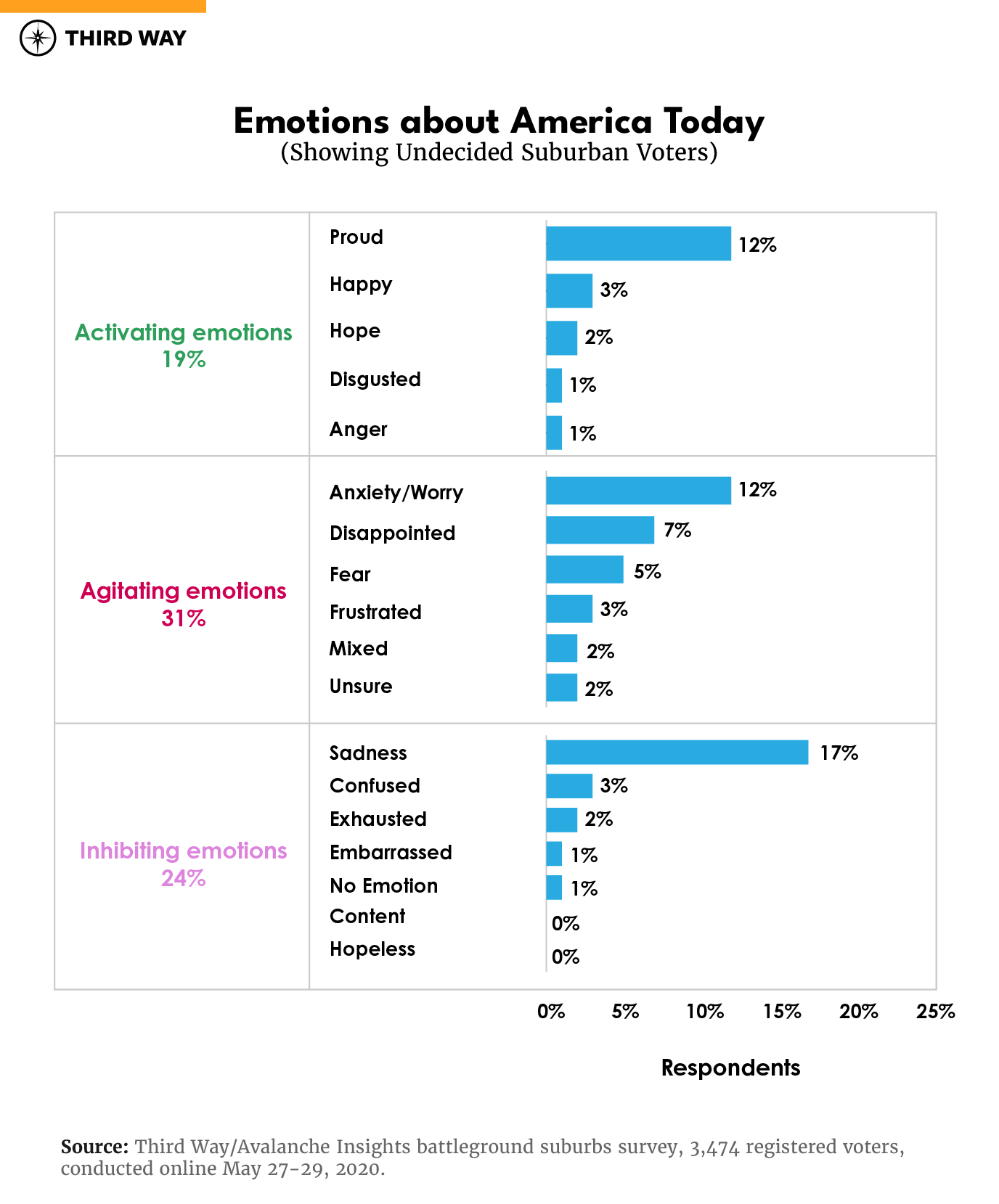 Sadness is an inhibiting emotion. Rather than driving people to make a change and better their situations, it makes them want to give up. To make sure that these key swing voters come out for Democrats and are not driven to cynicism, Democrats need to recognize their skepticism about the American Dream, understand the causes of that skepticism and offer pathways to reclaim the American Dream.

Lean-Biden and undecided voters mostly agree on motivating factors for their negative feelings about America today; both focus on leadership and inequality as the primary reasons why their views of America have changed over the past four years. In another open-ended question, a quarter of lean-Biden voters say they are skeptical of the American Dream today because of our leadership, while 15% feel this way because of inequality and justice. Undecided voters also cite leadership (19%) and inequality (19%) as reasons why their views of America have changed.

To acknowledge and address this skepticism, Democrats need to take on the principal causes of voters’ disillusionment. Leadership is the top issue motivating these negative feelings for both groups of voters, and by offering competent, honest, and empathetic leadership as an alternative to Trump, Democrats may be able to motivate these voters to turn out for Biden. However, policy stances and rhetoric around those policies will be an important consideration as well. Because issues of inequality and justice are top concerns motivating negative feelings around the American Dream, Democrats need to acknowledge the inequality and injustice of our society today in clear and specific terms and put forward bold and forward-thinking policies that address these crises.

The argument that Trump needs to make is easier. Because a vast majority of his voters believe the American Dream still holds true, he can tell them he is offering them more of what he has done the past four years. Democrats’ job is harder – they need to show a skeptical audience that they can offer pathways for making this country better.

The undecided and lean-Biden voters who will decide this election in the suburbs are skeptical that the American Dream is a reality right now. Skepticism can easily translate to cynicism, and voters who are cynical about the promise of America may stay home or be persuaded by Trump’s dark and destructive brand of politics. Democrats need to make an affirmative argument to these voters for how they can reclaim the story of America and make good on our promises as a country. Biden needs these voters to win in 2020, and he can win them over by showing them how the promise of America is within reach if we elect competent, forward-thinking leaders who will make real and substantive change.