Want More Students To Pay Down Their Loans? Help Them Graduate. 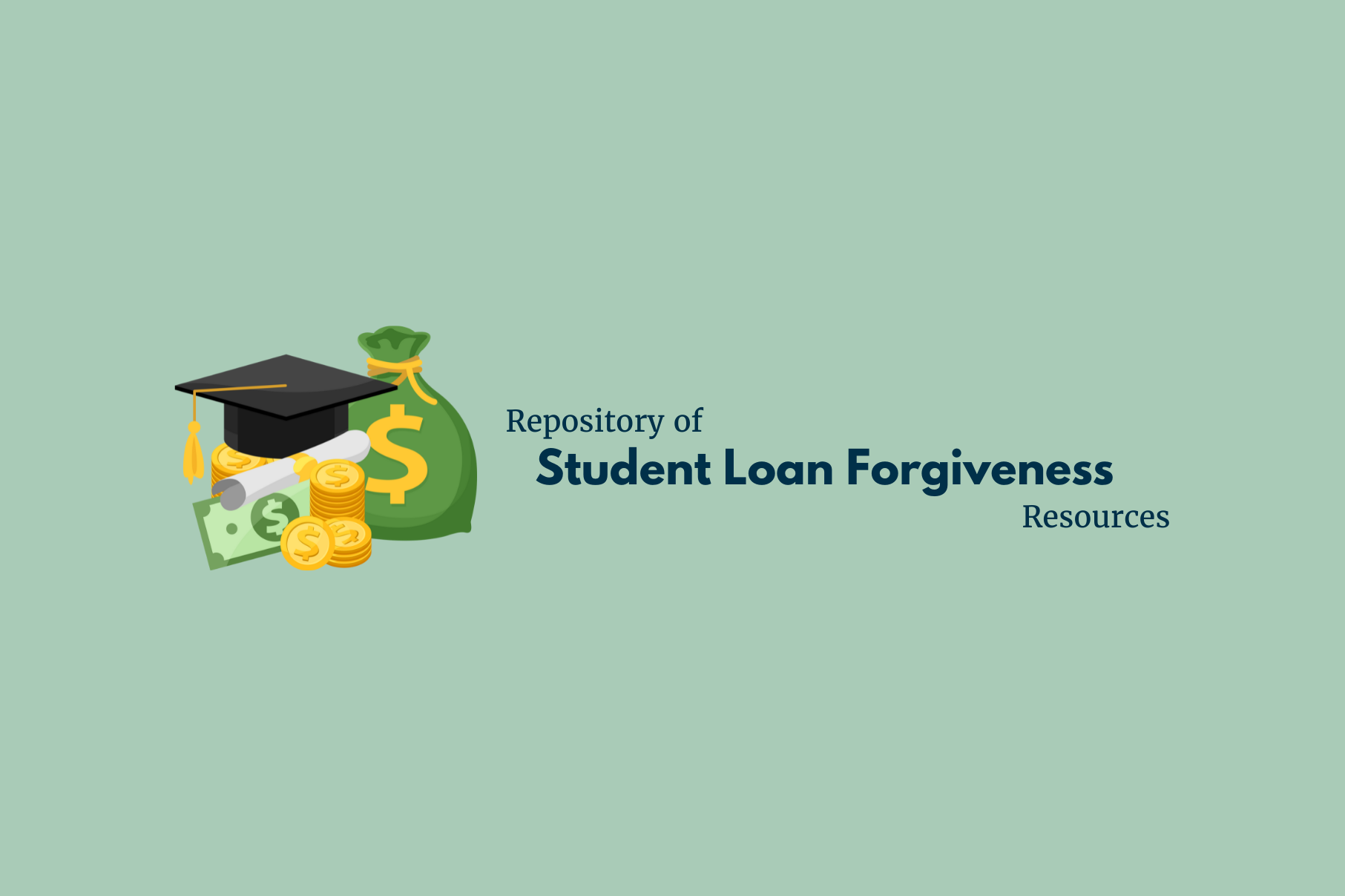 One hundred billion dollars annually.1 Nearly $30,000 on average for those earning a bachelor’s degree.2 That’s how much the federal government and students invest with the hopes of better equipping themselves to fill the jobs of tomorrow. And with most students nowadays needing to take out loans to attend the postsecondary program of their choice, it’s critical that the federal student loan program pay off for all parties involved.

Like with any investment, there’s risk involved. One of the biggest—for both students and the federal government—is that students will enroll in an institution, take out loans, but never complete their degrees. Unfortunately, this is an all too common occurrence, as more than half of students who enter an institution end up leaving without any sort of credential, even eight years later.3 This scenario often leads to one of the worst outcomes, as student borrowers who drop out with debt and no degree are three times more likely than graduates to default on their loans.4

As Congress considers the reauthorization of the Higher Education Act, it’s important to understand the role institutions play as stewards of this massive federal investment. Building off the work of Columbia University Professor Judith Scott-Clayton and Ben Miller from the Center for American Progress, who have both highlighted alarming disparities in student loan default and repayment rates between black and white students, this memo aims to examine the differences in loan repayment rates for different slices of student borrowers: those who complete an award or degree and those who never finish.5 What we found is clear: students who complete college are more likely to begin paying down their loans than those who don’t.

To examine loan repayment rates, we used the College Scorecard dataset, updated as of March 28, 2018, which measures the repayment rates for the most recent cohorts of student borrowers at one-year, three-year, five-year, and seven-year intervals after the cohort has officially began repayment on their federal student loans.6 In order to remove duplicate results, our sample only included institutions with unique 6-digit institutional identifiers from the office of Federal Student Aid. We chose to focus on institutions that primarily serve undergraduate students, only including institutions that predominantly award certificates, associate’s degrees, or bachelor’s degrees. We also removed schools that have recently closed down, as well as institutions that had missing, suppressed, or null data.

To determine a repayment rate, we calculated an average to reflect the number of borrowers who had paid down at least $1 on their loan principal versus the total number of borrowers in each repayment rate cohort. Completion status is determined though a report that institutions provide to the Department, which indicates whether or not a student borrower has earned any credential at an institution when he or she leaves school, whether it be a certificate award, associate’s degree, or a bachelor’s degree.

There’s a Substantial Repayment Gap Between Students Who Finish College and Those Who Don’t.

When examining the loan repayment data across all types and sectors of institutions, one finding is apparent: students who complete college are at least 20 percentage points more likely than non-completers to begin paying down their loan principal at every year of measurement. In fact, after just one year, those who complete college show a loan repayment rate 27 percentage points higher than non-completers, with most students who graduate successfully beginning the process of paying down their loan principal shortly after leaving. 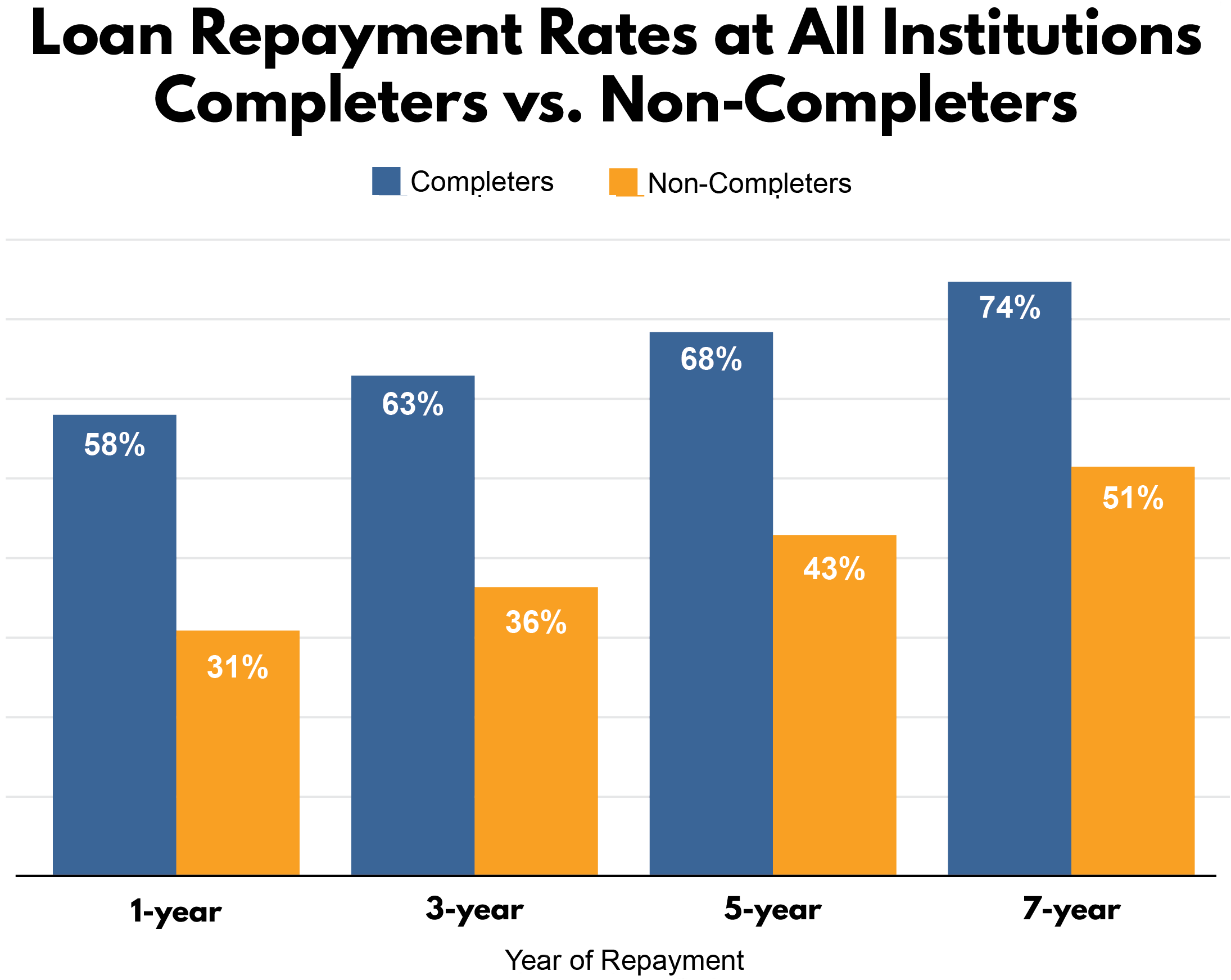 Completers are also more likely to make a dent in their loan principal in just one year (58%) after leaving college and entering repayment than non-completers are in year seven (51%). While the repayment gap between completers and non-completers narrows slightly as borrowers are given more time to repay, a noticeable gap remains throughout time. Nearly three-fourths of completers (74%) have made a dent in their loan principal seven years after entering repayment, while almost half of non-completers (49%) actually owe more on their federal loans than the amount they originally borrowed during this same time frame due to their inability to make sufficient payments to keep up with accruing interest.

The upshot: college completion is a key driver in making sure students are able to begin paying down their educational debt. Those who graduate can generally pay back their loans. Those who don’t can’t.

Loan Repayment Gaps Exist Between Completers and Non-Completers at Every Level of Institution.

In addition to differences in loan repayment between completers and non-completers, our analysis also finds that repayment rates vary widely for students attending four-year, two-year, and certificate-granting institutions. Despite bachelor’s degree recipients having higher debt burdens than other students, those who complete a degree at a four-year institution are 18 percentage points more likely to begin paying down their educational debt than students who have obtained an award or degree from a two-year institution and 28 percentage points more likely than those who earned a credential from a certificate-granting institution, even just one year after entering repayment.10 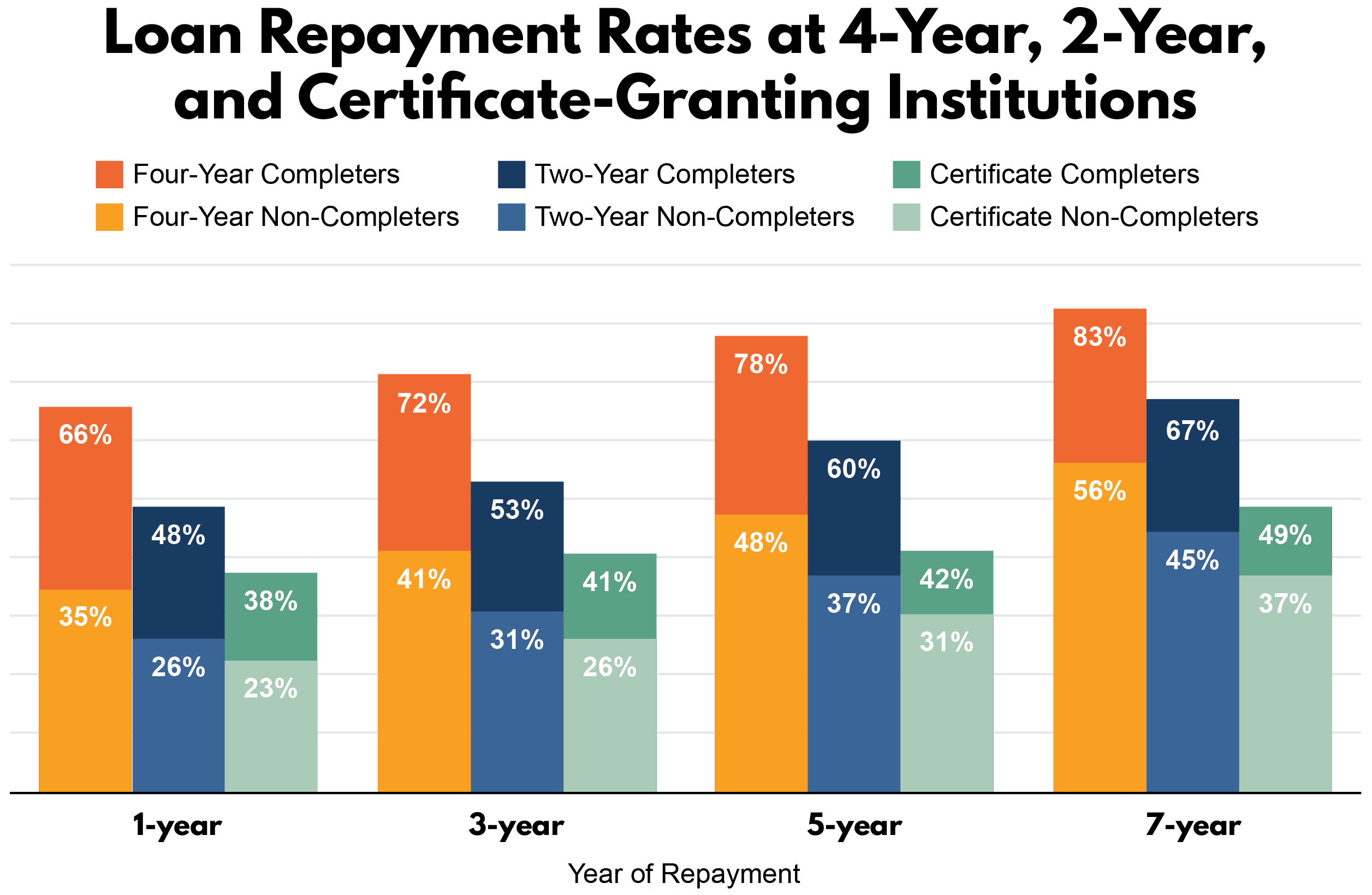 While four-year institutions show the strongest repayment rates, they also demonstrate the largest gaps between completers and non-completers. For example, 66 percent of completers at four-year institutions are able to begin making a dent in their loan principal after just one year, compared to just 35 percent of non-completers – a 31 percentage point gap. And while this gap barely narrows over time, a 27 percentage point gap in repayment stubbornly persists between these two groups, even seven years after they’ve left school.

At two-year institutions, which have been shown to demonstrate the lowest levels of college completion, earning an award or degree makes a noticeable difference in students’ ability to pay down their loans over time.11 In fact, nearly half of completers at two-year institutions (48%) begin paying down their loan principal in year one, and over two-thirds (67%) have done so by year seven. However, for student borrowers at two-year institutions who start but never finish, most (55%) will end up accruing interest on their original loan balance and owing more than they originally borrowed, even seven years after they left the institution and began repayment. Though some have questioned whether completion should be a measure of success for two-year institutions, these data clearly show that students who graduate from these schools are better off than those who don’t.

Despite having higher completion rates than two-year institutions, those who attend certificate-granting institutions experience the most difficulty in paying down their student debt.12 Consistent with outcomes from four-year and two-year schools, those who complete their program of study are more likely to begin the process of paying down their loan principal than those who fail to earn an academic credential. However, these data show that even completers at these schools have challenges, with less than half of student borrowers (49%) making a dent in their loan principal seven years after completing the certificate program of their choice. This suggests that many of these institutions leave even their graduates unable to earn a high enough salary to justify their initial educational investment.13

The upshot: longer-term programs are a more significant investment in time and money, but data shows that students who earn an award or degree from one of these institutions are in the best position to pay down their federal loans. And it’s clear that completion matters regardless of institution type, as across the board, those who are able to complete an award or degree are more likely to be able to pay down their educational debt than those who never finish.

While the decision to attend a four-year, two-year, or certificate-granting institution plays a role in students’ ability to pay down their educational debt, there are also clear differences in repayment rates depending on the sector of institution that students attend – whether it is public, private non-profit, or for-profit. Digging into the data, we see that public and private non-profit institutions show similar repayment outcomes, with most completers able to start paying off their loan principal shortly after earning an award or degree. However, the differences in loan repayment rates between completers and non-completers at both public and private non-profit institutions remain concerning, with both sectors exhibiting a gap of over 20 percentage points between these two groups across each year of measurement. 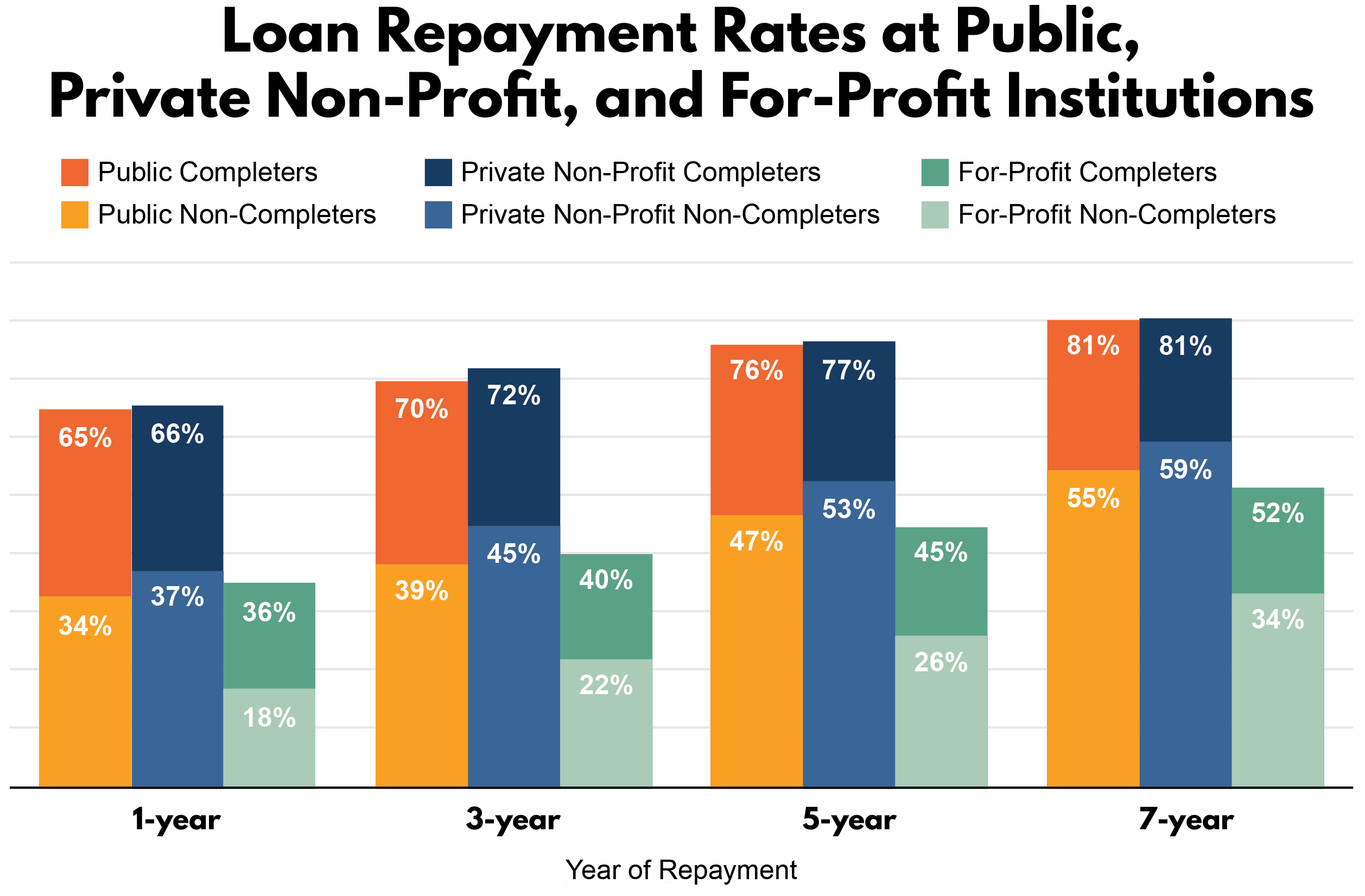 Yet the most alarming findings fall within the for-profit sector. For-profit institutions, which contain a higher concentration of certificate-granting schools, demonstrate more troubling trends for completers and non-completers alike. In fact, nearly half of all for-profit graduates (48%) still owe more than the amount they initially borrowed even seven years after earning a certificate or degree. And at the fifth and seventh year of loan repayment, those who complete their program from a for-profit institution still show a smaller likelihood of entering positive repayment status than non-completers at public and private institutions.

The disparity between sectors may in part be due to the type of programs each sector typically offers. For example, 82% of private non-profit institutions are bachelor’s degree-granting institutions, which primarily show better repayment outcomes, while 86% of for-profit institutions are primarily certificate-granting, which demonstrate much lower repayment rates.14 Regardless, repayment rate outcomes that show a large portion of students failing to pay down $1 on their loan principal, even seven years after entering repayment, raise questions about the value of the types of programs that each sector offers, the educational debt required to attend, and their effectiveness in preparing students for future economic success.

The upshot: while earning a certificate or degree at a public or private non-profit institution leads most students on a path to positive repayment outcomes shortly after graduation, completion at for-profit institutions still leaves nearly half of graduates owing more on their original loan amount, even seven years after entering repayment.

Most of today’s students require the use of loans to attend the higher education institution of their choice, and those borrowers hope that this financial investment­­ will eventually show a strong return. The federal government plays a major role as the primary lender for college students, as lawmakers distribute nearly $100 billion in federal student loans every single year.15 Not only do policymakers and taxpayers want this investment to lead to more Americans being better prepared for the jobs of tomorrow, it’s also assumed it will be recouped because institutions will serve students well and help them get to graduation, subsequently allowing those students to make good on their educational debt.

However, for all parties to benefit, we need more students who enter an institution to complete their studies. As this analysis shows, one of the biggest risk factors—for both students and the federal government—is that many student borrowers will leave without an award or degree in hand, losing out on the economic benefits that allow them to pay down their educational debt over time. As policymakers work toward a reauthorization of the Higher Education Act, it’s critical that they consider policies that hold schools accountable for their repayment rate and better target federal financial aid toward institutions that have proven they can serve borrowers and taxpayers well. If not, our system of higher education is likely to remain stagnant, leaving too many students without the credentials needed to set them on the path to successful repayment of their student loans and future economic security.