The results of our national poll are clear:

After the Supreme Court’s historic decisions striking down the Defense of Marriage Act and restoring marriage for gay couples in California, a full 30% of Americans now live in a state where gay couples can make the lifetime promise of marriage, and for the first time the federal government must respect those unions. Support for marriage has grown astronomically over the past few years, and a wave of leaders from both sides of the aisle has followed that progress. But the shrinking group of politicians who still oppose allowing gay couples to marry often argues that doing so would infringe on the religious liberty of marriage opponents. Third Way and the Human Rights Campaign joined with researchers at Anzalone Liszt Grove to conduct a nationwide poll to better understand how Americans believe marriage and non-discrimination laws impact religious liberty. The results are clear: voters know that our laws and the Constitution already robustly protect religious liberty, they do not think marriage or non-discrimination laws threaten Americans’ religious beliefs or practices, and they do not believe that allowing gay couples to marry requires passing new laws to allow businesses or individuals to deny services to gay people or couples.

2013 will be remembered as a pivotal year in our country’s evolution to full recognition for gay and lesbian couples: the year the Defense of Marriage Act was struck down as unconstitutional, the year California’s Proposition 8 was permanently invalidated, the year 30% of the country lived in one of the now 13 marriage states, and the year support for marriage became unquestionably the majority position among Americans nationwide. Our national poll, conducted just prior to the Supreme Court’s decisions, found 53% support for allowing gay and lesbian couples to marry, which included 63% of non-white voters, 56% of Independents, 50% of people without a college degree, and 58% of Christians under 50 years old.1

Surpassing 50% support nationwide can be at least partially attributed to the public’s evolving understanding of gay couples and their relationships. Twenty years ago, only 42% of Americans said they knew someone who was gay or lesbian, but today that number is 87%.2 And according to our poll, a full 35% of the country now knows a gay couple who has either married or held a commitment ceremony.

Do You Think Gay Couples Want to Join the Institution of Marriage or Change it?

Support for Non-Discrimination Laws and Opposition to Laws Denying Services

Americans are not only solid in their support for allowing gay couples to marry, but they are strongly supportive of non-discrimination laws and opposed to any new legislation that would allow services to be denied to gay individuals or couples. In fact, when it comes to religious exemptions, voters are clear that they should be limited to places like churches and synagogues and people like pastors, priests, and rabbis.

By and large, Americans already believe it is illegal for business owners to refuse to provide products or services to a gay customer—only 16% of respondents believed that such an act would be legal in their state. And public support for such non-discrimination laws can be seen both in the states that have already enacted them and in those that have not. Currently, 44% of Americans live in one of the 21 states (and the District of Columbia) with non-discrimination laws that include sexual orientation.3 But even Americans who live in states without non-discrimination laws thought it was already illegal to deny a gay person service—more than half of those who believed it was illegal were incorrect and actually live in a place that doesn’t yet prohibit such discrimination (30% of respondents overall thought it was illegal in their state when it wasn’t).

When asked about creating new laws which would allow government employees, businesses, organizations, or individuals to refuse to serve gay people or couples based on religious objections, voters were decidedly averse. Americans recognize the need to both protect gay people and religious liberty, but they believe that we’ve already achieved the latter in current law. They supported existing protections that ensure that clergy and churches need not perform any marriage that conflicts with their faith, but they think religious exemptions should be limited to those circumstances.

As this poll demonstrates, most Americans do not think non-discrimination laws infringe on religious liberty, and they are opposed to passing new laws or creating exemptions or loopholes that would allow discrimination against gay individuals or couples. Sixty-seven percent—two-thirds of voters—said they agreed with the statement that “our laws already strike the right balance when it comes to religious liberty and small business, and we should not change that.”

The public is most adamant about this principle when it comes to government employees. By a stunning margin of 48 points, 71% to 23%, Americans say that a county clerk should not be able to refuse to issue a marriage license to a gay couple in a state where that marriage would be legal. By a margin of 46 points, 69% to 23%, voters say that a federal employee should not be able to refuse to review an immigration application for a spouse of a gay American citizen, a situation that would be possible for the first time now that the Defense of Marriage Act has been struck down. These statistics illustrate the strongly held belief that government should treat everyone equally under the law, and that the individual religious beliefs of any individual agent of the government shouldn’t stand in the way.

Should Government Employees be Able to Refuse Service to Gay Couples? 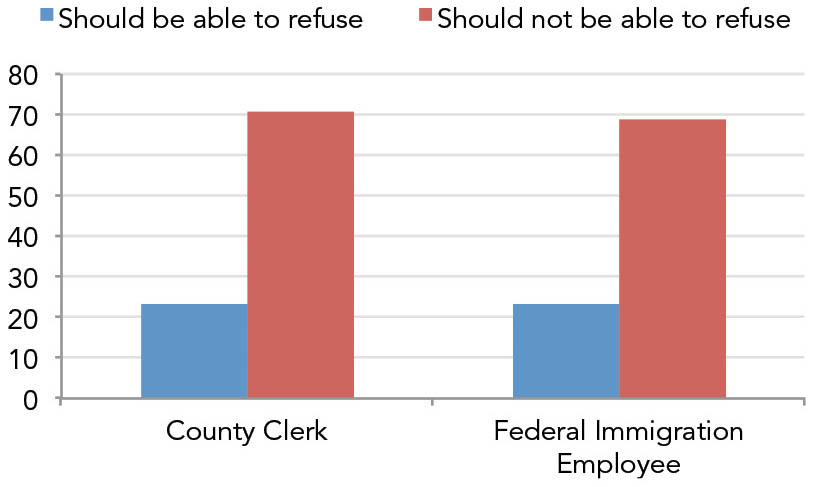 When it comes to non-government entities, the public is just as clear. Americans oppose allowing businesses or individuals to ignore non-discrimination laws because of their religious beliefs. Sixty-nine percent of Americans don’t think a business owner should be allowed to refuse to provide products or services to an individual because that person is gay or lesbian, compared to an incredibly small 15% that do. And when asked about small business owners in particular, a full 68% of Americans don’t think they should be able to refuse service to gays or lesbians, regardless of their religious beliefs. This supermajority included 55% of Republicans, 75% of Independents, 67% of people without college degrees, and 68% of Christians.

Should Private Actors be able to Refuse Service to a Gay Person? 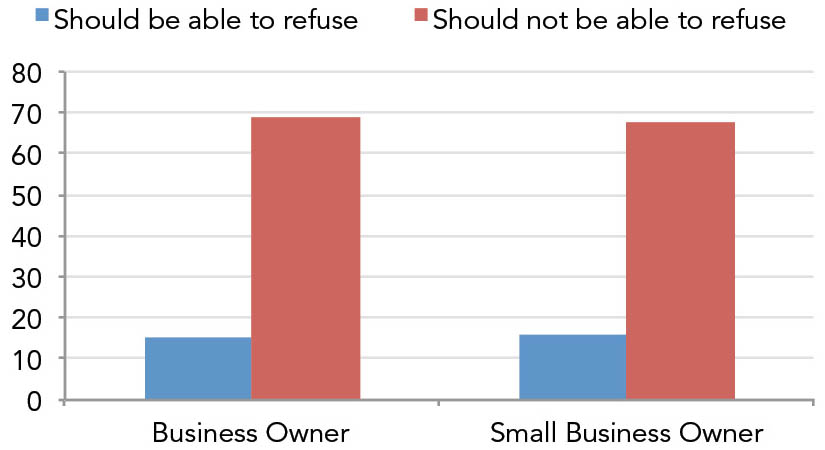 For the most part, voters feel the same way about the provision of commercial services for a gay couple’s wedding as they do about providing services for gay individuals in general: the majority of respondents said that gay and lesbian couples should be treated equally in all aspects of life, including when shopping for contractors for their weddings. When asked if they would favor or oppose a law that would allow businesses or organizations to deny services to gay and lesbian couples based on religious objections, 67% of voters were opposed—52% of them strongly—compared to only 25% who would be in favor of such laws. This opposition was nearly universal, regardless of race, gender, religion, or education level. Even Republicans, who had the lowest level of opposition at 48%, were not in favor of new laws allowing businesses and organizations to deny services to gay couples—only 39% supported such laws.

When asking specifically about wedding-related services, like catering, flowers, or cakes, being provided by small businesses, these numbers hardly changed at all: 64% of voters were still opposed to new laws that would allow small businesses to deny wedding-related services based on their religious beliefs, compared to 31% in favor. That’s a 33-point margin of opposition. Again, not a single demographic group favored such laws more than they opposed them. Support was highest at 48% among Republicans—still a point below the 49% in opposition. This is because most voters don’t consider wedding-related services to be unique, and they don’t think their providers need any special loopholes in the laws to allow them to avoid providing commercial services for weddings of gay or lesbian couples. A full 54% of respondents believe it is wrong for a business to deny wedding-related services to a gay couple, while only 15% agreed that “wedding-related services are different and people should be allowed to refuse for religious reasons.” Those who believe weddings are different, were torn, or said they didn’t know trended more towards Republicans, voters over the age of 50, Catholics, and people without college degrees. But still, 52% of Christians, 61% of non-Christian religious believers, and 65% of the non-religious did not think providing commercial services for a wedding was in any way deserving of special exemptions to non-discrimination laws. That’s because unlike a clergy member performing a ceremony, only 10% of respondents actually thought that when a business provides services like flowers or food for a gay couple’s wedding, that the business is telling the world it supports marriage for gay couples, compared to 57% who say that doing so is simply fulfilling a contract for services.

Even when we dug deeper and asked about specific services and professions, respondents still overwhelming believed that businesses should not be able to deny services to gay customers—largely regardless of whether they were purchasing services as an individual or as a couple for a wedding:

Should We Allow Refusal of Service to Gay People and Couples? 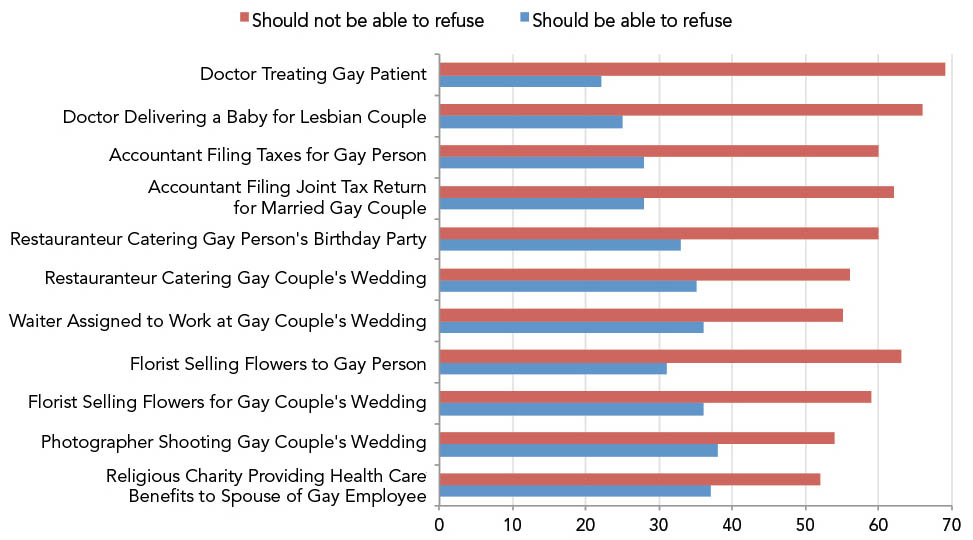 The only situation in which respondents felt someone should be allowed to refuse to provide a wedding-related service for a gay couple was when the provider was a church or clergy member and that service was the religious solemnization of that marriage—the actual performance of the wedding ceremony. In that case, 61% of voters felt the clergy member or church should be able to refuse to perform the ceremony, compared to 28% who felt they should not. As it turns out, this tracks perfectly with the law, because the First Amendment of the Constitution—and the marriage laws in states that have allowed gay couples to marry—already protect any church, clergy member, or religious leader from being forced to recognize, solemnize, or celebrate any marriage. Americans drew a sharp line between religious services, which a person has a right to decline, and commercial services, where all customers who are able to pay should be able to purchase the service.

The lessons learned from this poll will only become more important as our country continues to move forward toward the day when all couples can make a lifetime commitment to each other in marriage. Ours is a nation built on the principle of equal protection under the law, and the public believes that current laws provide appropriate protections for those with religious objections to marriage without creating an untenable situation in which people can simply ignore existing non-discrimination laws. Americans don’t believe that religious liberty is infringed by allowing gay couples to marry, because they know that the First Amendment protects clergy and churches from being forced to recognize or celebrate any marriage to which they object. And there is widespread opposition to the creation of new laws, exemptions, or loopholes that would allow government employees, large or small businesses, or organizations to refuse to provide commercial services to gay individuals or couples, regardless of whether those services are directly related a wedding. Above all, Americans believe everyone should be treated equally under the law.