The Deciders: Moderates in 2010

Amid growing concerns over an “enthusiasm gap,” many are urging Democrats to focus on rallying the base. By carrying a left-leaning message and agenda, so the argument goes, Democrats can reactivate liberal enthusiasm to match the Tea Party’s passion.

Motivating the liberal base is necessary for Democrats to keep their seats—but it’s not sufficient:

The upshot: Moderates matter more than ever.

Democrats can compensate for the votes lost to a larger conservative base by wooing moderates. Moreover, in states with a hotly contested match-up, Democratic candidates need a majority of moderate votes—if not a super-majority—to win or maintain a seat. To preserve their fortunes this fall, Democrats should focus as much (or more) on moderates as they do their liberal base.

Since the 1970s and until very recently, the ideological makeup of the American electorate has been remarkably stable, averaging 20% liberal, 47% moderate and 33% conservative.2

But since 2008, many commentators3 have noticed a dramatic increase in the number of self-identified conservatives, and according to Gallup, the share of Americans who call themselves “conservative” nationwide is now at a record-high since 1992.4 From 2008 to 2010, conservatives as a share of the national electorate rose from 37% to 42%, while the share of liberals and moderates declined (from 22% to 20% and from 37% to 35%, respectively).5 *

* The following table includes a sample of these recent polls:

On a state-by-state basis, according to Gallup, conservatives have also increased their share of the electorate in 23 states (and in some states by significant margins), while liberals have seen only modest gains in eight states.7 Eighteen states have increased their share of moderates, but in many of these states, a gain in moderate voters has come at the expense of liberals.

In no state do liberals make up a majority—or even a plurality—of the electorate. Even in Rhode Island—currently the most liberal state in the country and the only state in which liberals outnumber conservatives (by 3-points)—moderates outnumber liberals 36% to 32%. In the country’s second-most liberal state, Connecticut, conservatives and moderates both outnumber liberals with respective shares of 32%, 34% and 29% of the populace.8

* These electoral realities also explain why conservatives can succeed with a strategy aimed at the conservative base. They are much less dependent on moderates to pull them over the finish line.

In 2008, President Obama won 20% of conservatives, 60% of moderates and 89% of liberals—an all-around stellar performance compared to recent Democratic presidential candidates.

But the combination of a relatively small liberal base and a shift toward conservatism means that matching President Obama’s performance in 2008 may not be enough in 2010 to carry a Democrat to victory.

We chose 21 states with either a highly competitive Senate or state-wide House race. We calculated the share of the total vote that a Democratic candidate would receive if he or she won the same percentage of liberals, moderates and conservatives that President Obama did in 2008, based on the current ideological breakdown for that state according to Gallup. We also assumed that on Election Day, the actual turnout among voters would match those proportions.*

* Arguably, this is a best-case scenario. If disgruntled moderates or liberals stay home and conservatives are highly energized, the ideological makeup of the voters who actually show up at the ballot box might be skewed even more to the right.

In Colorado, for example, conservatives currently make up 37% of the electorate, while moderates make up 33% and liberals account for 27%. If a state-wide candidate matches President Obama’s performance to win 20% of conservatives, 60% of moderates and 89% of liberals, that candidate would just squeak by—winning 51% of the total votes.9

In Indiana, on the other hand, where conservatives now make up 42% of the electorate, while moderates make up 39% and liberals 16%, matching the President’s performance would garner just 46% of the total vote.10

The following chart shows the hypothetical performance of a Democratic Senate or House candidate in these 21 chosen states. In 16 of these 21 states, a Democratic candidate who simply matches President Obama’s 2008 performance will lose. In just five states—Colorado, Connecticut, Delaware, Oregon and Washington—matching 2008 is enough to win. 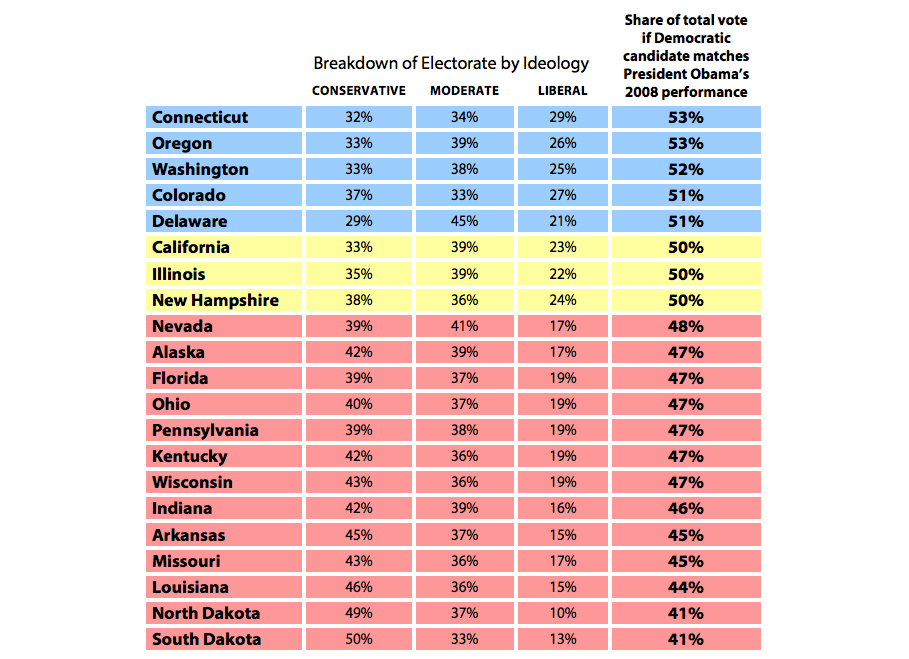 The Deciders: Moderates in 2010

Democratic candidates can, however, compensate for a rightward shift in their state by courting moderates.

The following chart shows the percentage of moderates a candidate would need to win in a particular state to garner 50.1% of the total vote (assuming he or she matched President Obama’s performance with liberals and conservatives). The chart also shows the improvement over President Obama’s national performance that a candidate would need to reach that threshold. 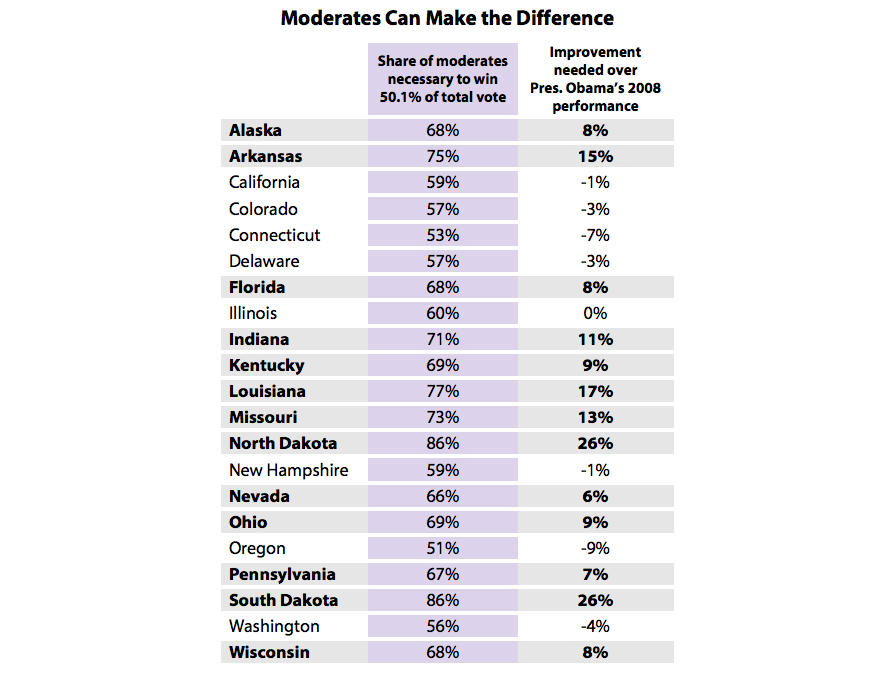 Democrats are right to focus on their base. But just as important to the fortunes of Democrats this fall are moderates. While the middle has always played a pivotal role in American electoral politics, where they swing this fall will certainly decide the fate of the Democratic majority.