The Case Against Fee-for-Service Health Care

Fee-for-service health care is hurting patients and driving up costs. The lack of accountability in the fee-for-service system allows doctors, hospitals, insurance companies, and pharmaceutical companies to point the finger at one another when things go wrong. The result? Patients are at risk and prices skyrocket. Due to fee-for-service, some patients get too much care, some do not get enough, and others get the wrong care. They all get inflated bills. The United States deserves a better health care system—one that is accountable for quality and costs.

After going to an emergency room in Colorado for a severe pain in her belly, Claire Lang-Ree, a college student, received a bill for nearly $19,000 that included charges for an “IV push.”1 The charges included $700 each time a nurse pumped a drug into Claire intravenously. The drugs helped control the discomfort from what turned out to be a ruptured ovarian cyst, which is not life-threatening but painful. But the extra charges for the IV push are relatively new. In Claire’s case, the insurance company blocked the extra charges, but hospitals are increasingly getting paid for them and the rates are going up.2

An IV push is just one of more than 10,000 medical services for which providers can bill.3 Since that billing system began in 1966, the number of codes for billable services has tripled. The sheer size and complexity of this system, which is known as fee-for-service medicine, perpetuates itself as providers look for new ways to increase their revenue. It is not, however, tied to improving care for patients because it is based on what providers do, not how patients fare. The lack of accountability of fee-for-service medicine is hurting patients and driving up costs.

In this report, we look at what the fee-for-service system is and the effects it has on patients and overall costs. We show that the structure of fee-for-service has created incentives that are completely backwards. It creates two sets of major problems: 1) some patients get too much care, some not enough, and others get the wrong care; and 2) it drives up prices because no one is accountable for the outcomes from the care patients receive.

But what does it mean to bill for each service or product? Let’s take Claire—the hospital billed her for multiple parts of her stay in the emergency room on top of a flat basic rate: the lab tests, a scan, IV drugs, the IV pushes, and $6.50 for a pill.5 Her health plan blocked most of the separate charges, but hospitals continue to bill separate charges when a patient goes out-of-network for health care or does not have insurance. 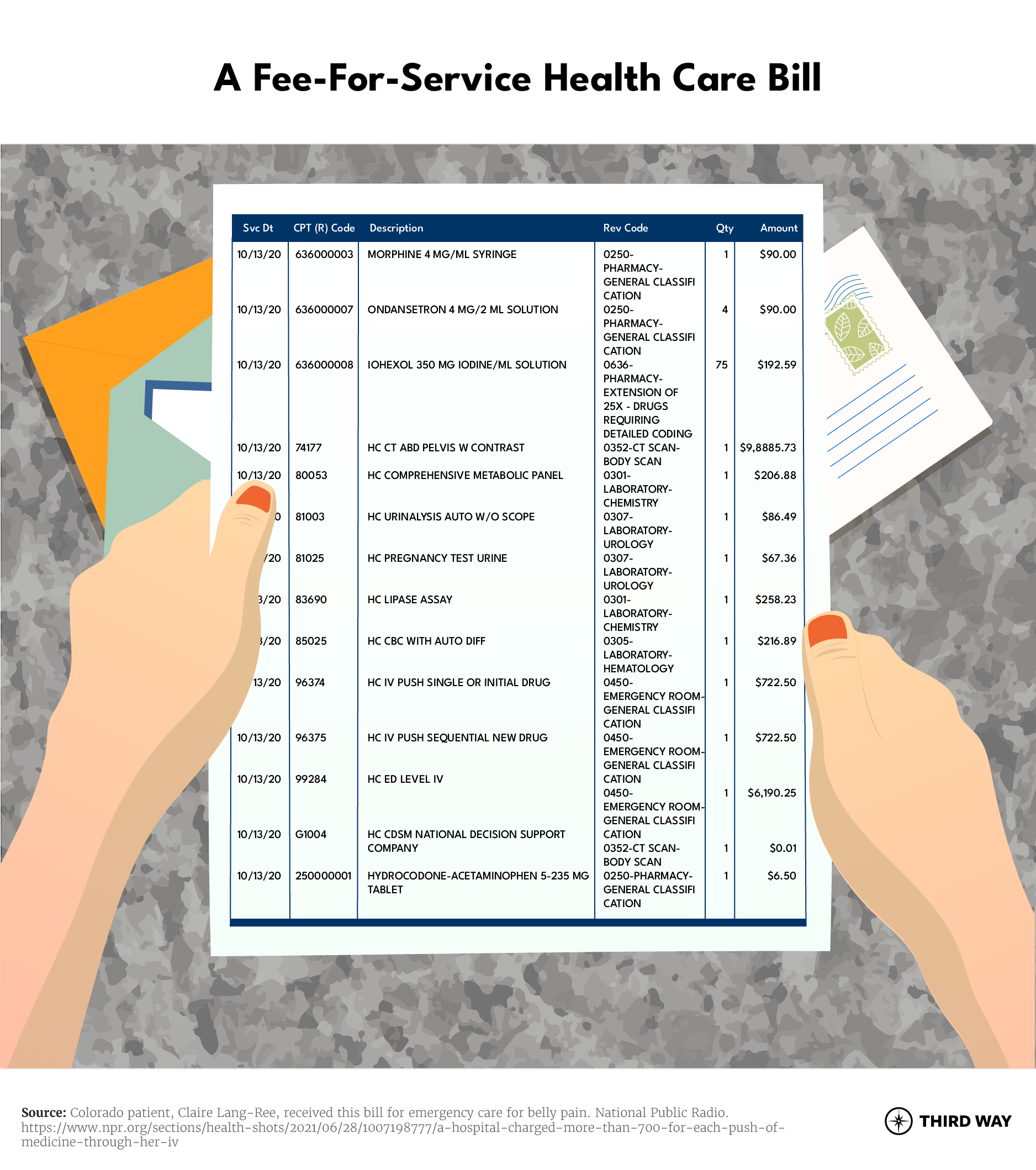 While each product or service is billed individually in a fee-for-service system, the maximum price of each line on the bill is calculated by asking two things:

A doctor’s office or hospital enters those codes into a medical billing system, which generates the greatest possible amount of money to bill a health plan for the services. When a health plan like Medicare or a private insurer receive the bill, they check to make sure that the procedures line up with the patient’s diagnosis code (ICD-10 code) and are not exaggerated or unnecessary. They also make sure the patient has coverage for the services provided. Then the health plan assigns the standard amount they pay for those services. The calculation of that amount differs depending on whether the patient uses Medicare or private insurance.

For those using Medicare, a “fee schedule” generates the cost based on the codes for the medical billing system. This schedule, maintained by the Centers for Medicare and Medicaid Services (CMS) and set by Congress, lists the maximum payment a clinician receives for a specific service from Medicare.8 Medicare then adjusts payments down based on factors such as geography or skill required for a procedure. For example, a service provided in Des Moines, IA will be discounted more than the same service provided in San Francisco, CA because it costs less to practice medicine in Iowa.9

Determining the actual cost for patients with private insurance is opaque. Private health plans negotiate rates for services with hospitals and doctors. When codes are entered into the billing system, the price of that service is the negotiated rate between the health plan and provider for in-network care. With numerous health plans and medical providers in different markets, those negotiated rates vary widely. A regulation issued under the Trump Administration sought to make the negotiated prices transparent by requiring hospitals to publish online a list of 300 services that patients can use to compare prices before they choose a hospital.10 But compliance with the regulation has been very low.11 Members of Congress and the Administration are pushing to increase the penalties on hospitals not complying.12

The sheer number of codes and billing rules can be onerous and inefficient. To address this, Medicare created the Diagnosis Related Group system (DRGs) in the 1980s to make hospital billing more efficient. DRGs reduced the thousands of inpatient ICD-10 billing codes to about 750 commonly used combinations.13 For example, treating a patient with a hip fracture is DRG 210. Medicare calculates the price of this DRG from the average cost of care for a “typical” patient in that group and then adjusts for a variety of factors such as age and geography. For the patient with a hip fracture, the DRG price would increase if the patient was older, if the care took place in a city with a higher cost of living, or if that patient was diagnosed with a secondary condition like osteoporosis.14 While DRGs incentivize hospitals to be more efficient in coordinating care and controlling costs, they do not extend to most physicians’ charges, and therefore don’t encourage integration across the health system.

With a set price for the services that goes into care, the fee-for-service system leads to more volume—do more services, get more money regardless of patient outcomes.

The structure of fee-for-service has created incentives that are completely backwards. The lack of accountability in the fee-for-service system allows doctors, hospitals, insurance companies, and pharmaceutical companies to point the finger at one another when things go wrong. The result? Fee-for-service hurts patients and drives up costs. Due to fee-for-service, some patients get too much care, some do not get enough, and others get the wrong care. Each of these three outcomes is explored further below.

First, some patients get too much care. Physicians report that 20% of medical care is unnecessary, including 22% of prescribed medication, 25% of tests, and 11% of procedures.15 This is also called over-treatment or over-testing. That should not be a surprise under the current incentives—when a medical resource is available and profitable, a hospital or doctor is more likely to use that resource. For example, a Dartmouth Atlas Project study found that in regions with more hospital beds, patients are more likely to be admitted to the hospital. Similarly, in regions with more intensive care unit (ICU) beds, more patients will be cared for in the ICU. And more specialty doctors means patients have more specialty visits.16

Fundamentally, fee-for-service rewards volume and high prices over quality. While the vast majority of medical doctors work every day to make patients better, the system’s incentives are still completely flawed. If a doctor or nurse tries to become more efficient and curb overuse, the system punishes the hospital or office where they work because reimbursements go down. Picture this: A patient comes home from surgery, only to have to return to the hospital to fix a mistake. Under fee-for-service, clinicians and hospitals are paid more for worse outcomes because more care is needed.17 To add insult to injury, the patient still pays the bill for that readmission or failed procedure.

Second, some patients do not receive enough care. Also called underuse, patients often do not get enough of the care they need. This takes many forms—from limited access to health care, to an inadequate supply of providers, to unaffordable treatments, to the slow uptake of innovations.26 It is a huge problem: underuse is four times more common than overuse.27 It also drives much of the racial and ethnic disparities in health care.28

Further, fee-for-service drives up costs which causes patients with limited financial resources to cut back necessary medical care and medications. One-in-four diabetic patients report using less insulin than prescribed due to the high costs. Underusing insulin increases a patient’s risk of severe complications and early death.32 Those conditions are all far more expensive than taking insulin. Yet, the price many patients pay out-of-pocket for insulin has risen significantly, which is partly due to a complicated pricing system for drugs.33 Underusing necessary care hurts patients and causes downstream care to be more common and expensive.

When doctors are not accountable for or paid for the health of their patients, they do little to get them preventive care. In other words, treating sick patients is more profitable than keeping patients healthy. But this is not the doctor’s fault. Underuse occurs because of fee-for-service. When construction workers get paid to build a house, that’s what they do. They will not manicure the lawn, build a pool, or buy furniture for that house because that’s not what they are paid to do. When the payment system only pays for the treatment of illness, that is what the doctor is going to focus on.

That underuse hurts patients and drives up costs. An estimated 45% of patients are not receiving recommended care.34 This has serious repercussions:

Third, some patients get the wrong care. In these instances, sometimes called misused care, a patient does not fully benefit from a treatment, does not get the right treatment, or experiences errors in their treatment. In a single year, 25%-42% of Medicare patients will receive a low-value or useless test or treatment.42 That means millions of people are receiving drugs they do not need, operations that are not beneficial, and scans and tests that do nothing to fix the problem.

That misuse harms patients and drives up costs. Misuse of care is at best a waste of money and at worst life-threatening to a patient. For example:

Just as fee-for-service distorts patient care, it also drives up prices. For effective competition, health care purchasers—consumers, employers, and insurance plans—need to compare the price and quality of providers to benefit from choices about their care and providers. But in the face of bills for more than 10,000 kinds of services, health care purchasers have little chance of demanding better value. No one could shop for a car if you first had to buy all the parts and assemble it yourself.

Fee-for-service has four separate but compounding problems that drive up health care prices:

The lack of transparency and accountability have compounded the problem of provider pricing power and rising administrative costs. Without a big change in the fee-for-service payment, whatever minimal benefits of competition that exist today in health care will completely erode.

Experts on the right and left agree: our health care system is a mess because the incentives are wrong.51 The key source of the problem is fee-for-service payments to physicians, hospitals, nursing homes, and other health care providers, which bill separately for each service or health care product they provide. This structure has created a series of perverse incentives and utter lack of accountability. As a result, fee for service hurts patients and drives up costs.

Patients, families, and taxpayers deserve better. By understanding what fee-for-service is and the harm it inflicts, policymakers can then consider alternatives under development by public and private health plans. The nation must move to a system that rewards value, not volume. A move toward value-based payments could drive down costs, vastly improve the quality of care, and ensure a far more equitable system.