6 Reasons to Celebrate Broadband in the Infrastructure Bill

Chances are you’re using broadband to download and read this report. You might have also used broadband to look for a job, connect with your doctor, and submit your child’s homework to their teacher. But millions of unconnected Americans are missing out on the economic, health, and educational opportunities broadband provides. Luckily, with the passage of the Infrastructure Investment and Jobs Act, also known as the bipartisan infrastructure bill, President Joe Biden and Congress made one of the largest investments ever in expanding broadband and closing the digital divide. The result? Massive wins for American families throughout the country.

In this brief, we explain what the infrastructure bill does to close the digital divide, and we lay out six tangible benefits for American families.

How the Infrastructure Bill Closes the Digital Divide

The Infrastructure Investment and Jobs Act includes three central efforts to close the digital divide and connect everyone to broadband. Specifically:

$47.5 billion to bring broadband across the United States

The bulk ($42.5 billion) of broadband funding in the infrastructure bill will be used to establish the Broadband Equity, Access, and Deployment Program, which will provide states with funds for broadband deployment and digital equity. All states will get an initial $100 million in funding, with more money being awarded using a formula based off the number of unserved areas per state. Unserved areas will be designated using updated Federal Communications Commission (FCC) maps set to be published this year. The initial wave of money is, in part, meant to help states set up plans for how the rest of the funds will be used as well as how the investments will advance economic and social wellbeing.1

The funding allocated to states presents a generational opportunity to connect every home in the nation. Congress put down a roadmap for how to reach this goal by requiring funds be prioritized first toward unserved areas, then underserved areas, and then anchor institutions. If states carefully follow this guidance, the bill’s historic investments will put the goal of universal availability in reach.

This funding model was designed with flexibility in mind. For example, in Pennsylvania, state leadership has emphasized that they are focused on expanding access to rural parts of the state, where most of the people who lack access to high-speed internet live.2 For New Mexico, increasing access in tribal lands and addressing “last mile” infrastructure that will connect all individual homes and businesses is top of mind.3

On top of the billions designated to states themselves, the infrastructure bill sets aside an additional $4 billion in federal funding for broadband deployment specifically in rural and tribal areas. This will help close the urban-rural broadband availability gap and expand internet access to households across the country. Finally, $1 billion is set aside for bridging the gap between served and underserved areas closing the so called “middle mile.”

Investments in physically building out broadband infrastructure are only part of the solution—families also must be able to afford getting online. During the pandemic, 15% of home broadband users said they had trouble paying for their service even as broadband providers expanded their low-income discount programs and local leaders built public-private partnerships to affordably connect more people.4 No one should have to worry that paying their internet bill will prevent them from paying rent, buying food, or affording childcare. To address this issue, Congress created the Emergency Broadband Benefit (EBB), which provided around 9 million households with funds to help afford broadband by the time the program ended on December 31, 2021.5

The infrastructure bill makes that assistance permanent by creating the Affordability Connectivity Program (ACP), a benefit which will provide up to $30 per month for qualifying households and $75 per month for households on certain tribal lands. Any household that is at or below 200% of the federal poverty line is automatically eligible for the benefit. These benefits can be applied to any range of broadband plans, including the discounted plans many providers already offer low-income families.

Even though affordability was addressed through the EBB and ACP, many households still have not adopted broadband. This “adoption gap” is driven by a number of integrated factors, from literacy gaps to housing insecurity and language barriers. As a way to overcome these barriers, neighborhood-based “digital navigators” can support disadvantaged communities through outreach and education campaigns. The infrastructure bill included $2.8 billion for Digital Equity grant programs to fund this vitally important on-the-ground programming to help people in every community acquire the skills needed to thrive in the digital economy

What this Means for American Families

The infrastructure bill’s massive investment in broadband will have a significant impact on American families across the country. Specifically, it:

Key Fact: 40% of people expect to use telehealth services in the future.6

Telehealth provides people with quality care from the comfort of their home. It helps patients spend less money and time getting to their appointments, reduces the need for taking time off work, and grants access to providers that might be otherwise unavailable. The pandemic only further proved the vital importance of telehealth services. The number of health care professionals and patients using virtual appointments surged while people tried to maintain their distance.

Yet, for those without a broadband connection, that lack of connectivity remains a significant barrier to people’s ability to use telehealth services and access its benefits. A recent survey from the Bipartisan Policy Center found that for one-third of rural residents and one-fourth of urban residents, the lack of a high-speed internet connection and computer access were obstacles to getting virtual care.8 Further, connecting households to broadband is especially important in rural America, where years of hospital closures mean many people live far distances from the nearest healthcare facility.9 Addressing both broadband availability and affordability will help households access quality health care more easily and spend less of their valuable time doing so.

Even before the pandemic demanded an abrupt shift to digital learning, many children without broadband were already falling behind. Over the years, online lessons and assignments have become a key part of how children learn, with 70% of American teachers assigning online homework pre-pandemic.11 The “homework gap,” or the barriers students face when trying to complete homework without reliable internet, has been creating an uneven playing field for years. The Pew Research Center found that nearly 15% of households with school-age children did not have a high-speed internet connection at home.12 And without home internet, these students find it hard to keep up. Students with reliable internet at home are more likely to graduate and consistently score higher on tests.13

The homework gap also plays a significant role in deepening existing inequities for low-income, rural, and minority children.14 Over a third of children whose annual household income is below $30,000 don’t have internet at home.15 Rural children are twice as likely as urban children to lack sufficient internet for remote learning. And children of color make up 55% of unconnected students.16 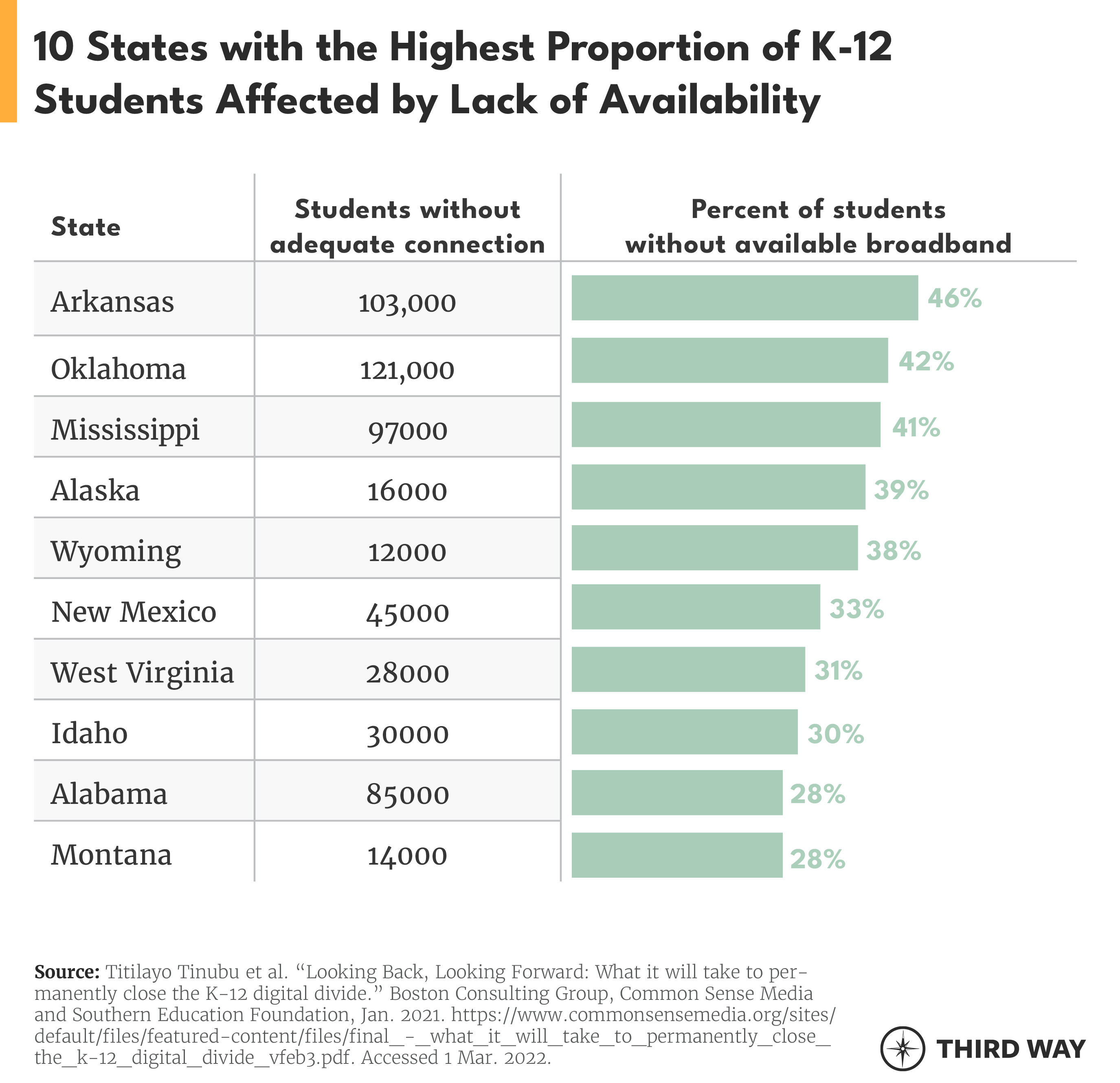 In efforts to prevent students from falling behind, many school districts used CARES Act funding to address immediate concerns of adoption and affordability. Their efforts closed an astounding 20% to 40% of the K-12 connectivity divide.17 Yet still 12 million K-12 students remain unconnected today.18 The infrastructure bill’s investment in broadband means that many of these short-term measures that have helped get millions online will be continued, while greater efforts are made to permanently close the gap.

Expanding access to broadband is critical to creating a more inclusive workforce and driving economic growth. Without broadband, workers face limited job options, and places with weak internet infrastructure struggle to attract workers and businesses. In fact, Deloitte found that a 10-point increase in broadband access in 2014 would have created more than 875,000 new jobs and added $186 billion in economic output by 2019.20

A recent example of this can be found by examining small businesses during the pandemic. It’s well documented that the pandemic forced a lot of shoppers online; a recent survey found almost half of Americans shop more online today than they did before the pandemic.21 And these virtual sales are what allowed many small businesses to stay afloat. Since the start of the pandemic, nearly 27% more small businesses are online than were before, and 87% of those opening a new business say they will be primarily online.22 Businesses benefit from being connected. In fact, digitally engaged small firms are three times more likely to create jobs and see four times the revenue growth than those businesses with low digital engagement.23

Key Fact: One out of every four households in rural America does not have broadband.24

While investments have been made in bringing broadband to rural America over the past decade, rural Americans still lag behind their urban counterparts when it comes to connectivity.25 For many people living in rural parts of this country, getting online is simply not an option. And for others, their service is too slow and unreliable to be counted on.26 Analysis of the US Census Bureau’s American Community Survey finds that 75% of households in rural counties have broadband, while Pew Research Center finds the number to be 72% and the Center for American Progress estimates 80% — all of which are well below households in non-rural counties.27

Connecting more rural families to broadband could have massive benefits. Researchers from the U.S. Chamber Technology Engagement Center found that improved digital connectivity among rural businesses could mean the creation of 360,000 more jobs and up to $47 billion added to the US economy.28 It could also help bring more people to rural areas, revitalizing communities left behind. A 2020 survey found that more than a third of respondents saw limited internet access as a barrier to moving to a rural area.29 This is at a time when nearly 28% of professional workers expect to be fully remote within five years.30 For communities, broadband is key to attract and retain the next generation of workers.

Key Fact: Median household income in well-connected counties is twice as much as counties with lower rates of connection.31 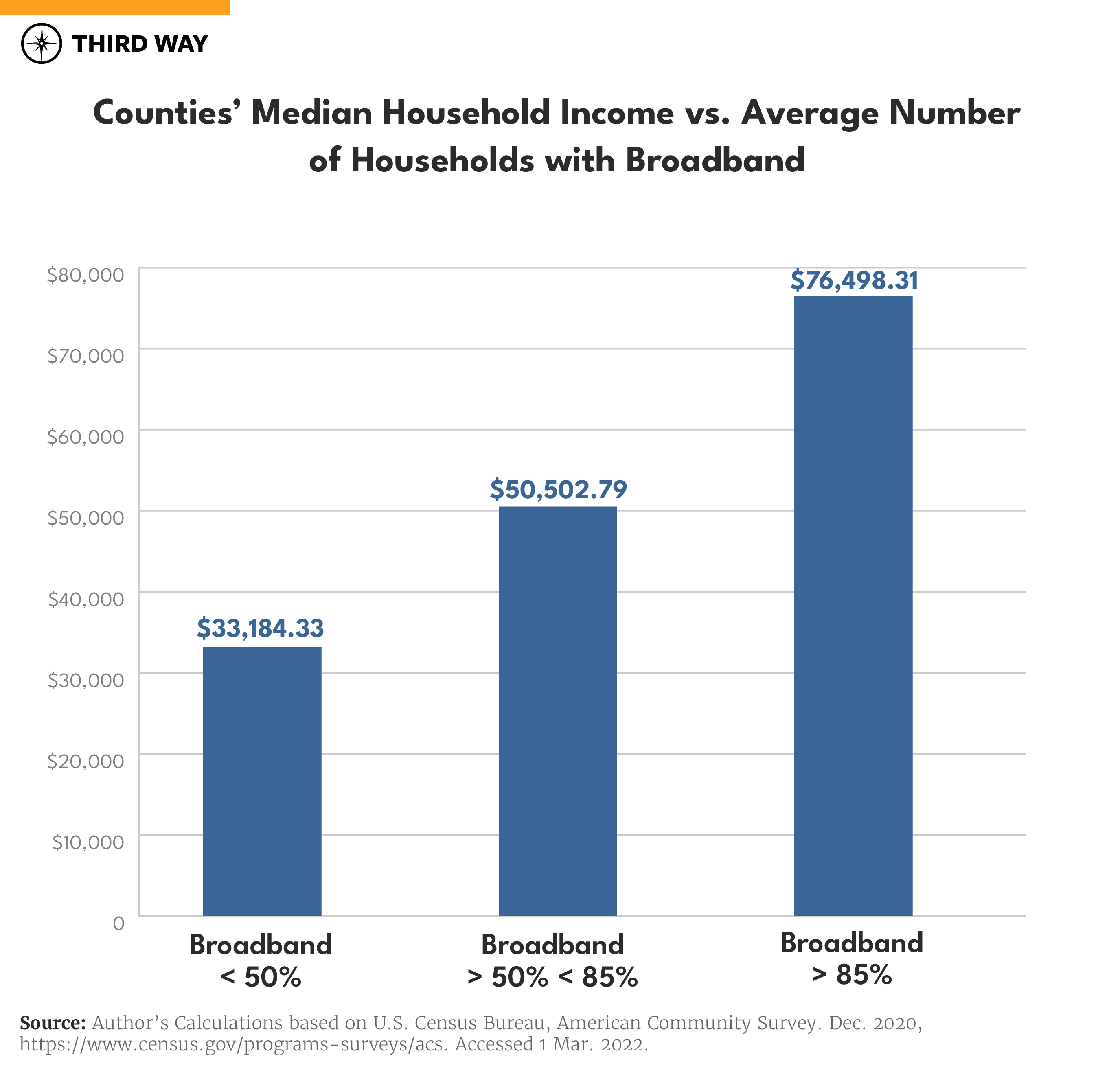 While this economic benefit won’t happen overnight, the broadband investments give under-connected communities throughout the country the opportunity to grow their economies. 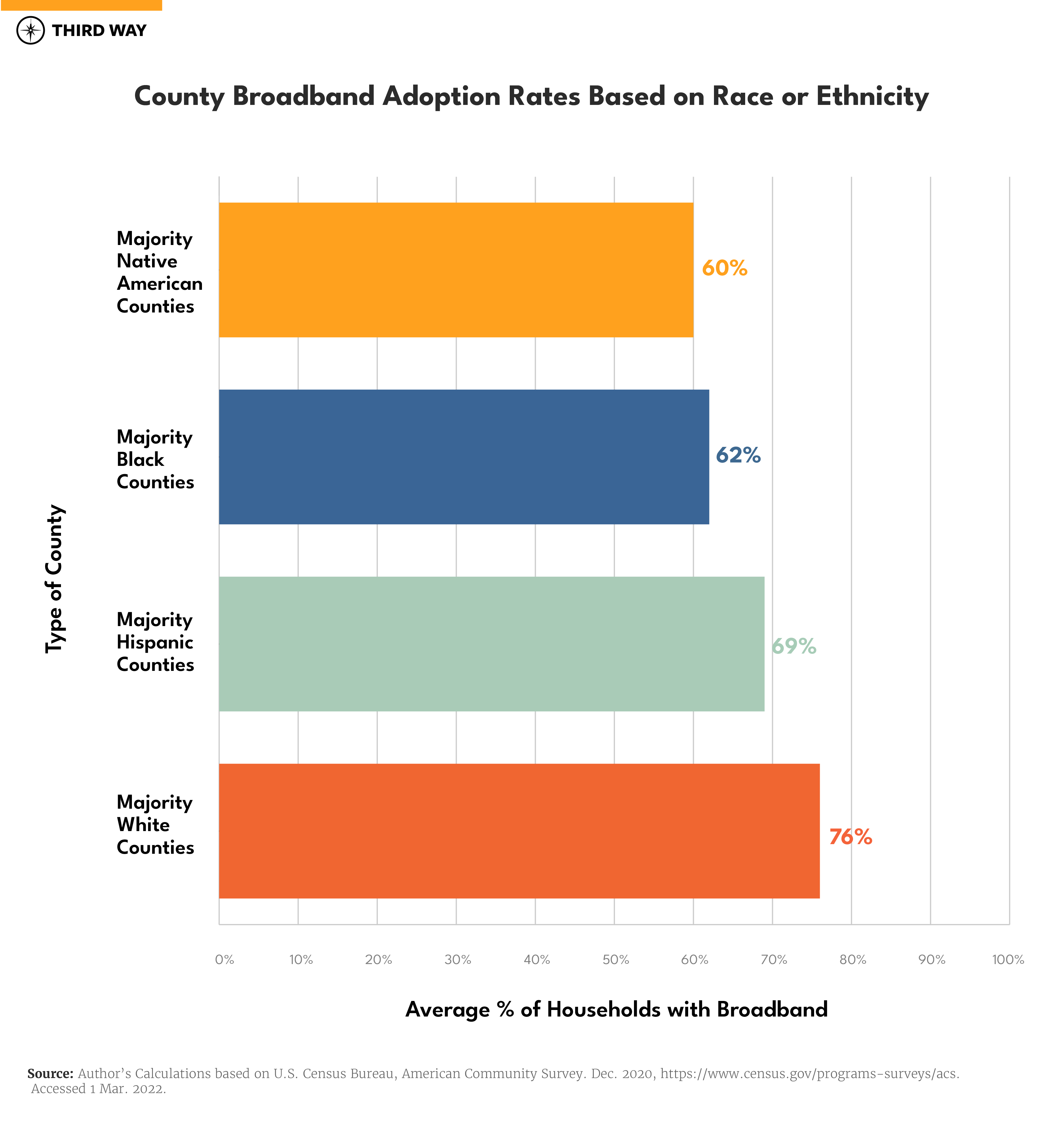 For people of color living in rural areas, inequities of race and geography compound one another. In the rural South specifically, Black residents are twice as likely as their white neighbors to lack home internet.36 For many Native Americans living on tribal lands, service is incredibly expensive and hard to come by. One study found that only 49% of residents of tribal lands have home internet, and that some service plans cost upwards of $100 a month.37 Leaving communities of color unconnected builds further barriers to economic opportunity and exacerbates disparities in access to critical services.

The infrastructure bill sets a bold agenda for bringing America’s roads, bridges, and electric grid into the 21stcentury. And let’s not forget the massive investment it makes in broadband. The billions it invests in closing the digital divide will drive economic growth, broaden access to health care and education, support entrepreneurship, and help connect workers to better jobs—all while breaking down the numerous barriers that have left low-income households, rural residents, and communities of color under-connected for far too long.