Step out of a doctor’s office after an annual physical and you’ll have a very good sense of how you’re doing. Myriad data points are collected and examined—from blood pressure and oxygen levels to joint function and mental acuity. But what if you want to know how a small business is doing, or better yet, how sectors of small businesses are faring? There’s no one simple test to give you an adequate look.

Because of that, we developed and released a Minority-Owned Small Business Snapshot last year to give policymakers an easy-to-use guide on the health of minority-owned employer businesses—those that have at least two employees. To do this, we synthesized publicly available data from the Federal Reserve’s biennial Small Business Credit Survey, US Census Bureau, and other various sources to develop 10 key findings. With the recent release of new data, we have updated the report with new facts and statistics on minority-owned businesses.

As detailed below, we found that:

#1: Minority-owned businesses are growing faster but are still vastly underrepresented compared to their population.

The US Census Bureau’s Annual Business Survey measures employer businesses in the United States. Last year, using 2019 data, we found that only 2% of businesses with employees were Black-owned, 6% were Hispanic-owned, 10% were Asian-owned, and 0.4% were American Indian- and Alaska Native-owned.1 While minorities make up 40% of the US population, they owned a much smaller proportion of employer businesses than their white counterparts. Except for Asian ownership, all other minority groups were underrepresented as business owners compared to their population in the United States.

Notably, looking at new 2020 data, there were increases in minority-owned businesses across races and ethnicities. Asian, Black, Hispanic, and American Indian- and Alaska Native-owned firms all increased by 5-15%. In comparison, white-owned businesses declined by 1%.2 While this growth is important, minority groups are still vastly underrepresented as business owners compared to their population in the United States, with the exception of Asian owners. 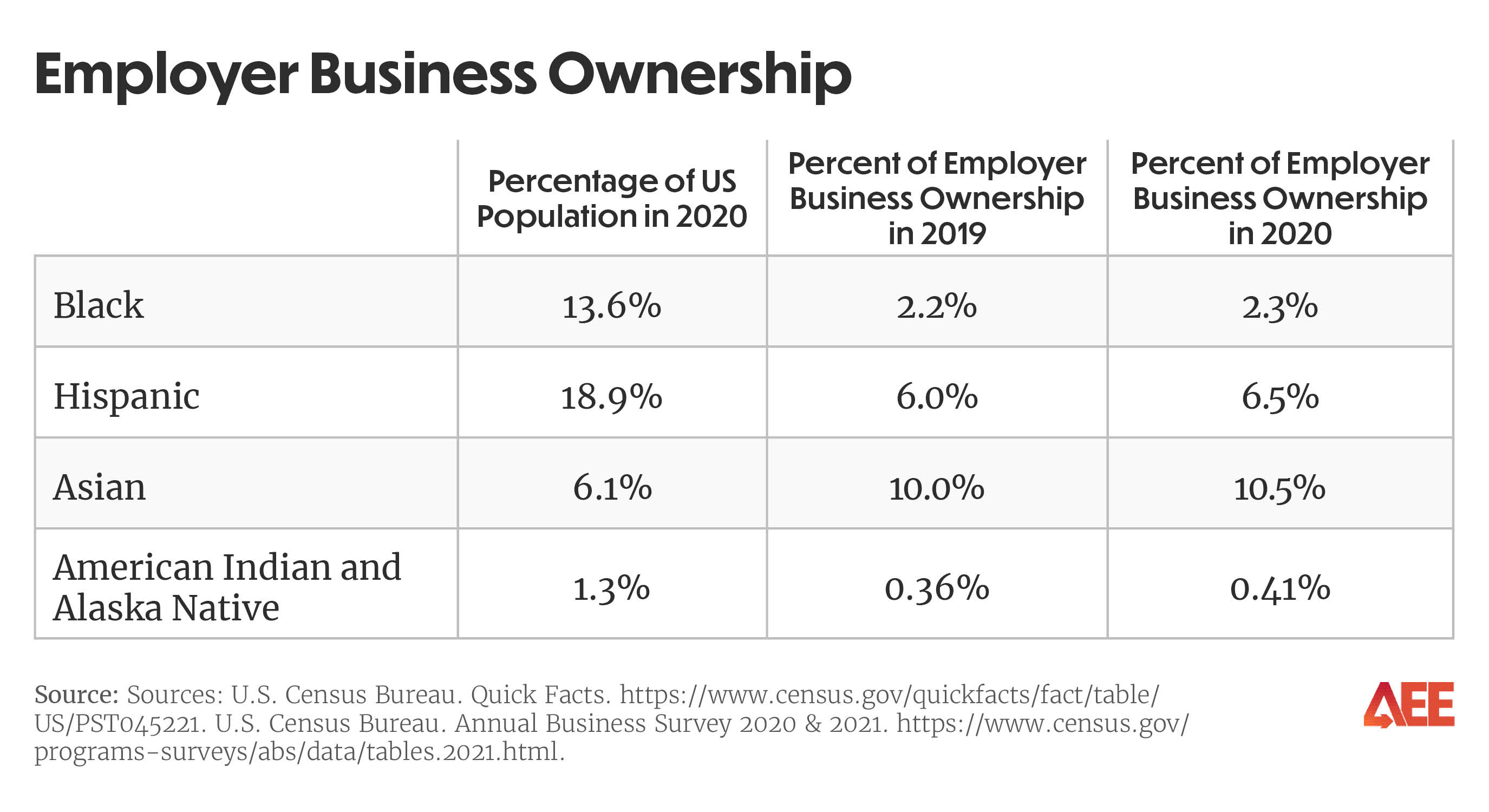 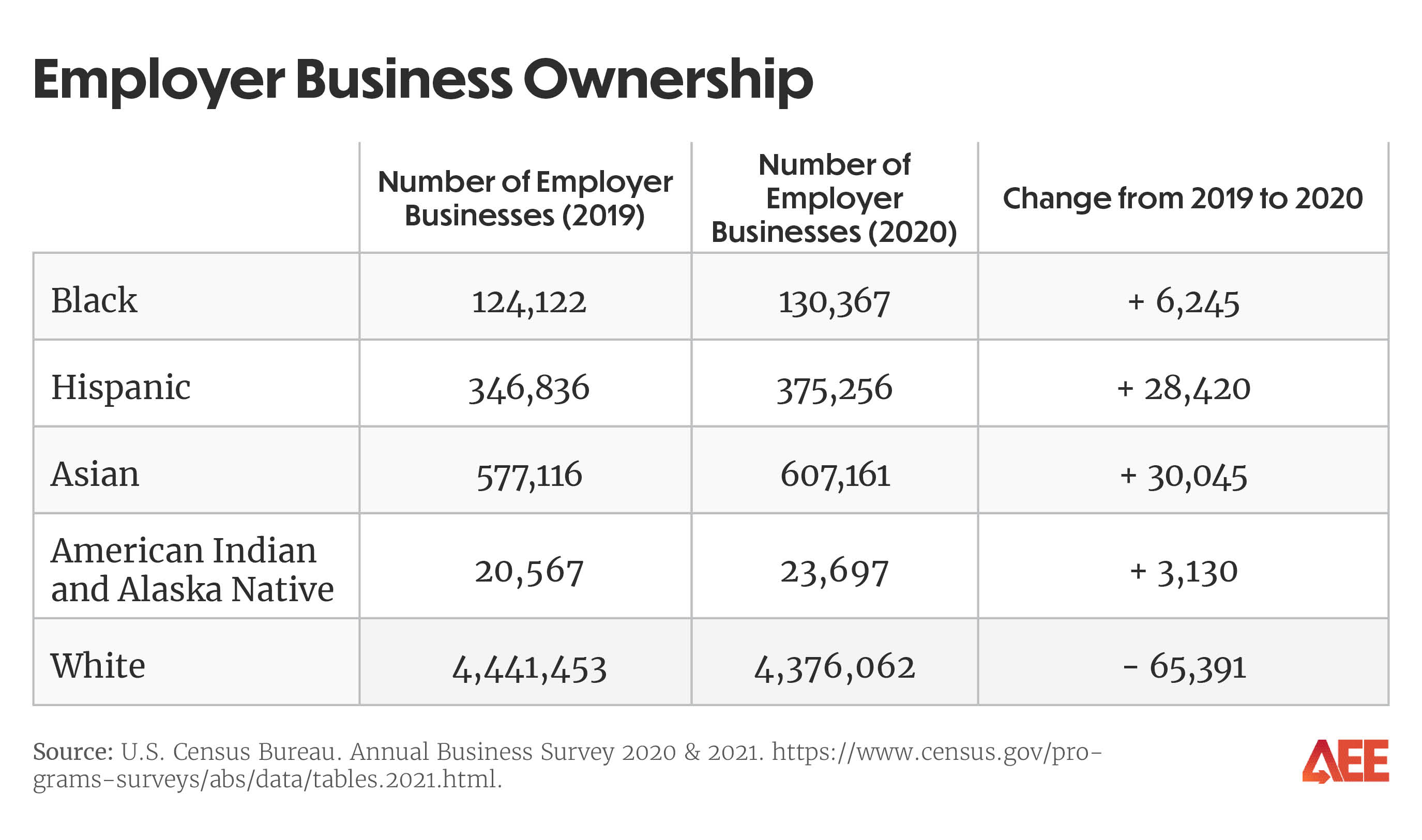 #2: The vast majority of minority-owned businesses employ fewer than 20 people.

Last year, using 2020 data, we found that over 9-in-10 minority-owned businesses employed fewer than 20 people.3 That fact still holds amid the new data.

The latest 2021 data shows some changes in the geographic concentration of minority-owned businesses based on the US Census Bureau’s nine different geographic divisions. First, a greater share of minority-owned businesses can now be found in the Pacific and East North Central regions.7 The Pacific region (AK, HI, WA, OR, and CA) saw four-point increases in Black-owned and Asian-owned firms and three-point increases in Hispanic-owned ones. The East North Central region (WI, IL, IN, MI, and OH) saw a five-point increase in Black-owned firms and a three-point increase in Asian-owned ones. 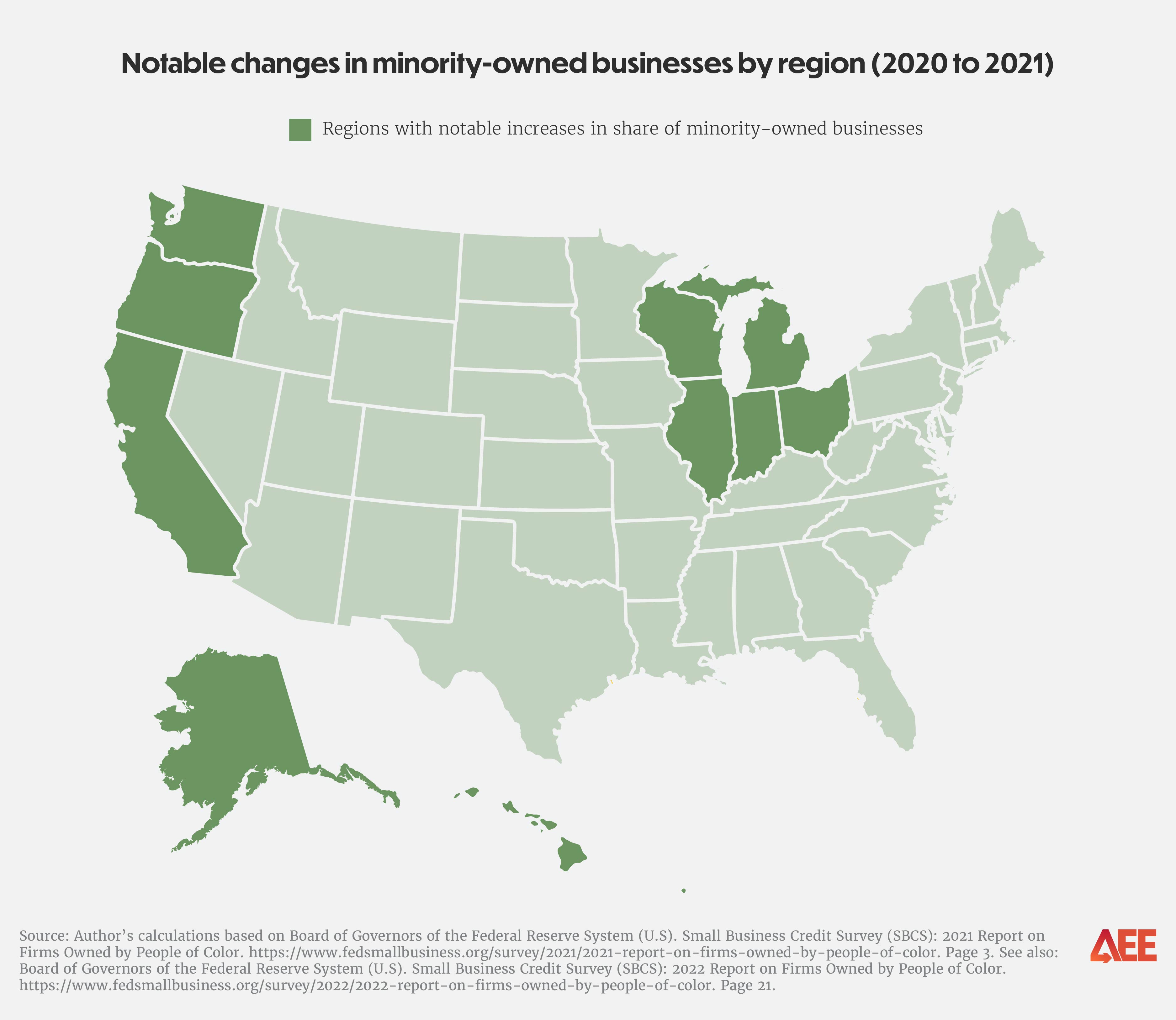 #4: There is somewhat less industry concentration among minority-owned firms than in previous years.

The Fed’s latest 2021 survey shows that there is somewhat less industry concentration among minority-owned firms than the prior year. Yes, 23% of Hispanic-owned firms are still in non-manufactured goods production and services, but that is down three points from the year before.10 And no more than 20% of Hispanic-, Black-, or Asian-owned businesses are in any other one industry sector.11 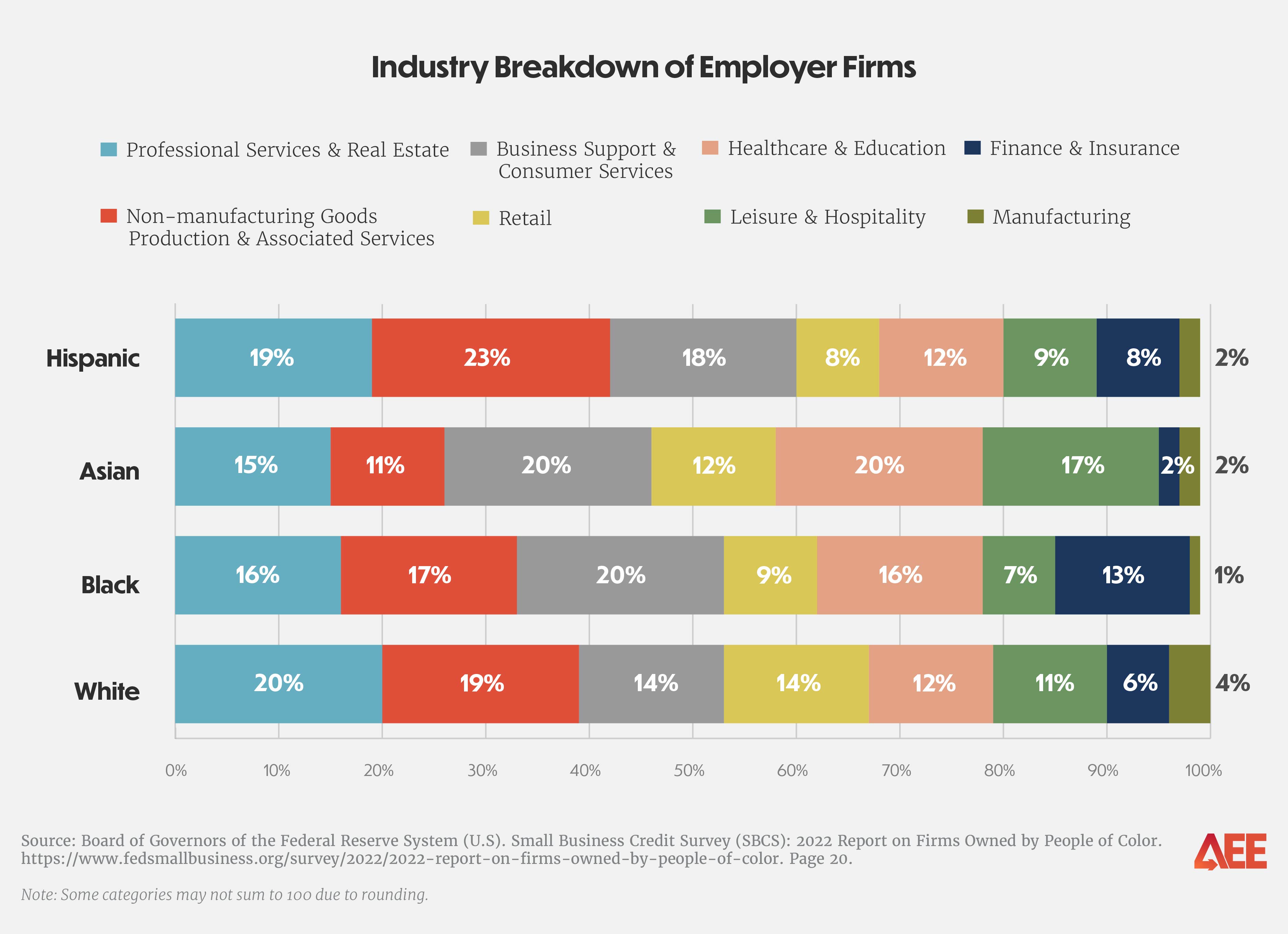 #5: Minority-owned businesses are now even more likely to have revenue under $100,000.

According to the Fed’s latest data, minority-owned firms in 2021 were even more likely to have revenue under $100,000 than their white counterparts. Sixty-three percent of Black-owned firms have less than $100,000—which is up 11 points from the year before.13 Almost half of Hispanic-owned firms (47%, up from 30%) and one-third of Asian-owned firms (30%, up from 18%) also saw revenue under $100,000.14 While a big contributor to this is likely the COVID-induced economic downturn, it clearly affected minority owners far more than white-owned businesses. 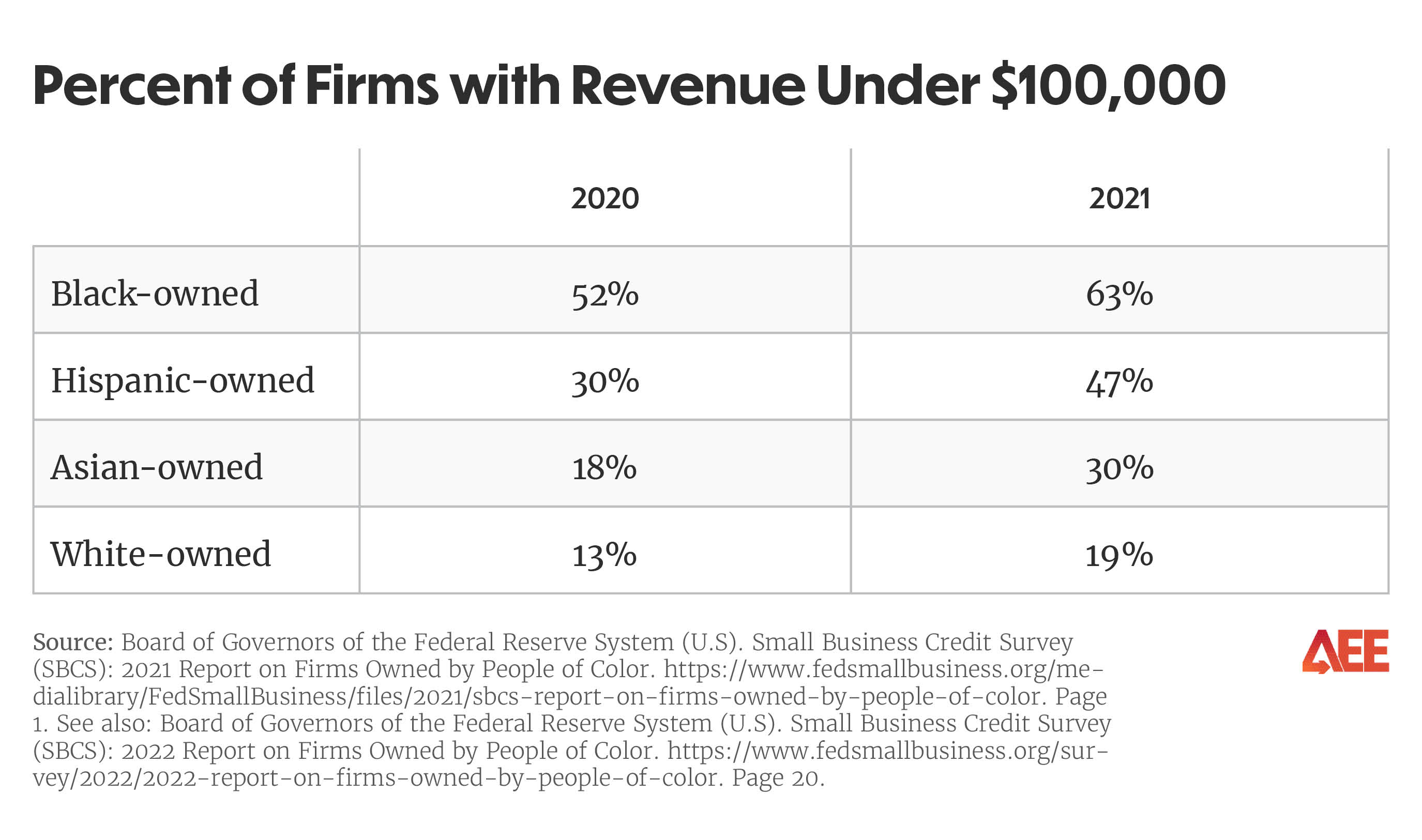 #6: Black and Hispanic-owned businesses are more likely to be labeled a high credit risk. 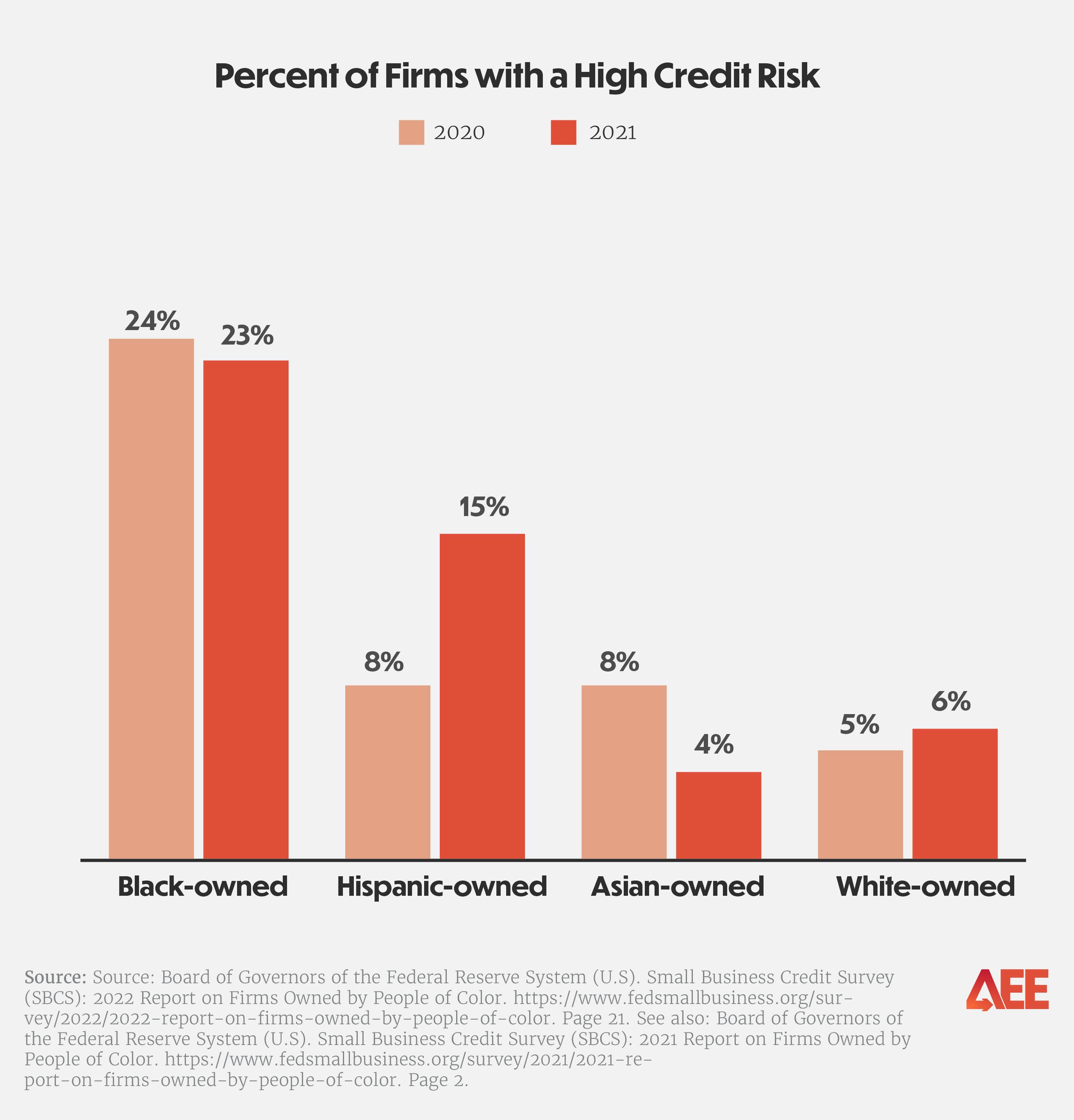 #7: Minority-owned businesses are all more likely to be shut out of financing.

There are numerous reasons why minority-owned firms struggle to access capital, including adequate financing. In a recent report, we explored five trends in the lending market that hurt diverse business owners including branch closures, fewer collateral options, stringent underwriting criteria, less banking relationships, and misaligned incentives.19 Notably, various lenders and the federal government have been taking action to broaden access to credit for borrowers that have often been turned away.20 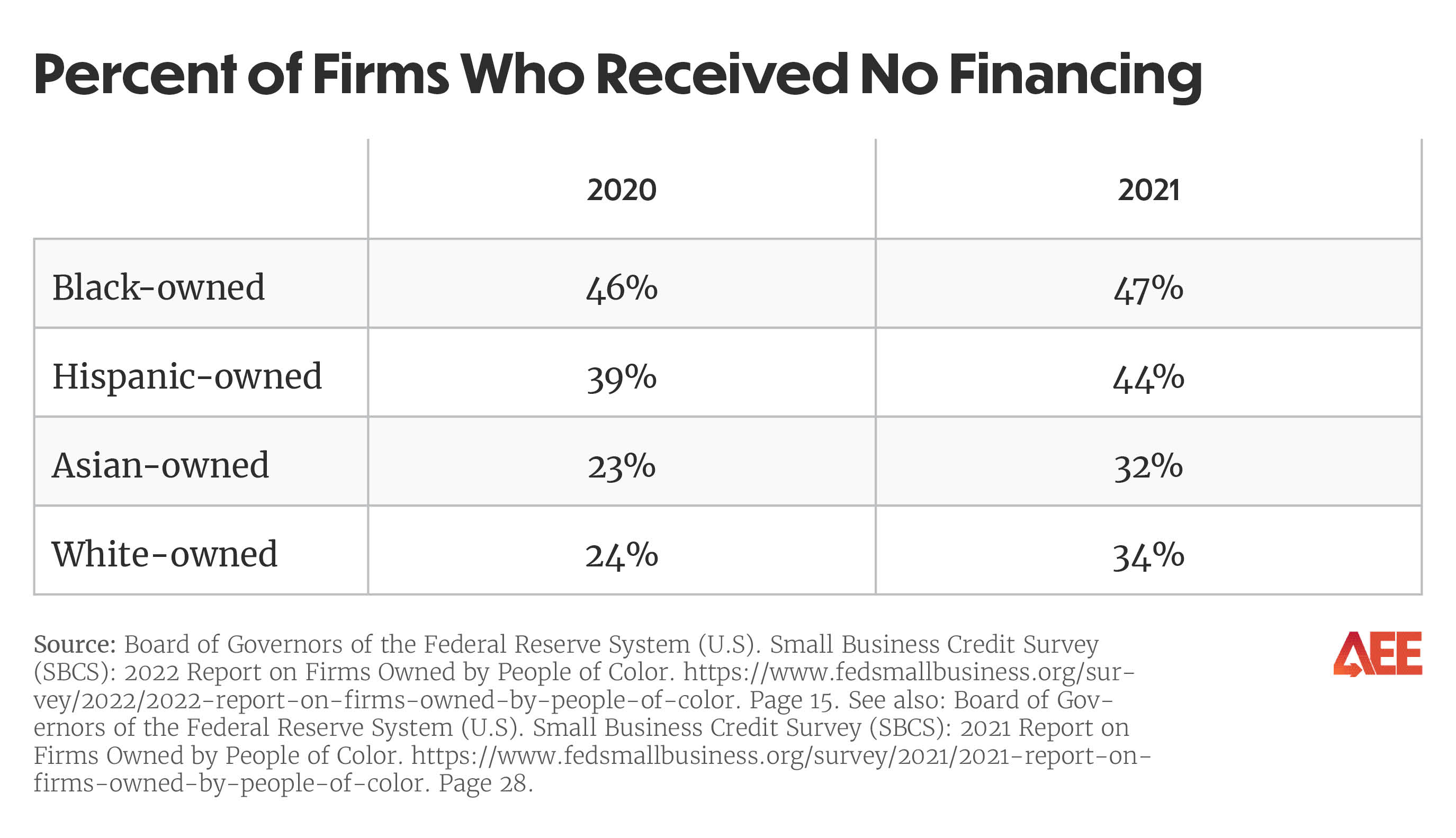 #8: Women-owned and minority-owned businesses were hit much harder during the pandemic.

In our report last year, we highlighted the toll that the pandemic was having on small businesses, especially those owned by people of color. The Fed’s most recent Small Business Credit Survey sheds even more light on those challenges. 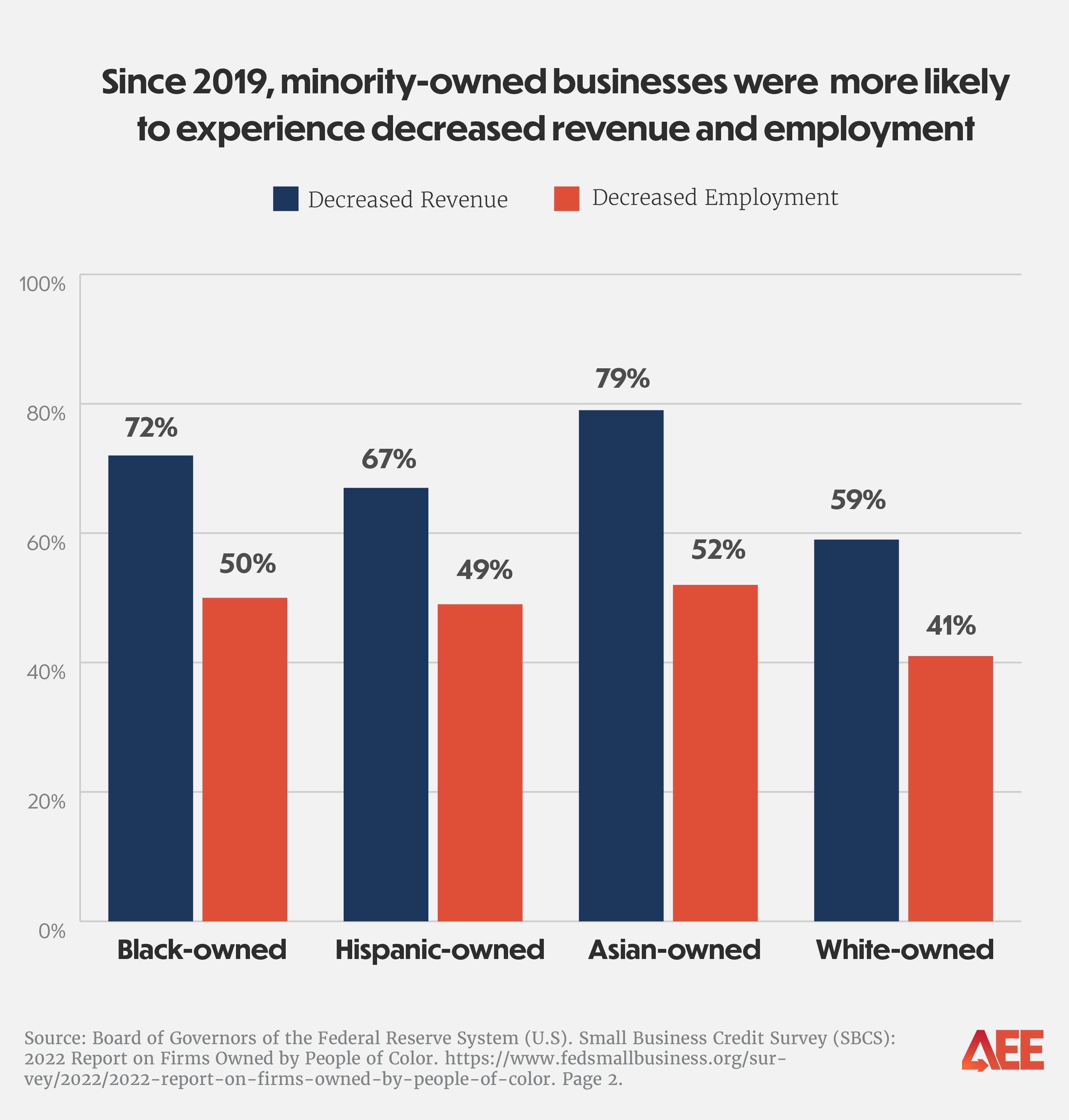 Despite the pandemic, we noted last year that the venture capital (VC) industry saw record-shattering growth by the end of 2020. Amid that surge, more funding flowed to companies founded by women and people of color. And yet, even amid this increase, Black and Hispanic female founders still got less than half a percentage point of all VC investment made in 2020, a dip below their 0.67% share of capital raised in 2019.23

Within the funding for female founders, Digital Undivided analyzed funding specifically for Latina and Black women-owned startups in health care, education, and financial services—which are among the most-funded industries for this community. In 2020, Latina and Black women founders received $624 million in these three sectors, which grew to $2.2 billion in 2021.26 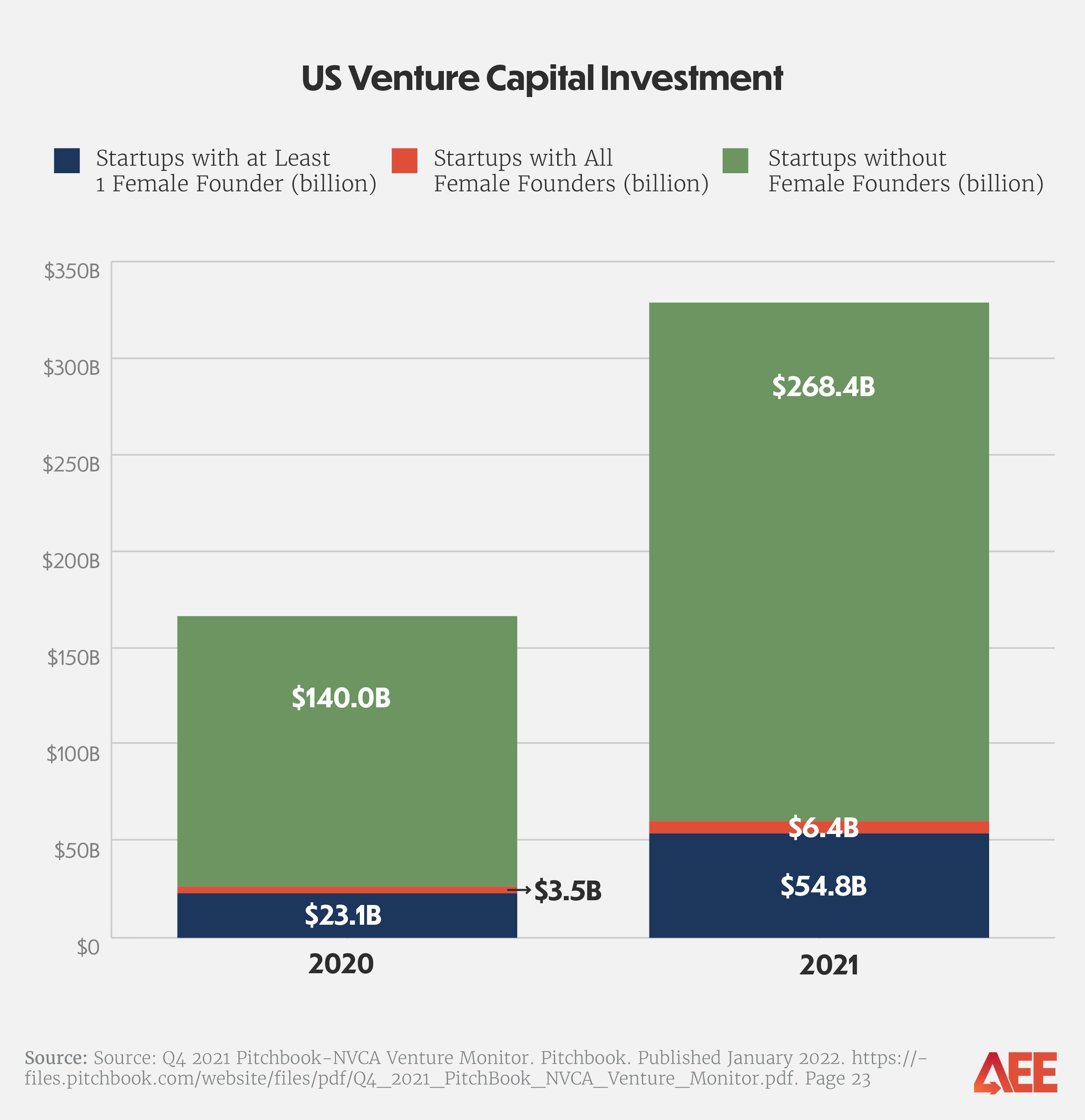 #10: Women and people of color continue to get a small slice of government procurement.

The federal government is the largest customer in the world—spending hundreds of billions on everything from lightbulbs to airport runways.27 But within this market, we found last year that that women and people of color overall got a small slice of this market. Specifically, women-owned small businesses only got 5% of federal contracts in FY2020 and minority-owned businesses only got 4-10%.28 Those trends still hold today amid new data. 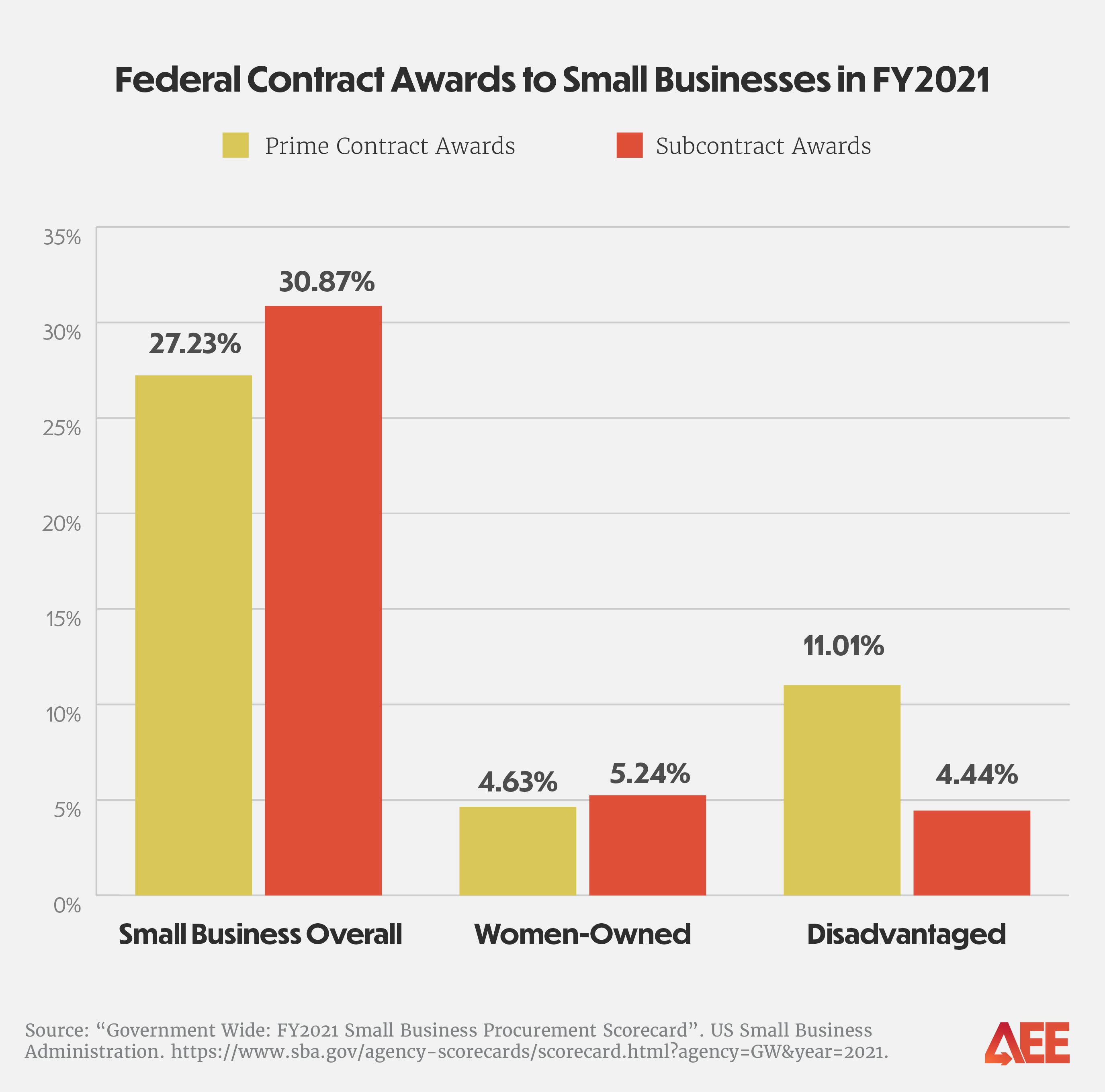