Savings and Retirement Weigh Heavy on the Minds of Voters

Often lost in the mesmerizing spectacle that is the 2016 presidential campaign, American households continue to worry about their immediate economic reality: their jobs, their wages, and paying for today’s expenses such as housing, health care, and childcare. In an environment focused on clear and present economic stressors, have longer-term concerns about saving for retirement taken a back seat?

We fielded a nationwide poll of 1,000 respondents from June 22 to 28, 2016. From this, we found that savings and retirement issues have far from subsided and continue to be a source of economic anxiety for the vast majority of voters. Specifically, voters are worried about their capacity to save for retirement, don’t necessarily agree with conventional Social Security expansion efforts, and see private savings as a critical piece to the retirement puzzle.

Here’s what our data found:

Voters are very concerned about their capacity to save for future expenses and retirement. When economic worries were probed, concerns about not having “enough money for a comfortable retirement” (63% expressing some level of concern) beat out all other concerns including having to pay too much in taxes (62%), losing jobs due to trade (61%), and having too much personal debt (43%). 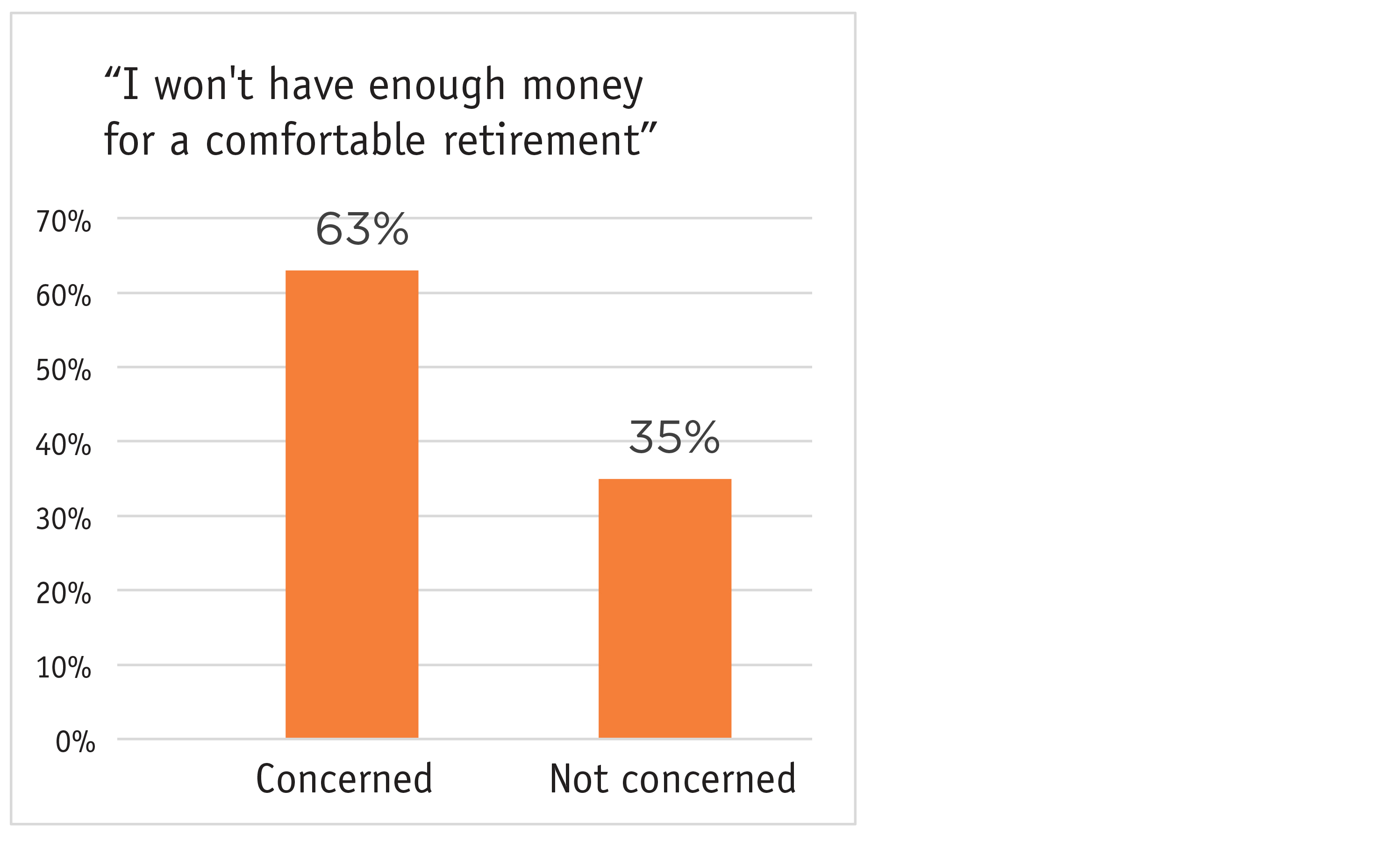 This concern was prevalent among numerous economic subgroups:

This retirement anxiety was more acutely experienced among those without a college degree and under the retirement age of 65. Within this subset, nearly half (47%) said that this worried them a “great deal.” Also, 43% of younger, unmarried women shared these retirement concerns with the same high intensity.

Even apart from retirement, the majority of voters (53%) worry about putting any money away for unexpected expenses in the future (like a car repair or medical need). An overwhelmingly majority (69%) of younger Americans without a college degree worry about this basic ability to save.

Just expanding Social Security is not a panacea. 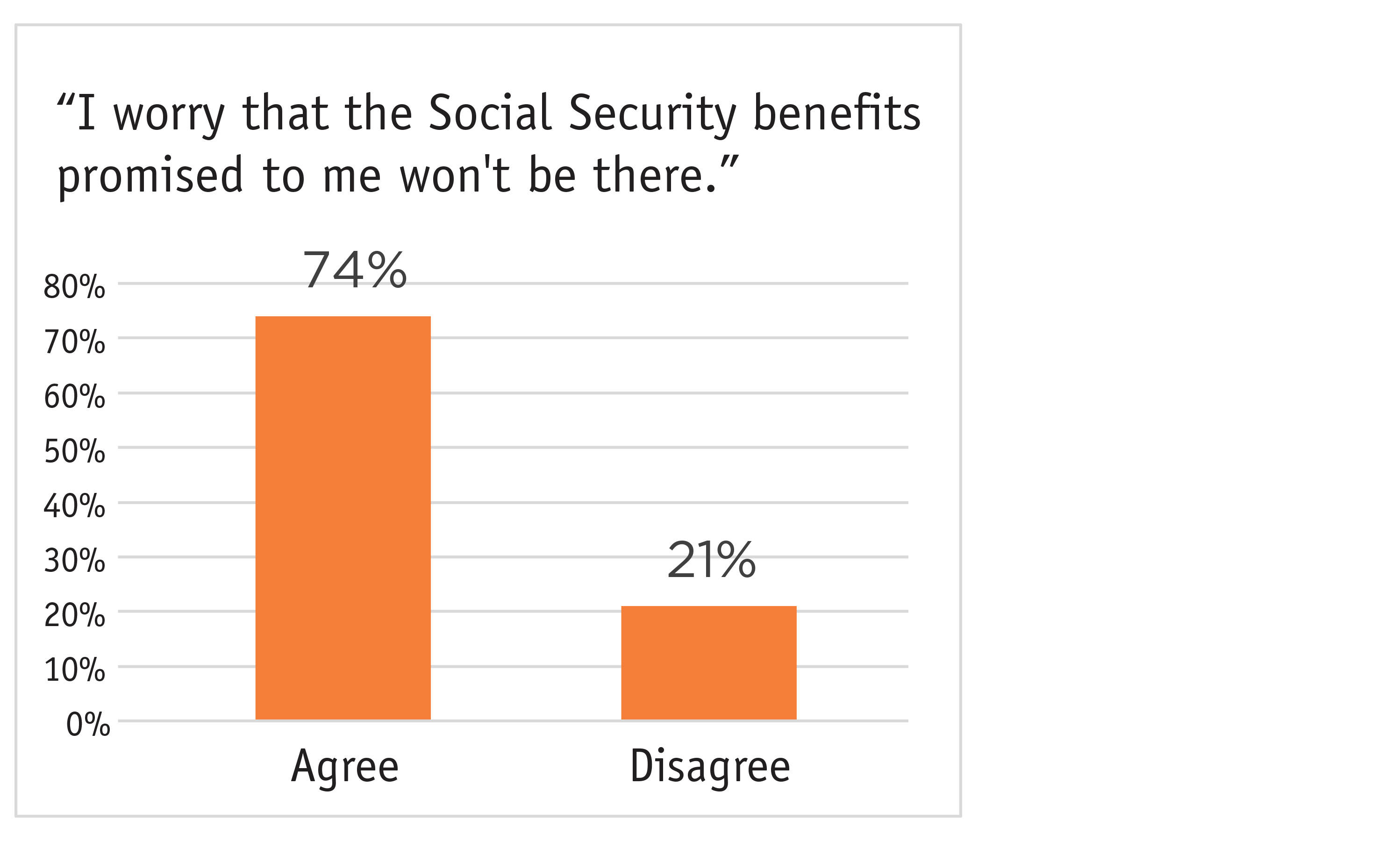 Nearly three-quarters (74%) of voters worry that the Social Security benefits promised to them will not be there when they enter retirement. Among younger Americans (under 50), this concern is held by 81% of respondents.

Because of that, we asked voters about proposals to expand Social Security for all, which did not land nearly as well as some might expect.

When asked if Social Security should be expanded for poor and vulnerable seniors or if benefits should be expanded for all regardless of income, voters favor targeted reforms that would benefit the more vulnerable by a 42% to 39% margin, with 15% saying benefits should not be increased at all. This margin is even more pronounced among middle income ($30K to 100K households) voters (47% favoring targeted reforms to 38% favoring expansion for all, 13% for no benefit increase at all). Further, a clear majority of both self-described liberals (55% to 36%) and Democrats (52% to 42%) favor benefits to more vulnerable seniors over an across-the-board benefit hike.

But support for Social Security expansion for rich and poor alike erodes significantly when voters hear critiques of the plans. After learning that Social Security expansion for all would modestly raise the average worker’s taxes, voters favor targeted reforms by a 47% to 30% margin. When voters hear the “expansion for all” approach would result in more benefits going to wealthier retirees, they prefer the more targeted approach by a 50% to 34% margin. After hearing both messages, voters support a more targeted benefit increase for vulnerable seniors by a 2-to-1 margin (51% to 25%).

Private savings, in addition to Social Security, is viewed as critical.

While voters are worried about their ability to save, there is a clear recognition that the key to a realistic retirement future is building private savings outside of Social Security. By an 87% to 9% margin, voters said that they are looking for personal savings to supplement Social Security benefits, rather than viewing Social Security as sufficient for retirement. 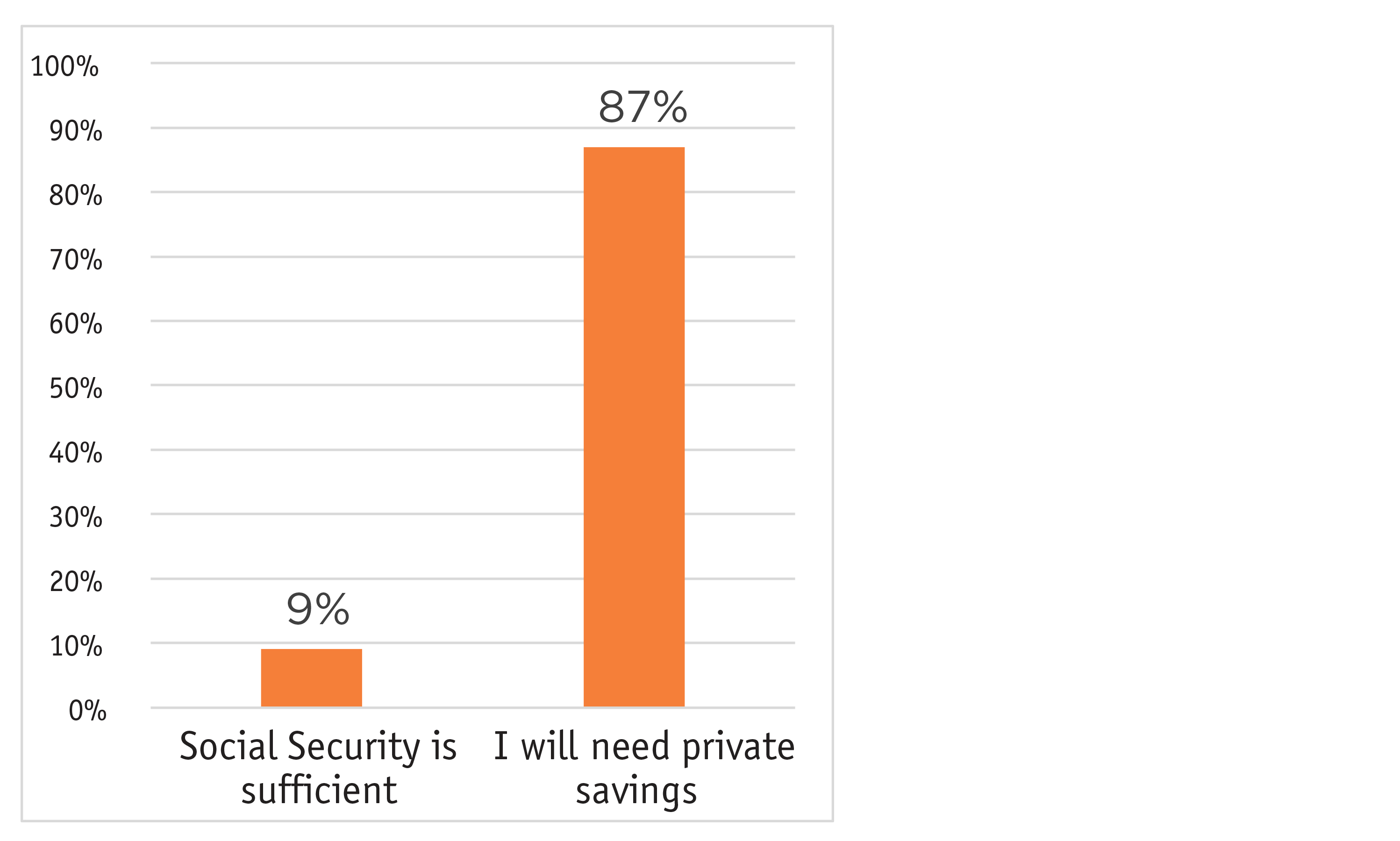 When voters are presented with a proposal that would require employer contributions to a private retirement savings account (separate from Social Security), it is supported by a 67% to 28% margin. In fact, this idea is supported 80% to 15% by Democrats, 64% to 30% by Independents, and even by a majority of Republicans, 55% to 43%.

Voter concern over savings and retirement is strongly held but undervalued. Amid, and perhaps as an extension of, near-term economic worries, there is widespread concern among voters about the capacity to save and reach a comfortable retirement. This is paired with little faith that Social Security will enable Americans to truly achieve retirement. At the same time, they are skeptical of solutions that simply expand Social Security for rich and poor alike, and they know that savings outside of Social Security is key to making retirement a reality in today’s economy.