The United States is facing a rising cybercrime wave, affecting every sector of the US economy and threatening America’s national security. Despite this growing threat, there is a serious gap in the US government’s response—our research has found that less than 1% of malicious cyber incidents ever see an arrest of the criminal. This cyber enforcement gap has allowed cybercriminals to operate with impunity and must be addressed in congressional responses to the issue.

Many US government entities have the responsibility of reducing the cyber enforcement gap and Congress must assess whether they have the necessary resources to shrink the gap. To help in these efforts during the Fiscal Year (FY) 2020 budget cycle, Third Way has prepared a Reader’s Guide for Members of Congress and their staff to help them understand the key government entities involved in cyber enforcement and their current funding levels.

The United States is facing a rising cybercrime wave, yet, a tremendous enforcement gap currently exists in government efforts to identify, stop, and punish the human cyber attackers.

The United States and countries around the globe are currently facing a stunning gap in their efforts to bring to justice cybercriminals and other malicious cyber actors. This national security and economic threat continues to rise, while offensive efforts to counter it have fallen short.

A rising and often unseen cybercrime wave is mushrooming in America. There are approximately 300,000 reported malicious cyber incidents reported to the Federal Bureau of Investigation per year hitting every sector of the US economy— which is likely a vast undercount since many victims do not report break-ins to begin with.1 Malicious cyber activity perpetrated by nation-states, criminal networks, terrorist groups, lone actors, and others has cost the US economy anywhere from $57 billion to $109 billion annually and these costs are increasing. Cybercrime tools have been used to attack vital US national security institutions and steal critical information. A single one of these incidents can hit countless victims in many different countries no matter the location of the perpetrators.2

Third Way has launched a new Cyber Enforcement Initiative aimed at identifying policy solutions to boost the governments’ ability to identify, stop, and punish malicious cyber actors.3 Through this Initiative, Third Way has found that, on average, only 3 out of 1,000 of the malicious cyber incidents that occur in the United States annually see an arrest, which is an enforcement rate of less than 1%.4 This cyber enforcement gap is allowing criminals to engage in malicious behavior without any fear of being caught or punished.

Government is the only institution with the authority to pursue the human attacker and bring them to justice. However, in the United States, a heavy focus of cyber policy discussions has been building better cyber defenses against intrusion. To close the cyber enforcement gap, Third Way has argued we must rebalance US cyber policy from a predominant emphasis on network protection to a policy that also uses law enforcement to go after the human cyber attackers and diplomacy to boost international cooperation and capacity in order to do so.

In order to rebalance America’s cyber approach and prioritize law enforcement and diplomacy, the country needs a comprehensive strategy for strengthening the US government’s abilities to identify, stop, and punish cybercriminals and other malicious cyber actors. To help develop such a strategy, Congress must start by first understanding the key government entities involved in cyber enforcement and assess whether their current funding levels meet the challenges they are faced with in reducing the cyber enforcement gap.

With the expanding list of entities involved in cyber enforcement, issues such as mission duplication, misallocation of resources, and unclear lines of authority have arisen. While each of these agencies has a vital role in cyber enforcement, there are also some similar or overlapping responsibilities between them. At the federal level in particular, this can lead to inefficiencies, redundancies, and difficulties in ensuring congressional oversight efforts are tied to an overarching strategic cyber enforcement approach across agencies.5

To help make sense of all of the different government entities involved in cyber enforcement, Third Way has prepared a Reader’s Guide for Members of Congress and their staff. This document is meant to give a snapshot of the key entities involved in making progress in reducing the cyber enforcement gap. This list is not exhaustive, and some government agencies were not included if they do not have a predominant focus on cyber enforcement.6 The list of Departments, Agencies, Offices, Sections, and Divisions were selected because of their key role in either cybercrime prosecutions, investigations, international cooperation, or international capacity building.

The following agencies play a critical role in US cyber enforcement efforts: 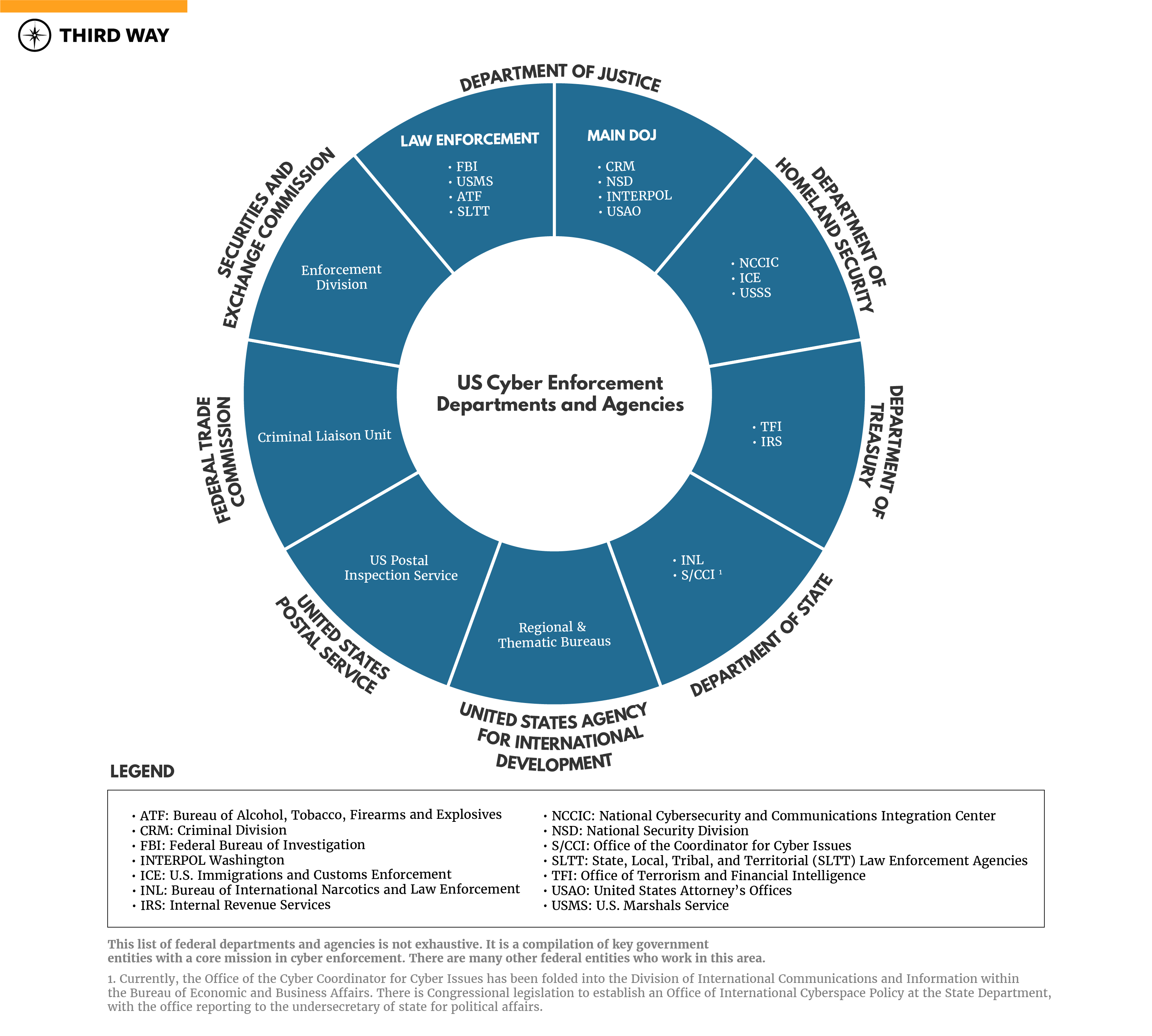 Office of the General Counsel (OGC)

iGuardian is a secure portal allowing FBI partners within critical telecommunications, defense, banking and finance, and energy infrastructure sectors to report cyber intrusion incidents to the FBI in real time.22

Office of Terrorism and Financial Intelligence

Office of the Coordinator for Cyber Issues (S/CCI)41

In order to make progress in reducing the cyber enforcement gap, Congress must evaluate whether the key entities involved in identifying, stopping, and bringing to justice malicious cyber actors have the required funding they need.

In order to assist Members of Congress and their staff in doing this evaluation during the FY 2020 budget process,48 Third Way has compiled the budget history of key entities across the US government engaged in cyber enforcement (based on publicly available data). Only those entities whose budget levels are specifically listed in the Executive Branch’s budget request and corresponding materials are included. As such, we were unable to ascertain funding levels for all of the specialized units and sections involved in cyber enforcement if their budgets are not made publicly available.

Overall, funding for key cyber enforcement entities has remained consistent with a few increases from FY 2017-2019. However, in previous years the Trump Administration has requested to eliminate funding for the National Computer Forensic Institute (NCFI). Congress should work to ensure it has sufficient funding to fulfill its mandate. Even at its height, the NCFI was only running at about one-third capacity and would require close to $35 million to be at full capacity49— far from the $4 million currently budgeted. Further, dedicated funding for the State Department’s Office of the Coordinator for Cyber Issues has been eliminated from the budget request, which should be re-established along with the authorization for the Office led by an Ambassador. Although overall funding for cyber enforcement has largely been consistent, what is clear is that the current allocation of funding is not enough to reduce the cyber enforcement gap—particularly for entities like the FBI, USSS, and the State Department’s INL Bureau. Congress should evaluate whether strategic boosts in funding for certain key US entities involved in cyber enforcement are necessary in order to provide them with the resources needed to stop, identify, and punish malicious cyber actors and put a large dent in the cyber enforcement gap.