If Democrats manage to hold on to the House and Senate, it will be in spite of the party brand, not because of it, according to a pre-election national poll. Despite a roster of GOP candidates who are extreme by any standard, voters see Democrats as just as extreme, as well as far less concerned about the issues that most worry them. A potential saving grace for Democrats is the strength of candidates who have established themselves as more moderate than the party brand as a whole, which when paired with the weakness of their Republican opponents may pull some across the finish line. But if this brand problem persists, Democrats will face an uphill climb in 2024 and beyond.

Working with Impact Research and Welcome PAC, Third Way conducted a survey of 800 likely voters nationwide, with an oversample of 200 swing voters, from October 21st-28th to understand how voters are perceiving the parties as they head to the ballot box. The results indicate that Democrats are underwater on issues voters name as their highest priorities, including the economy, immigration, and crime, they are perceived as distant from the electorate ideologically, and voters question whether the party shares essential values like patriotism and the importance of hard work.

While Democrats maintain a lead on handling certain issues like abortion and climate change, voters also rank these issues as lower priorities. While it might be comforting to blame any midterm losses solely on historical trends, this data makes crystal clear that there is a much deeper problem at play. Ultimately, there is no way for Democrats to build and maintain winning coalitions without repairing their damaged brand, even in an era where Republican candidates are increasingly extreme and women’s fundamental rights are on the ballot.

Out of Touch on Priorities

The national Democratic Party’s woes likely stem in part from a perception among voters that Democrats are not focused on the issues they care about most. Voters do trust Democrats more than Republicans to handle certain topics, but unfortunately for Democrats, the issues where they stand on stronger ground are also those which voters consistently say are less important to them—at least at the federal level. 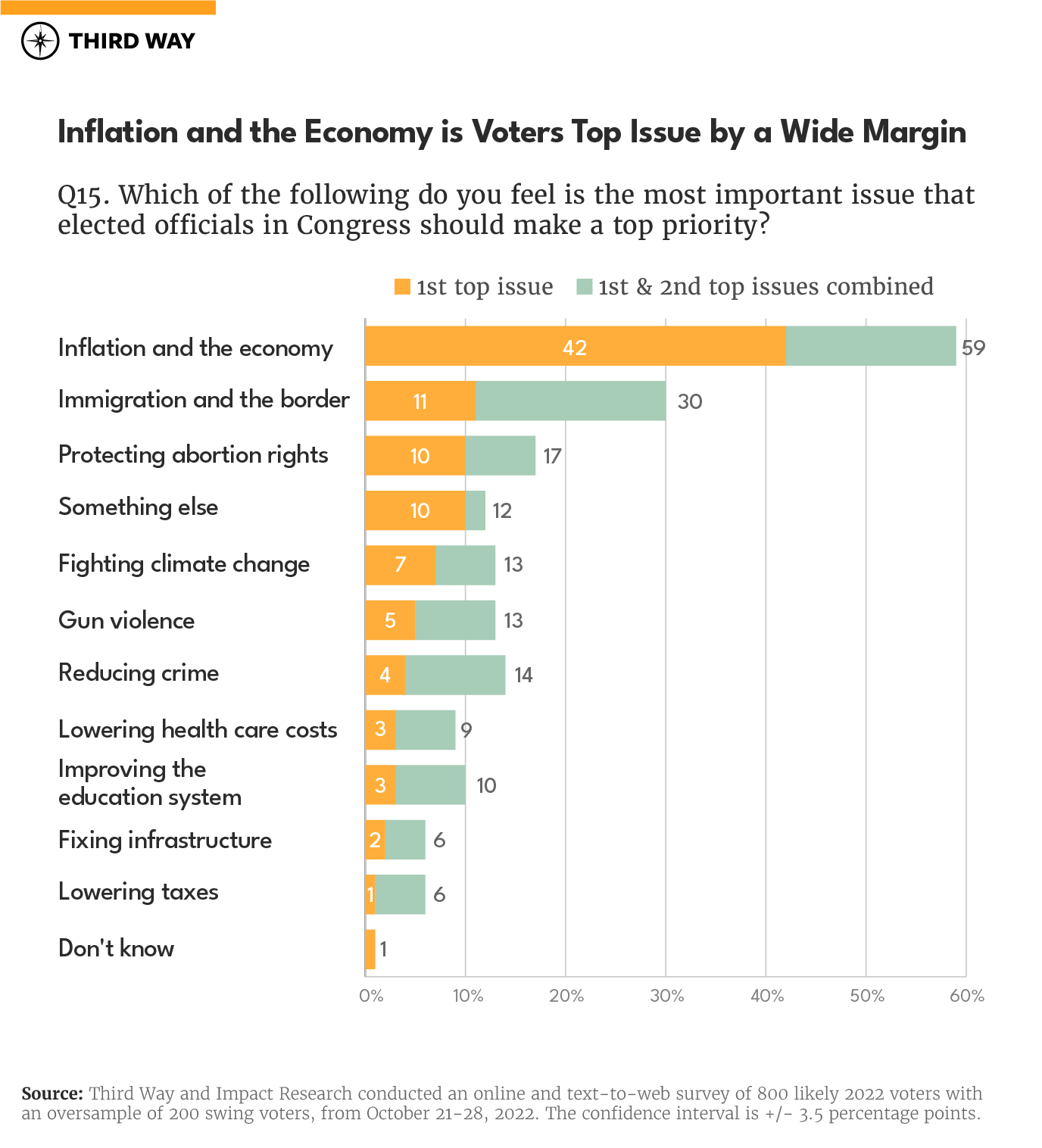 When asked which party would do a better job handling each issue, Republicans hold a decisive advantage (54%-36%) on inflation and the economy. A majority of voters (53%) also worry that continued Democratic control of Congress will make inflation worse, while less than a quarter (23%) say the same about Republican control. And 56% say Democrats are not focused enough on the economy, while only 36% say the same about their opponents.

Republicans also lead Democrats by 20 points or more on handling immigration (57%-33%) and reducing crime (54%-34%). By contrast, voters say they trust Democrats over Republicans by wide margins on protecting abortion rights (59%-24%), fighting climate change (54%-27%), and funding the education system (52%-33%). Unfortunately for Democrats, those issues are simply lower salience in driving votes—which is likely why only 41% of voters say the party prioritizes the issues they care about (with only 13% saying so strongly).

Worse, even in the areas where Democrats are trusted more, it is not clear that voters are sold on Democrats’ approach or ability to get things done. Jarringly, in a split-test between which party will fund the education system and which will improve the education system, Democrats lead by 19 points on funding education, but trail by one point on actually improving it. And when asked about a specific education policy like President Biden’s student loan cancellation proposal, voters oppose it by 13 points (22 points among swing voters). 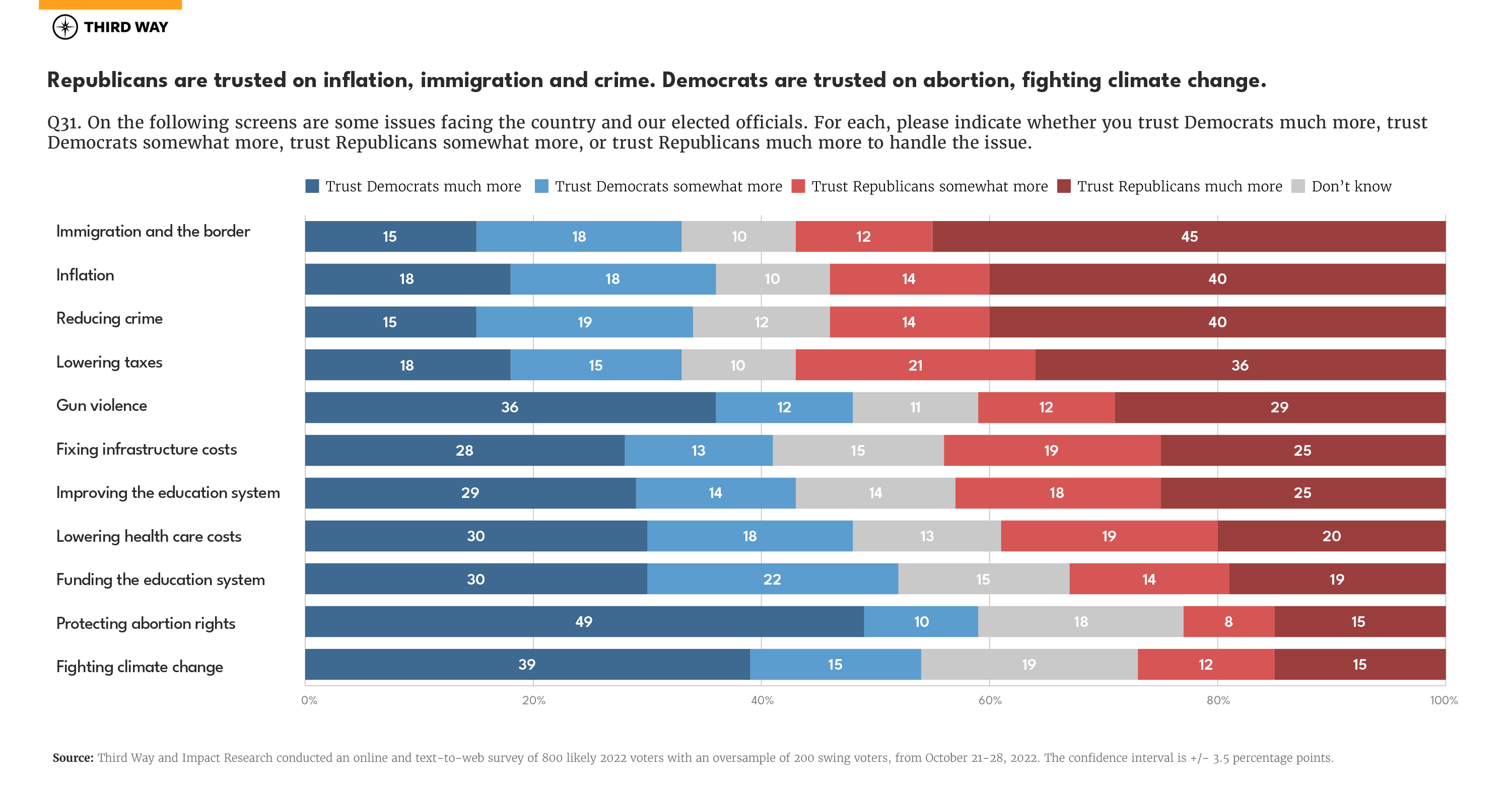 Given voters’ lack of trust of Democrats on their top issues, it is no surprise that they want these midterms to yield a check on Democrats’ power in Washington.

Out of Touch Ideologically

Democrats are benefitting from a perception among voters that Republicans are extreme, but they cannot fully reap the gains of this view, as voters think Democrats are extreme as well. Our survey asked respondents to place themselves on a 10-point ideological scale, with 0 being the most liberal, 10 being the most conservative, and 5 being the middle, and then to plot the Democratic and Republican parties on the same scale. Despite the Republican Party’s far-right candidates and anti-democratic behavior, Democrats and Republicans are rated similarly far from the center, and Democrats are seen as further from where voters place themselves ideologically.

Given voters’ moderate self-rankings compared to both parties, it is unsurprising that when asked which party nominated the most moderate candidates for Congress this year, a large plurality of swing voters (46%) said “neither party.” In an era when Republicans are leapfrogging each other to drive their party to ever-more dangerous extremes, it is imperative that Democrats be seen as the mainstream alternative—not simply a mirror image of polarization. 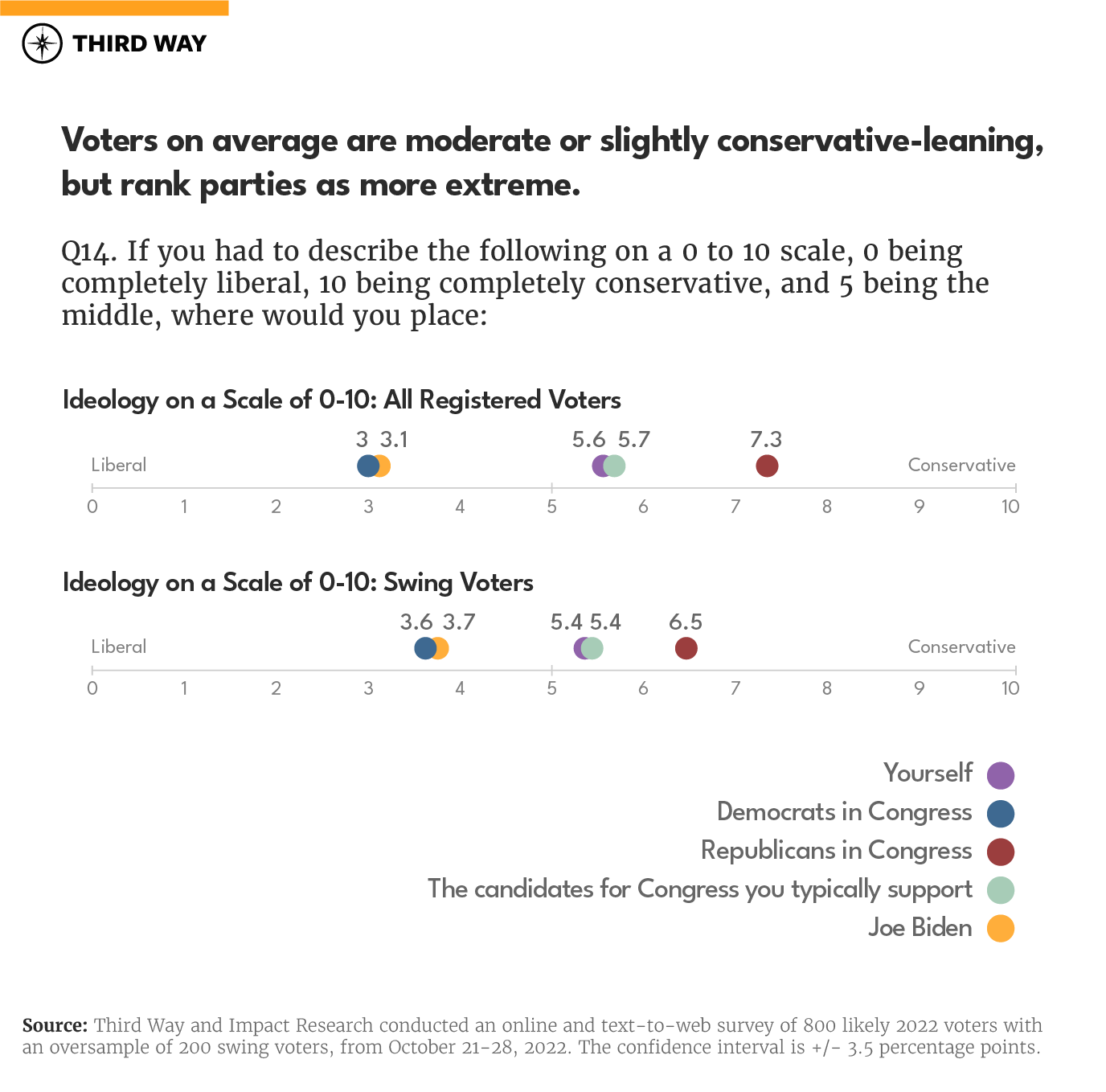 Out of Touch on Values

In addition to being seen as further away from themselves ideologically, voters also worry that Democrats may not share some of their core American values. Only 43% of voters say Democrats value hard work, compared to 58% for Republicans. Less than half (46%) describe Democrats as patriotic while 56% say the same about Republicans. A paltry 43% say Democrats share their values overall and a similar proportion (44%) think the party looks out for the middle class—a core element of a winning Democratic brand. Compounding these problems, a majority of voters (55%) describe Democrats as preachy and 53% say the party is “too woke.” And while 54% call Republicans “too extreme,” a strikingly similar 55% of voters say the same about Democrats—with 59% saying the party has gotten more extreme in recent years. A super majority (61%) of voters say Democrats are too beholden to special interests. 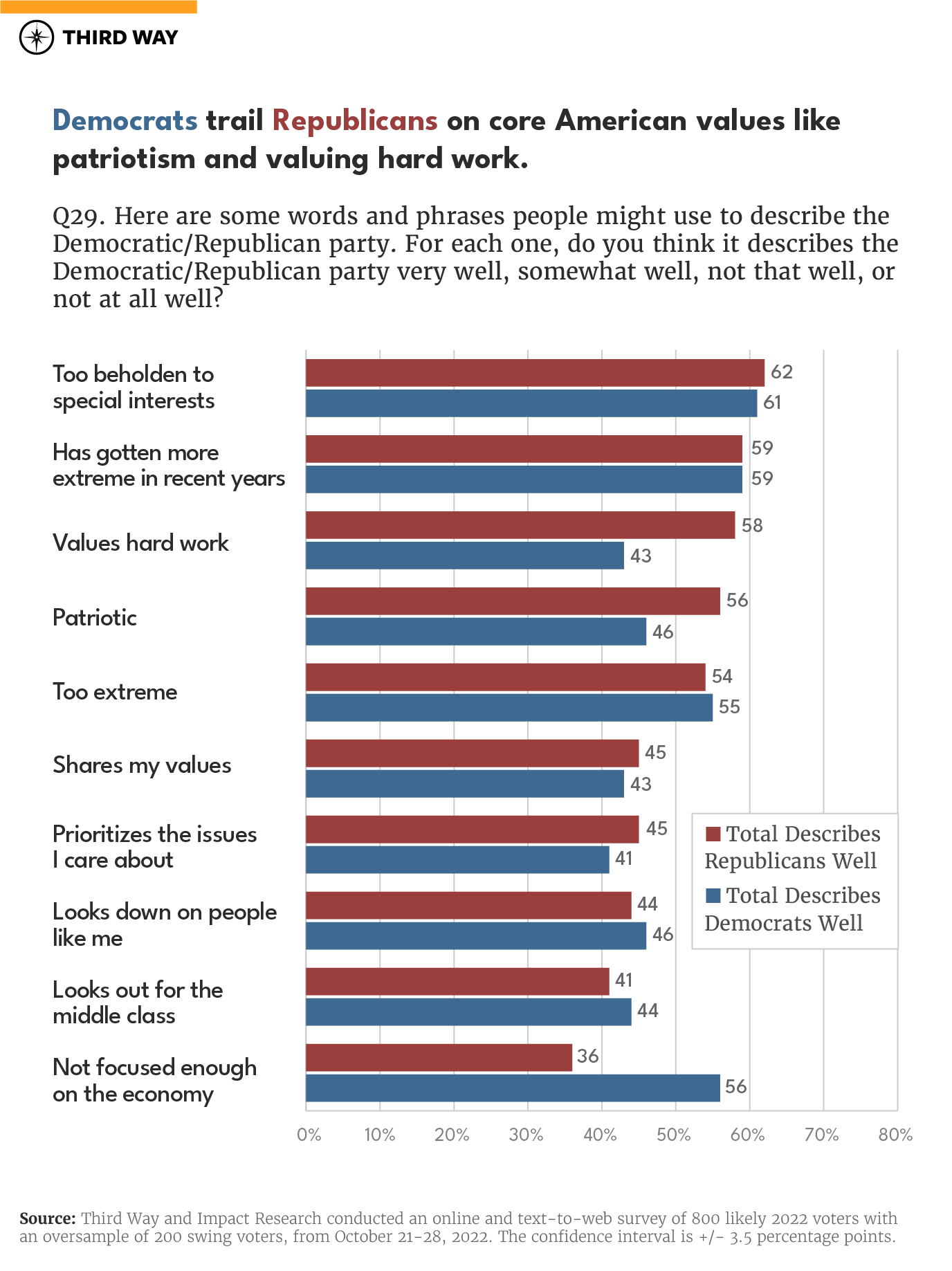 Given voters’ misgivings about the Democratic Party writ large, it is clear that Democrats who overperform in the midterms will have succeeded in distinguishing themselves from the national party brand, with personal favorability that overcomes the liability of the “D” label.

Voters also perceive the current slate of Republican candidates to be more extreme; when asked which party has nominated more extreme candidates, voters choose Republicans by a seven-point margin (44%-37%). Among swing voters, that margin was twenty points (36%-16%). Conversely, when asked which party has nominated the most moderate candidates for Congress this cycle, 34% chose Democrats while 25% chose Republicans. For Democratic candidates who overcome the headwinds in 2022, it will be because they were seen as mainstream, despite the baggage of their party brand, compared to their opponents who were extreme in the minds of swing voters.

The generic ballot leading up to the midterms is tight, and it’s anyone’s guess what the final House and Senate margins will be. But in the long-term, Democrats must face up to the challenge of convincing voters that they are the reasonable, mainstream, and competent party to preserve themselves as a palatable alternative to Republicans’ increasing extremism. This task will require convincing voters that Democrats will prioritize and deliver on their most central concerns and govern in a way that respects common American values like patriotism and valuing hard work. If Democrats cannot shift the party brand ahead of 2024, democracy itself will be at stake.

Third Way and Impact Research conducted an online and text-to-web survey of 800 likely 2022 voters with an oversample of 200 swing voters, from October 21-28, 2022. The confidence interval for the main sample is +/- 3.5 percentage points.