In 1976, the maximum Pell Grant—the federal government’s flagship program for providing financial aid to students from low-income backgrounds—covered about 80% of the costs of attending a public four-year college.1 By 2016, the maximum Pell award covered only about 30% of those costs.2 That’s a precipitous drop in purchasing power, and it has had the starkest impact on students with the greatest financial need.

That’s why there is a growing movement supported by more than 300 organizations, nearly 900 institutions of higher education, and the Biden Administration to double the existing Pell Grant.3 Doubling Pell would help keep a college education within reach for millions of low-income students and enhance equity in college access by directing the largest per-student increase in aid dollars to students of color.4 It would also represent a significant down payment toward another progressive priority: making public colleges tuition- or debt-free. This analysis digs into how doubling the Pell Grant would impact the purchasing power of low- and middle-income students at public two- and four-year colleges in each state, showing that:

From the data, it’s clear that doubling Pell is a critical step in expanding college access and affordability for students with the most financial need—and that proponents of national free college should embrace the call to double Pell among other key federal and state funding priorities for higher education.

There are multiple ways lawmakers could go about “doubling” the Pell Grant.5 This analysis applies the following approach to the 2018-2019 Pell award:

Comparing these values to the costs of in-state tuition and fees at public colleges in the same year—which averaged $3,313 at public two-year institutions and $9,212 at public four-year institutions nationally in 2018-2019—we see that doubling Pell would fully cover both of those amounts, effectively making public college tuition-free for students receiving the average grant award or above.7 But national averages can obscure the wide variation in costs and opportunities experienced by students in each of the 50 states. Looking at the average costs by state allows us to get a more granular sense of how far doubling the Pell Grant would go to make a public college education more affordable and accessible for low-income students across the country.

To do this, we map out how the doubled average and maximum Pell Grant amounts would stack up against average costs in three categories, which we unpack in this order:

Doubling Pell by the Numbers

Doubling the Pell Grant would yield a larger average grant award of $10,513, which would fully cover the cost of in-state tuition and fees for the average Pell Grant recipient attending public two-year schools in all 50 states, ranging from covering 138% percent of costs for New Hampshire community college students all the way up to 827% of the costs for students in California. Likewise, doubling the maximum grant to $12,190 would fully cover tuition and fees at two-year public colleges for max-Pell recipients in all states, up to as much as 959% of tuition and fee costs for students in California. This means that doubling Pell would have the effect of creating tuition-free community college for students receiving the average Pell Grant award or above in every state across the country. And if community colleges tuition is eliminated through a federal-state partnership under the Biden Administration, grantees can use their Pell dollars to pay for non-tuition expenses (like books, housing, food, and childcare) up to their full cost of attendance, meaning that those percentage point increases above 100% of tuition and fee charges still represent aid that can help students persist and complete their degrees. 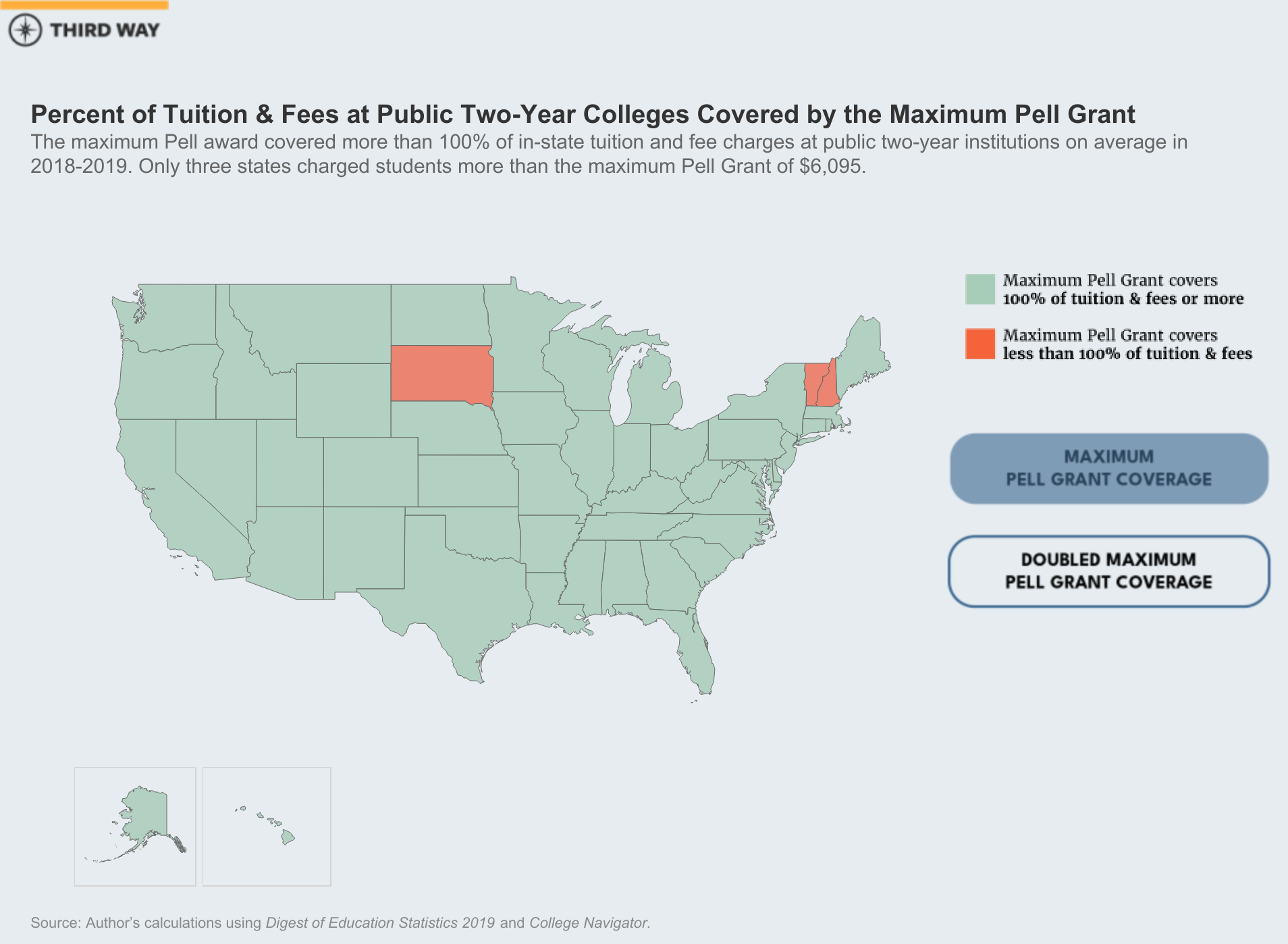 Turning to public four-year schools, we see that the average Pell award is not currently sufficient for recipients to cover the average cost of in-state tuition and required fees in any state, though Florida (at 99% covered) and Wyoming (at 96% covered) come significantly closer than other states (the next highest being Nevada at 76%). We also see that the maximum grant does not cover the average cost of tuition and fees at public four-year schools for Pell students in most states, with only three states (Florida, Nevada, and Wyoming) charging, on average, less than the maximum grant.

Doubling Pell would have a moderate impact here: doing so would cover 100% or more of the cost of tuition and fees for recipients of the average grant award attending public four-year schools in 35 states, but with a large gap in how far that coverage would stretch, ranging from as much as 237% in Florida down to only 63% in Vermont. The doubled maximum grant would go further, allowing max-Pell grantees to attend four-year public institutions tuition-free in 39 states and have at least 90% of average tuition and fees covered in six other states. The maximum grant would stretch the shortest for recipients in New Hampshire, where it would cover only 75% of average tuition and fees. 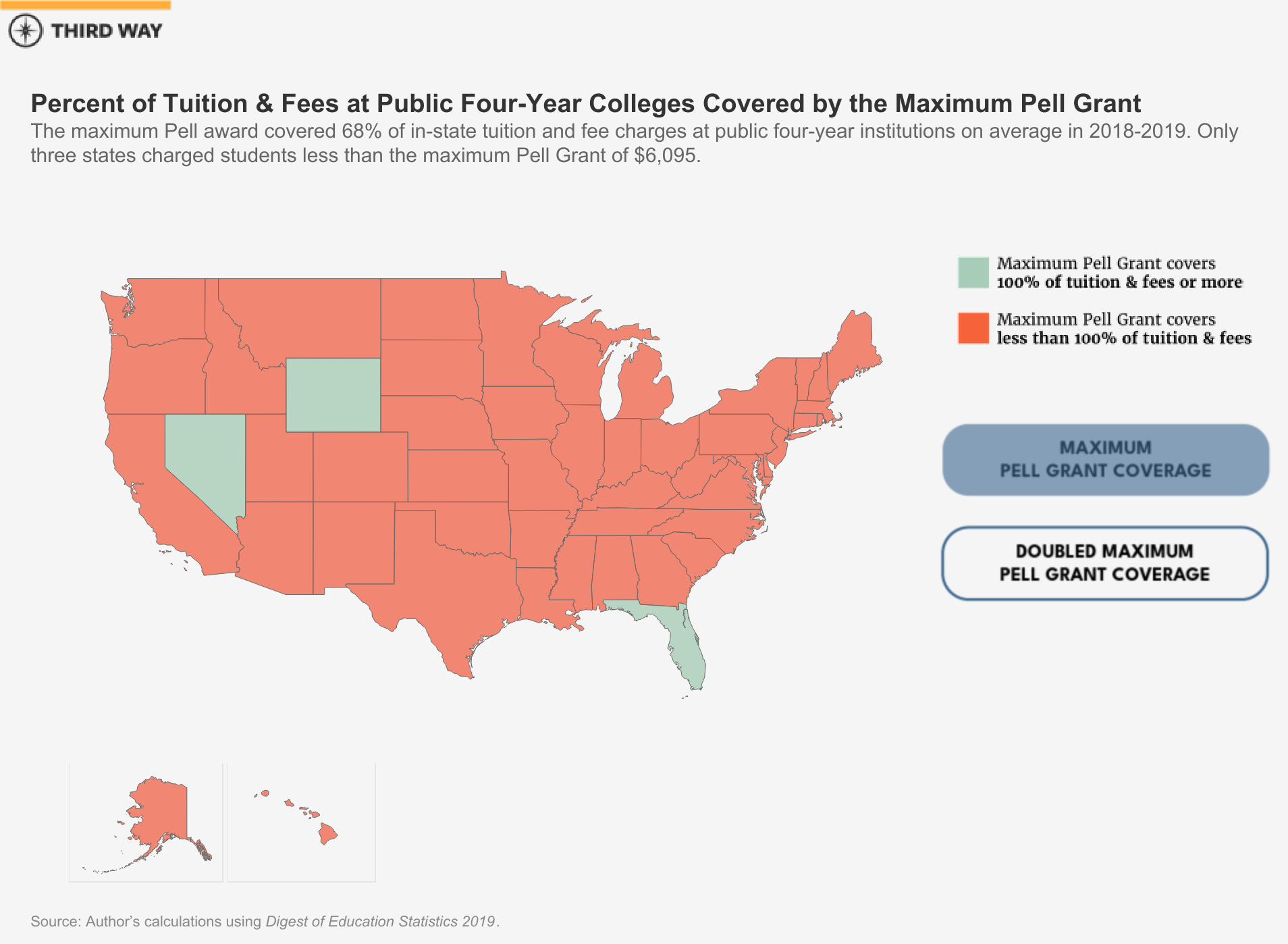 Next, let’s look more closely at the overall cost of attendance for Pell recipients at public two-year colleges. Cost of attendance goes beyond tuition and fees to incorporate the many other expenses involved in pursuing a college education, including meeting basic needs like food and housing, paying for transportation and childcare, and purchasing books and supplies needed for coursework. Because only about 1% of community college students live on campus, this analysis focuses specifically on students living off campus, who fall into two primary categories: those living off campus with family and those living off campus, not with family.9 It is important to note that while federal data indicate that community college students living with family incur roughly half the costs of those who do not ($9,369 compared to $18,256 in 2018-2019), there is in reality significant variation in the financial contributions expected of students living at home, many of whom pay rent to family and are responsible for covering other personal expenses.10

Focusing first on in-state community college students living off campus with family, we see that the average Pell Grant does not cover their average total cost of attendance in any state, and the maximum grant covers the full cost of attendance in only one state (Hawaii). This indicates that low-income students across the country—even those attending lower-cost public two-year schools and living at home to help minimize expenses—often have no choice but to rely to some degree on personal funds or student loans to cover the total cost of their education. By doubling Pell, recipients of the average grant award or above would see their total cost of attendance fully covered in 41 states (with six others seeing more than 90% of costs covered), and recipients of the maximum grant would be fully covered in 47 states (excluding Minnesota, New Hampshire, and Vermont)—meaning that doubling the Pell Grant would approach providing debt-free public community college for students in this category in nearly every state.

There is broad consensus that earning a college degree must be more affordable for low- and middle-income students across the country—without having to rely on unwieldy student loans. Doing so will require targeted investments in both students and the institutions in which they enroll, and the Biden Administration has shown a clear commitment to these interconnected goals in its first 100 days by proposing to make community college tuition-free through a federal-state partnership and increase the Pell Grant by $1,800 as an important first step in restoring its purchasing power.11

These policies would work in concert to improve college access and success by ensuring that more students can afford to pursue a postsecondary credential and that the institutions they attend are equipped to serve them well. Taking the next step to fully double the current maximum Pell Grant will be critical to fulfilling this mission. The Pell Grant program is explicitly designed to target aid funding to those students who need financial support in accessing higher education the most. Two-thirds of Pell recipients come from families earning less than $30,000 per year.12 On average, students of color—Black students, Hispanic students, Asian students, and students of two or more races—receive higher annual dollar amounts of aid from the Pell Grant than white students.13 Pell is a preexisting, highly bipartisan, and well-proven vehicle for directing financial assistance to students from populations historically underrepresented in higher education, and as a direct-to-student benefit that can be used to cover expenses beyond tuition, Pell Grants can work in conjunction with other key affordability policies to target the barriers to retention and attainment posed by a student’s total cost of attendance.

Doubling Pell and tying future increases to inflation presents a compelling approach to making college more affordable for low-income students and students of color, including the 555,000 students who will be newly eligible for Pell and additional 1.7 million current recipients who will now be eligible for the maximum grant under the most recent revision of the formula.14 Doubling Pell alone will not be a cure-all for college affordability, and it should not be taken as a substitute for adequate state funding for public institutions or increased federal outlays for higher education through new and sustained investments in student financial aid, institutional support, and student success programs. Rather, what’s clear is that in tandem with other targeted investments, doubling Pell offers a smart, effective, and politically popular way to better support students with the greatest financial need—and it makes a significant down payment toward future conversations around free college. While states and institutions confront the many challenges of bouncing back from the pandemic, an infusion of federal funding for the Pell Grant program is both long-overdue and a high-leverage policy avenue for advancing equity in higher education and bolstering opportunity for American students.

The maximum Pell Grant for the current 2020-2021 academic year is $6,345. The method of doubling Pell used in this analysis would result in the maximum Pell Grant being increased to $12,690 for students with a $0 estimated family contribution (EFC). Doubling the maximum grant award in this way would also result in expanded Pell eligibility up the income distribution, and it would mean that students receiving a partial Pell award would see their grant amount increase by more than double.

Throughout the analysis of in-state tuition and fee charges we use college costs and Pell award levels from the 2018-2019 academic year, the most recent for which data are available in the Digest of Education Statistics. From looking at the difference between the maximum award and the average grant, we can determine that the average Pell recipient in 2018-2019 had an EFC of $1,677. The increased value of the average award could then be calculated as $12,190 (maximum grant) minus $1,677 (EFC), which yields a Pell award of $10,513—greater than its strictly doubled amount.

In the analysis of total cost of attendance, we use 2014-2015 data, the most recent state-level data in the Digest of Education Statistics. From this, we see that the size of the gap between the two categories of off-campus students has remained consistent in the intervening years, with an average total cost of attendance in 2014-2015 of $8,762 for students living with family and $16,336 for those not living with family, compared to $9,369 for the former and $18,256 for the latter in 2018-2019.15 The maximum Pell Grant award for 2014-2015 was $5,730 and the average award was $3,973.16 Using the same formula to double Pell as above would yield a maximum grant of $11,460 and an average grant of $9,703; these are the doubled amounts used in comparing the increased Pell award to cost of attendance by state.