Is the state of the labor market strong? Judging by recent gains in household income and private-sector jobs, it seems to be. But beneath the surface, the jury is still out. Over the last year, we have delved into three major factors that contribute to this mixed economic picture: the employment-to-population ratio, the productivity slowdown, and the depressed rate of job hires. The next issue in this series is labor market churn.

Churn represents the flow of workers who start or leave a job over a given amount of time. One important aspect of churn is the rate at which workers voluntarily quit their jobs. Since the recession, the average number of quits per month has increased from 1.8 million in 2009 to 2.8 million in 2015—an increase of more than 50%. That should be a good sign, because rising quits theoretically indicate that wage growth will follow. In reality, there has been some wage growth, but not as much as we would expect.

This report explains why quits indicate a healthy job market and investigates whether labor force reentry and lateral job moves are interfering with the traditional relationship between quits and wage growth. 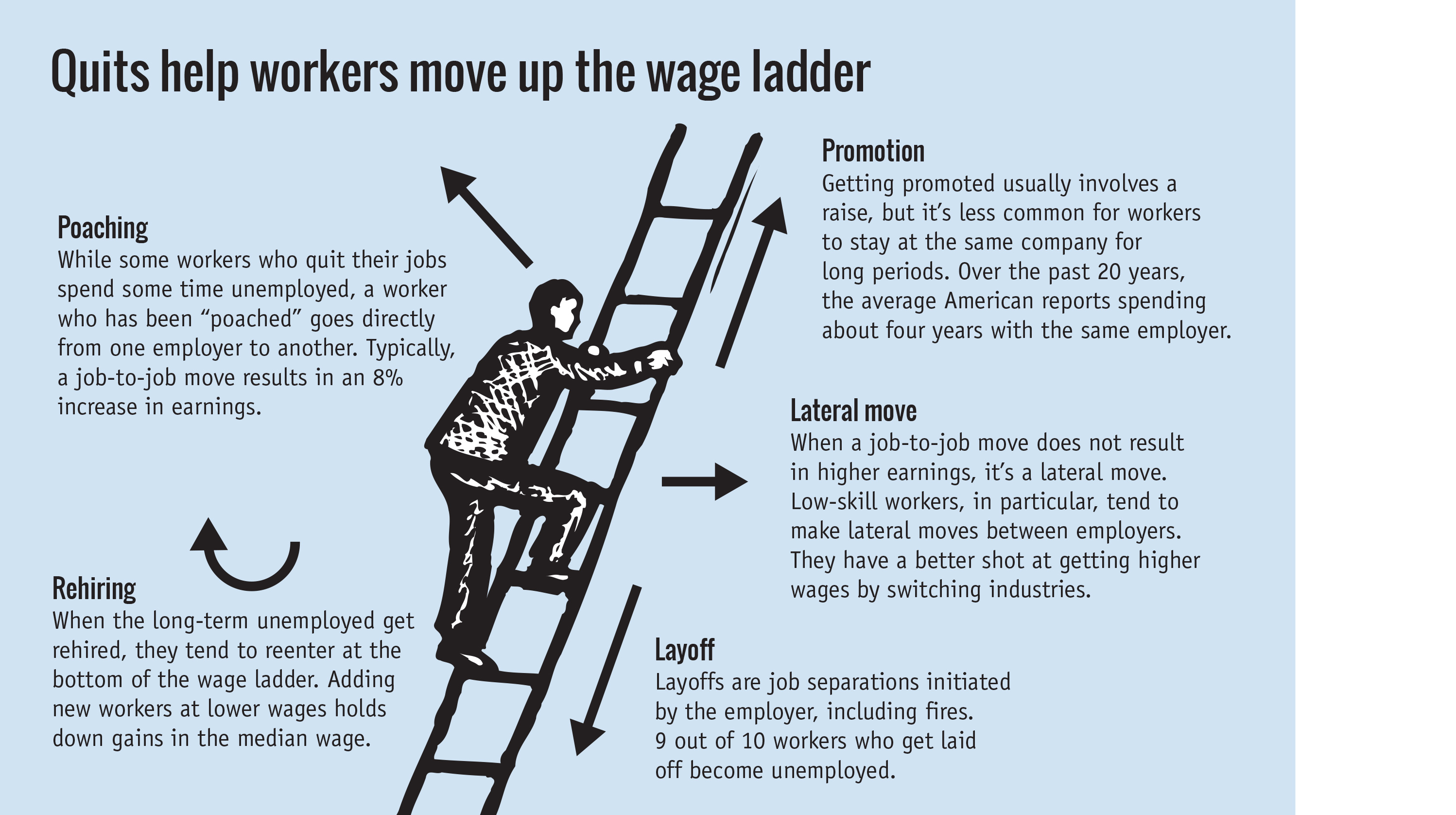 Quitting is a good thing

The U.S. has extremely flexible labor markets. As a result, we typically have a high level of churn, or turnover. That’s generally a good thing, because it means that the labor market is dynamic. We can gauge whether the labor market is stagnant or dynamic if we know whether people work for the same organization for a long time or if they are moving around from job to job. We also want to know why they are leaving their jobs—is it because they quit voluntarily or because they were laid off?

This level of detail isn’t incorporated into the monthly Jobs Report. If an individual quits a job and is rehired within the same month, the employment rate remains the same. So, in 2001, the BLS started to collect information on job openings, labor turnover, and separations for a monthly release known as the JOLTS Report.

The focus of this memo is vacancies. New vacancies are called separations. This term is used any time a worker’s job ends, for any reason. The BLS then breaks down separations into three types: quits (worker-initiated); layoffs (employer-initiated, including fires); and other separations (mainly retirements).

The relationship between quits and layoffs is an important economic indicator. Generally, individuals who are willing to quit their current jobs feel confident that they will be able to find another job relatively soon. Often, they already have their next job lined up. For every 10 workers who quit their jobs, only 1.6 become unemployed, compared to 9 for every 10 workers who get laid off.1

What’s going on:
When the economy is expanding, quits should rise. We can see two instances of this trend in the graph above: from 2003 to 2006, and from 2010 through today.

Since the recovery, layoffs have leveled off, while quits have risen markedly. This is a sign of economic health.

Furthermore, when someone quits, it indicates the belief that he or she will be better off if they leave their job. Usually, people who quit move on to better-paying jobs. The typical job-to-job move results in an 8% increase in earnings.2

Changing jobs generates more wage growth than staying in the same job, so we should see a pickup in wage growth when quits rise. But median wages have been stagnant for quite some time. Although real household income grew by 5.2% in the past year, real earnings grew by a less robust 2.1%. This distinction is important, because income includes nonwage sources of income, like public assistance and retirement income. Earnings, on the other hand, just measure wages earned in exchange for work. Furthermore, over the past decade, earnings have grown faster for the top 50% of workers than for the bottom 50%.3

What’s going on:
Going back to 2001, median earnings have been generally flat. Middle-class Americans who work full time only make $10.20 per week more in 2015 than in 2001, after adjusting for inflation.4

In the short term, the link between quits and wages may not be as strong because more people are getting hired out of unemployment and returning to the labor force. This is called labor market repair, and it’s a natural part of the recovery from the recession, especially one this deep. But it has a surprising effect on wage growth: Even though the unemployment rate has gone down, wages do not necessarily go up.

Here’s why this is happening. Since the recession ended, 4.7 million people have joined the labor force. Many of them are returnees—individuals who dropped out of the labor force when jobs were hard to come by. Their reentry shows that they are optimistic that they will be able to get a job. Often, this is because they perceive that there are a lot of job openings and that other unemployed people are getting hired. But returnees and previously unemployed individuals are more likely to fill lower-paying jobs because they are generally less competitive in the job market. This can increase the share of low-paying jobs in the overall economy, which brings down the median wage.5

Second, returnees increase the supply of labor, which increases competition for job openings. Given that they are mainly in the running for lower-paying jobs, the availability of returnees and the unemployed makes it harder for the workers in those jobs to negotiate higher wages. After all, they can easily be replaced by job applicants who have even less bargaining power.

During the Great Recession and the years that followed, there were more low-skill, low-productivity workers leaving and returning to the labor force than during past recessions.6 But since this trend is specific to the ups and downs of the business cycle, it is probably temporary. That’s why it’s described by economists as being cyclical. The recent uptick in incomes and wages over the past year may indicate that the labor market is nearly finished repairing itself—what economists call “full employment.”

Getting more returnees and unemployed people to work is a good thing, but we’d be even better off if there were more jobs for them and existing workers to choose from. We don’t want people to linger in low-wage jobs or bounce back and forth between employment and unemployment—we want them to climb the ladder toward better-paying jobs.

Many job changers are “poached” by other firms, which often results in higher pay. Economists describe this progress for individuals as moving up the wage ladder. But over the long term, advancement up the ladder from lower-paying to higher-paying jobs has gotten slower. Because this slowdown began before the last recession, economists have suggested that this may be a structural change, meaning one that will endure past the current business cycle.7

According to an analysis by Census Bureau economists, about half of all job changes occur within the same industry. These moves don’t bump up pay by much.8 Moves from industry to industry give quitters a better shot at getting a pay raise, but it depends on which industry they are leaving, and which industry they are entering. A job seeker’s best chance of earning a wage increase is to switch to a high-wage, high-growth industry. But there is a limited share of industries that meet both of those criteria. One that does is professional and business services. Think of consulting firms that advise other companies on management, scientific, or technical issues.9 It’s a growing industry with above-average wages, and it’s the top destination for industry switchers.10

Some of the highest-paying industries, however, are shrinking. Mining and logging offers very high wages, but the industry is small and shrinking. Information services, despite its prestige, has been getting smaller because more and more jobs like data processing can be automated. Although getting a job in manufacturing still pays well—about 20% more than the average private-sector wage—productivity gains in the industry have pushed employment down by 28% since its high in 1979. The BLS projects that manufacturing will lose another 282,100 jobs between 2014 and 2024.11

Meanwhile, industries with below-average wages are growing in size. Many of these are jobs that consist of repetitive, standardized tasks that still need to be performed by humans.12 Nowhere is this more apparent than in leisure and hospitality jobs, which have doubled over the last 30 years. These jobs, however, pay 55% below the weekly average for the private sector.13 People in the leisure and hospitality industry quit their jobs frequently—about twice as often as average workers do—but 44% of them remain in the industry for their next job.14 Unfortunately, it’s not a recipe for wage growth.

Fundamental changes in the economy, like globalization and automation, are behind these long-term industry trends. Employers and workers both face obstacles for overcoming them. Employers need to be convinced that job seekers will have the skills needed to work in high-wage, high-growth industries. And workers planning for the next step in their careers need to believe that there will be enough jobs in high-wage, high-growth industries to go around.

Quits help the labor market move forward. It’s a good thing when workers make a transition. They’re generally able to remain employed; it creates opportunities for the unemployed to fill their vacancies; and they often receive higher pay from their new employer. But those wage gains have been slow to develop this time around. That’s partly because of how many long-term unemployed workers have had to return from the Great Recession. And it’s partly because of the longer-term shift in the types of jobs available in the 21st Century.

Both of these trends could be addressed by creating more jobs. Increasing the number of available jobs would give workers more opportunities to get ahead. And more demand for labor would put pressure on wages to go up. That creates more prosperity for working Americans in the 21st Century.