A key measure of whether an institution is providing value to its students is whether students are able to pay down the debt they took out to finance their education at that school. To date, the federal government has done this using a measurement known as a Cohort Default Rate (CDR), which captures the percentage of students who default on their loans within three years of leaving school. If a school has 30% of its students defaulting for three consecutive years or 40% in a single year, they risk losing access to federal student aid.

We know the current CDR is an imperfect measure, as schools can find ways to help students evade the worst-case scenario of default by encouraging distressed borrowers to enter into forbearance or income-driven repayment plans that allow for little to no repayment progress on educational debts.1 That’s why policymakers looking to reauthorize the Higher Education Act (HEA) have discussed using a “loan repayment rate,” which measures whether student borrowers are able to reduce the principal on their federal loans within a few years of leaving an institution (by making payments that cover more than their loan’s interest).2 And while it would be easy to assume that measuring the number of institution’s students that are able to pay down their principal would also flag schools where many students are heading towards default, the Venn diagram of institutions caught by a poor loan repayment rate and high CDR don’t always overlap. Here’s why.

Using a loan repayment rate by itself may fail to capture some institutions or higher education programs currently at risk of failing CDR. This is because a loan repayment rate and CDR measure two different things: a loan repayment rate measures the percentage of student borrowers that are able to begin paying down their loan principal, while CDR measures the percentage of student borrowers who have entered default.3 That means that schools that leave most of their students with minimal job prospects and unmanageable debt may still be able to pass a CDR test if their former students primarily enroll in loan repayment plans meant for distressed borrowers, like forbearance or income-based repayment. Similarly, an institution may be able to pass a loan repayment test even with a high number of borrowers ending up in default if, for example, they have a few programs that produce good outcomes but have others that leave students with minimal job prospects and unmanageable debt.

Not every institution with high default rates will have corresponding low repayment rates. Some even show more students paying down their loan principal than defaulting on their loans. For example, eight of the 49 institutions that currently show at least 30% of student borrowers defaulting—meaning they are flagged by the current CDR rule—also show more than 30% of students able to pay down at least $1 on their loan principal within three years of leaving.4 It’s possible that one or two very poor performing programs at these institutions lead to high levels of default for those students, while other programs lead to successful repayment for other borrowers at that institution. Also possible is that the institution serves one group of students very well but leaves others worse off than when they enrolled. For example, University X may offer two programs to its students: a medical coding program that leaves most of its students in default and a nursing program that shows most students able to pay down their loan principal after attending. While University X may meet a certain loan repayment threshold, it could also fail a CDR test. Similarly, University Y may leave most of its students with unmanageable debt after they attend, yet encourage them to enroll in a repayment plan for distressed borrowers that allows them to avoid default. In this scenario, University Y would likely fail a loan repayment test, yet pass the current CDR threshold. Unfortunately, both schools in this scenario are failing many of their students. 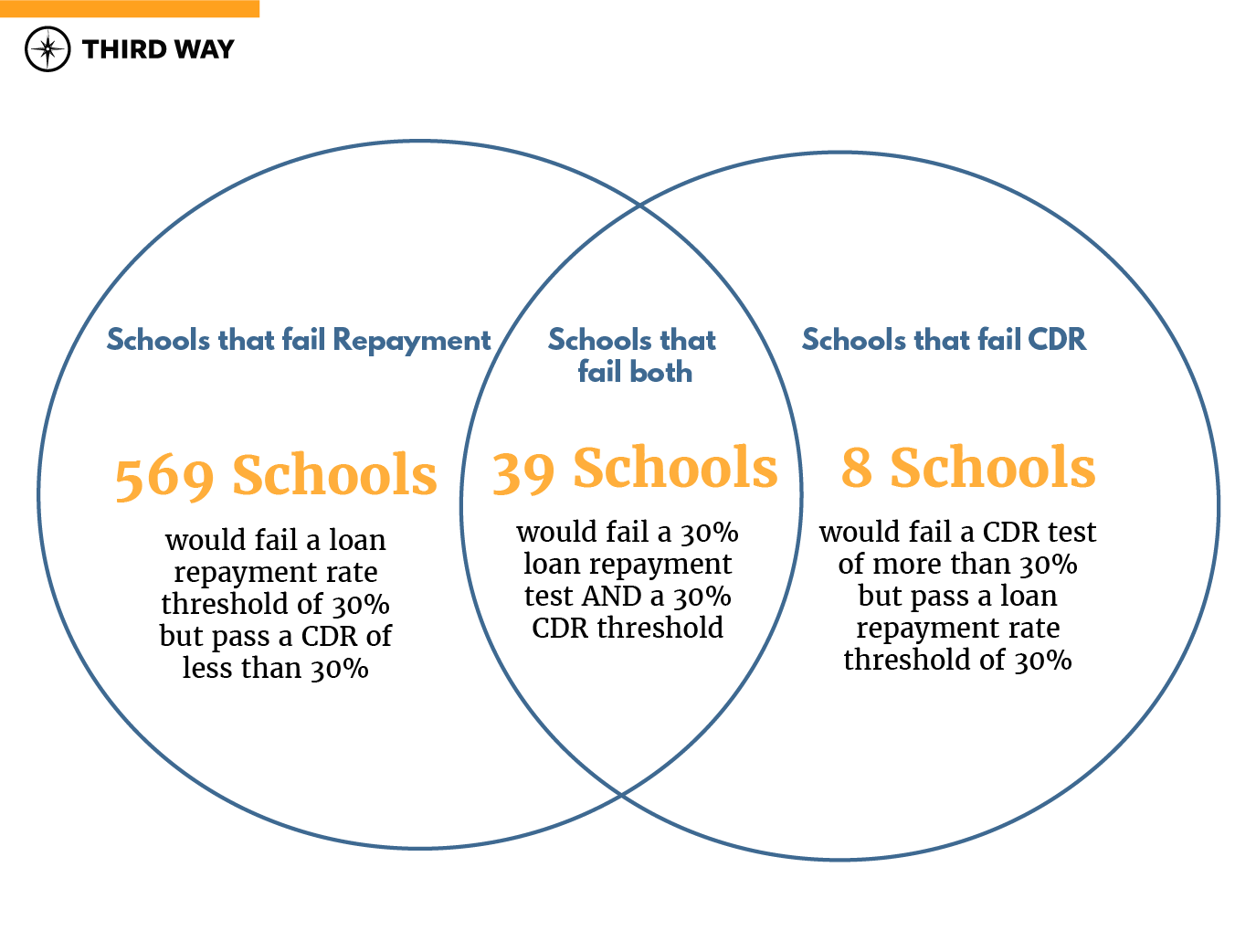 In short, this is why multiple metrics of success are important. Simply replacing the CDR with a loan repayment rate will not accurately capture all institutions that fail to provide value to their students. That’s why an update to a federal framework to hold institutions accountable should include both CDR and a loan repayment rate. Because if we fail to have both accountability measures in place, we may end up with either too many students defaulting (the worst case scenario for them personally) or too many students unable to make progress in paying down their loan principal (meaning their balance is growing over time, not shrinking)—both scenarios that harm students and the taxpayers who help subsidize their educational pursuits.