At the end of May, President Donald Trump stormed out of an infrastructure meeting with Speaker Nancy Pelosi and Senate Minority Leader Chuck Schumer over the tertiary issue of how Congress should conduct oversight on his Administration. But while the President continues to hold vital funding hostage to his own political troubles, our infrastructure continues to deteriorate.

The average age of all bridges in the United States is 44 years old. According to the most recent data from the Federal Highway Administration, of the nearly 730,000 bridges in the US, over 300,000—approximately 40%—are over 50 years old.1 But there are certain bridges, constructed in a way that makes them far more prone to collapse, that have an average age of 82 years.2 We need to fix them. These bridges are designed with many of the same deficiencies as the bridge spanning the Mississippi River in downtown Minneapolis that collapsed in 2007, causing 13 deaths and 145 injuries.3 But the problem is far more extensive than most realize. In fact, there are nearly 5,000 bridges at serious risk of collapse—at least one in every state. The danger of these bridges to the traveling public, to the critical food supply chain, and to our national security has been largely ignored for decades.

Infrastructure improvements are always popular in America, but the issue has never been as salient with voters as it is now. In the midst of today’s political insanity, a simple campaign promise by candidate Gretchen Whitmer to “fix the damn roads” catapulted her to victory in both the contested primary, and the general election for the Michigan governorship.4 Danica Roem became America’s first transgender state legislator, not by running as a trailblazer, but by running on the issue of local traffic congestion.

The US has an ailing transportation system affecting communities in every state. And within that system is an especially pernicious problem: the failing state of US bridges. We need an infrastructure bill, and we need to fix the damn bridges.

The Problem with Bridges

In order to understand the severity of our nation’s bridges, it’s important to know three key terms: redundancy, fracture critical, and structural deficiency.

A fracture critical component, on the other hand, would cause a bridge to collapse if it failed. According to the most recently published data from the Department of Transportation, there are over 18,000 fracture critical bridges in the US.5 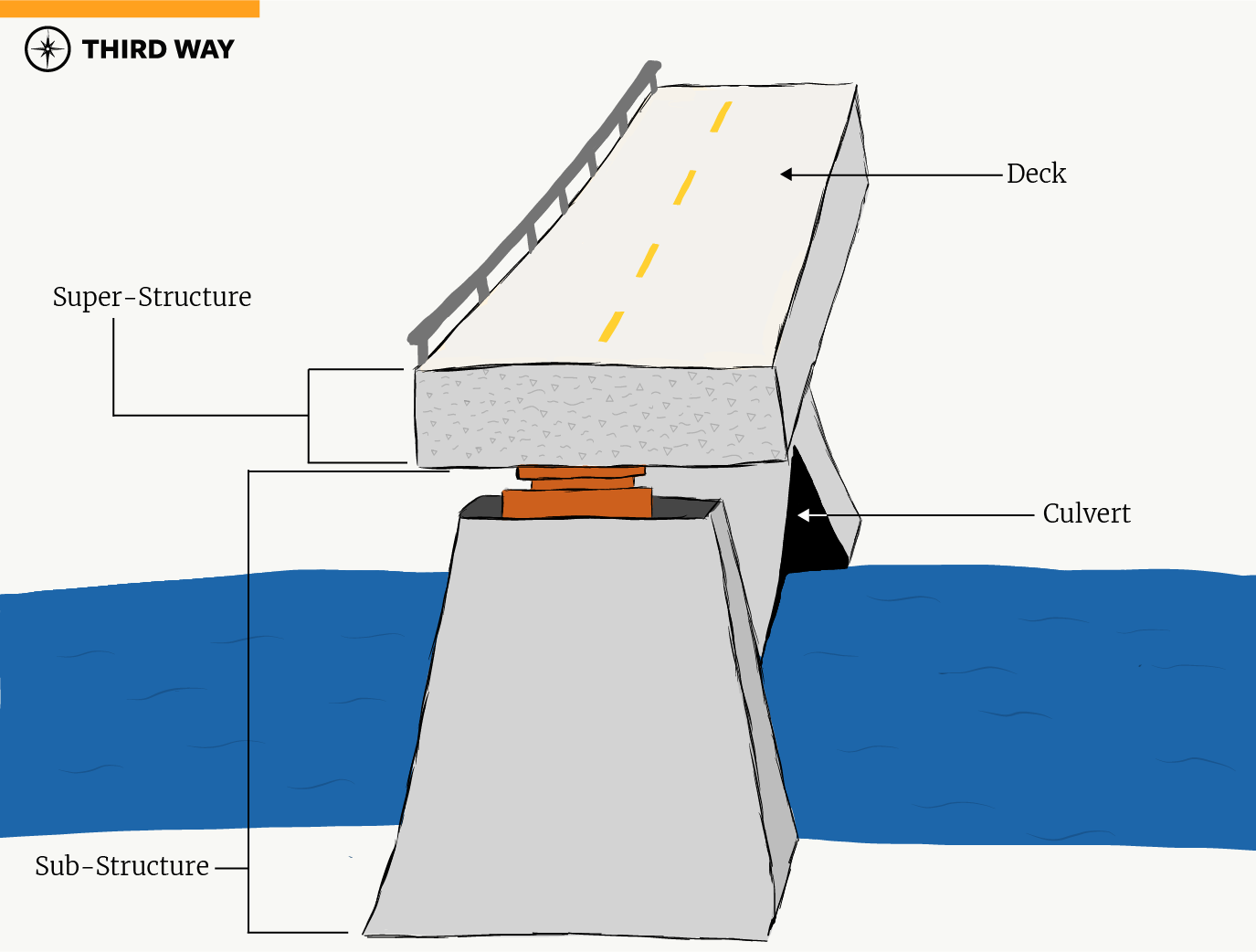 A structurally deficient bridge is one that has received the lowest safety rating from the National Bridge Inventory. This database, maintained by the Federal Highway Administration, assesses four parts of each bridge: the deck, superstructure, substructure, and culvert. The condition of the entire bridge is then assigned one of three ratings. Any component receiving the lowest rating (less than or equal to 4 out of 10) is considered structurally deficient.6 The Department of Transportation’s most recently available data indicate that over 47,000 US bridges are structurally deficient.7

Even more concerning is how frequently these bridges are used. Every day, some 19.6 million trips are made across structurally deficient fracture critical bridges.11 Collapse threatens lives and property, and the ensuing repairs to a collapsed bridge seriously impact the communities on both sides of the crossing.

First, current funding is woefully inadequate. At the current rate of infrastructure improvement, it would take over 80 years to make the significant repairs needed to fix the bridges.13 The Highway Trust Fund, which was established as part of the Federal Aid Highway Act of 1956, hosts the account to construct and repair surface transportation projects. It receives funding though the federal fuel tax (18.4 cents per gallon of gasoline and 24.4 cents per gallon of diesel). But these levies haven’t changed since they were implemented in 1993 during the Clinton Administration. The purchasing power of funds contributed to the Highway Trust Fund in 2018 was just 64 cents for every dollar paid into it in 1993, according to the Institute of Taxation and Economic Policy.14 They estimate that 5 cents of the decline in purchasing power is due to fuel economy (14%), and 31 cents is due to construction inflation (86%).15

Second, the funding stream will likely not keep up with transportation trends. New vehicle fuel economy has increased by nearly 10 miles per gallon between 1993 and 2016, according to the Bureau of Transportation Statistics.16 Yet electric, hybrid, and internal combustion vehicles do the same amount of damage to roads and bridges, despite being charged less (if at all) in taxes at the pump. Reducing greenhouse emissions is great for addressing climate change, but funding for needed infrastructure repairs to a rapidly deteriorating system of roads and bridges has failed to adapt to these changing conditions. And without funding for ongoing maintenance costs, bridges and other infrastructure deteriorate much faster and cost considerably more to repair.

Finally, there is an issue with how federal funds can be used for local projects. The Transportation Infrastructure Finance and Innovation Act (TIFIA) provides low-interest loans and credit assistance for surface transportation projects. While the program’s success has led it to become a model for other federal infrastructure funding schemes, some smaller municipalities feel as though they aren’t receiving enough help. Strict criteria related to minimum project cost requirements, interest rates, and required future funding channels exclude many projects.17 Easing some of the more restrictive requirements could help smaller municipalities finance critical bridge repairs.

Five thousand at-risk bridges shouldn’t be a partisan issue—it should be an emergency siren to all policymakers. Fixing them should be a top priority for any infrastructure package, and Congress should take four steps to do so.

First, a significant pool of money must be set aside for immediate repair of structurally deficient bridges with fracture critical components. There are numerous financing methods being discussed—including increasing gas and diesel taxes and indexing them to inflation, increasing vehicle registration fees, and imposing a vehicle miles-traveled tax—all of which have pros and cons. The Committee for a Responsible Federal Budget has compiled a list of funding options.

Second, smaller municipalities should have greater access to federal funding. This could come in the form of decreased cost thresholds for smaller projects, which often do not meet the minimum requirement. It could also come in the form of an increase in loan amount. Under TIFIA, the Department of Transportation can guarantee up to 49% of a project’s cost as a loan, but in reality it has limited loans and loan guarantees to 33%.18 This is particularly burdensome when dedicated revenue streams are politically difficult to secure.

Third, bridges need to be smarter. Visual inspection and other outdated assessment methods work solely to catch glaring issues with bridges, but they miss the subtler signs of structural fatigue, impact damage, and corrosion. Automated monitoring systems can scan for bridge deterioration in regular intervals, and already do so in more technologically savvy places like Hong Kong and Taiwan. These technologies could be used in the US as well to determine which bridges require immediate attention. New and old bridges can also benefit from technological advances. Things like high-performance steel, self-healing materials, and wireless inspection systems can make future construction last longer.

Finally, our bridge assessment needs an upgrade. The Federal Highway Administration’s Long-Term Bridge Performance has noted several flaws, including poorly-defined and poorly-documented data.19 Performance measuring relies too heavily on expert opinion and not on objective criteria. Vast subjectivity in rating conditions, lack of proper documentation, incomplete data, and the fact that much deterioration and damage escape visual inspection all contribute to these uncertainties.

It’s time to fix the damn bridges. By prioritizing fixing bridges that are both structurally deficient and fracture critical, the US can avert needless disasters. The current Congress and President should put aside their differences and find a way to increase funding for critical infrastructure projects. Roads, bridges, ports, and railways are the engine behind the US economy—the government should take the danger of these bridges to the traveling public, the critical food supply chain, and to our national security far more seriously.