Five Things to Know About the Indo-Pacific Economic Framework

A little-known acronym still on the horizon could be one of the Biden Administration’s biggest economic accomplishments. The Indo-Pacific Economic Framework (IPEF) is the Administration’s new effort to economically unite over a dozen countries that together constitute 40% of the world’s GDP. Why this region? The Indo-Pacific is 60% of the world’s population. It brought almost a trillion dollars of investment into the United States. And it supports key US supply chains and more than 3 million American jobs.1

Notably, IPEF is taking a different approach to global engagement than trade agreements of old. Because of that, here are five key points to know about the Indo-Pacific Economic Framework.

1. IPEF is broad, but it’s not everything.

The Department of Commerce (DoC) and United States Trade Representative (USTR) are developing the agreement from the US side and have separated IPEF into four pillars, each addressing a global economic concern. A nation can participate in whichever pillars they prefer.

While that is a lot of names to write on a masthead, this lineup bodes well for IPEF’s prospects. These are some of the most advanced economies in the world alongside some with the greatest growth potential.6 What’s notable is also who is not on the list—namely, China. President Trump’s withdrawal from the Trans-Pacific Partnership (TPP) shook the region’s confidence in American economic leadership, a gap which China was eager and quick to fill.7 With IPEF, the Biden-Harris Administration is reestablishing the United States as a reliable economic collaborator and counterweight to China.8

2. It's an executive agreement, not a trade deal.

While the acronym may remind you of NAFTA, CAFTA, or USMCA, IPEF is not a free trade agreement (FTA). The distinction is notable, as it means that participating nations won’t increase market access/reduce tariffs and that Congress isn’t required to debate and vote on the agreement.9 In short, IPEF greases the wheels of trade.

Despite lacking increased market access, IPEF has some appealing distinctions from an FTA. For one, it has the potential to be easier to implement, as participants don’t need to completely restructure their economies to be in alignment. This ease also leads to a lower barrier to entry, visible in a participant list broader than just the United States’ regional allies.10

However, free trade proponents have justified concerns. A low barrier to entry means that the subsequent policies could be less robust, as bringing 14 economies into regulatory alignment can be very difficult.

While an American cattle rancher and a Vietnamese textile worker may not face the same challenges, both could benefit from IPEF polices. Each IPEF pillar encourages labor to participate in the framework, reflecting President Biden’s commitment to a worker-focused economic agenda.11 Negotiators have yet to publicly discuss specific policies, but there is broad consensus amongst participants that IPEF should keep workers employed, expand opportunities, and increase fairness in the workplace.

This is important because the Indo-Pacific region has a challenging human and labor rights record.12 Poor wages, unsafe working conditions, and labor abuses are rampant, despite US provisions mandating that trade partners eliminate such practices.13 The Administration hopes to cultivate higher labor standards and increase transparency throughout the entire supply chain, ensuring that workplace abuse can be identified and ended.14

Economic opportunity in the digital economy also features prominently, as the DoC is collaborating with 14 major American companies to bring at least seven million digital education and training opportunities to women and girls in the region.15 These endeavors hope to bolster the Indo-Pacific’s position in tomorrow’s economy, digital or otherwise.

4. IPEF has a massive market size.

While much of what is written about Indo-Pacific trade discusses the region’s supply chain significance, its prominence as an export market is just as important. IPEF nations are vital to many sectors of the US economy, as they import everything from software to soybeans. IPEF participants currently receive approximately 19% of US exports ($385 billion), a number which is likely to increase as the region continues to grow.16 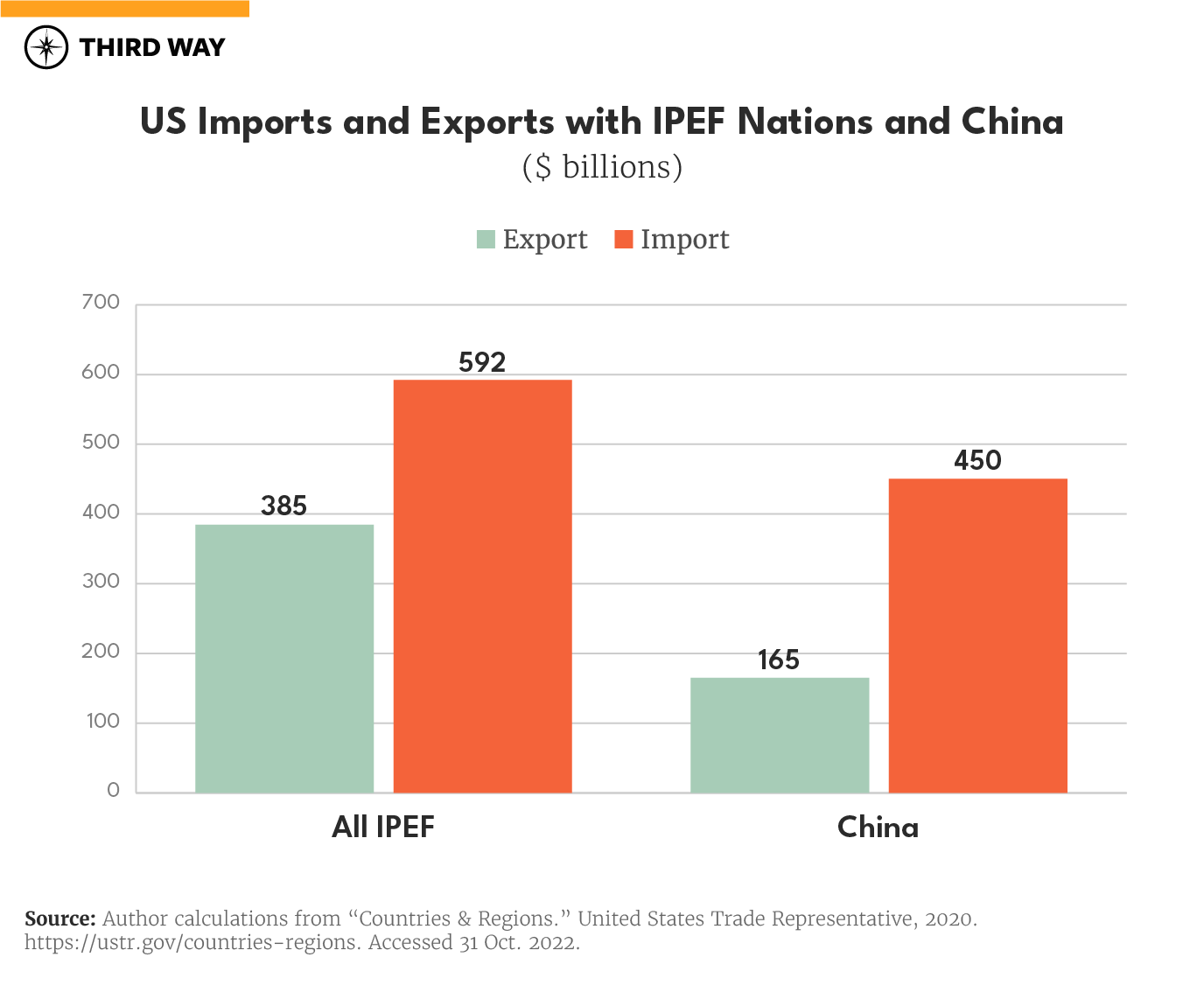 Exports to IPEF nations support 1.6 million American jobs, with many in agriculture, mining and extraction, and manufacturing.17 In addition, while famed for its semiconductor manufacturing, IPEF nations also are approximately 30% of global semiconductor imports.18 Combined with the CHIPS Act’s investment in high tech manufacturing, IPEF can help make the United States competitive in this rapidly expanding industry. Small businesses stand to benefit too. Economic analysis from the Global Innovation Forum shows that a robust digital trade component to IPEF could mean a 35% increase in sales for small business exporters, a gain of $72 billion.19 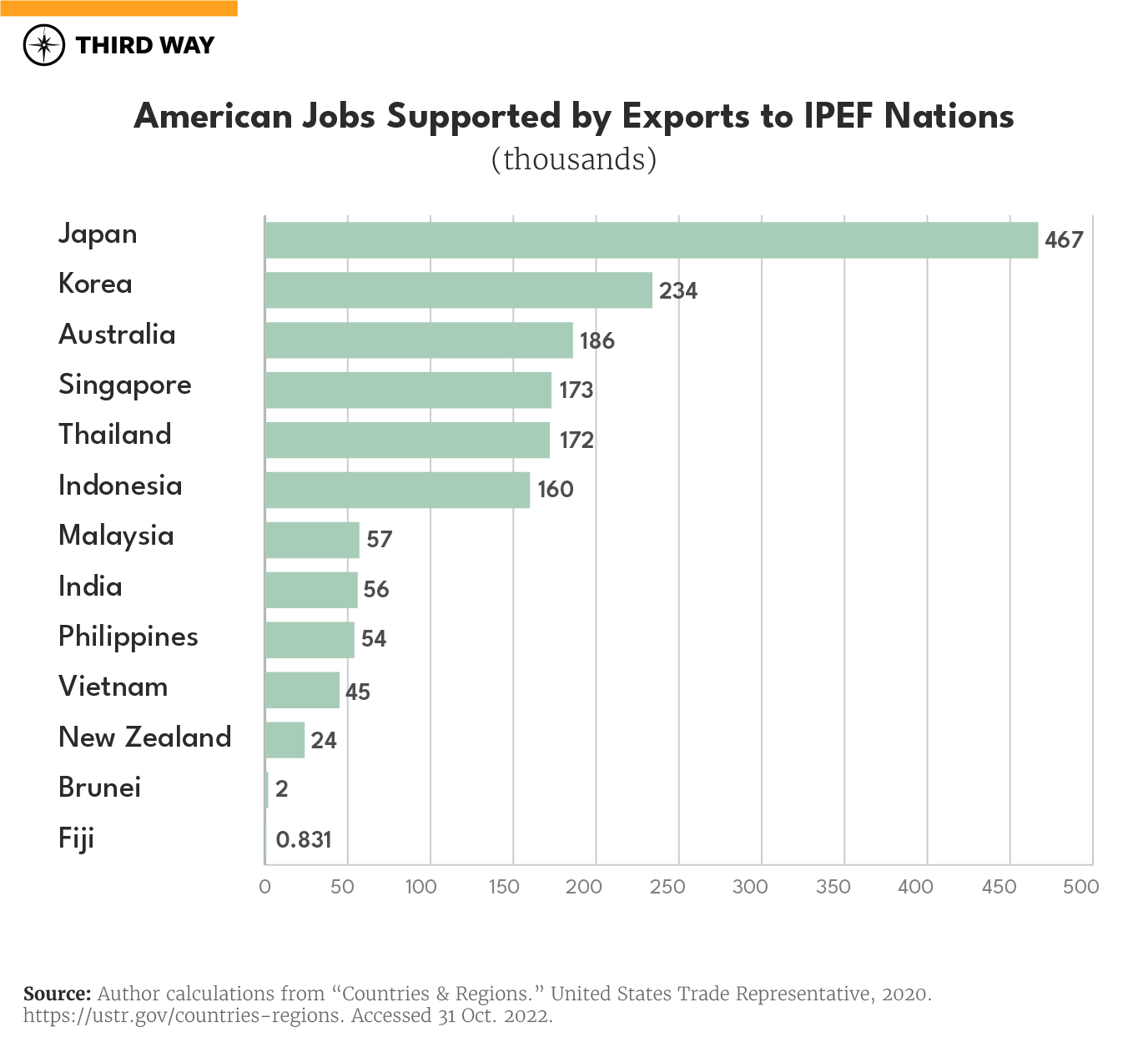 5. There are still questions to be answered.

Despite being five months old, many questions remain for IPEF. For instance, will there be more participants? Nearly all of Southeast Asia is participating and other nations are welcome to join. However, Pacific rim nations like Mexico and Chile were involved in the TPP but are absent from IPEF. Canada is interested in joining and Secretary Blinken voiced his support provided the other participants agree.20 While every nation is participating in the supply chain, clean economy, and fair economy pillars, India’s abstention from the trade pillar shows that participation need not mean total commitment.21

What about Taiwan? Its absence is noteworthy, especially given the Administration’s recent commitments to the nation’s security.22 The Taiwanese government had expressed interest in IPEF, but as of October 2022 Taiwan is not included.23 However, bipartisan discontent with Taiwan’s exclusion and the prospect of a bilateral American-Taiwanese FTA mean that Taiwan will likely remain a key topic of discussion.24

Will Congress have a role in IPEF? The constitutional difference between economic framework (a goal of the Administration) and trade agreement (congressional treaty-making power) has not persuaded Congress to relinquish input into this effort.25 Nonetheless, US Trade Representative Katherine Tai has stated that negotiators and Congress must work together to realize IPEF’s full benefits.26 What form this will take and the subsequent effect it has on the framework remain unclear.

The Administration hopes to conclude talks around November 2023. Until that point, negotiators would do well to engage with industry, labor, the trade community, and Congress. People know what to expect from an FTA. An economic framework leaves a lot of questions unanswered—and room for a diverse cross section of voices to contribute.