Within the 30 chapters of the Trans-Pacific Partnership (TPP), there are a considerable number of provisions that affect the environment. Understanding these issues will be critical as policymakers evaluate this trade deal. In this report, we summarize TPP’s environmental provisions and compare these standards with those in past U.S. trade deals.

What Are the Environmental Components of TPP?

How Do Past U.S. Trade Deals Compare with TPP on the Environment?

Since 2002, the United States has enacted trade deals with 16 countries. So how do these deals compare on environmental issues? In short, environmental standards in modern U.S. trade deals have become stronger with each successive deal, with TPP having the strongest standards. While environmental protections were an afterthought in deals like NAFTA and not a part of the actual trade text, modern trade deals handle these issues very differently. And all these provisions would have to be met by any country that joins TPP down the road.

Environmental standards in modern U.S. deals can be divided into three categories: bronze, silver, and gold.

BRONZE: The bronze category includes the George W. Bush-era trade agreements, with Chile (2004), Singapore (2004), Australia (2005), Bahrain (2006), CAFTA-DR (2006-2009), Morocco (2006), and Oman (2009). In these deals, environmental protections are in the core of the agreement (and not cast off to a side deal as was the case under NAFTA), and the agreements stipulate that each party must effectively enforce its own environmental regulations. However, these agreements only had a single enforceable provision that mandated countries could not relax enforcement of environmental laws in a way that affected trade. Simply, a country can’t stop enforcing their environmental laws for economic gain. In this category, the penalty for violators was a monetary fine, and didn’t include any suspension of trade benefits.

GOLD: TPP includes the highest environmental standards for any trade deal ever. Building on the protections in the Silver category, TPP has stronger environmental rights, better enforcement, and stiffer penalties for violators, which include stopping trade benefits. And, notably, TPP upgrades the environmental provisions with six countries (Australia, Canada, Chile, Mexico, Peru, and Singapore) with which the United States already has FTAs. Further, any countries that wish to join TPP will be required to meet these standards before acceding. 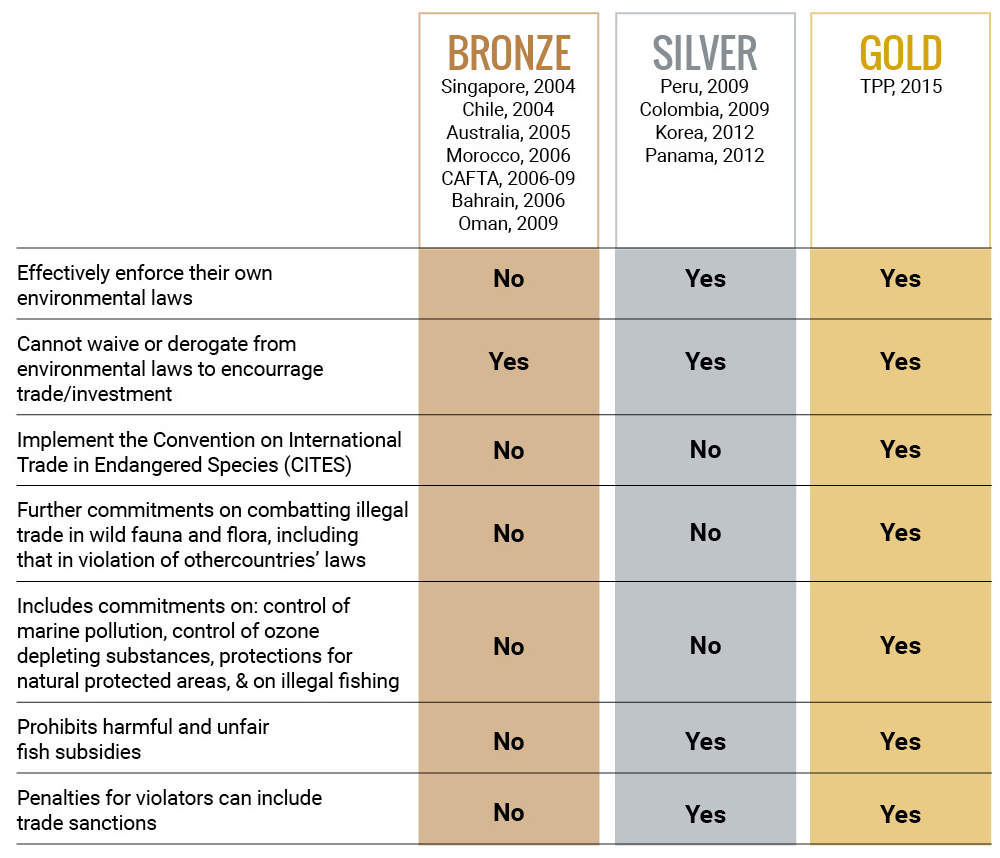 Our trade deals have come a long way since environmental provisions were virtually cast aside in NAFTA. Standards have been raised, and enforcement has become stronger. The end result is that TPP includes the strongest environmental standards in any trade deal ever. That’s why this deal has received strong support from groups like the World Wildlife Fund, The Nature Conservancy, and The Humane Society.14 That itself is impressive—and even more so when you see how far we have come.