As Democrats unpack the 2020 election and pivot from campaigning to governing, it is of vital importance to understand key voting blocs that swung the election and will determine Democrats’ electoral future in 2022 and beyond. The election cannot be boiled down to one particular group or place, but we know for certain that suburban voters were key to Joe Biden’s victory this year. Suburban voters voted at higher rates than rural or urban voters in 2020, are trending Democratic, and are more likely than the country as a whole to say they will vote in 2022. They are therefore an essential group to watch as Democrats determine their governing strategy and policy priorities.

Third Way conducted a post-election poll in collaboration with GBAO Strategy in the immediate aftermath of the November election to study the Democratic Party’s strengths and weaknesses, and the policy areas where they have a mandate to deliver. The survey included a robust number of suburban voters, a group that backed Biden by a 53–44% margin in this survey.

Democrats’ strengths are clearly defined with these voters, and their top priorities track with Biden’s agenda, indicating that their support for Democrats was likely not just opposition to Trump but real alignment with the Democratic Party. Suburban voters view Democrats as the party more likely to find common ground, share their values, and believe that everyone should follow the same rules. And they share Democrats’ priorities for the next year: getting the pandemic under control swamps other issues as their top priority, followed by pandemic economic relief and lowering health care costs.

But they perceive Democrats to be weak in important areas too, as they view Republicans as stronger on the economy by a wide margin. While Biden and Democrats will endear themselves to suburban voters by prioritizing getting the pandemic under control, their weakness on the economy—even with this voting bloc that is trending Democratic—is a red flag that should not be overlooked.

Based on self-reporting in our survey, suburban voters are more likely than urban or rural voters to plan to vote in 2022, and they are more Democratic than the electorate as a whole. A large majority of all voters say they plan to vote, but a whopping 76% of suburban voters are likely 2022 voters, an overwhelming number. While 2022 is a long way away, it is clear that suburban voters as a group are highly likely to vote, and if anything, are encouraged by 2020’s results to cast their ballots again in two years’ time.

A majority of suburban voters cast ballots for Biden this year; 53% of voters in the suburbs supported Biden compared to 50% of all voters in our survey. And according to their self-reported voting behavior, they were more likely than rural or urban voters to turn out to vote this year.

Because suburban voters are such frequent voters and plan to vote in 2022 in such high numbers, they will be important for Democrats to watch over the next two and four years. Both suburban voters’ policy priorities and their perceptions of the Democratic Party will have important bearings on the party’s coalition, and its ability to stave off typical erosion in the midterms.

Views of the Parties

Democrats’ strengths are clearly defined for suburban voters. While all voters are divided on some of the Democratic Party’s strong suits, only favoring them over Republicans by a few points on traits like working to find common ground with the other party, “shares your values” and thinking everyone should follow the same rules, suburban voters favor Democrats on these traits by a wide margin.

When asked which party most reflects a series of traits, suburban voters favor Democrats on working to find common ground with the other party by 18 points, being in touch with ordinary people by eight points, “shares your values” by six points, protecting individual rights by six points and thinking everyone should follow the same rules by five points. All voters favor Democrats on these traits as well, but by significantly narrower margins, suggesting that suburban voters are generally more positive toward the Democratic Party than the full electorate (and more sold on the Democrats’ strengths).

But the Democratic Party is not without flaws in the eyes of suburban voters. Suburban voters favor Republicans by 13 points on understanding the economy and jobs, while all voters favor Republicans on jobs and the economy by a similar 15 points. Suburban voters also choose Republicans as the party that represents hardworking people by six points. The fact that even with this more Democratic group, Democrats are underwater on the economy and on representing hardworking people should serve as a warning sign. Especially once Trump leaves office and the pandemic has abated, trailing in this key area by a wide margin could come back to bite them. 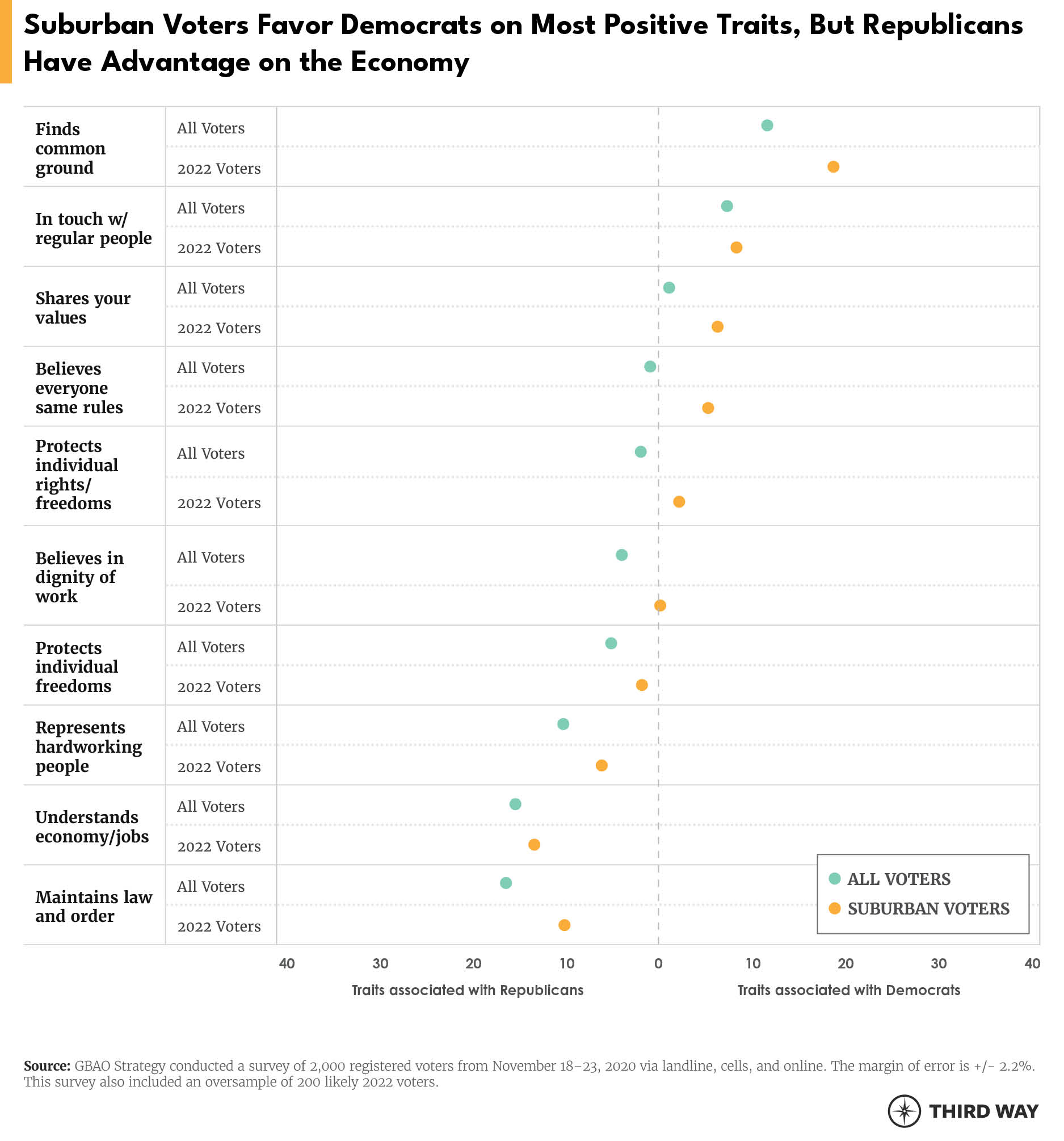 On their issue priorities, suburban voters’ top issues are clear and, in many ways, unsurprising. Getting the pandemic under control is suburban voters’ very top issue for Biden to take on in 2021, with a mean rating of 8.4 on a 0–10 scale, followed by pandemic economic relief with a score of 8.2 and lowering health care costs, with a score of 7.7.

The distinction between getting the pandemic under control and the other top issues comes into even sharper relief when looking at issues that suburban voters say will improve their personal situations the most. Getting the pandemic under control is again the top score here, with an average rating of 7.9. Health care costs and pandemic economic relief follow with significantly lower scores of 6.7 and 6.2, respectively. Although the suburbs are economically diverse, this divide speaks to a certain amount of privilege compared with urban and rural voters. Many suburban voters recognize the urgent need for pandemic economic relief and lowering health care costs, but when it comes to their own personal lives, the end of the public health threats from the pandemic and the restrictions that come with those threats will have a greater impact. Their preferences for Biden’s priorities reflect that difference. 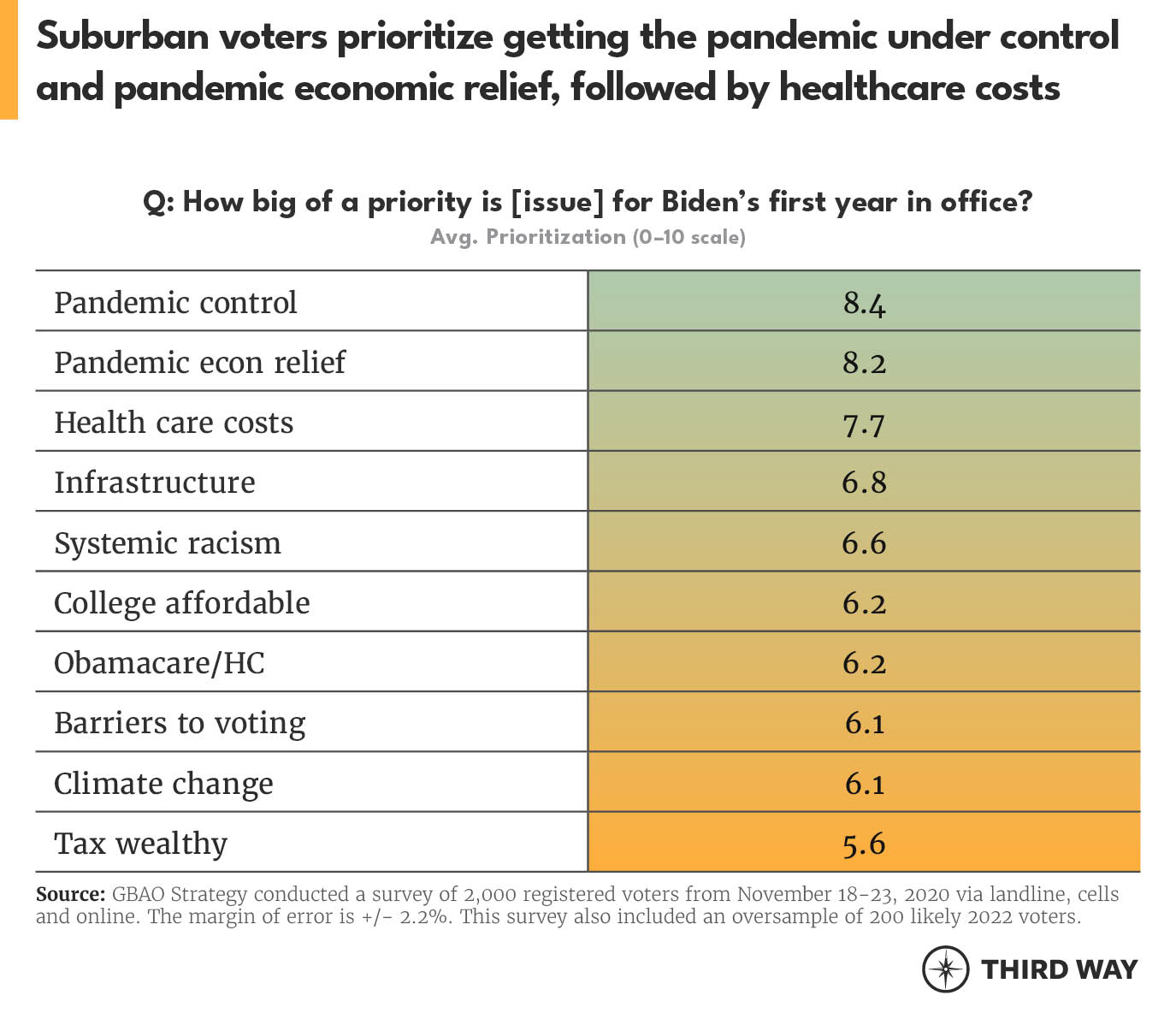 Suburban voters are clear on their top priorities, which serves as an advantage for Biden and Democrats. By getting the pandemic under control, providing economic relief from the pandemic, and working to lower health care costs, Democrats can ensure that this key voting bloc will remain aligned with them into the next election cycle. But there are warning signs for Democrats with suburban voters as well. Democrats’ weakness on the economy with suburban voters should not be dismissed just because they are currently in a position of strength with these voters. This weakness could come back to hurt Democrats and destabilize their support with this key part of their coalition if it goes unaddressed before the midterms.