Americans of all political persuasions, including an overwhelming majority of Democrats and growing numbers of Republicans, are looking to the federal government to take action that will address climate change and spur clean energy industries that could employ millions of American workers. Democratic primary candidates have offered what might seem to many like a bewildering array of ideas to eliminate climate pollution. Behind the flurry of position papers and websites, there is a remarkable amount of alignment among most, if not all, of the candidates, including:

We took a deeper look at where each one stands with key climate policies for the power, transportation, and industrial sectors (which produce nearly three-quarters of US emissions), as well as economy-wide policies. The tables below highlight where the candidates agree, and where there are interesting and important differences in the candidates’ proposals. This analysis also reveals gaps in some plans that campaigns should consider filling--either with new policies or by embracing smart ideas from other candidates.

We only included candidates who have released a climate plan and are polling at or above 1%. We also included the climate platform from Jay Inslee’s presidential campaign, which is regarded by many climate policy analysts as the gold standard. We based our policy comparisons on what candidates published in their detailed climate plans; when additional or clarifying information was needed, we relied on comments from candidates as reported by the press. For more details on candidates’ positions as listed in our tracker, or to read their plans in full, click here.

A checkmark indicates if a candidate included a relevant policy in their published climate proposal, a dash if it was left out, a question mark if it’s complicated, and an “X” if the candidate has come out against the idea in their proposal or in press. Listing a policy in this tracker does not indicate an endorsement by Third Way. However, we have included brief analysis for each section to provide context on certain policy issues. If you’ve got a hot take of your own, feel free to tweet any of these tables out below. 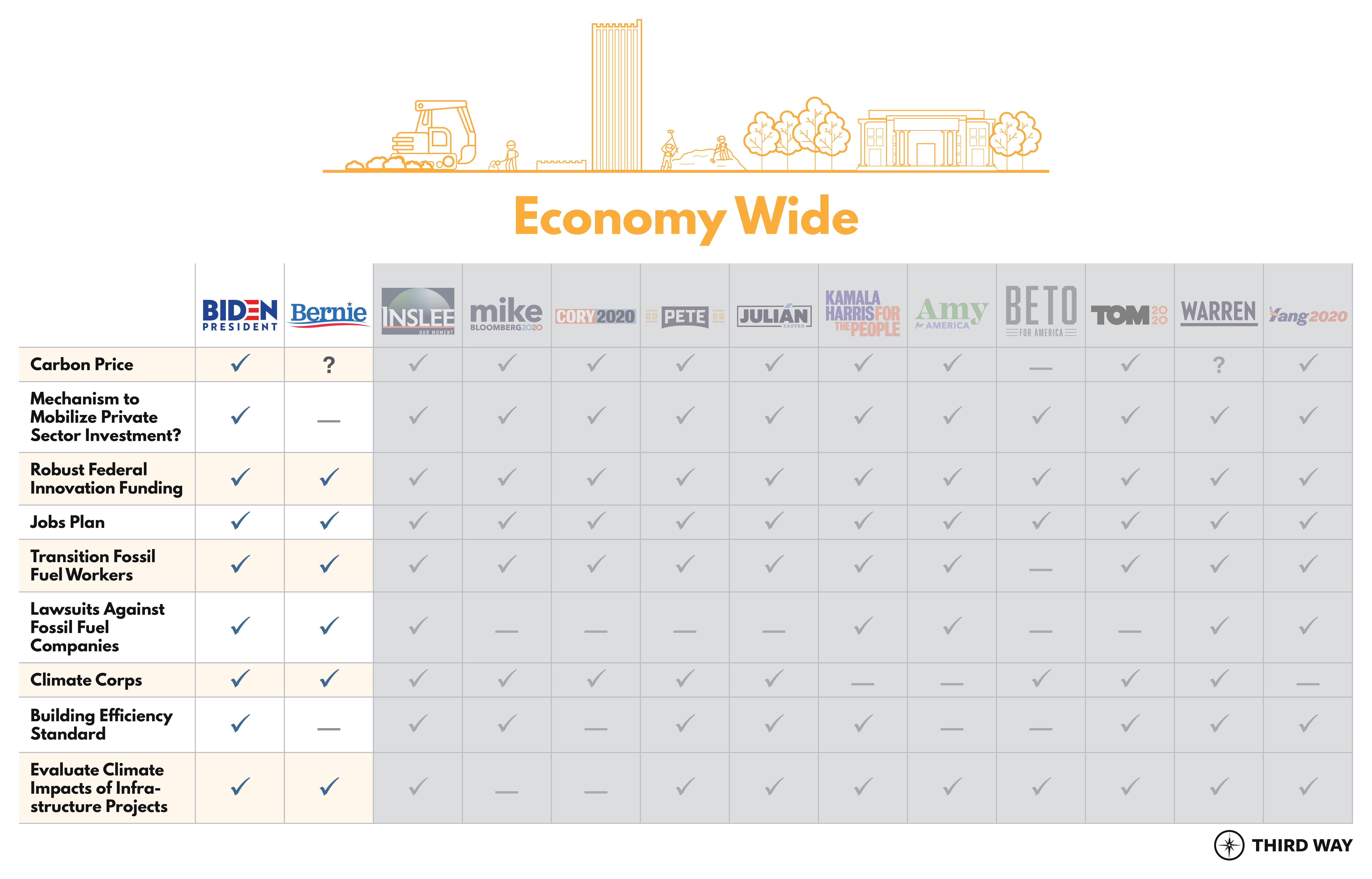 The campaigns are responding to an emerging enormous global clean energy market for technologies, products, and services that can reduce or eliminate climate emissions. This includes a focus on preparing the American workforce for clean energy jobs, mobilizing investment, sustainable and resilient infrastructure projects, and accelerating clean energy innovation. Interestingly, while media coverage often equates climate action with putting a price on carbon, some leading campaigns appear lukewarm to a carbon price.

There is also across-the-board support for federal innovation funding. This is an important recognition that we don’t have all the clean energy technologies we will need, or they are still too expensive to sufficiently reduce our reliance on fossil fuels  Equally important, however, is that these innovation plans are part of a broader set of policies that would drive demand, build more infrastructure, and create the kind of markets that are necessary to pull clean energy technologies out of the labs and enable them to compete against existing, polluting technologies. 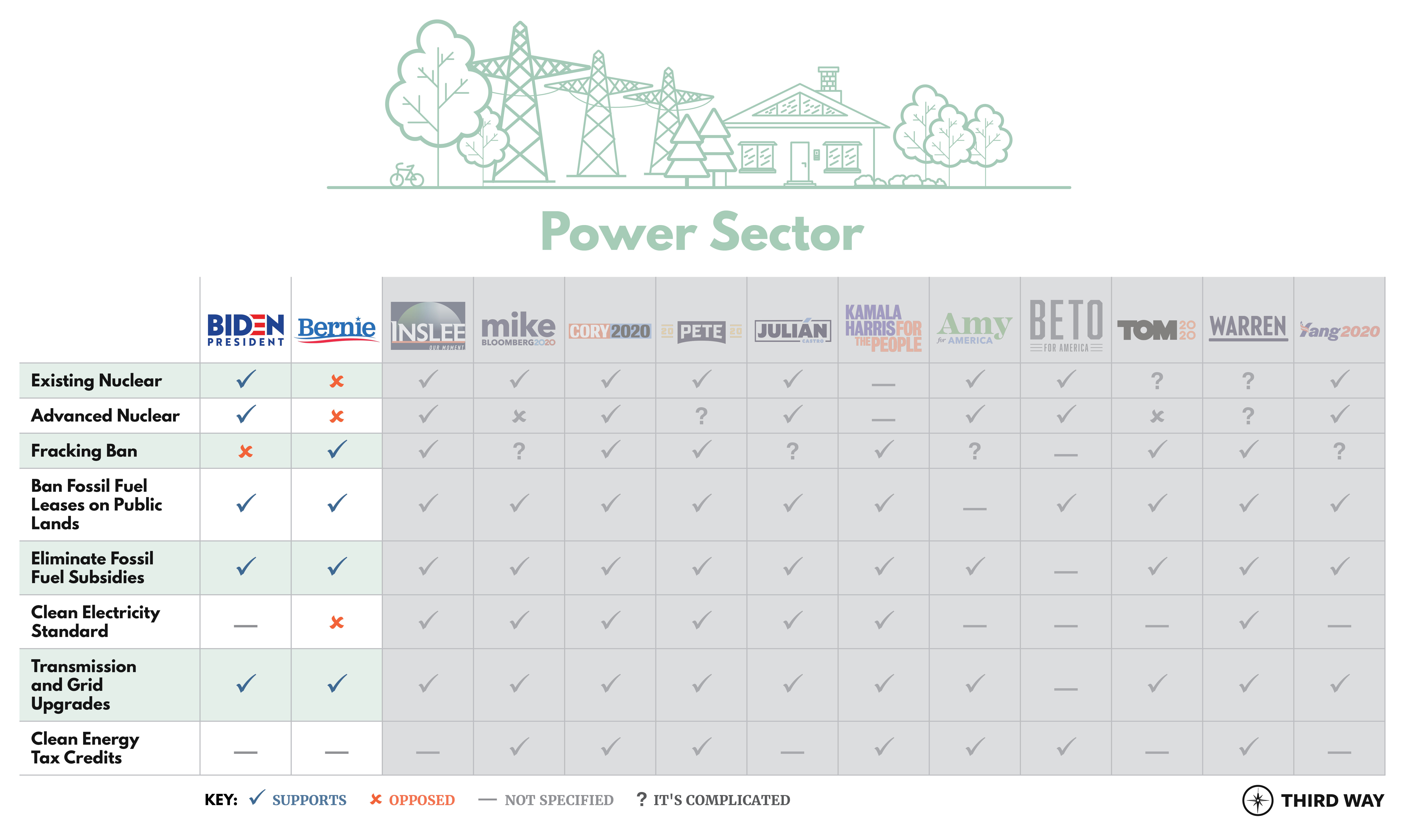 The candidates' differences are most stark in the power sector. The biggest point of contention centers on whether the United States should use every zero-carbon technology that can help us rapidly and affordably eliminate climate pollution. This includes supporting technologies like nuclear energy, by keeping existing plants open and investing in advanced nuclear, as well as carbon capture. We support a national clean electricity standard, which leaves the door open to all clean energy technologies in order to eliminate carbon pollution from the power sector. Many states have already successfully implemented clean electricity standards in order to achieve the fastest, fairest path to zero.

Using hydraulic fracturing for natural gas is also a point of contention among the candidates—rightfully so, as it’s a complicated topic. Few of them include fracking in their published plans. Much of our data on the issue came from meandering and awkwardly-complicated comments made to the press or at public events (best to read the details in our appendix). Low natural gas prices have accelerated the retirement of coal and been a boon for some domestic manufacturing. But it still contributes to climate change, especially if methane leakage from natural gas infrastructure turns out to be higher than previously anticipated. 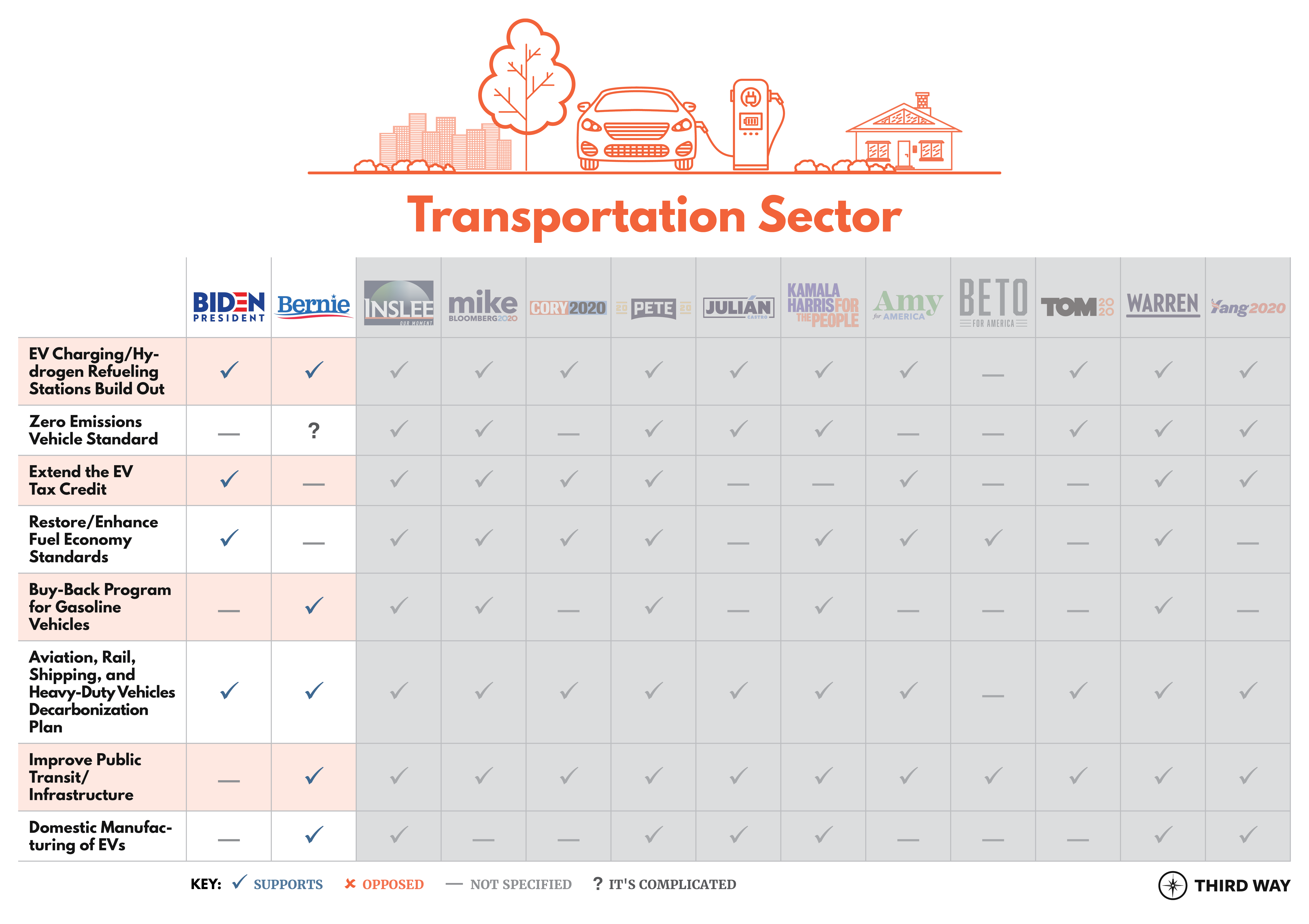 The transportation sector is the biggest source of carbon pollution in the U.S., with light-duty vehicles being responsible for 59% of the sector’s emissions. It makes a lot of sense for Democratic candidates to focus  on getting more electric vehicles (EVs) onto the streets. EV sales are expected to grow in coming years, moving the auto-industry away from gasoline vehicles, but there is much more the federal government must do to ensure this transition is successful. To do this, almost all of the candidates  included incentivizes to make both new and previously-owned EVs more affordable for most drivers , and build out charging infrastructure. There’s an opportunity to do more by encouraging the domestic manufacturing of both electric vehicles and the battery packs that power them. This could include low-cost government loans to retool existing factories, and grants or loans for battery manufacturing plants to make sure this industry—and the jobs that come with it—takes off in the US.

It is somewhat  surprising given the focus on EVs, that half of the leading candidates do not include a zero emissions vehicle (ZEV) standard. An ambitious ZEV standard coupled with innovation and buy-back policies are essential components for decarbonizing the light-duty vehicle fleet. We’ve already seen success with ZEV policies on the state level, notably with California’s ZEV standard resulting in a whopping 200,000 EVs on the road to date.

Unfortunately, industry was the least covered sector by the candidates. The industrial sector is one of the nation’s largest sources of emissions and was the greatest contributor to US emissions growth in 2018. And while other sectors are expected to remain level or reduce their climate pollution, industrial emissions are predicted to grow by 23% through 2050. Energy efficiency and switching to cleaner fuels will play a large role in decarbonizing the sector. Increasing demand for clean or low-carbon materials through a “Buy Clean” federal procurement  policy and industry-specific innovation programs will also play an important role, and have been embraced by most of the candidates. As these policies are implemented, American industries will also need trade protections so that companies that make investments to reduce or eliminate carbon pollution do not find themselves at a disadvantage against foreign producers that are cutting corners by continuing to use dirtier processes and fuels.

Two challenges stand out, however, in the review of policies on industry. First,there are certain processes that require sustained high heat that cannot easily be replaced with renewables, as well as emissions from chemical reactions that are created regardless of what the energy source is. That’s why investing in carbon capture technologies for industrial processes is a must—and why it should raise eyebrows that any of the candidates opposes carbon capture. Second, it is disappointing that (same as in the transportation sector) most candidates do not include industry-specific performance standards. Efficiency and emissions productivity standards for each industrial sub-sector can target unique and difficult-to-tackle emissions. These sub-sectors will also need significant grants, loans, and other financing tools to demonstrate new technologies and upgrade to low-carbon infrastructure while staying economically competitive.

Each Democrat running for president has offered her or his own plan to transition the US to a thriving, carbon-free economy. The candidates understandably are working to distinguish themselves from the pack. But the good news from our analysis is that there is a remarkable degree of agreement on what our nation’s destination should be, and no shortage of policy options that the eventual nominee can use to get us there.