What the 2020 Election Told Us About Young Voters

Young voters typically have the lowest voter turnout of any age group, but 2020 represented a sea change in their activism and civic engagement. In 2016, the Census Bureau estimated that 46% of those aged 18-29 voted compared to 70% of those aged 70+. However, for 2020, Tufts estimates that 52-55% of those aged 18-29 turned out to vote, with the large majority supporting Joe Biden and Kamala Harris. Because of the key role young voters play in electing Democrats now and in the future, it is of vital importance to understand what they care about and what they’re looking for from their leaders.

Third Way and GBAO Strategies conducted a post-election poll of 2,000 registered voters in November 2020 to understand voters’ perceptions of the Democratic and Republican parties and their policy priorities. We dug into the data on young voters in the survey to help elucidate their interests and priorities for the next four years.

In terms of their partisan preference, 60% of young voters (ages 18-34) in the survey voted for Biden in 2020. And on the surface, young voters look similar to all voters in their policy preferences. Like all voters in the survey, young voters’ top priorities for the Biden administration are pandemic economic relief, getting the pandemic under control, and lowering health care costs. However, young voters put greater emphasis on dealing with systemic racism, college affordability, and climate change than the overall electorate. And younger Democrats (ages 18-49) also diverge from older Democrats in that they are less favorable toward institutional figures in the Democratic Party. Because young voters are more skeptical of our political processes and elected leaders, Democrats should recognize that the status quo (especially in the face of a pandemic) will not be sufficient to continue engaging young voters in large numbers. That means working to get the pandemic under control and lower healthcare costs, but it also means speaking to those issues that young voters particularly care about. These issues often get secondary importance in politics, but with young voters’ advocacy, they may finally get the attention they deserve. 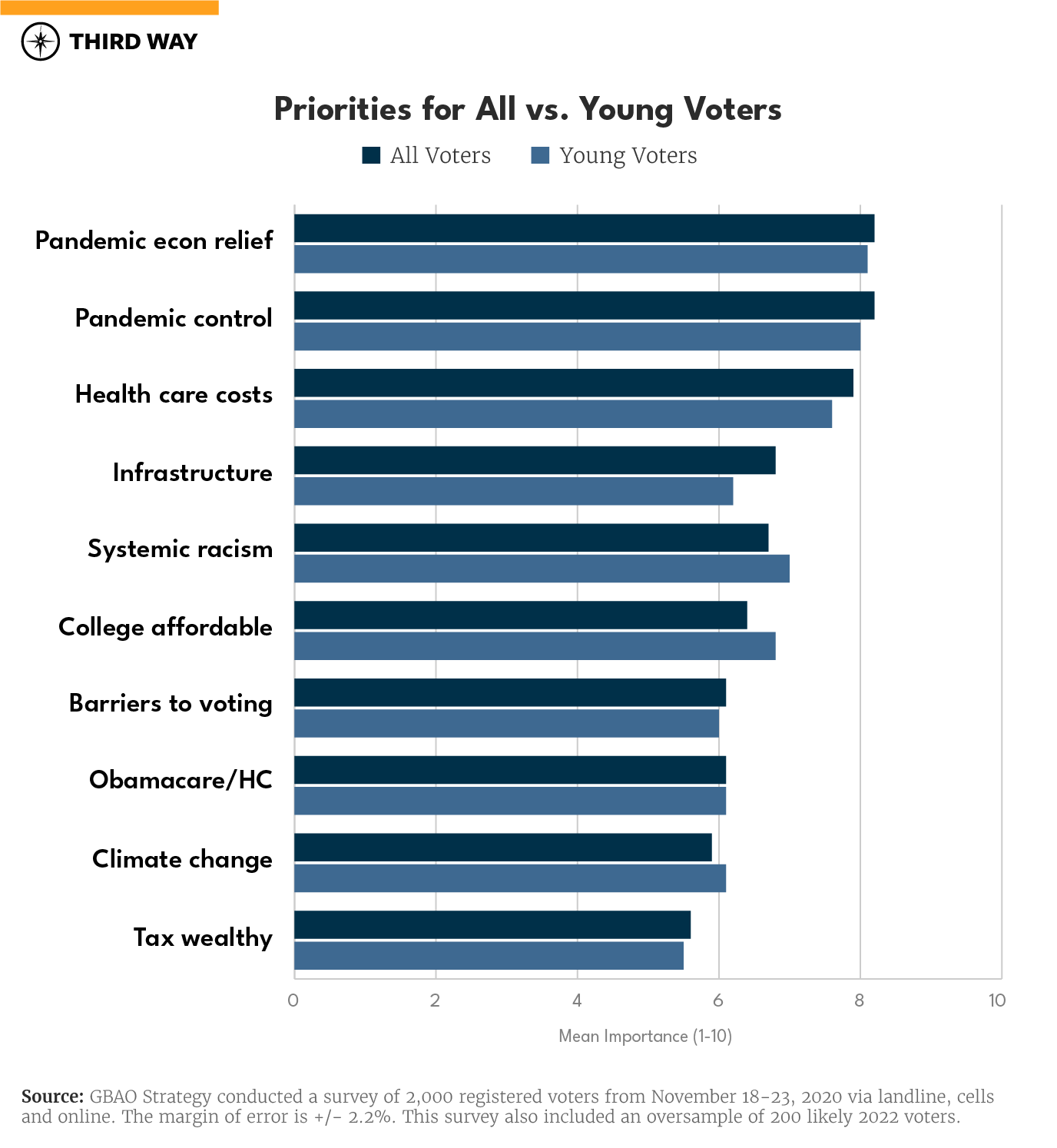 Our survey asked about voters’ policy priorities in two different ways, first asking what voters want the Biden administration to prioritize and then asking what policy changes would benefit them personally. While young voters gave most issues somewhat lower average ratings than the overall electorate, as mentioned above they gave higher priority to dealing systemic racism, college affordability and climate change. Yet this was despite giving these issues lower ratings for personal impact, suggesting that young voters may be particularly attentive to the plight of others and the world at large, rather than focusing solely on their own struggles. On their very top issues, young voters said that getting the pandemic under control and lowering healthcare costs would benefit them the most—but that the Biden administration’s first priority should be pandemic economic relief. 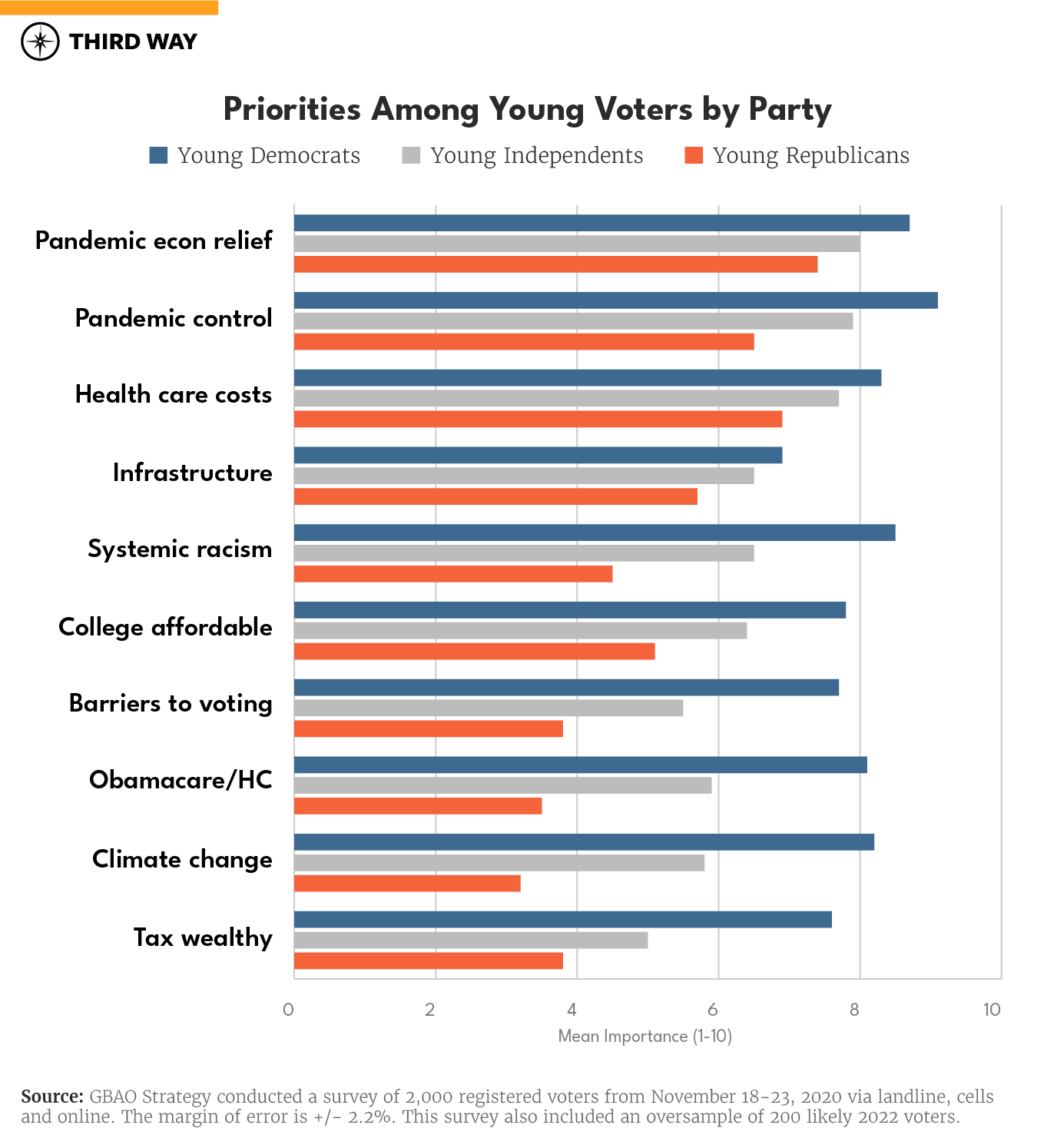 Looking at younger white, Latinx, and Black voters (each group aged 18-49), it seems that young people across races have similar priorities, with all groups giving high priority to pandemic economic relief, getting the pandemic under control, and healthcare costs. Seventy-two percent of the young voters in our sample were white, while 15% were Black and 13% were Latinx. Younger Black voters diverged in one key area, prioritizing systemic racism much more than younger white and Latinx voters. Young Black and Latinx voters also cared more about every issue than young white voters.

It is clear that the pandemic has overshadowed young voters’ other priorities, just as it has for all voters. But it is also clear that climate change, college affordability, and dealing with systemic racism are particularly salient issues for young voters. Democrats can communicate their commitment to young voters’ priorities by speaking to and working to address these issues. They may even be able to bring new voters on board by appealing to young Independents who also care about these issues. To continue winning elections, Democrats need to appeal to young voters by proposing policies and solutions to the issues they care about, and then following through on those proposals. Young voters want to see sincerity and real change from their politicians, and Democrats ignore their top priorities at their own risk.