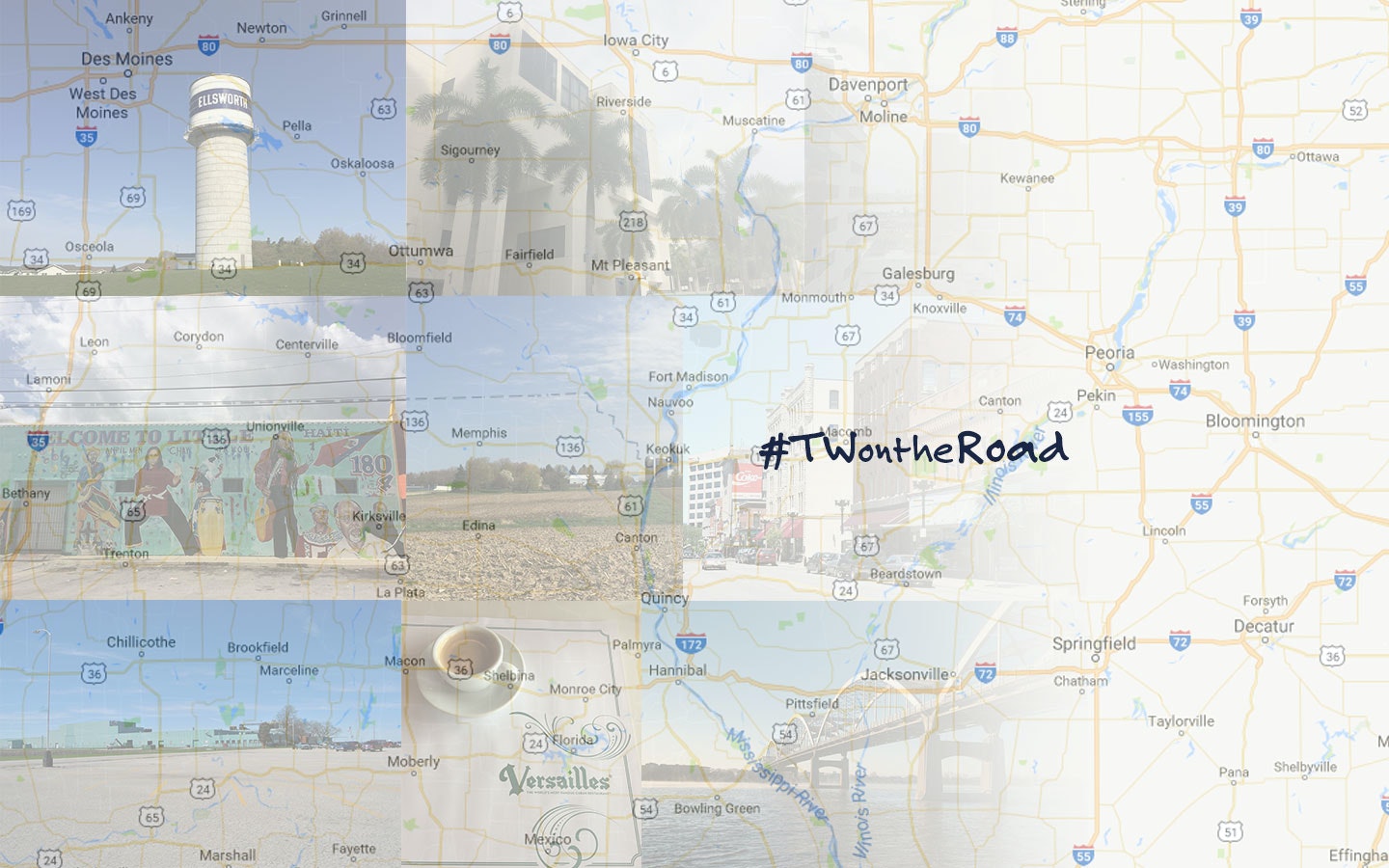 (If you read about this report in The Atlantic, you'll know we dispute their characterization of our work. We've published a response here.)

The monolith of “Middle America” doesn’t exist. “Middle America,” such as it is, is an incredibly diverse place. It varies from state to state, town to town, block to block. This report is as close as we could get to a snapshot of one place: the third Congressional District of Wisconsin.

WI-3 was the second stop on Third Way’s listening tour, after Illinois’ 17th District. On the surface, these two places appear similar. But the story here is much different than what we heard in IL-17, as well as the stories told in the books and journalistic accounts of the post-election Midwest. WI-3’s story is not one of industrial decay or a citizenry voting strictly out of anger, but one of an intense work ethic that binds the community together and helps it adapt to change.

Everyone we talked to, ranging in age from late 20’s to late 70’s, from students to farmers to union members, and across all political persuasions, referenced an inviolable belief in the value of hard work. It is their North Star, guiding their sense of what is right and wrong, inside and outside of WI-3.

It is the driving force behind an economic and cultural revitalization, but it also colors the way that people perceive government assistance—and the corresponding bafflement about why there are so many open jobs and no one to take them. And for many of the Wisconsinites we spoke to, no amount of hard work can overcome one of their biggest frustrations: laggard government and partisan squabbling.

But first, let’s back up to the big picture. WI-3’s 13,500 square miles snake north-south along the Mississippi River and reach into the middle of the state. It envelopes a mix of rural and suburban communities, with two micro-urban centers that are home to the University of Wisconsin campuses at La Crosse and Eau Claire.

As a one man told us,

[The district] is close enough to enjoy the amenities of the cities, but far enough to not have to deal with the bullshit.

The population, totaling 670,000, is ethnically and religiously homogenous: 96% are white and most are Christian. The line between the haves and the have-nots can be hard to distinguish in here, because it’s solidly middle class, with a median income of $51,219. Only twenty-five percent of its population has a college degree.

Politically, Wisconsin’s Third had a 25-year streak of voting Democratic in presidential elections. That lasted from 1992 to 2016. On November 9th, the district swung nearly 15 points in favor of Donald Trump. Meanwhile, WI-3’s Member of Congress, Democrat Ron Kind, won his eleventh term with healthy margins.

A Belief in Hard Work, For Better

But it wasn’t always this way. Its schools were strained under Governor Scott Walker’s budget cuts; its economy was challenged by the forces of automation and globalization.

Yet with a fierce work ethic and a no-nonsense attitude, the community has worked hard to make positive changes in all corners of WI-3, from bustling Eau Claire to the quietest farm towns.

“When I was a kid, I just wanted out. The opportunities we have now just didn’t exist,” said one man.

Now, there’s love, beauty, and a sense of opportunity…There’s been a rejuvenation of identity. Most of us couldn’t put our finger it, but something is happening that’s working.

One example of this locally driven change is the Eau Claire Music and Arts Festival, launched by Bon Ivers’ Justin Vernon and The National’s Aaron Dessner, both natives. The festival showcases local musicians, artists, and general Wisconsin-ness.

This little renaissance is also taking root in the local economy. More than two decades ago, the tire manufacturer Uniroyal—once a major employers providing about 1,000 well-paying jobs—closed its doors and left behind a shell of its factory. Eventually, people began to see opportunity in the 1.9 million square feet of unused concrete floor space. Today, it has more than 150 tenants, from tattoo artists to custom carpentry and from taekwondo to cello lessons.

Diversification of industry in this part of Wisconsin is a point of pride. Technology and automation don’t seem to scare people here, because there’s a big demand for skilled workers. “I’m optimistic about robots. It’s shifting jobs, not eliminating them…overall, it’s a plus,” said one resident. “It creates a better quality of life so people can work longer and stay healthier.” 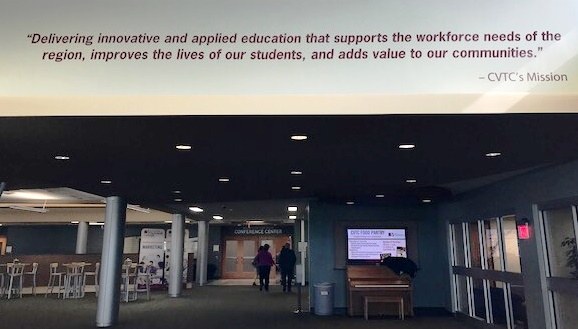 This attitude of adaptability is also reflected in the education system. “Crisis is great,” one instructor at a Chippewa Community College told us. “It’s a blessing that leads to opportunities.”

The college provides vocational and academic education to around 20,000 students in the region. Students we talked to were in programs for welding, accounting, radiologic technology, and information systems. Classes begin at around $140 per credit hour. Graduates enter a workforce that, many of the business leaders in the area say, will be ready to employ them.

“There are five jobs for every grad. We can’t supply enough of them,” that same instructor said.

But this supply problem encompasses one of the major challenges facing WI-3. The corollary to plentiful job opportunities has to be a workforce that’s willing to work hard. But people seem to believe that their sacred work ethic is not distributed among all WI-3 residents. Over and over again, we heard there are more jobs than people willing to work them.

"You could own the world if you work hard and have common sense and put down the cell phone. There are good jobs available and they can’t fill them,” one man said.

Another man told us job opportunity “depends on how bad people want to work. Some people give up too early. Sometimes you need to start at the bottom and work up, but people expect to start at the top.”

“People are lacking fire in their belly. When I graduated, it was understood that I wouldn’t move back home or live in a friend’s basement. I was a dishwasher so I could pay rent,” another man said.

But some tell another story. Many feel that no matter how hard you work, pay in the area is not enough to cover expensive higher education. As one Eau Claire mother said,

[Young people] are scared to take a chance in school. If they fail and change their major, that’s a big investment. The invisible pressure to succeed creates fear and anxiety.

This was echoed by another mother. “The way people define success is warped…The American Dream is lost,” she said. “My son is going to graduate with $60K of debt and maybe, maybe he’ll get a good job.”

What’s more, the costs of health care and living are rising faster than wages in WI-3. For employers, this means increased costs that equate to a pay-raise of approximately $2 to $3 dollars per hour for each worker. For workers, rising costs threatens quality of life and the bedrock promise that hard work will pay off.

“Am I going to be able to live here as I get older, be comfortable, and enjoy the benefits of the city?” asked one woman. “One hospitalization could knock me out. It’s a crappy thing that you work your whole life, when one thing can be devastating to your life.”

Additionally, many expressed a belief that government hand-outs, however well-intended, diminish the work ethic they prize so dearly.

A farmer told us that there is “a jealousy for success. The government makes it hard for people to achieve it...People are stuck in the system. They don’t work. They just get [assistance] from the government. But maybe we make it impossible for them to get out of the system.”

Similarly, another man said that welfare recipients “get in and stay on. Maybe we shouldn’t make it so hard to get out.”

“Just Get the Hell Out of My Way”

While many of the Wisconsinites we spoke with were invigorated by positive local changes, they felt hamstrung by government. They view federal and state government as anathema to their prized work ethic.

“The biggest detriment to expansion or creation of business is government,” said one man. “Government needs to be able to get the day-to-day business done. We send people to Washington and it’s a quagmire. I haven’t seen anything change.”

The idea that such bickering can be tolerated in D.C. is appalling to most. A minister lamented the fact that it’s become “socially acceptable to have non-civil discourse,” a feeling that many others share.

A cafe owner said, “Republicans, Democrats—it doesn’t matter. They don’t get anything done!”

Whether the question is about immigration or banks, taxes or welfare, the people we spoke to generally felt that government policies were irrelevant to their daily lives.

“As a businessman, I don’t need anything from the government. Just get the hell out of my way,” said a local business operator.

Another man pointed to an outdated Department of Education grant the school has received since 1985—even though everything, from the problems to the tools to solutions, have changed. “We’re using old solutions. We need new paradigms to solve new problems. We’re using old tools—we’re bringing chainsaws and a hammer to do surgery,” he said.

They expressed their frustration with the status quo at the voting booth. One man, who made clear he’s always been politically active, said that President Trump inspired an unprecedented activism among his employees.

“They all wanted to vote for Trump because he wasn’t a politician. Blue collar voters came out to stick it to the system,” he explained.

They hope something happens. It doesn’t matter if it’s good or bad, but something has to happen.

One person told us that, “Around here, some deals are still sealed with a handshake.” Hard work, community, and family—those are universal values in WI-3 and those are the values they see reflected in their local government.

Locals generally expressed a feeling that they were adapting to economic and social challenges due to the “the Midwest ‘don’t express emotions and work hard’ mentality”—not federal or state government. 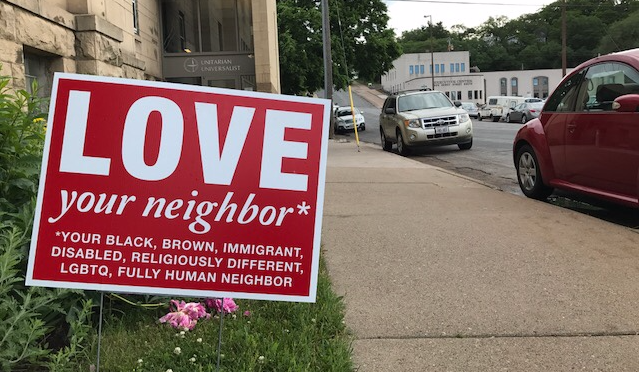 “We have gotten away from [partisanship]. We don’t agree on everything, but we get along,” said one man of his hometown.

“You suck it up, you work hard, and take care of your neighbors,” said one woman.

The positive changes occurring in WI-3, they believe, is evidence that people can in fact put differences aside to work together.

“The last election was really nasty, but on a local level where you know people, it goes away. We come together on projects and solve problems together,” said one man to nods of agreement around the table.

“Big government can learn a lot from small government,” said another.