The American energy sector has experienced enormous technological innovation over the past decade in everything from renewables (solar and wind power), to extraction (hydraulic fracturing), to storage (advanced batteries), to consumer efficiency (advanced thermostats).

What has gone largely unnoticed is that nuclear power is poised to join the innovation list.

A new generation of engineers, entrepreneurs and investors are working to commercialize innovative and advanced nuclear reactors.

This is being driven by a sobering reality—the need to add enough electricity to get power to the 1.3 billion people around the world who don’t have it while making deep cuts in carbon emissions to effectively combat climate change.

Third Way has found that there are nearly 50 companies, backed by more than $1.3 billion in private capital, developing plans for new nuclear plants in the U.S. and Canada. The mix includes startups and big-name investors like Bill Gates, all placing bets on a nuclear comeback, hoping to get the technology in position to win in an increasingly carbon-constrained world.

This report introduces you to the advanced nuclear industry in North America. It includes the most comprehensive set of details about who’s working on these reactor designs and where. We describe the money and momentum building behind advanced nuclear, and how the technology has evolved since the Golden Age of Nuclear.

To be clear, this is not your grandfather’s nuclear technology. While developers in some cases are working off of technology designs conceived in our national laboratories during the 1950s and 1960s, the advanced reactor technologies being developed are safer, more efficient and need a fraction of the footprint compared to the nearly 100 light water reactors (LWRs) that provide almost 20% of the U.S.’s electricity today (and 65% of its carbon-free power). New plants could be powered entirely with spent nuclear fuel sitting at plant sites across the country, built at a lower cost than LWRs and shut down more easily in an emergency.

The need for nuclear power has never been clearer. To stem climate change, the world needs 40% of electricity to come from zero-emissions sources, according to the International Energy Agency (IEA). While we can and must grow renewable energy generation, it alone will leave us far short of meeting that demand, the U.N. Intergovernmental Panel on Climate Change (IPCC) and the U.S. Environmental Protection Agency (EPA) have said. This is why the IPCC in November issued an urgent call for more non-emitting power, including the construction of more than 400 nuclear plants in the next 20 years. That would represent a near doubling of the 435 plants operating globally today.

Nuclear power is on the cusp of a comeback. The technology may be the best opportunity we have to address climate change and meet the world’s growing energy needs.

The energy sector has experienced enormous technological innovation over the past decade in everything from renewables (solar power), to extraction (hydraulic fracturing), to storage (advanced batteries), to consumer efficiency (advanced thermostats). What has gone less noticed is that nuclear power is poised to join the innovation list. Third Way original research has identified a new generation of engineers, entrepreneurs, and investors, along with several established nuclear companies, who are working to commercialize innovative and advanced nuclear reactors in North America. In total, we have found nearly 50 projects in companies and organizations working on small modular reactors based on the current light water reactor technology of today's reactors, advanced reactors using innovative fuels and alternative coolants like molten salt, high temperature gas, or liquid metal instead of high-pressure water, and even fusion reactors, to generate electricity.

These companies are being built and funded because the innovators and investors see profit in creating an answer to the global energy paradox – there are 1.3 billion people in the world without access to reliable electricity; they will get that electricity, and advanced nuclear can provide it to them while cutting global carbon emissions. Our table and map of the advanced nuclear industry in North America is the most comprehensive listing to date of who is working on these reactor designs. In compiling this list, four important trends became clear:

1. Coast to Coast: Research is not isolated to one state or even one coast. The companies and organizations leading the design revolution reach up and down both the East and West coasts of the United States and into Canada. In all, twenty different states host entities researching advanced nuclear energy.

2. One Size Doesn’t Fit All: In interviews Third Way conducted with many of the companies on this list, we found real diversity in size and structure, ranging from lone entrepreneurs, to venture capital supported university spin-offs, to large international corporations. Each is making strides and bringing a unique perspective to the industry.

4. Not Just Fission Anymore: Along with the evolution from large light water reactors to small modular light water reactors and beyond, Third Way has found major investment and interest in nuclear fusion from both small and large companies. Though this technology has much left to refine before commercialization, the growth has been staggering.

When thinking of the emerging advanced nuclear industry, it is important to understand how it compares to other sectors with a number of potentially new entrants. Let’s take the Internet. On the surface, there are similarities. As with the Internet today, the advanced nuclear space includes startups led by recent Ph.D. graduates, established Fortune 500 multinationals, and everything in between. And just like Internet companies, financing includes seed capital provided by angel investors, investments by established venture capital firms, and companies spending their own capital on significant R&D budgets.

The differences between the advanced nuclear companies and the companies spurring the latest Internet revolution are just as important. While the latest software or hardware improvement can take significant funding and research, the dollars and time required are a relative pittance in comparison to the funding necessary and regulation that must be navigated to design and build a new nuclear reactor. But despite these obstacles, nearly 50 companies and organizations are moving ahead, and a decade from now we may be seeing a brand new reactor revolutionizing the energy industry. 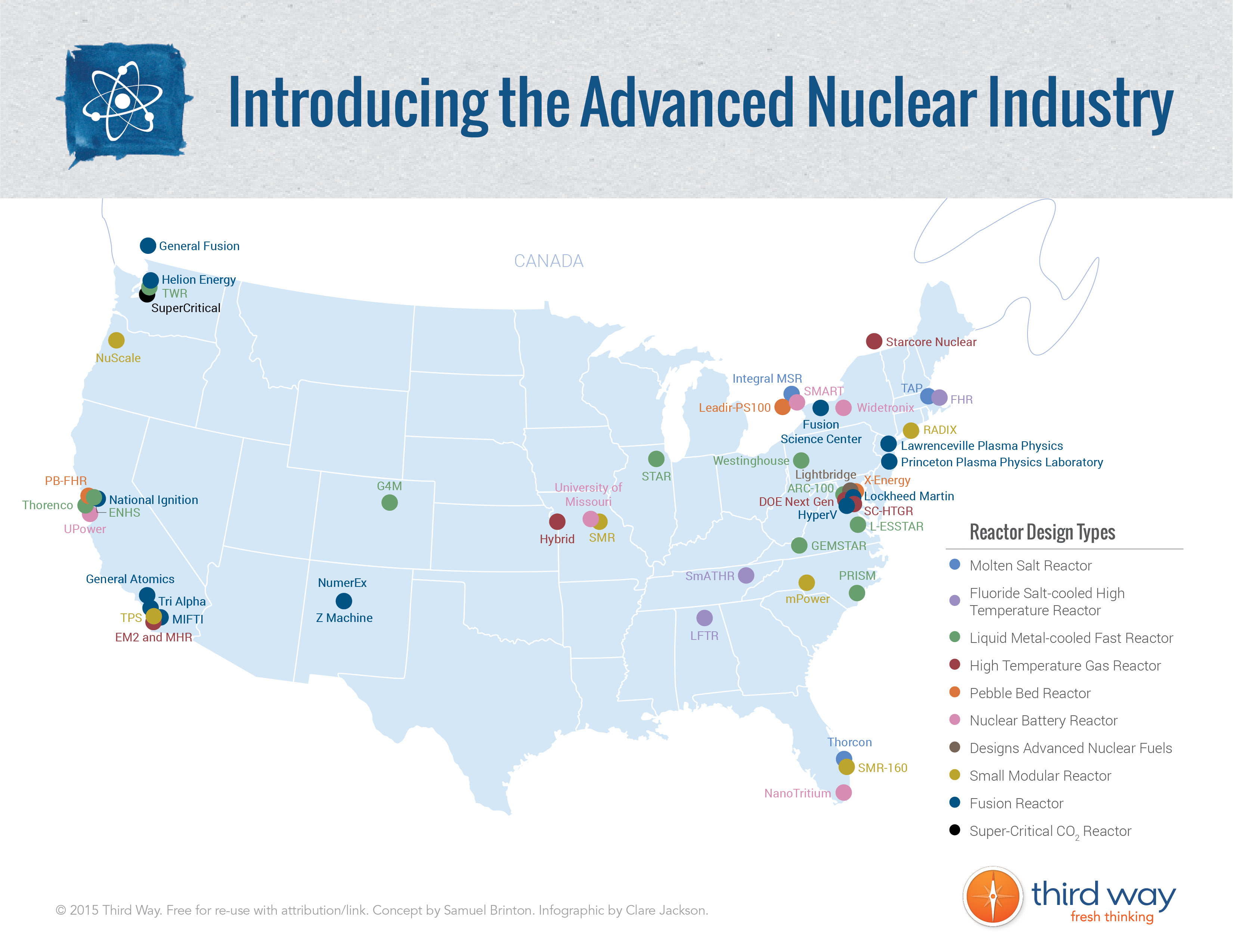 Small modular reactors (SMRs), defined by the International Atomic Energy Agency as anything less than 300 MWe (or less than one-fourth the size of a typical LWR), might hold the key to a transition toward advanced nuclear reactors. SMRs are about to begin the final stages of commercial development. With a lower initial capital investment and shorter construction timeline than LWRs, SMRs could replace aging and carbon-emitting coal power plants. The next generation of nuclear reactors hold even greater promise of addressing challenges faced by the nuclear industry including nuclear waste management, proliferation concerns, and costs of construction.

The SMRs based on light water reactors and advanced reactors can complement light water reactors by providing a broader range of applications. Both can provide a dependable electricity source to sparsely populated areas or regions unattached to a grid, and may be deployed easier and for less upfront cost. Similarly, both SMRs and advanced reactors can provide distributed generation of process heat to industrial sites, such as a desalination plant; enable grid independence at critical facilities such as military bases; and even deliver load following electrical production. 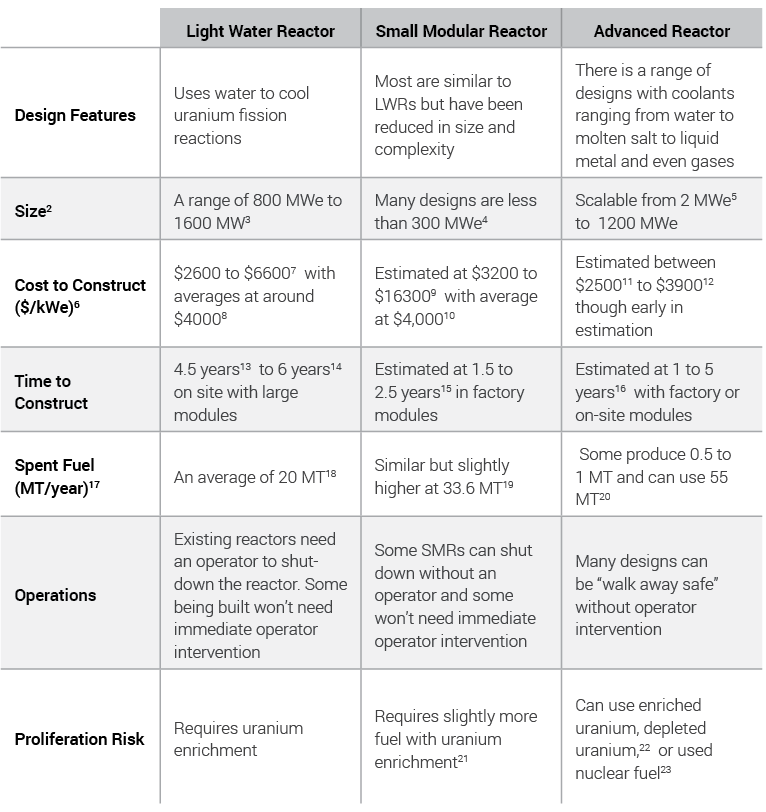 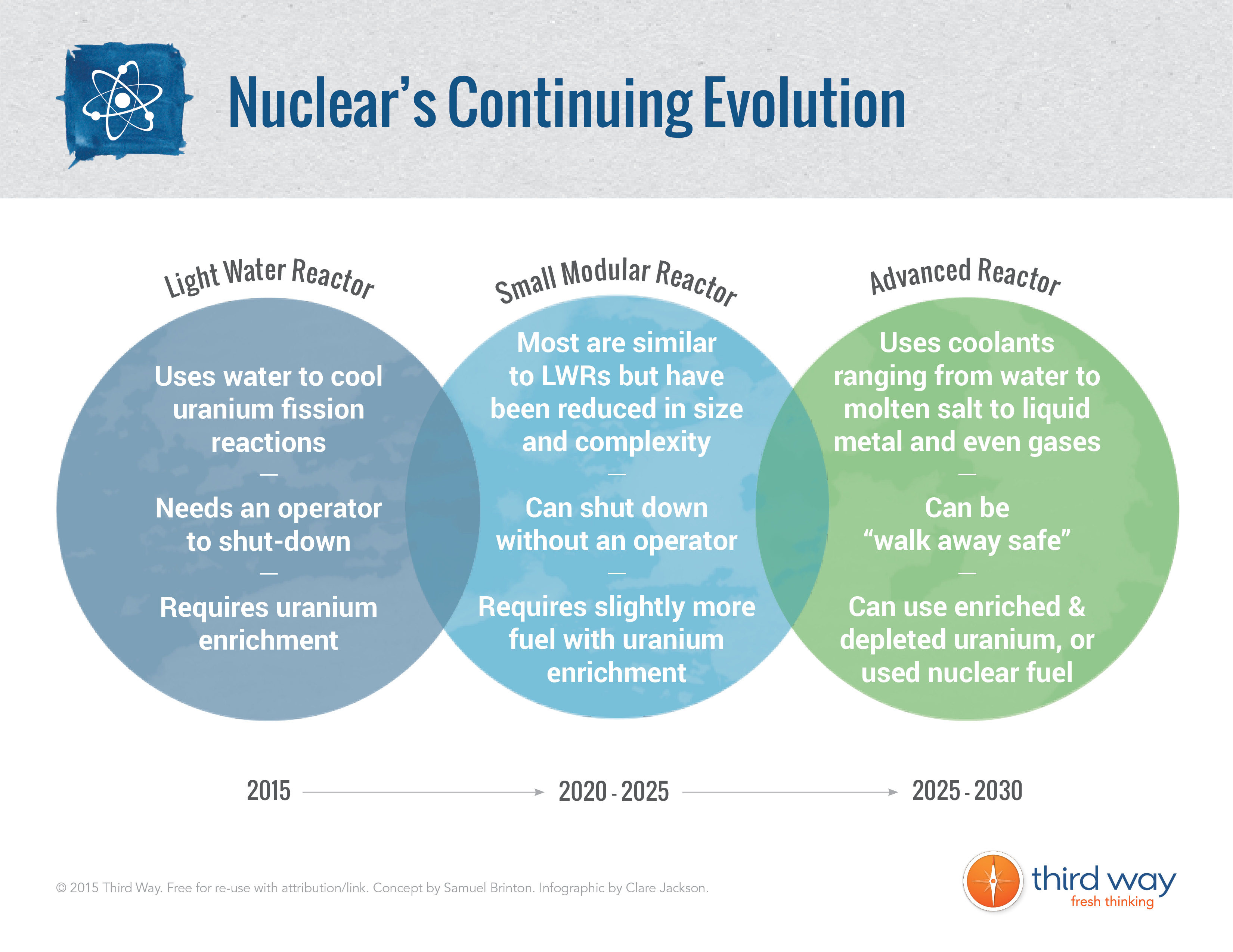 Our work is grounded in the mainstream American values of opportunity, freedom, and security. But we identify as center-left, because we see that space in U.S. politics as offering the only real path for advancing those ideals in the century ahead.

Our agenda is ambitious, aspirational, and actionable. It is built on the bedrock belief that for political movements to succeed in our political system, they must relentlessly re-imagine their policies, strategies, and coalitions.

We are fighting for opportunity, so everyone has the chance to earn a good life; progress on social issues, so all have the freedom to live the lives they choose; and security, so we are protected from 21st century global threats.

Our competitive advantage lies in our high-impact advocacy campaigns that combine rigorous policy research with a unique and incisive understanding of the vast American middle—the people who ultimately decide majorities and provide mandates for change. We design our work to persuade elected officials, intellectuals, advocates, the media, and others with political influence.

Third Way has rejected the ideological rigidity of the climate change debate, which pits climate deniers against those who believe renewables are the only answer. Under our Clean Energy Program, we have developed a campaign to ensure the U.S. leverages all of our energy resources as part of a climate solution, with a focus on commercializing advanced nuclear energy, cutting the carbon emissions from fossil fuels, and moving freight off American roads and onto our rails and waterways. More than a dozen of our proposals have been introduced as legislation or executive orders, and three have become law.

Throughout its existence, Third Way has been an advocate for the safe and reliable use of nuclear energy as a key tool to address the twin challenges of climate change and growing global electricity demand. From examining the technical benefits of small modular reactors to looking at how shutting down the current nuclear fleet would impact carbon emissions, we strongly believe it is critical that any national energy conversation includes nuclear power.