Josie Graham from San Francisco had to fight hard for her father’s care after he was diagnosed with cancer. She was frustrated by many barriers until one week before he died. That’s when he became eligible for hospice with no co-pays. She wrote, “the ease of accessing end-of-life care, services and medical equipment through a home hospice program felt like receiving a magical key that unlocked doors we had tried to break down for years.”1

Medicare has protected most older and disabled Americans from devastating health costs, but many beneficiaries fall through the cracks. Nearly 6 million Medicare beneficiaries with incomes of less than $23,000 spent about $5,000 or more on coverage and care in 2013-14 (the most recent survey available).2 That’s nearly a quarter of their income. And because protections from high costs vary by state, low-income beneficiaries in some areas spent one-third to one-half of their income on health care.3

We must do more to protect older and disabled Americans from high health care costs. Third Way has called for Congress to enact a cost cap that would limit premiums, deductibles, copayments, and other out-of-pocket costs for everyone based on their income—no matter where they get their insurance.4 This idea builds off the Affordable Care Act (ACA), where everyone buying their own coverage through the exchanges now has a cap on their premiums and out-of-pocket costs under the American Rescue Plan. This means they won’t pay more than a set amount on health care costs in a certain year, no matter what services they need.

As Congress works to extend the improved ACA cost cap through budget reconciliation, policymakers should also take the opportunity to cap costs for Medicare beneficiaries. Capping drugs costs in Medicare has received a lot of attention, but gaps in coverage for hospital and doctor costs also need to be addressed. Reps. Lisa Blunt Rochester (D-DE), Andy Kim (D-NJ), and Dwight Evans (D-PA) have proposed legislation for a comprehensive income-based cost cap for low-income seniors.5 It would make health care affordable for 6.4 million Medicare beneficiaries. This policy brief explores why that effort is so important by outlining the gaps in Medicare coverage and how a cost cap would address those problems.

The Problem: Gaps in Coverage under Medicare

Typically, Medicare pays for 73% of an individual’s health care costs without factoring in any other supplemental coverage (compared to 83-85% for typical employer plans).6 Because of that, most beneficiaries have some source of supplemental coverage, which could be a Medigap plan, a Medicare Advantage plan, a prescription drug plan, a low-income supplement known as the Medicare Savings Programs (MSP), or various combinations.

One of the gaps in protection is that Medicare doesn’t have an out-of-pocket limit on health care costs for low- to moderate-income beneficiaries.7 This gap affects individuals who are not eligible for MSP. Currently, MSP provides supplemental coverage for beneficiaries with incomes up to 135% of the federal poverty level. This supplement covers a beneficiary’s share of Medicare Part B premiums, which pays doctor bills. For beneficiaries living in poverty, it also covers out-of-pocket costs. Not only is the level to qualify for MSP very low (135% of the federal poverty level, which is $17,388), but too few people are enrolled (as shown in the chart below).8 Specifically, half or more of eligible beneficiaries are not enrolled or cannot enroll due to limits on enrollment slots. This results in a range of enrollment rates—from 29% of eligible participants in West Virginia to 78% of eligible participants in Maine.9 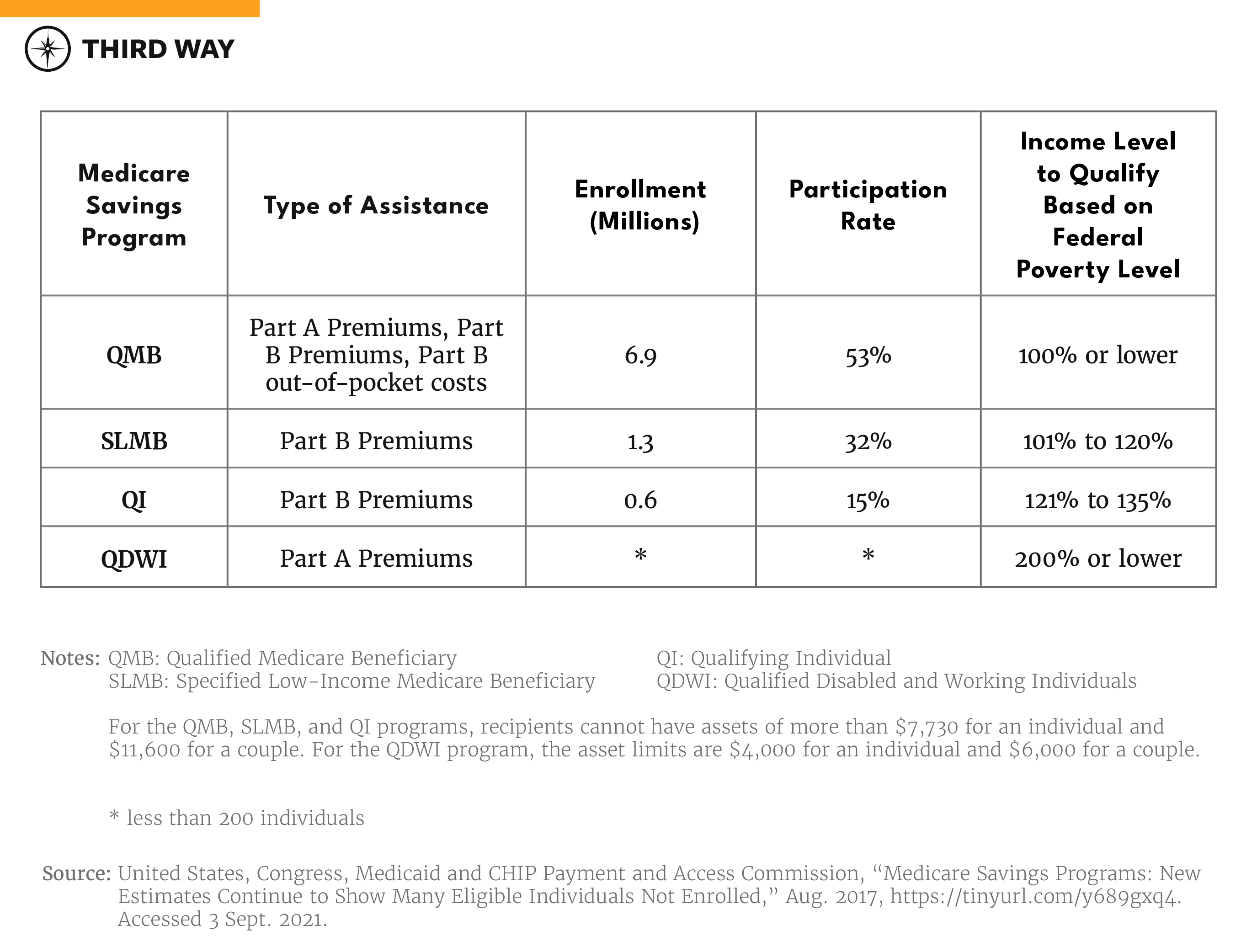 That gap in coverage has serious financial and health consequences for beneficiaries.

The Solution: A Cost Cap for Medicare

Medicare beneficiaries should have protection from high premiums and out-of-pocket costs based on their income. Current cost protections for Medicare beneficiaries, however, are either missing or inadequate. For example, a beneficiary with an income of $16,389 (which is 135% of the poverty level) must pay as much as 17% of their income on out-of-pocket expenses, depending on how much care they need during a year.19 In contrast, a beneficiary with a $48,500 income (400% of poverty) pays only 6%. The Blunt Rochester-Kim-Evans legislation would improve Medicare cost protections through the Medicare Savings Programs, which covers beneficiaries’ hospital and doctor costs under Medicare Parts A and B as shown in the chart below. MSP is administered by the states as part of Medicaid. 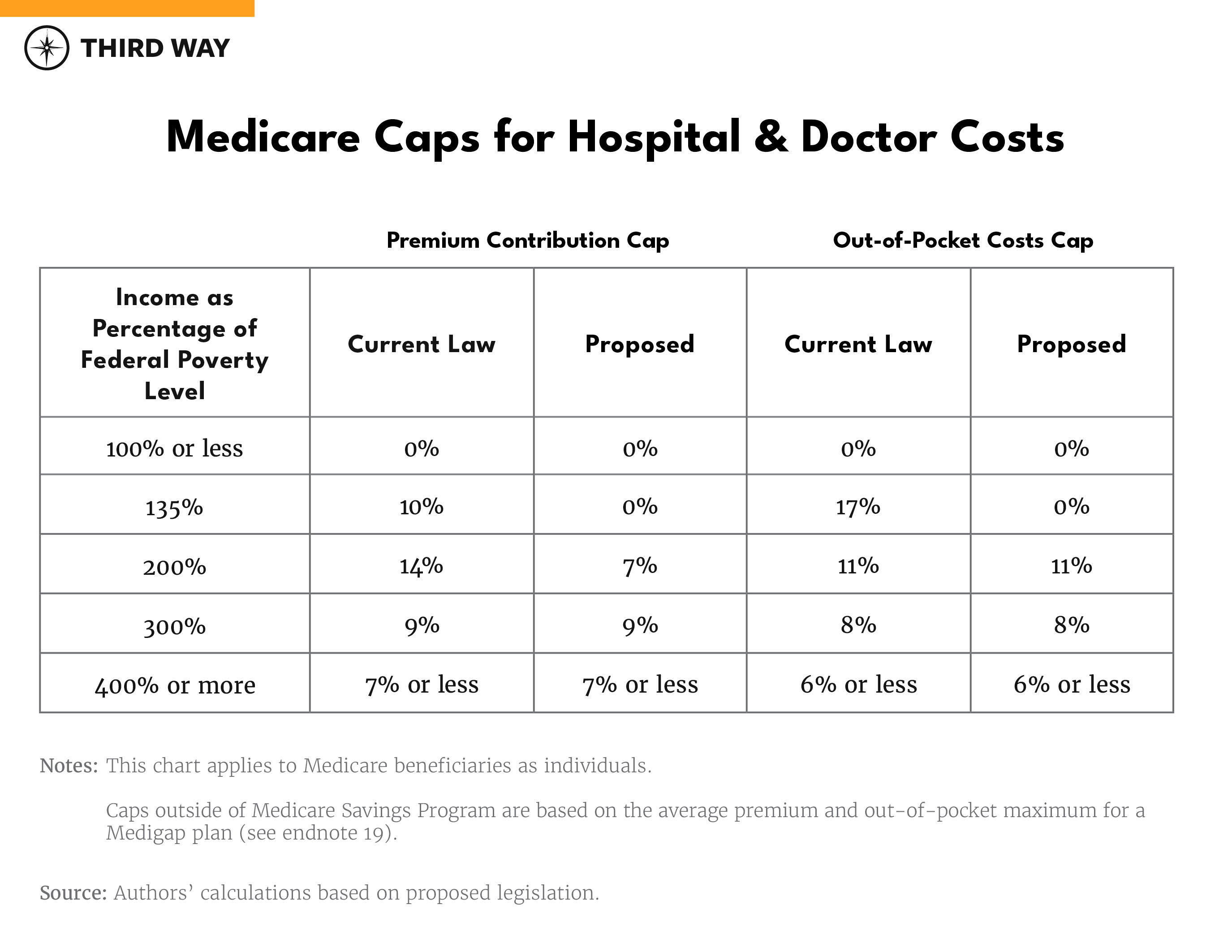 Specifically, the Blunt Rochester-Kim-Evans legislation would raise the Qualified Medicare Beneficiary eligibility from 100% to 135% of poverty as shown in the chart below. It would increase the Specified Low-Income Medicare Beneficiary eligibility from 120% to 200%. Beneficiaries above 200% of poverty would continue to use Medigap, Part D plans, and Medicare Advantage plans, which would be able to provide adequate cost caps with the addition of the provisions above. To increase participation rates, the proposal would provide grants to states for auto-enrollment under a program called Express Lane eligibility. 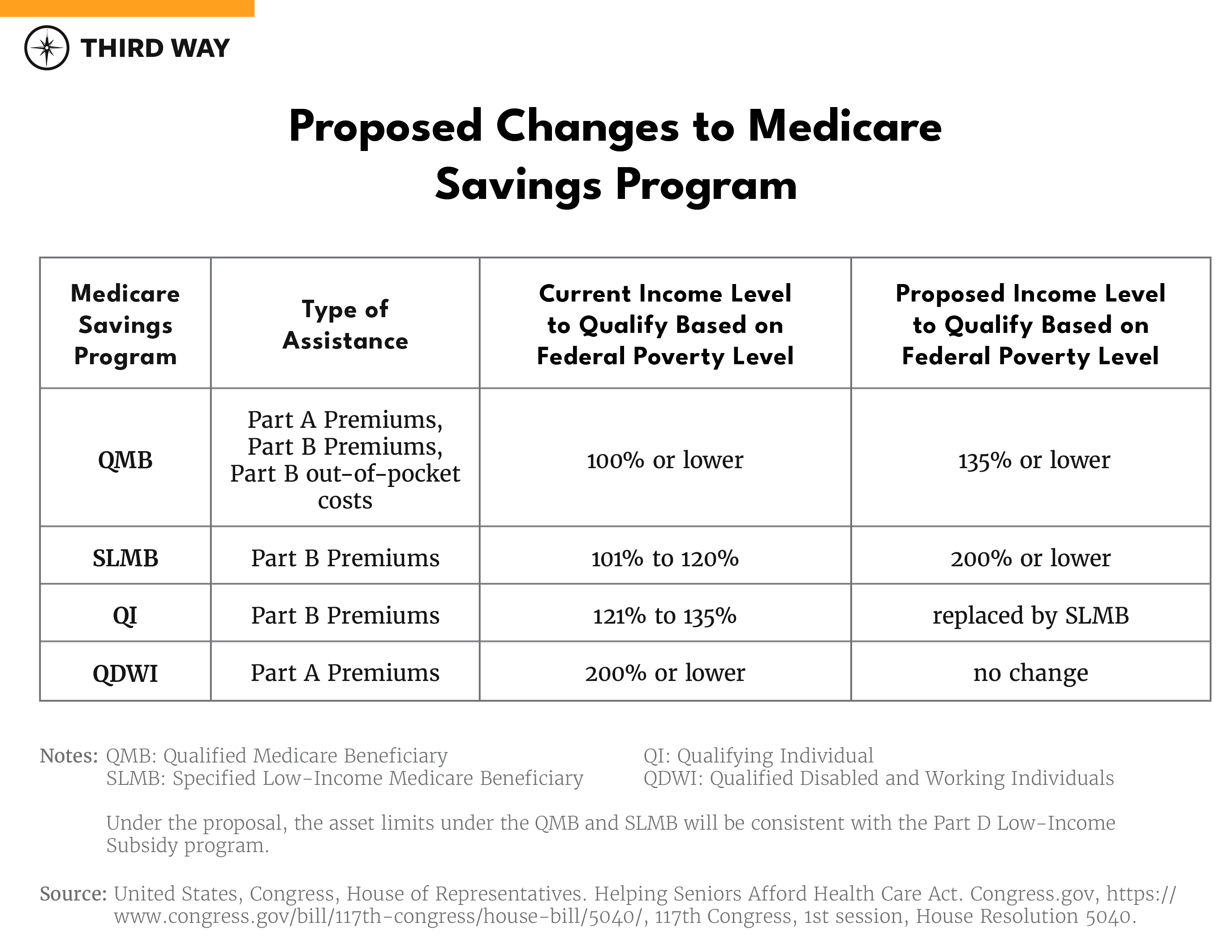 The second group are the 4.5 million seniors who weren’t previously eligible. The new provision raises the income eligibility from $17,388 (135% FPL) to $25,769 (200% FPL). This group would no longer have to pay a monthly premium for Medicare Part B.

The potential for increased MSP enrollment for each state is shown below.

Budget reconciliation provides an important opportunity to fill a big gap in protections for Medicare beneficiaries. The Blunt Rochester-Kim-Evans legislation fills that gap. It would bring the nation one step closer to everyone having access to affordable care through a cost cap.