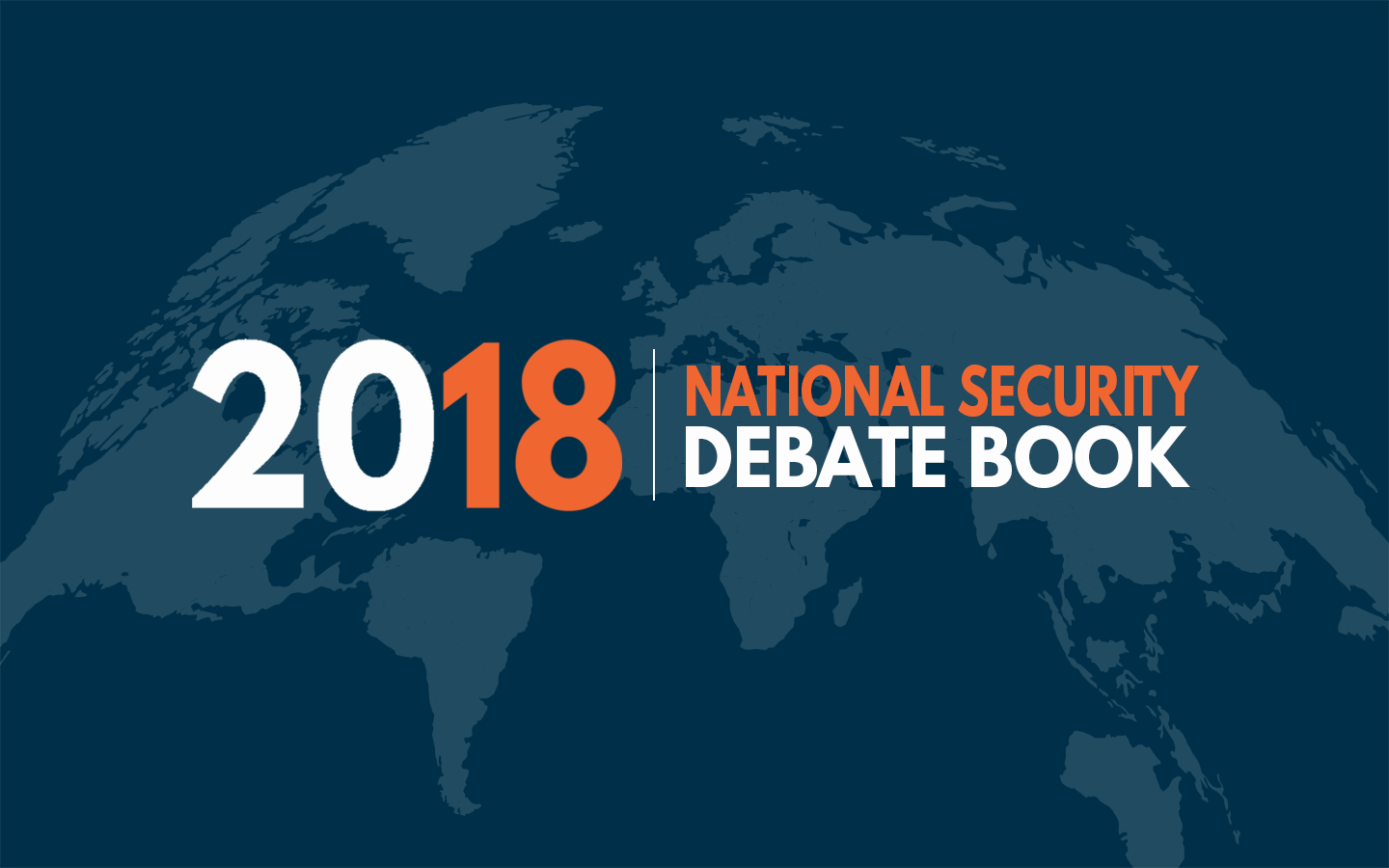 The United States entered Afghanistan after the 9/11 attacks to prevent the return of terrorist safe havens that can be used to launch attacks on the American homeland. But history and recent evidence shows the President’s military-only strategy is not working.

In 2017, President Trump announced a troop increase in Afghanistan, while allowing for the possibility of an open-ended war.  However, after 17 years, over 2,000 troops lost, and billions of US dollars spent on reconstruction, the Taliban controls more territory in Afghanistan, and terrorist attacks are on the rise.

Instead of only utilizing a military approach, the United States needs a comprehensive strategy to get the Afghans to secure their own country, strengthen their security forces, tackle corruption, and get their government functioning. Ultimately, a strengthened national government in Kabul and the Taliban must reach a political settlement to reduce the terror threat to the US

Afghanistan is also backsliding because the United States is losing support from our allies in the region. A safer Afghanistan is less likely if President Trump continually trashes NATO allies, fails to appoint ambassadors in the region, starves the State Department of resources to do its job, and fails to deal with the challenge of Pakistan.

The United States’ involvement in Afghanistan has a tumultuous history. In the 1980s, the United States backed insurgents against the Soviet occupation. Then in the 1990s after the Soviets’ withdrawal, the Taliban took power, bringing repressive rule and a safe-haven from which Al Qaeda planned and executed the 9/11 attacks. In response to those horrific attacks, the United States deployed troops to Afghanistan and successfully drove out Al Qaeda and the Taliban regime, eventually paving the way for elections.

But from 2002 to 2009, in the words of former Defense Secretary Robert Gates, “resources and senior level-attention were diverted from Afghanistan” to Iraq, interrupting US efforts to rebuild Afghanistan.1 It was not until the start of President Obama’s tenure in 2009 that the United States shifted its focus back to Afghanistan, sending an additional surge of 30,000 American troops to suppress the Taliban insurgency and stabilize the country.2 Civilian deaths in Afghanistan nevertheless increased after this period.3

In 2014, at the end of Afghan President Hamid Karzai’s tenure and after years of tense relations with his administration, the United States sought a political solution to a disputed election and helped broker a national unity government between President Ashraf Ghani and Chief Executive Abdullah Abdullah as a way to end months of political turmoil.  Ghani, a former Afghan Finance Minister with an American doctorate and decades of experience as an academic and World Bank staffer, was elected and continues to serve as president to this day. Abdullah Abdullah, who previously served as Afghanistan’s Foreign Minister, became Chief Executive. The parties did not include the Taliban, a fundamentalist group that continues fighting to this day.4

On January 1, 2015, NATO ground forces, including American troops, officially ended their combat mission in Afghanistan, replacing it with a train-and-advise mission. In November 2017, NATO Allies and partners decided to set the number of troops to 16,000 personnel in Afghanistan. As of early 2018, approximately 2,400 US personnel have been killed in Afghanistan.5 Since 2002, the United States Congress has appropriated or allocated more than $76 billion for various State Department and Pentagon programs to support the Afghan security forces.[6] 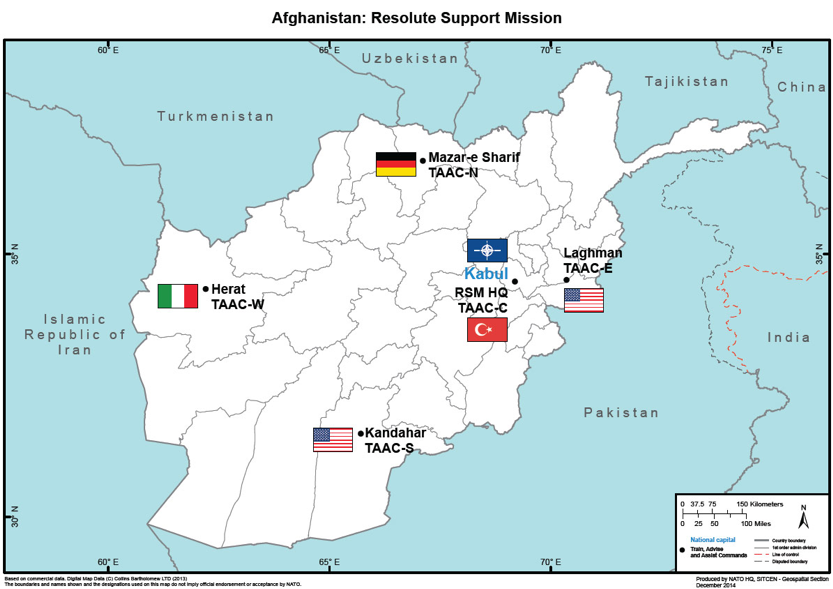 The United States’ NATO allies have been critical partners in stabilizing Afghanistan. These are NATO bases in the country. Source: US Department of Defense, Enhancing Security and Stability in Afghanistan, Report to Congress, Dec. 2016. Available at: https://www.defense.gov/Portals/1/Documents/pubs/Afghanistan-1225-Report-December-2016.pdf.

The United States main goal in Afghanistan is to prevent terrorist safe havens, but military operations alone can’t do this; supporting the Afghan security forces is key.

The primary goal of the United States in Afghanistan should be to prevent it from reverting into a terrorist safe haven from which groups could plan and launch attacks on the American homeland from abroad. Unfortunately, President Trump’s strategy predominantly focuses only on military operations and if we stay the course with his strategy, it could keep the United States bogged down in Afghanistan indefinitely. The key to preventing Afghanistan from reverting into a terrorist safe haven without a continued US presence is for the Afghans to be able to secure and govern themselves. To do that, the United States must focus on the solutions that prevent terrorism from spreading, starting with strengthening the rule of law.

In 2017, President Trump reversed his campaign pledge to withdraw from Afghanistan and approved a plan by Defense Secretary Mattis to send an additional 5,000 troops to advise Afghan forces. This brought the number of US forces to 14,000—just a fraction of President Obama’s surge of 30,000 troops in 2009, which nevertheless failed to bring the Taliban to the negotiating table or fundamentally alter the security situation.6

Despite President Trump increasing the American military presence in Afghanistan, terrorist attacks have continued and the Taliban-led insurgency has raged on, expanding its territorial gains.7 Attacks by Al Qaeda and an affiliate of the Islamic State of Iraq and Syria (ISIS) have led to devastating casualties in Afghanistan and raise concerns that terrorist groups could make further gains in the country.

Al Qaeda organized the attacks of 9/11 from Afghan territory under the patronage of the Taliban regime. The country could once again become a breeding ground for attacks to be launched against the United States from its territory if the current internationally-backed government falters. Absent governance and rule of law in the country, the insurgency will strengthen its hold and create the conditions necessary for terrorists to recruit and launch attacks. If this were to happen, the United States will have wasted an enormous amount of precious blood and treasure for an unrealized goal and it would put the national security of the United States and our allies at risk.

That’s why an essential part of the United States’ mission in Afghanistan has been to support the Afghan National Security Forces (ANSF) in securing their own country through the provision of training, advice, and assistance. This support has allowed the Afghan government to set up essential governance and security structures. But while Afghanistan has made progress, Afghan forces continue to struggle with the threats of terrorism and insurgency, as well as internal issues such as recruitment shortfalls, gaps in military capabilities, and corruption.8 In February 2017, General John W. Nicholson, the commander of the US-NATO mission in Afghanistan, told the Senate Armed Services Committee that the war in Afghanistan had reached a “stalemate.”9 President Trump’s 2017 strategy for Afghanistan failed to lay out a comprehensive approach to address these issues with the ANSF and establish clear benchmarks for their future progress. The support to the ANSF must continue to prevent Afghanistan from returning to a terrorist safe haven, but a long-term and comprehensive strategy involving multiple US government agencies is needed to sustain these efforts.

Ultimately, support to the Afghan security forces alone is not enough. More than 11,000 civilians were killed or wounded in 2016, making it the most violent year since 2009.10 In order for the United States to withdraw completely, the Afghan government must be able to secure the country on its own. Full disengagement before the Kabul-based government can stand on its own feet could risk a return to the chaos of the 1990s and give rise to terrorist safe havens that organized attacks like 9/11. But 17 years of US engagement demonstrate that counterterrorism operations will not be enough to stabilize the country. The United States must facilitate conditions for a political settlement between the government in Kabul and the Taliban, and not just rely on a military-focused approach.

The US's goal in Afghanistan must focus on countering terrorism, but success requires a comprehensive strategy that also addresses corruption and governance issues.

Holding control over some parts of the country remains a challenge for Afghanistan’s government. While it has made significant strides in internal governance and development, Afghanistan remains hobbled by corruption and dependent on international aid to survive. Although the United States has provided over $120 billion in development funding to Afghanistan for reconstruction efforts,11 there have been major cases of corruption involving US government funding.12

President Ashraf Ghani and Chief Executive Abdullah Abdullah have sought to confront Afghanistan’s rampant corruption by introducing better oversight of international aid dollars and higher pay for civil servants. But the country is still ranked 169th out of 176 on Transparency International’s 2016 Corruption Perception Index.13 Moreover, the country’s resources continue to be plundered by terrorist organizations and the Taliban insurgency. The Taliban has made $200 million from illicit drugs, which accounts for thousands of civilian casualties in the country each year.14 There are also reports of human rights abuses and torture by state forces, which complicates efforts to legitimize the government outside of Kabul.15 This matters to the United States because corruption and poor governance allow terrorism to thrive. Moreover, deaths caused or perceived to be caused by the US military or through US support are featured heavily in terrorist propaganda and recruitment efforts. To give the Afghan government more legitimacy and earn the public’s trust, the United States should work with Afghanistan to stamp out corruption in all areas of the government by achieving better oversight of funds and deeper institutional reforms.

Stability and security in Afghanistan requires the support of America’s allies and a strategy to address Pakistan’s role.

Because Afghanistan presents a set of complex challenges to the United States, our allies and Afghanistan’s neighbors have an important role to play in securing the country. The United States cannot and should not do it on its own. However, President Trump’s repeated insults of NATO allies could threaten their future willingness to coordinate with the United States in these efforts. At the 2016 NATO summit in Warsaw, allies promised to send Afghanistan more than $800 million annually from 2018 to 2020.16 To ensure that the United States isn’t stuck footing the bill alone, the United States must maintain close relationships with its NATO allies, not insult them or deride their relevance to US security.

Pakistan has long played a role in Afghanistan, allowing the Taliban and other violent extremist groups to find safe havens on its territory. But Pakistan has played both sides on terrorism, also acting as a valuable counterterrorism partner to the United States. President Trump has taken a simplistic approach to solving the issue of Pakistan. The administration has restricted some security assistance to Pakistan because of its support for Afghan militant groups, but it has failed to recognize the US’s crucial role in the conflict and the need to develop a more holistic strategy to deal with the country.

The United States has lost thousands of troops and expended tens of billions of dollars so that the government in Kabul can provide for the country’s security. While negotiations with the Taliban are the only way out of the country’s stalemate, a political settlement will not be easily forthcoming. The United States must prioritize working with our allies to achieve a lasting peace in Afghanistan. 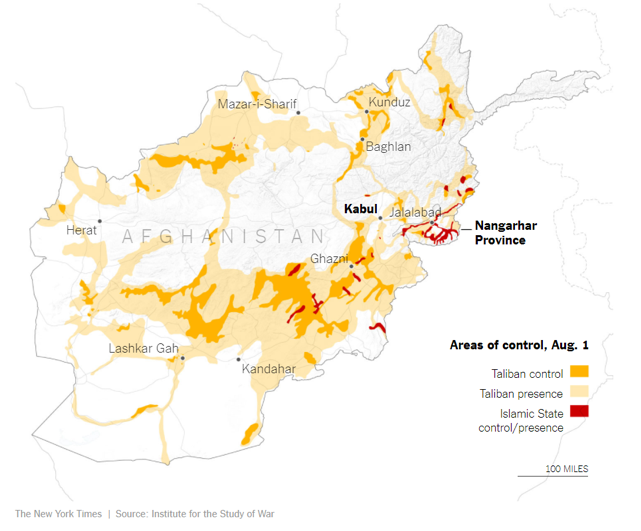 Source: Sarah Almukhtar, “How Much of Afghanistan is Under Taliban Control After 16 Years of War With the U.S.?” The New York Times, Aug. 23, 2017. Available at: https://www.nytimes.com/interactive/2017/08/23/world/asia/afghanistan-us-taliban-isis-control.html.

The United States must prevent Afghanistan from reverting into a terrorist safe haven that can threaten the US homeland. However, as 17 years of experience show, a military-centered strategy alone cannot achieve this goal. To do so, we must advance a comprehensive strategy that includes building up Afghanistan’s internal security apparatus, promoting rule of law and effective governance, and supporting the work of our allies in the region while also dealing with countries that have provided support to Afghan militants that destabilize the country. However, the Trump Administration will not achieve any of these goals if it does not give Afghanistan a path to govern itself and ceases to alienate key allies in NATO and in the region.