American voters have woken up on climate change. There is now a consensus that the climate is in crisis and that action is needed to address it. A Monmouth University poll from just after the 2018 election showed that a majority of Republicans now join the overwhelming share of Democrats in supporting government action on climate change. And Third Way’s polling of the Democratic primary electorate has shown that climate change is a top issue in the race to pick the party’s nominee.

But there is at least one resilient divide within the Democratic Party on key issues. This divide is a product of today’s digital politics, with those very active on social media holding vastly different views than the majority who are less active online. On climate, this has created the perception that Democrats who are active on social media, or Extremely Online, demand a narrow renewables-only approach, and on the other side, the majority of Democrats prefer a less restrictive approach that takes advantages of additional tools to fight climate change.

But are Democrats really so split on how to address the crisis? To test this, Third Way partnered with Change Research on a survey of the first voters who will weigh in on the 2020 primary: likely Democratic primary voters in the early primary states of Iowa, New Hampshire, Nevada, and South Carolina, as well as the Super Tuesday states of California and Texas. Using Change’s innovative recruitment process, this survey exclusively polled active users of social media channels like Facebook. This allowed us to test what Extremely Online Democrats actually believe we should do to address the climate crisis when they’re not playing to the Twittersphere online.

The results show that these voters feel an urgency to address the climate crisis, which is motivated by a sense that it is affecting their communities right now. They also recognize the scale of the challenge and that it cannot be “solved” in a few short years. Because of this sense of urgency and scale, even Extremely Online Democrats call for a technology-inclusive approach to combating climate change, including nuclear and carbon capture, over a renewables-only path. They are willing to bear financial costs to address the crisis, and they’re optimistic that in doing so, we can create a more livable planet and dynamic economy. Finally, they are supportive of the Green New Deal, but to them, any plan to address climate change should focus on cutting emissions and growing the green economy.

Extremely Online Democrats have a sense of urgency to combat the climate crisis now because they are feeling tangible effects of it today. Seventy-one percent say that climate change is affecting their community right now. They are contending with a reality that includes climate-induced natural disasters, from flooding in Iowa and Houston to a year-round wildfire season in California, as well as day-to-day effects like disrupted seasons and rising food prices. Another 23% say climate change is not affecting their community at present, but it will in their lifetime. Just six percent say it is unlikely that climate change will affect their community in their lifetime or ever. 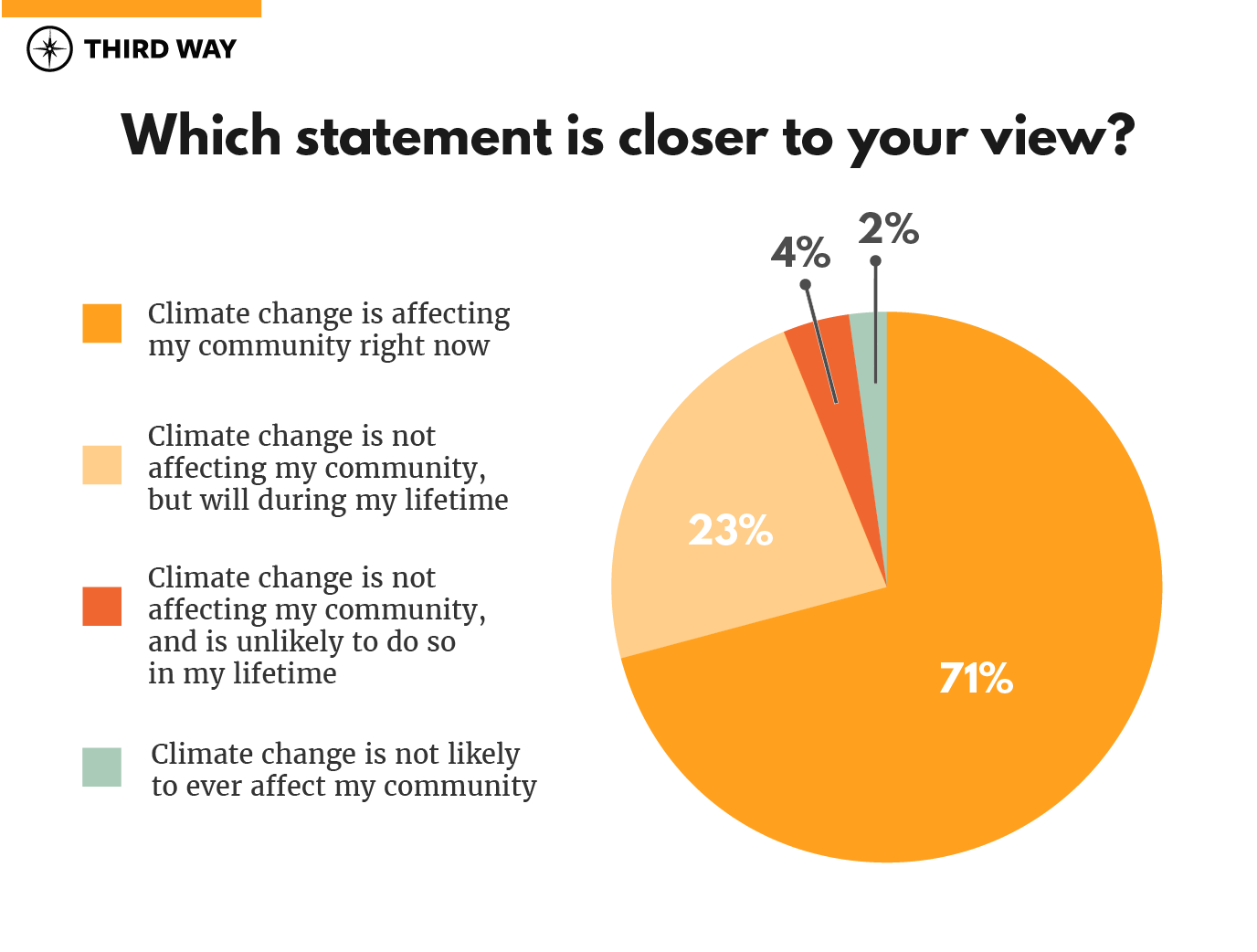 Despite this sense of urgency, these voters know that the crisis cannot be solved in a few short years. Forty-seven percent are optimistic the crisis can be solved, but they believe it won’t happen until the next generation’s lifetime. By comparison, just 19% say it can be done in their lifetime. But only 26% are pessimistic that we can solve the crisis at all. Most know this crisis can be solved, but also that it will require profound, structural changes to our way of life that will stretch over decades not years.

Extremely Online Democrats have a sense of urgency to address the climate crisis, and they recognize the scale of the challenge. They understand that we need action now, but it’s going to take everything we have to solve the crisis. Because of this pragmatic assessment, they strongly prefer an inclusive approach to combating the crisis, which means embracing solutions like nuclear power and carbon capture, over a narrow, renewables-only path. Specifically, 55% want the U.S. to focus on transitioning to 100% clean energy, which means renewables but also nuclear power and carbon capture, while just 36% want renewables only. Among voters who identify climate as their top issue, this preference for 100% clean energy jumps four points to 59%. This reality contradicts the perception nurtured by many of the loudest voices on Twitter and other social media channels, where anything but 100% renewables is described as insufficient. 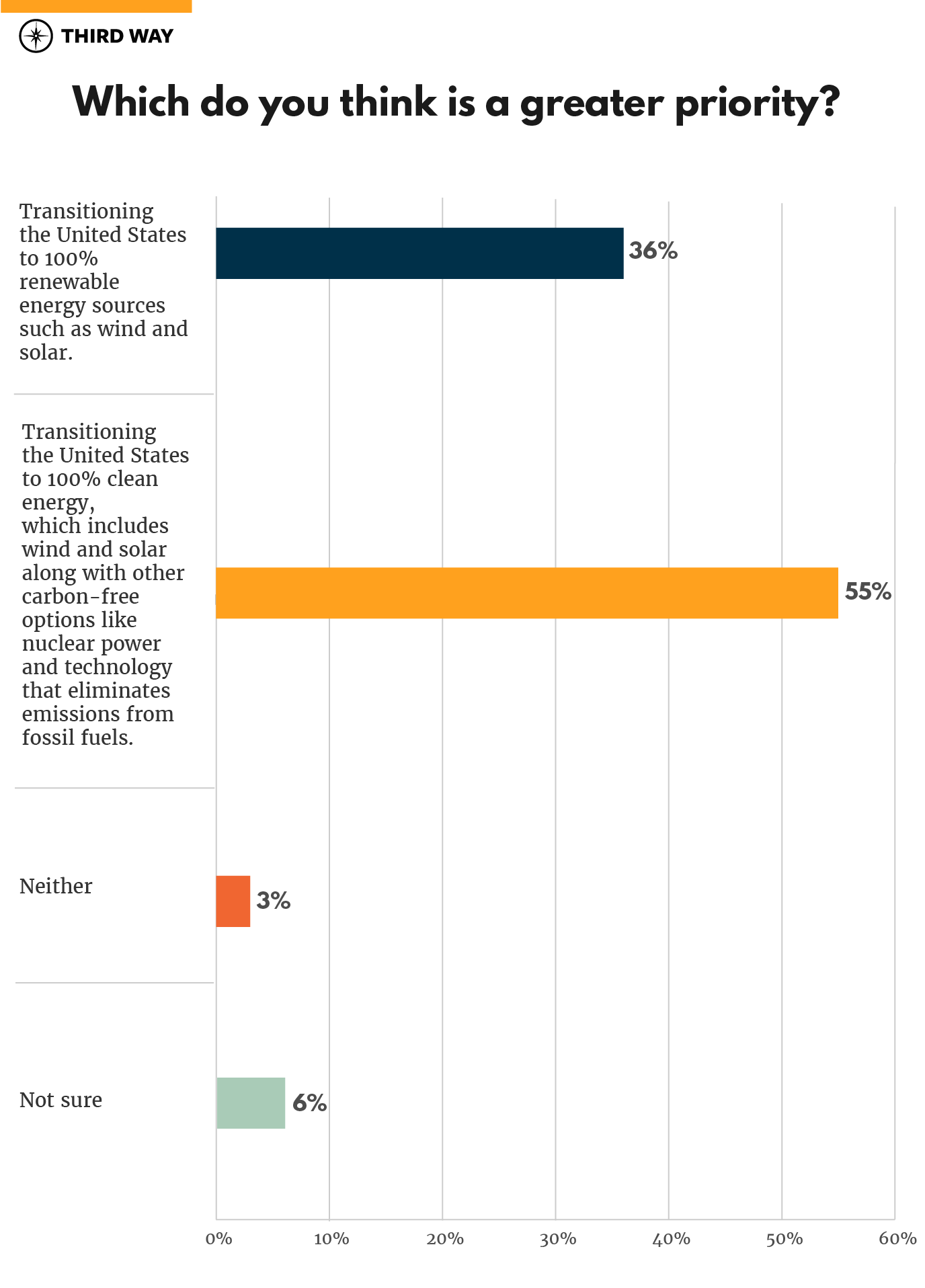 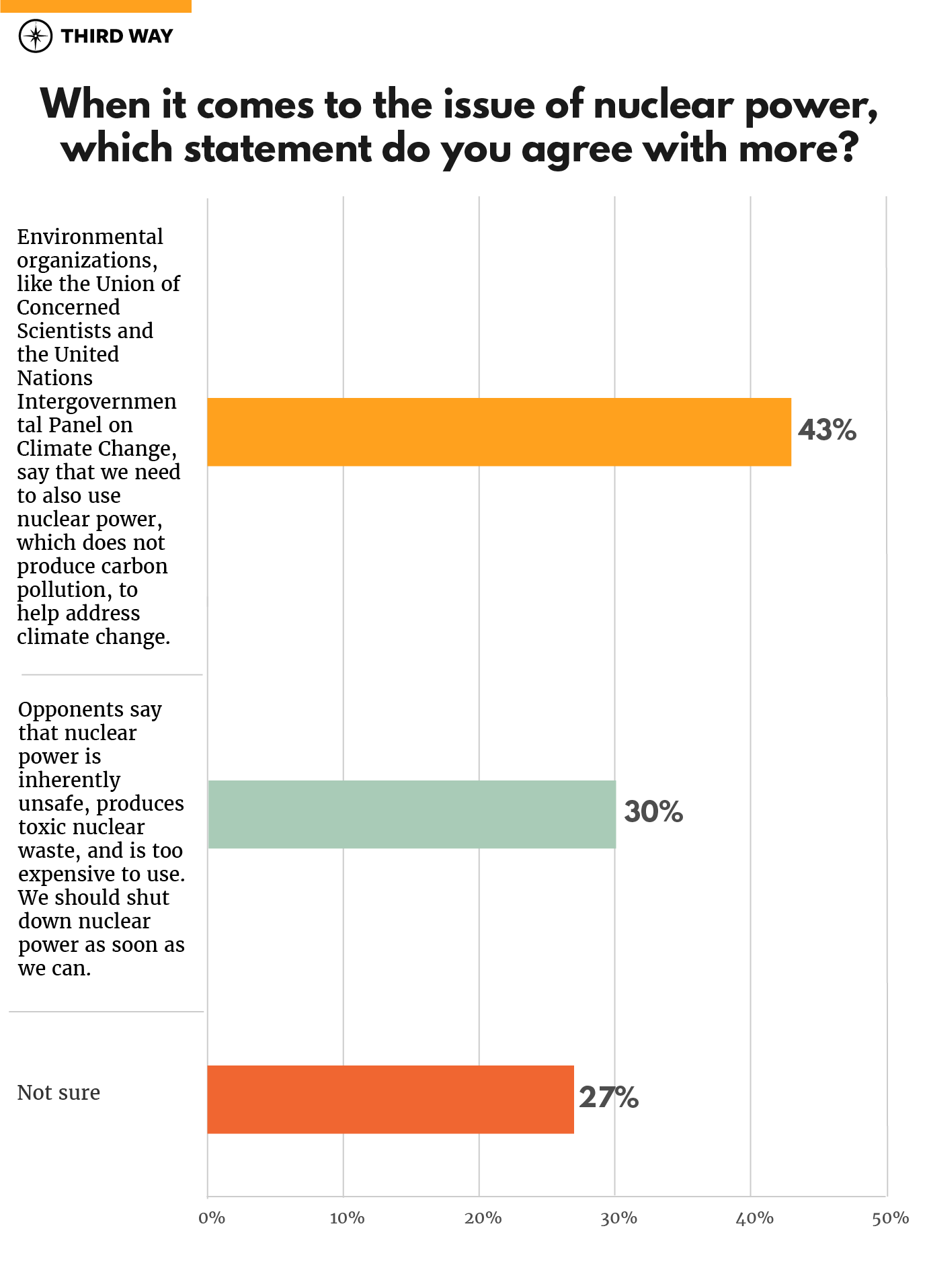 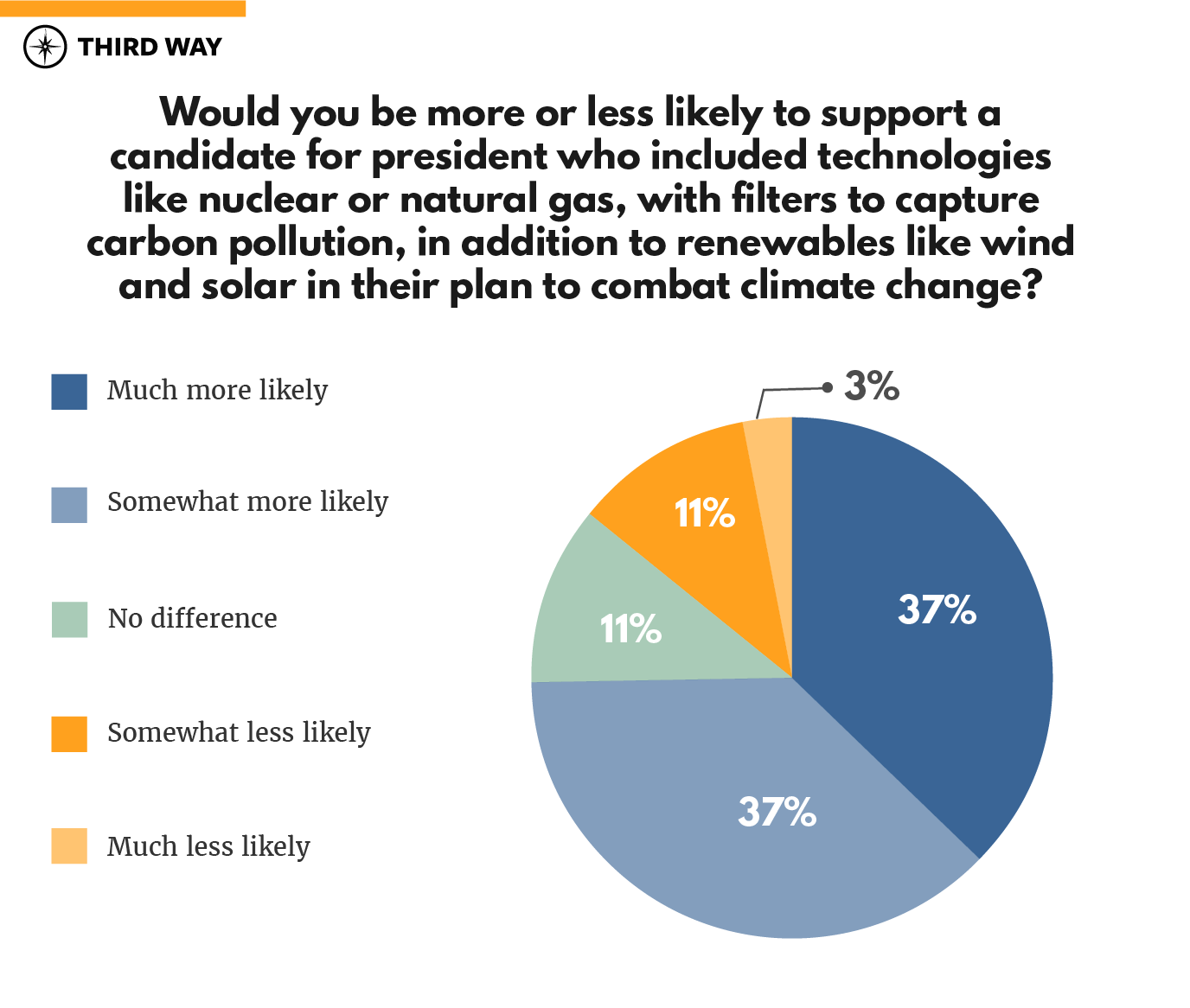 Not only do these voters expect the climate crisis to take decades to solve, but they also prefer a realistic timeline over an aspirational but unachievable path that hopes to get there in a matter of years. Again, despite the perception that Extremely Online Democrats fall outside the mainstream on the climate crisis, they actually prefer the pragmatic timeline for action. Eighty-two percent express “strong support” for getting to 100% clean power in thirty years, but this dips to 70% when the timeline is cut to ten years. They view the former as credible and the latter as just not attainable. Half (48%) say it’s likely we can get to 100% clean power in 30 years, but this drops to 27% when the timeline shifts to ten years.

Voters are clear-eyed about how the climate crisis is affecting their lives today, as well as just how big of a challenge it is to solve, but they also believe we can create a better future by doing so. Voters’ top motivation for addressing climate change is a more livable planet. When asked about the “biggest reward” for successfully addressing climate change, 33% cite clean air and water. Twenty-eight percent name the economic benefits of addressing climate change, such as jobs in clean energy and manufacturing like electric cars. By small margins, women are likely to cite the environment as their top motivation while men side with the economy. Fewer voters identify showing America’s global leadership or reducing international instability as the main benefit of climate action. 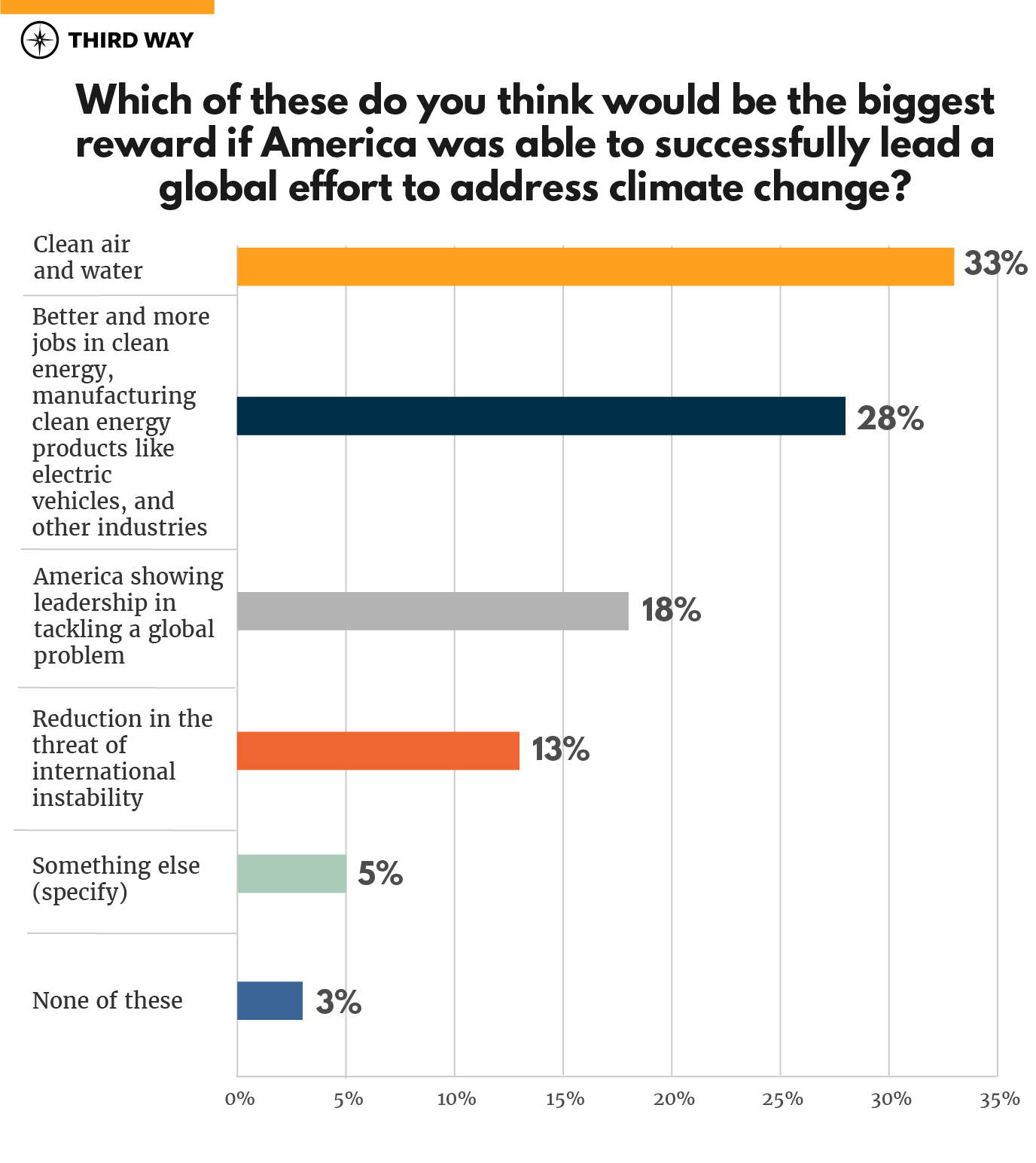 Importantly, these voters are willing to make personal financial sacrifices to help solve the climate crisis now, because they see long-term benefits from taking climate action. A plurality, 40%, say they would pay an extra $20 a month ($240/year) on their utility bill to support climate policies that work to eliminate carbon pollution. Twenty dollars a month was the top of the range provided to respondents; meaning, some number would have been willing to pay even more. Twenty-seven percent would pay an extra $10 a month ($120/year), 20% would pay $5 a month ($60/year), while just 13% say they would not support any bill increase. And when asked about the economic impact of addressing climate change, 82% say they will be better off (68% “a lot better off”) if we take action, indicating they see climate solutions as a financially smart investment, not just an expense.

Voters are supportive of the Green New Deal, but when it comes to policies in a climate plan, they want to keep the focus on the Green part

But when these same voters were asked which policies should be in a plan to combat climate change, the top choices were those that directly address emissions and the green economy. At 40%, the top priority is to rejoin the Paris Climate Accord, followed by increased investment in clean energy innovation (34%) and government investment in green infrastructure (34%). 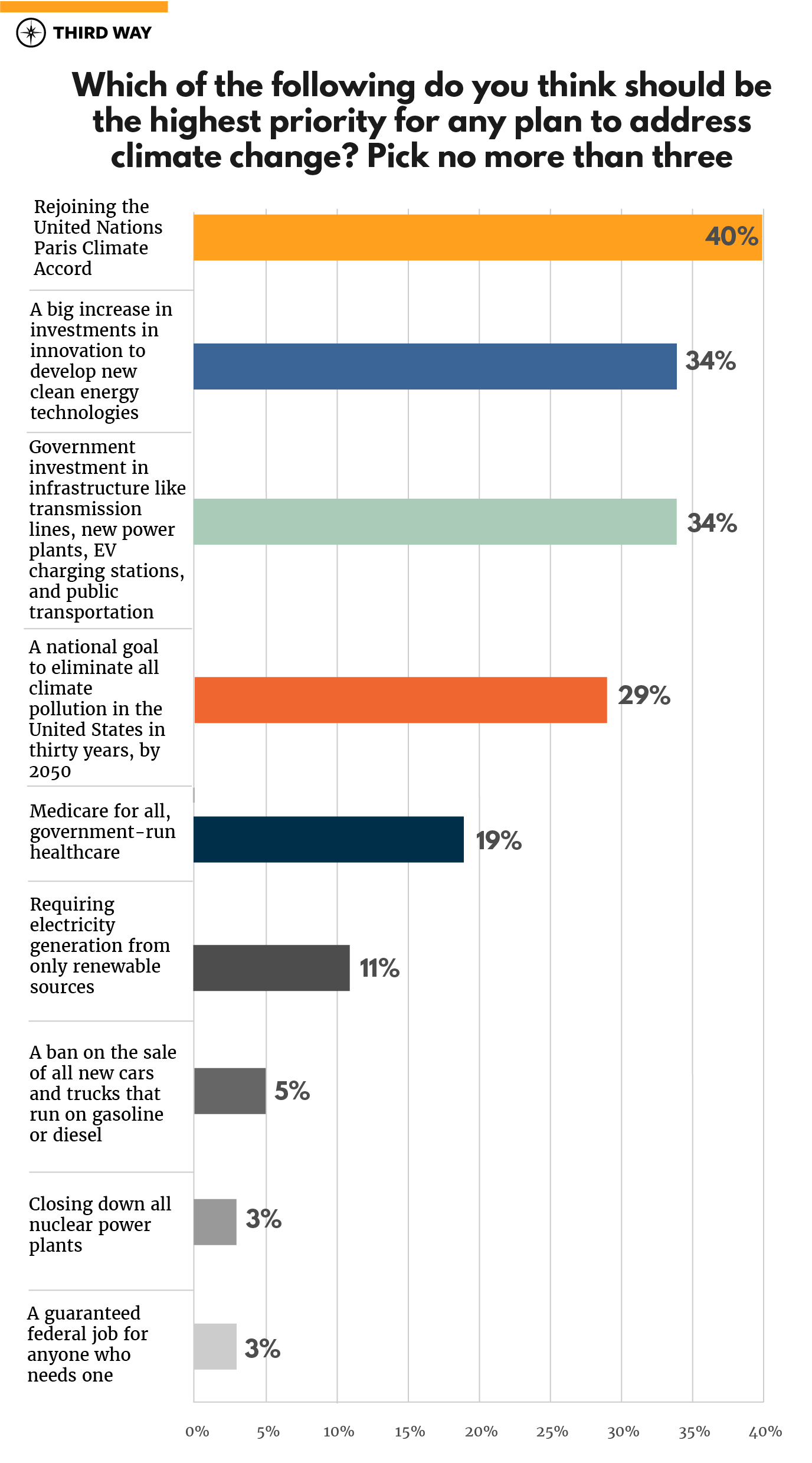 Extremely Online Democratic voters care deeply about the climate crisis that is affecting their communities right now, and because of this, they want to use every tool available to solve it. That means unleashing the power of renewable energy, but also breakthroughs in advanced nuclear and technologies like carbon capture. They also recognize the scale of the crisis, and so they know we need a real timeline for solving it that is measured in decades rather than a few short years. They are willing to bear a financial cost to solve the crisis because they remain optimistic we can create a better planet and revolutionize our economy by doing so. Finally, they support the Green New Deal, but they want a climate plan that focuses relentlessly on cutting emissions and spurring the green economy.

Climate change is one of the defining challenges of our time, and it will be one of the deciding issues of the 2020 election. The results of this poll make clear that Extremely Online Democrats align with the majority of Democrats on wanting a real, inclusive path for solving the climate crisis.