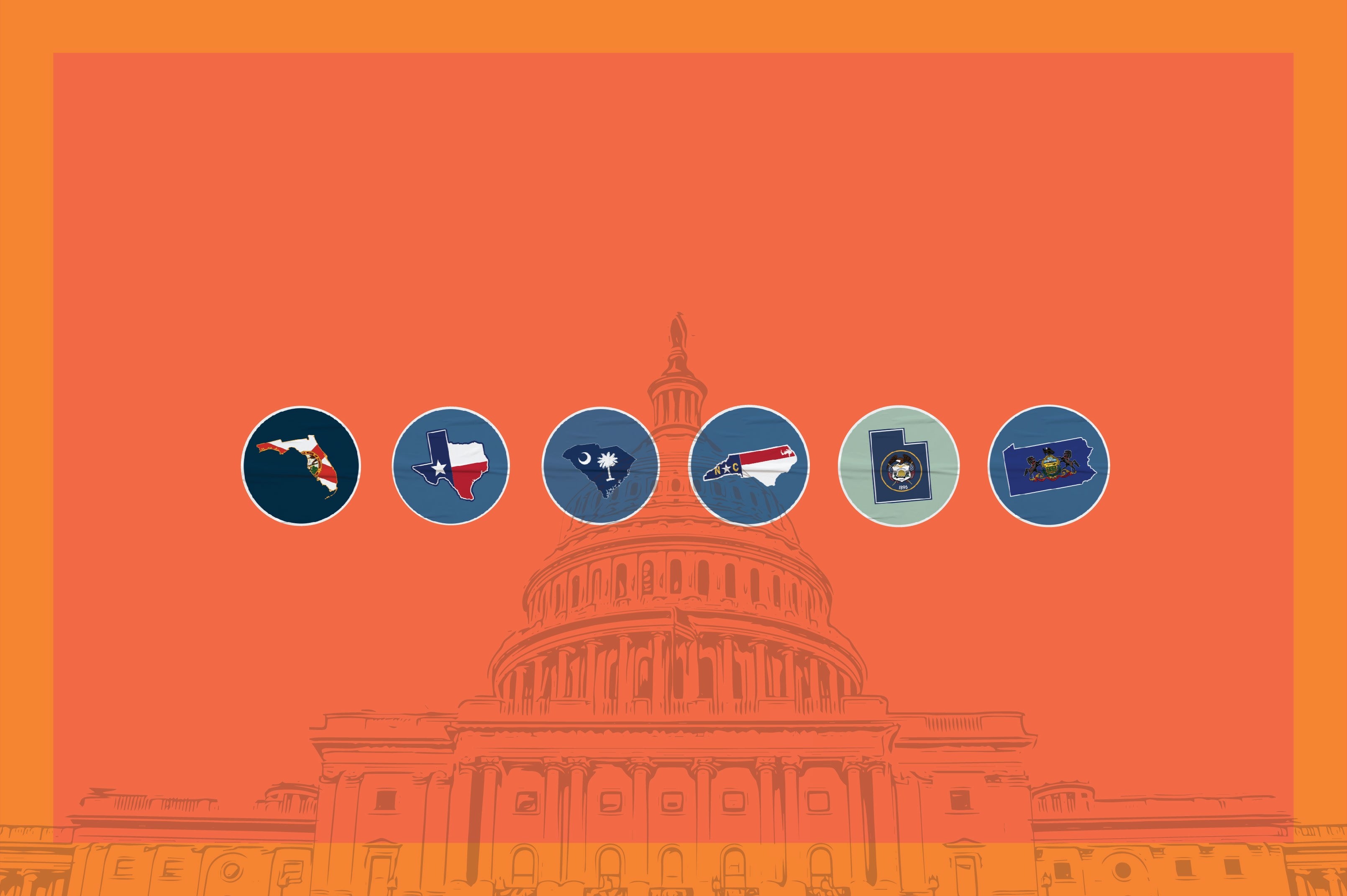 While the final text of the Senate compromise has yet to be released, the framework under discussion encompasses some of the most basic, sensible gun reforms, including enhancing background checks for individuals under 21, closing the “boyfriend” loophole to remove guns from domestic abusers, making investments in mental health services and school safety resources, and incentivizing states to implement extreme risk protection order policies, also known as “red flag” laws, that allow law enforcement to temporarily remove guns from the possession of those who might be a danger to themselves or others. Senator John Cornyn of Texas has been instrumental in leading the group of Republicans to a meeting of the minds with their Democratic counterparts. In a new poll conducted by Third Way and Republican polling firm GS Strategy Group, it is evident that, regardless of party affiliation, Texas voters support the measures currently under debate in Washington and want Congress to pass them into law.1

Texas voters see a need for action on gun safety.

A strong majority of Texans believe there is need for action on gun regulations in the wake of the tragedy in Uvalde. When asked whether it was too easy or too hard to get a gun in America, 80% of Texas voters said it was too easy, with 50% saying it was much too easy. This sentiment was shared among Texans who are Republicans, self-described conservatives, and gun owners as well. Each group said it was too easy to get a gun (66%, 66%, and 73% respectively)

And asked directly, 58% of respondents said they were more likely to support passing stricter gun laws at the federal level after the Uvalde shooting.

Texas voters support the policies proposed by the bipartisan group in the Senate.

When asked about the specific policy items being considered in the Senate’s bipartisan framework, voters voiced overwhelmingly consistent support for each proposal. A full 75% of Texas voters said they support red flag laws that give family members or law enforcement authority to petition for a judge’s order to temporarily remove guns from someone who poses a violent threat to themselves or others. In fact, 58%, say they strongly support this proposal. And supermajorities of Republicans, conservatives, and gun owners expressed support for red flag laws.

Texans also strongly agreed with the idea of expanding scrutiny for young adults who want access to firearms: 80% said they support allowing law enforcement to access sealed juvenile records when conducting background checks, to ensure those with a violent criminal history are not able to purchase guns, including three-quarters of Republicans, conservatives, and gun owners in the sample. And 68% of voters say they support funding research around the effectiveness of gun safety policies.

Not only do Texas voters support the policy proposals in the current Senate framework, they actually want their representatives to go further. When asked whether they support requiring a background check before every gun purchase, including online and at gun shows, 90% of voters responded in the affirmative, including more than 8 in 10 Republicans, conservatives, and gun owners, with 76% of all voters saying they strongly support that requirement. And 80% said they support increasing the minimum age to purchase a semi-automatic weapon from 18 to 21 years old, including 2/3 of each of those three groups. 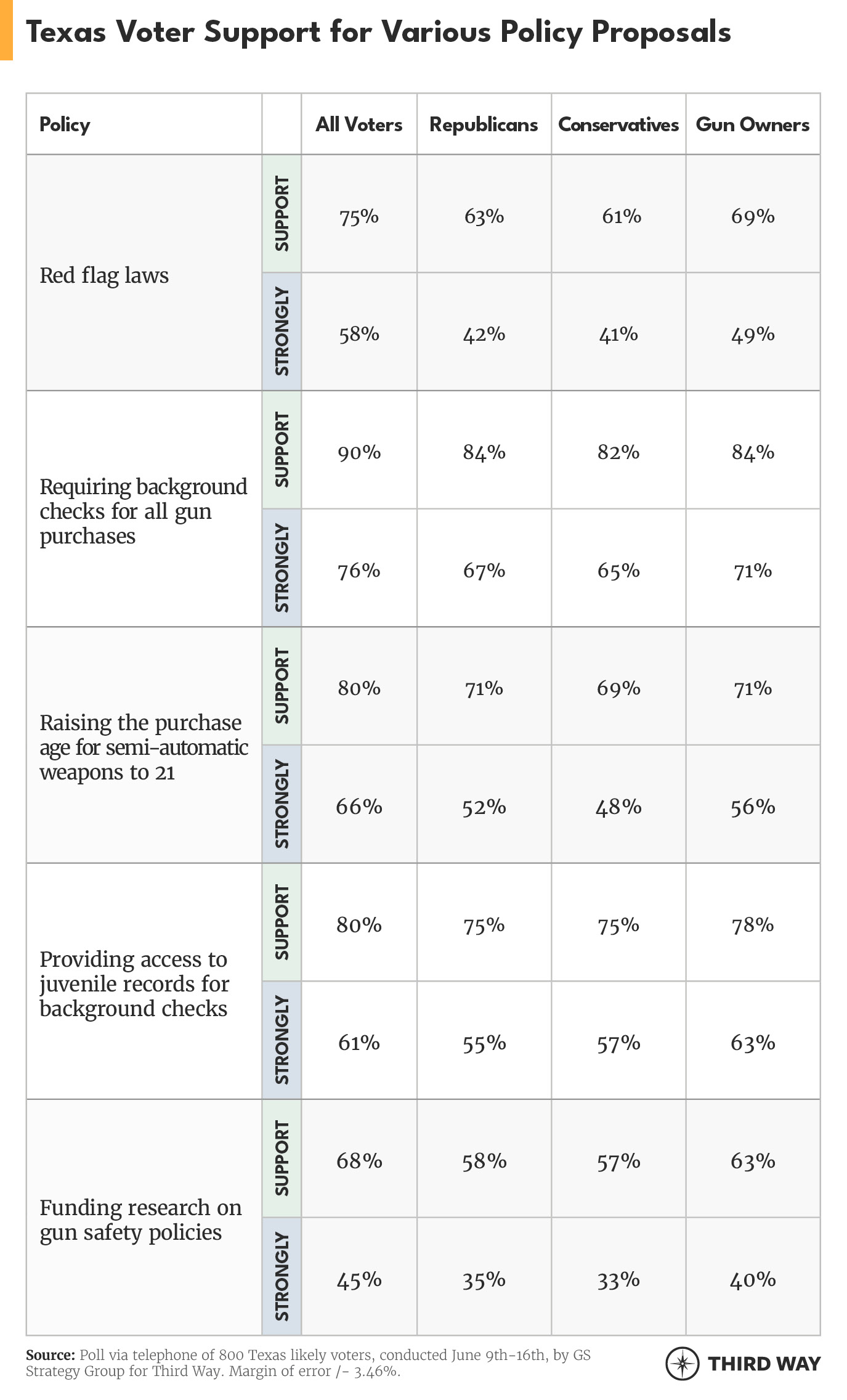 Even when pressed with arguments from opponents of red flag laws, support held strong, with 59% of voters saying they side with supporters of the policy change.

Texas voters would reward lawmakers who advance these proposals.

The framework under discussion in the Senate contains a package of reforms that are overwhelmingly supported by Texans. These legislative components, particularly red flag laws, have been proven to save lives by keeping deadly weapons out of the hands of dangerous people. Texas voters agree that now is the time for Congress to act and pass gun reforms that will make our communities safer.