If Democrats want to be a national party that is set up to win and govern beyond a handful of blue states along the coasts, there is a clear imperative for them to pay close attention to rural voters. The party has won five of the last six presidential popular votes, but two of those elections resulted in Electoral College defeats. Most recently, a massive decline in support for Democrats in rural counties in key states like Pennsylvania, Michigan, and Wisconsin helped to hand Donald Trump the White House, despite strong performance in metropolitan areas. If these trends continue, in 2020 Democrats could add another 1.5% to their popular vote margin of victory and still lose the Electoral College without gaining a single state.

While increasing support in suburban areas could offset rural losses in the House, a continuing decline in Democratic performance with rural voters will virtually doom any hopes Democrats have for a Senate majority. In 2016, every Senate race matched the state’s outcome at the top of the ticket – culminating in a decline in split ticket voting that had been accelerating in presidential years since 1988. There are 20 states where Republicans have won the last two presidential elections by 10% or more, giving Republicans a strong, 40-seat base in the Senate. Unless Democrats can make inroads with rural voters, they will continue to have the Senate deck stacked against them.

Of course, in many of these states speaking to rural voters who previously pulled the lever for Obama is likely among the most effective ways to start rebuilding roads into rural communities. By definition, these voters are open to backing candidates they believe are willing to listen to, rather than dismiss, rural concerns.

A climate message is unlikely to be what wins the rural vote. That said, the way a candidate approaches the issue of climate change solutions with these communities can still leave an impression with voters. Joint Third Way and One Country Project polling indicates there is a path to engage with rural voters, including Obama-Trump voters, in a way that resonates with them by focusing on practical, tangible steps that positively impact rural communities. Failing to address the climate policy concerns of rural voters (or focusing on policies that exacerbate them) can leave a negative impression even among a group of voters that is less attuned to climate issues than other parts of the electorate.

This memorandum summarizes results from a survey of voters, conducted in rural counties across Michigan, Minnesota, Wisconsin, Illinois, Iowa, Pennsylvania, Ohio, Alabama, for a total sample size of 1,600 (200 per state). Margin of error for the entire sample size is +/- 2.45 percentage points, higher for subgroups.

Rural voters say that climate change is real, and a plurality believe it is caused by human activity.

48% say it is due to human activity, 34% say it is happening but caused by natural patterns, and 10% say it doesn’t exist. 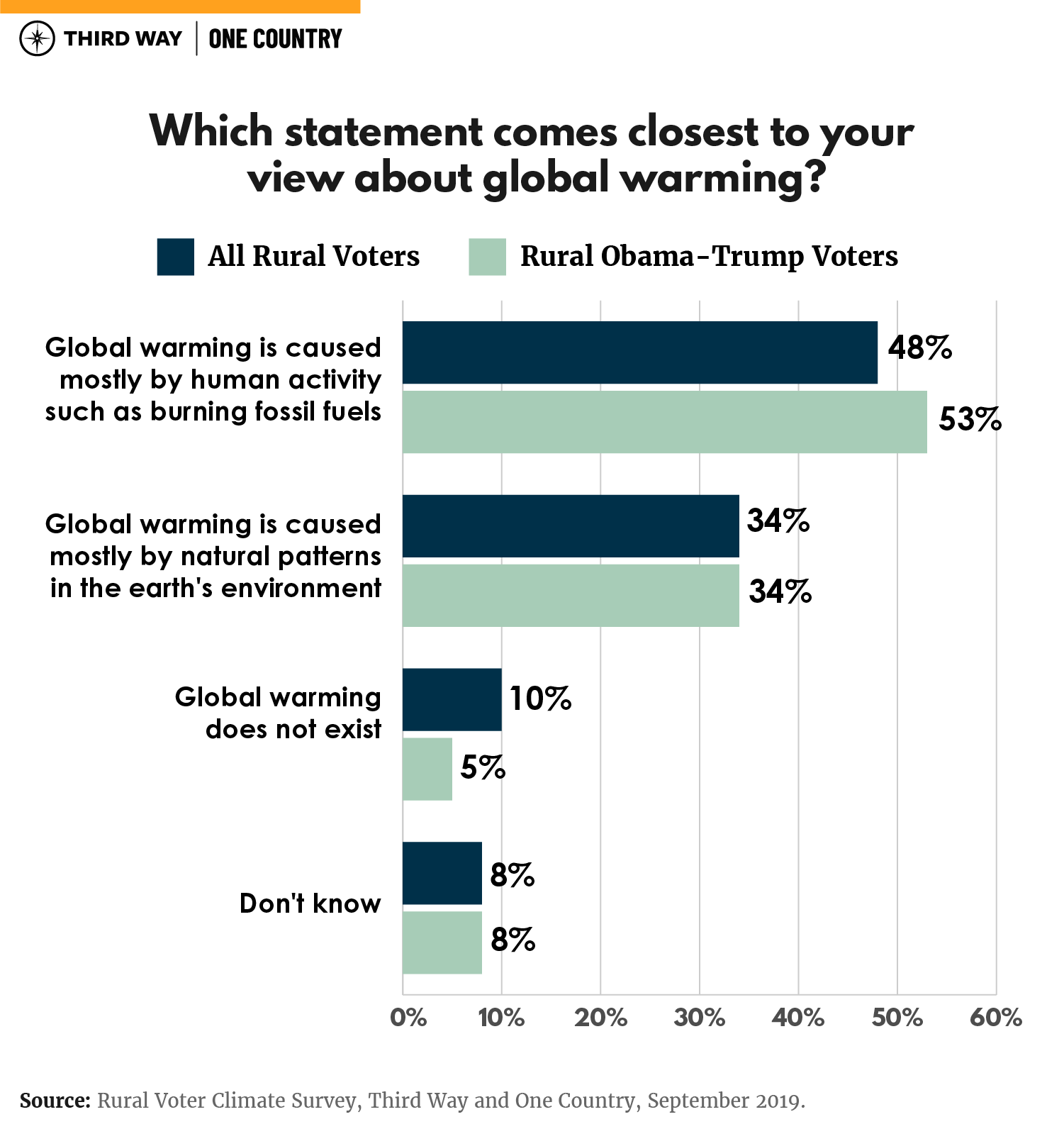 There is less certainty about the overall impact it is having on their communities and families.

Majorities of rural voters say climate change is having a serious impact now: 54% overall, including 59% of rural Obama-Trump voters.

However, small minorities believe it is having an impact on their communities (27%) or their families (26%).

This could help explain why rural voters do not rank fighting climate change as a top priority issue.

Only 3% of rural voters say climate change is the most important issue for the federal government to address in the coming year, rating it after immigration and border security (22%), health care (17%), jobs and economic growth (9%), federal spending and the deficit (9%), national security and terrorism (8%), and guns (6%).

Among rural Obama-Trump voters, only 2% name climate change as the most important. This ties with damage from severe weather patterns as the lowest-ranked specific issue for the federal government to prioritize.

Rural voters feel they aren’t being heard on climate change, and their level of trust in President Trump and both political parties is extremely low.

Rural voters believe they should be at the table for climate change policy decisions.

71% say that rural voices have an indispensable perspective on climate change — which is agreed upon across party lines.

58% believe that farmers and ranchers have an important role to play in addressing climate change.

They don’t believe that they are being heard when leaders across the political spectrum talk about climate change.

Majorities of rural voters say that President Trump (54%), Republicans (58%) and Democrats (62%) do NOT take their way of life into consideration when they talk about climate change. 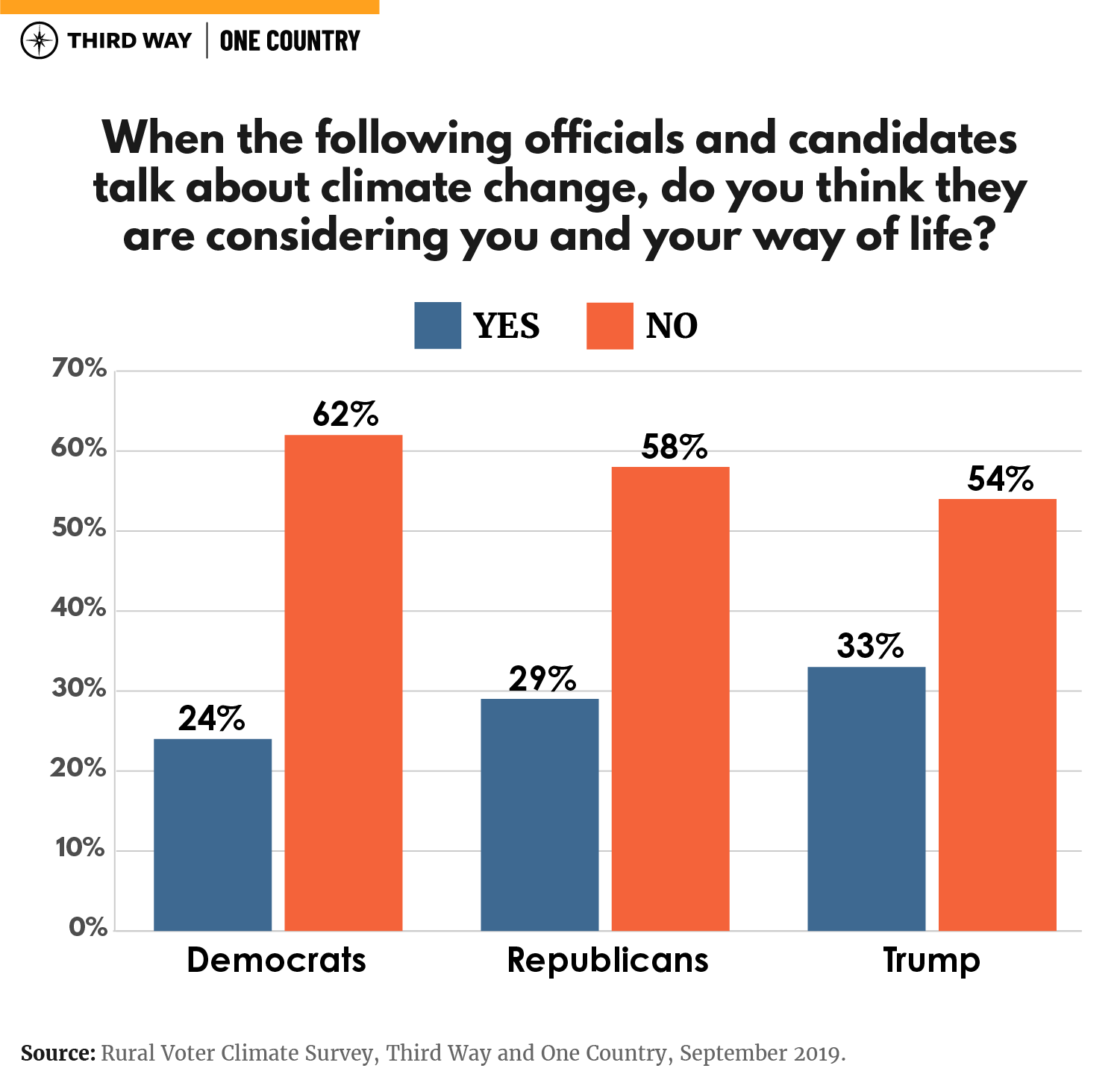 As a result, they have low levels of trust about federal and other governmental institution’s ability to handle climate change the right way.

These voters have considerably more trust in other groups to handle climate change the right way.

36% of rural voters trust scientists a great deal, followed by farmers and ranchers (25%), people in their communities (25%) and even environmental groups (25%).

These four choices were also the most-trusted by rural political independents and rural Obama-Trump voters.

There is a desire for action on climate among the rural voters we polled, but their focus is on concrete actions, and how climate policies will impact competitiveness and job creation.

Rural voters believe that if done right, addressing climate change can improve US competitiveness and encourage countries like China to follow our lead. This would also help the US become a world leader in clean energy technology, and generates strong support for innovation among rural voters.

59% of rural voters surveyed said that it was their point of view that if we address climate change the right way, it will improve America’s competitiveness as we become a world leader in clean energy and technology. This will create new, high paying jobs, allow us to export our products internationally, and force other countries like China to follow the same rules.

This optimism – again, in the context of doing things “the right way,” has similarly strong resonance with rural independents (63%) and rural Obama-Trump voters (60%).

61% believe that our action could make the US a world leader in clean technology.

This may explain why investing in R&D is such a popular policy option among rural voters (76% total support, with 40% strongly supporting). It ranked third out of eleven policies among our total sample, and second among rural Obama-Trump voters.

Jobs are on their minds as they consider the right way to fight climate change.

Just 38% support action if it risks jobs in their communities, and that number is lower among rural Obama-Trump voters (33%).

An additional 26% of total rural voters and 35% of rural Obama-Trump voters would support action if jobs were protected or new jobs were brought to their communities, bringing total support for action up to 64% and 68% respectively.

But they are divided on the idea that American leadership in clean energy technology will actually lead to high-paying manufacturing jobs where they live (44% agree, 38% disagree). Rural Obama-Trump voters are split along roughly the same lines (46% agree, 36% disagree).

Rural voters we surveyed responded better to a climate message built on concrete actions taken in their communities, as opposed to a “national all-out mobilization.”

Given the choice between “transforming” America’s economy through “groundbreaking government policy” and a “national all-out mobilization” (35%), and another option marked by “concrete steps” to fight climate change while protecting their jobs and way of life (45%), rural voters preferred the second option.

This preference was even more pronounced among rural Obama-Trump voters (23% to 63%).

Out of eleven different policies to fight climate change, the two most supported by rural voters were those with concrete impacts closest to the household level.

69% agree that farmers could benefit from incentives to improve soil health and develop more environmentally friendly forms of agriculture, including 74% of rural Obama-Trump voters.

Out of eleven policy options offered, rural voters were most supportive of incentives and other methods to encourage cleaner energy and lower emissions such as home weatherization incentives (85%), tax credits for solar energy (77%), public investment in innovation (76%), including carbon-free nuclear and carbon capture technologies in the power mix (69%), and tax credits for wind energy (68%). These were also the options receiving the greatest support from rural Obama-Trump voters.

The policy option most opposed by rural voters is a ban on fossil fuel exploration on public lands (53% total opposed, with 34% saying they strongly oppose).

Interestingly, there is much less opposition to ending fossil fuel subsidies (32% total opposed, with 15% strongly opposed). In fact, 56% of rural voters support or strongly support ending these subsidies (this number rises to 60% among rural Obama-Trump voters).