Three new polls of likely general election voters in the Blue Wall states of Pennsylvania, Michigan, and Wisconsin reveal that voters are deeply skeptical about Medicare for All and that the policy will not help Democrats beat Donald Trump in these top 2020 battleground states.1

These findings may explain why by margins of 19-points in Pennsylvania, 16-points in Michigan, and 17-points in Wisconsin, Democrats and persuadable voters would rather the Democratic nominee run on building off the ACA over Medicare for All.

The Blue Wall is Democrats’ clearest road back to the White House. But winning there requires that Democrats leverage every electoral advantage and minimize liabilities. Right now, Trump’s campaign polling shows that voters don’t trust him on health care, but if Democrats embrace Medicare for All, this would turn a guaranteed liability for Trump into a political jump ball just in time for the general election campaign.

#1: Medicare for All is underwater by double digits in two of three Blue Wall states. 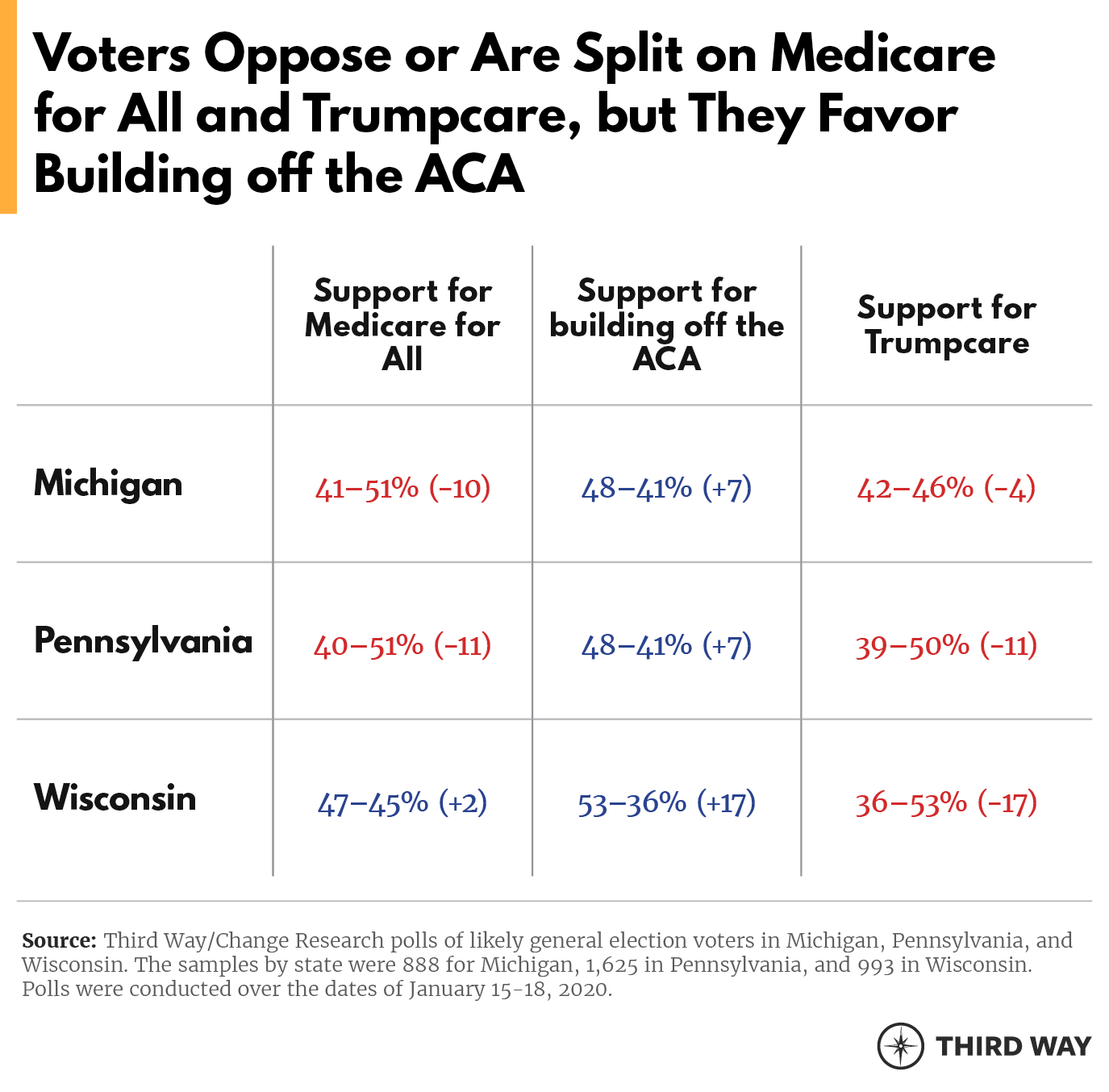 However, in all three Blue Wall states, voters favor a “health care plan that builds off the Affordable Care Act to cover everyone and reduce costs” and prefer that plan over the other two health care policy options by wide margins. A plan to build on the ACA outperforms Medicare for All by 17-points in Michigan, 18-points in Pennsylvania, and 15-points in Wisconsin. Those who are strongly opposed to Medicare for All are double the number who are strongly in favor in Pennsylvania (43% to 21%), Michigan (42% to 22%), and they come close in Wisconsin (37% to 22%).

Voters’ skepticism about Medicare for All begins with the belief that it will raise their taxes. Half of voters in each of the Blue Wall states believe they will pay much more in taxes personally, and more than two-thirds say it is unlikely that a Medicare for All health care plan could be enacted without raising middle-class taxes.

While large numbers of Blue Wall voters are certain of the costs, there is also a high degree of doubt about the benefits.

By a three-to-one margin, voters in each of the Blue Wall states say they are less confident in the government running the entire health care system compared to the system we have now. As a result, they are worried about the quality of care. By huge margins (ranging from 21-points in Wisconsin to 32-points in Michigan), voters think that “Medicare for All would lead to lower-quality care and longer wait times.”

Some of this skepticism may be because most voters in our poll are satisfied with the coverage they now have. Sixty-six percent of those with coverage in Pennsylvania, 64% in Michigan, and 62% in Wisconsin rate their current health insurance plan as “excellent” or “good.” Most of the rest rate their plan as “acceptable.” Less than 10% in each state give their plan a rating of “poor.” Fewer than 5% in each state lack coverage altogether.

What most voters in the Blue Wall states want (especially Independents and those who already have coverage) is a focus on costs. In all three states, when forced to make a choice, voters rate a federal focus on “reduc[ing] the cost of healthcare and prescription drugs” over “guarantee[ing] healthcare to all Americans” as a higher priority.

#3: A generic Democrat who seeks to build off the ACA performs better against Trump than one who favors Medicare for All.

In all three Blue Wall states, the race against Donald Trump is exceedingly close. In Michigan, a generic Democrat loses to Trump by two points. In Pennsylvania, the race is tied. In Wisconsin, the Democrat has a four-point lead. This suggests that the 2020 presidential race could end up being as close as 2016 when Hillary Clinton lost the three Blue Wall states by a combined 77,744 votes.

A central argument from Medicare for All advocates is that the issue will put Democrats over the top in these tough races by increasing enthusiasm among base voters. But in a split sample question where half of respondents receive one version of a question and the other half a different version, Democratic voters in the Blue Wall states were no more enthusiastic about voting for a generic Democrat who supports Medicare for All than one who runs on building off the ACA. Medicare for All is not the answer for getting out Democrats’ vote in the Blue Wall in 2020. 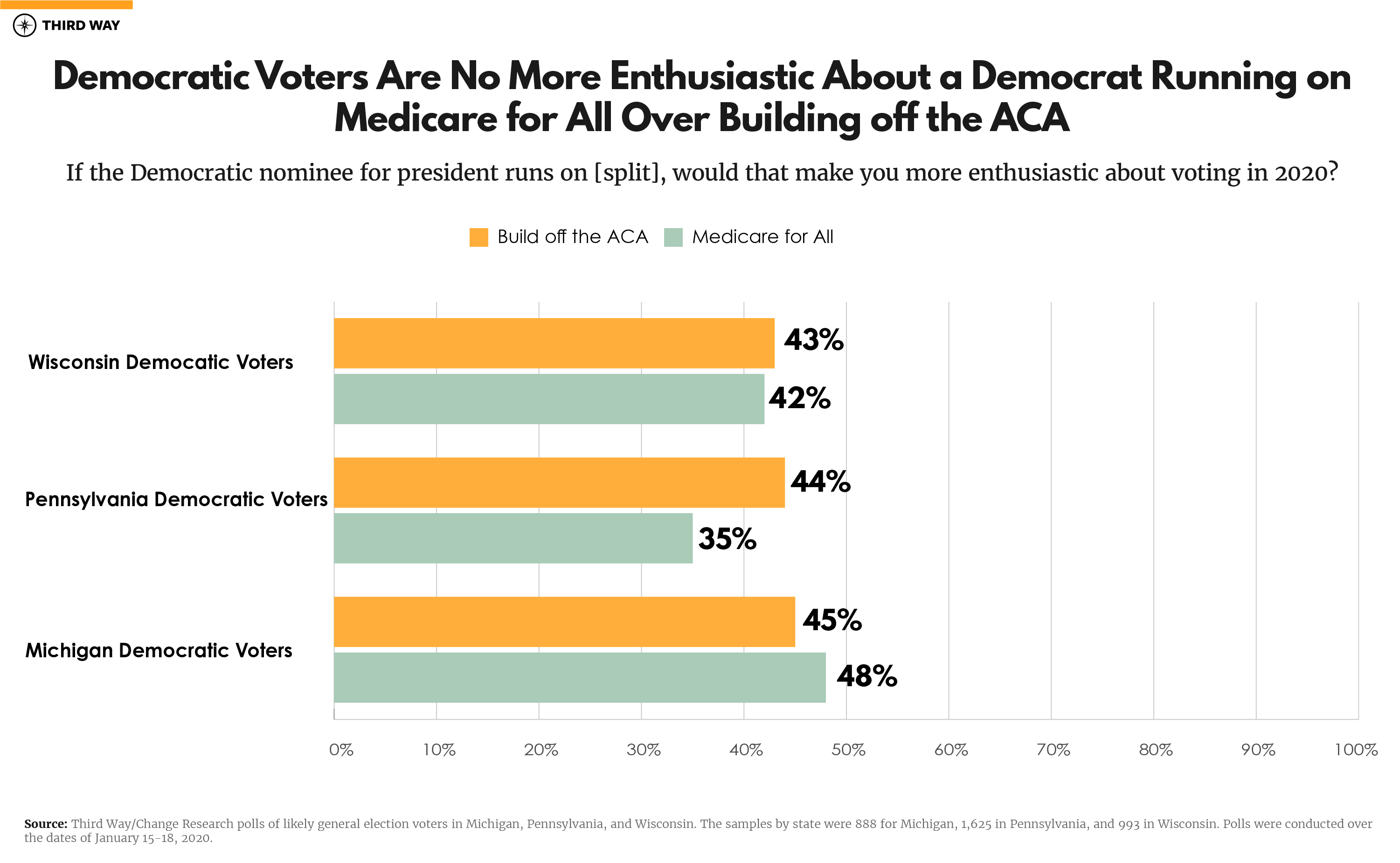 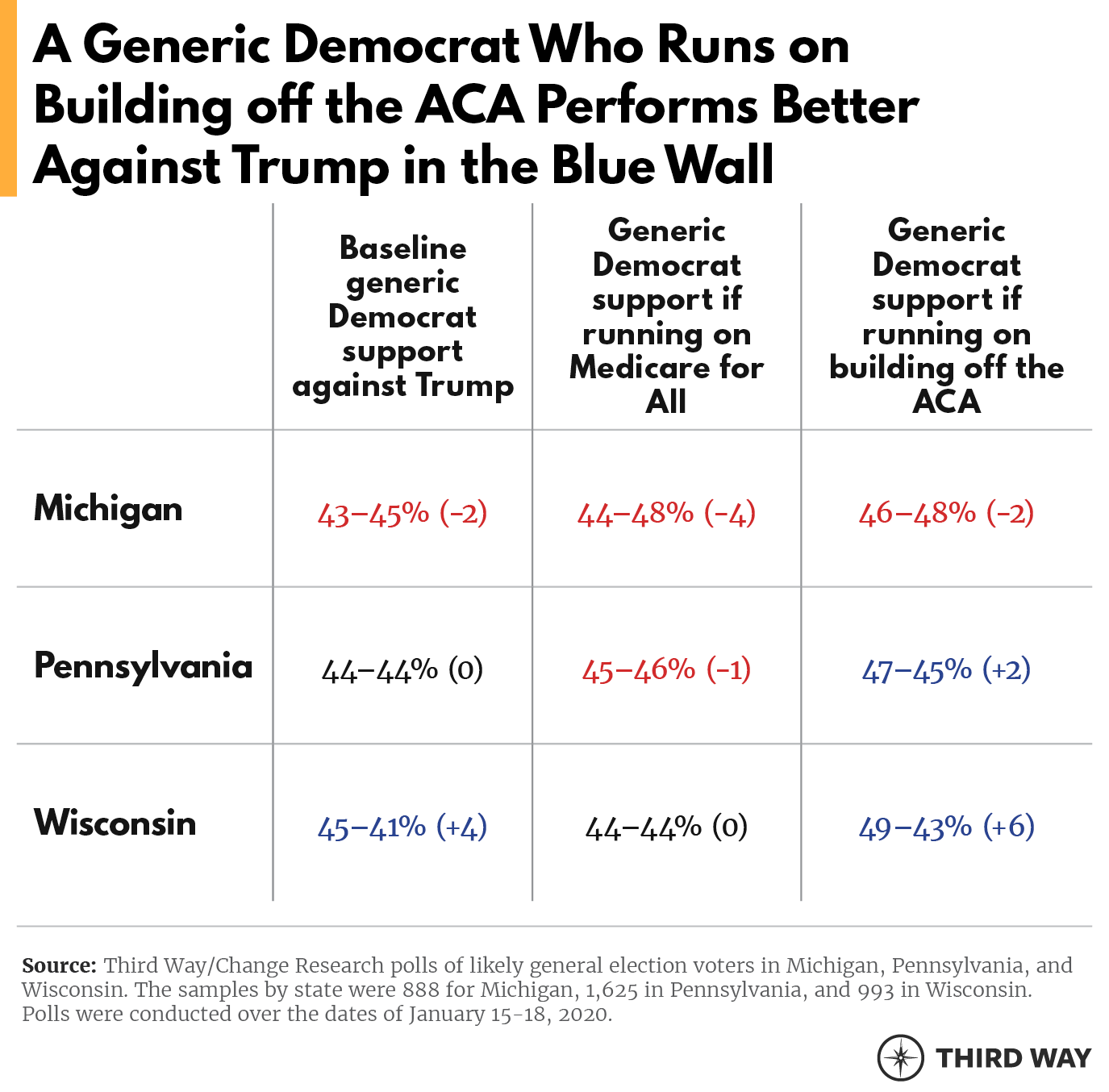 Medicare for All engenders palpable political angst among Democrats and persuadable voters because they believe it will not help beat Trump. As noted at the top, these voters were given a simple forced-choice question: “Would you prefer that the Democratic nominee for president runs on single-payer Medicare for All” or “building off the Affordable Care Act”? By double-digit margins, Democrats and persuadable voters in each state said they would prefer the nominee runs on building off the ACA. 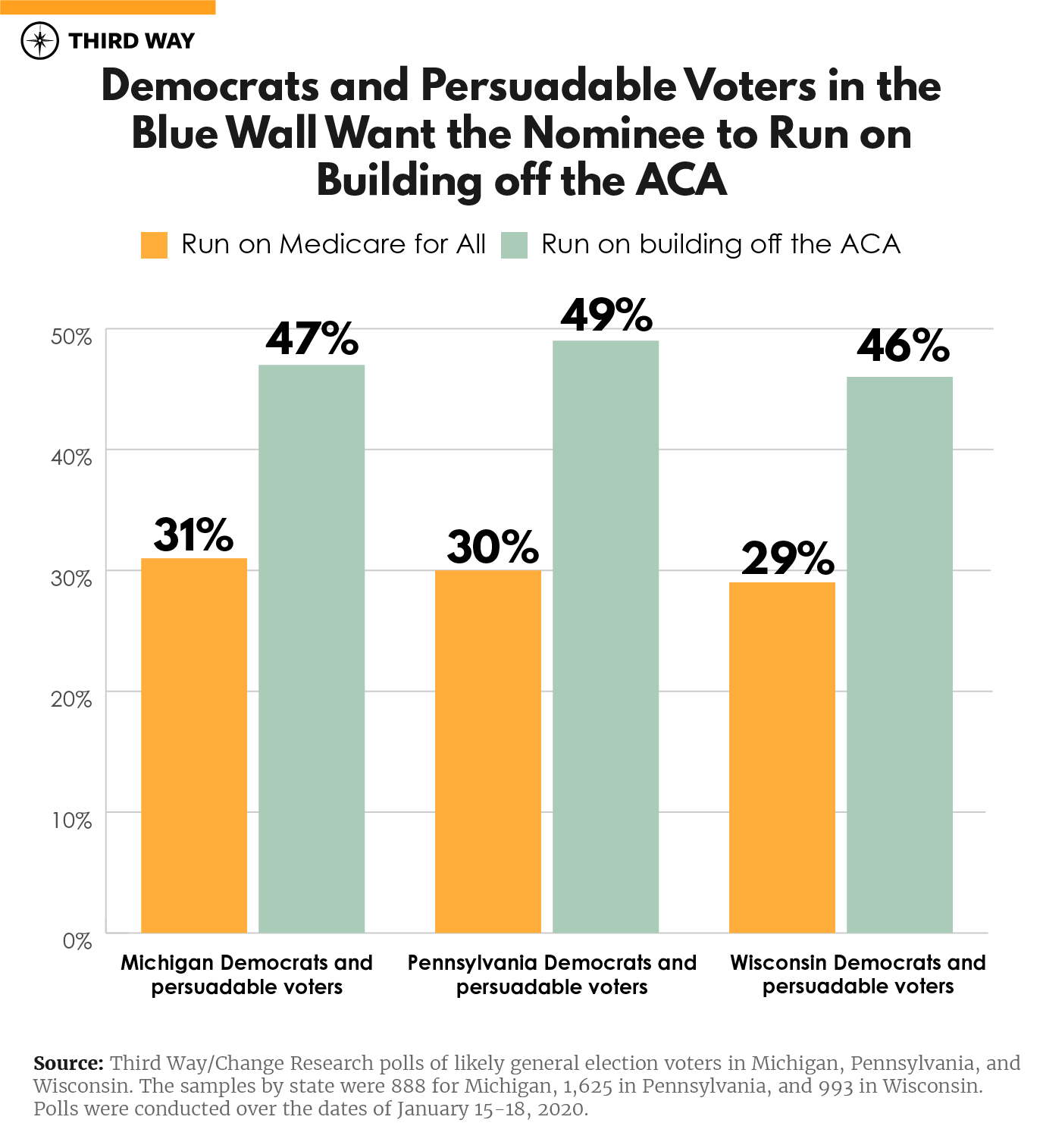 Donald Trump is underwater on health care, and in 2018, health care was the top policy issue that Democrats used to win a historic wave election. To beat Trump in 2020, health care must be a decisive winner for Democrats again. But Medicare for All gives up that edge.