Earlier this year, we outlined how increased funding for five federal programs could help the United States accelerate the development and deployment of sustainable aviation fuels (SAF) and other clean aviation technologies to put us on a path for net-zero emissions by 2050. SAF, a liquid fuel that can be used in today’s aircraft and achieves significant emissions reduction compared to fossil-based jet fuel, presents the most promising near and long-term opportunity for decarbonization.1

While the recently passed Inflation Reduction Act (IRA) includes important new investments that will help scale up SAF that is already commercially available, RD&D funding will continue to be critical to unlocking new, cleaner, and more affordable ways to make these fuels. This funding will also be key to ensuring that other promising technologies like electric propulsion, hydrogen power, and advancements in aircraft design continue to make headway. While Congress has passed a continuing resolution (CR) to keep the government funded until mid-December, we shouldn’t lose sight of the importance of boosting funding for these programs as we move closer to a final FY23 budget.

How the House and Senate Bills Stack Up

There are many different federal programs working toward cutting aviation emissions. Third Way has identified five key programs that have been particularly successful so far and that Congress should prioritize in FY23 appropriations.2 Table 1 below shows these five programs, our funding recommendations for FY23 compared to FY22, and the funding levels included in the House and Senate appropriations bills. 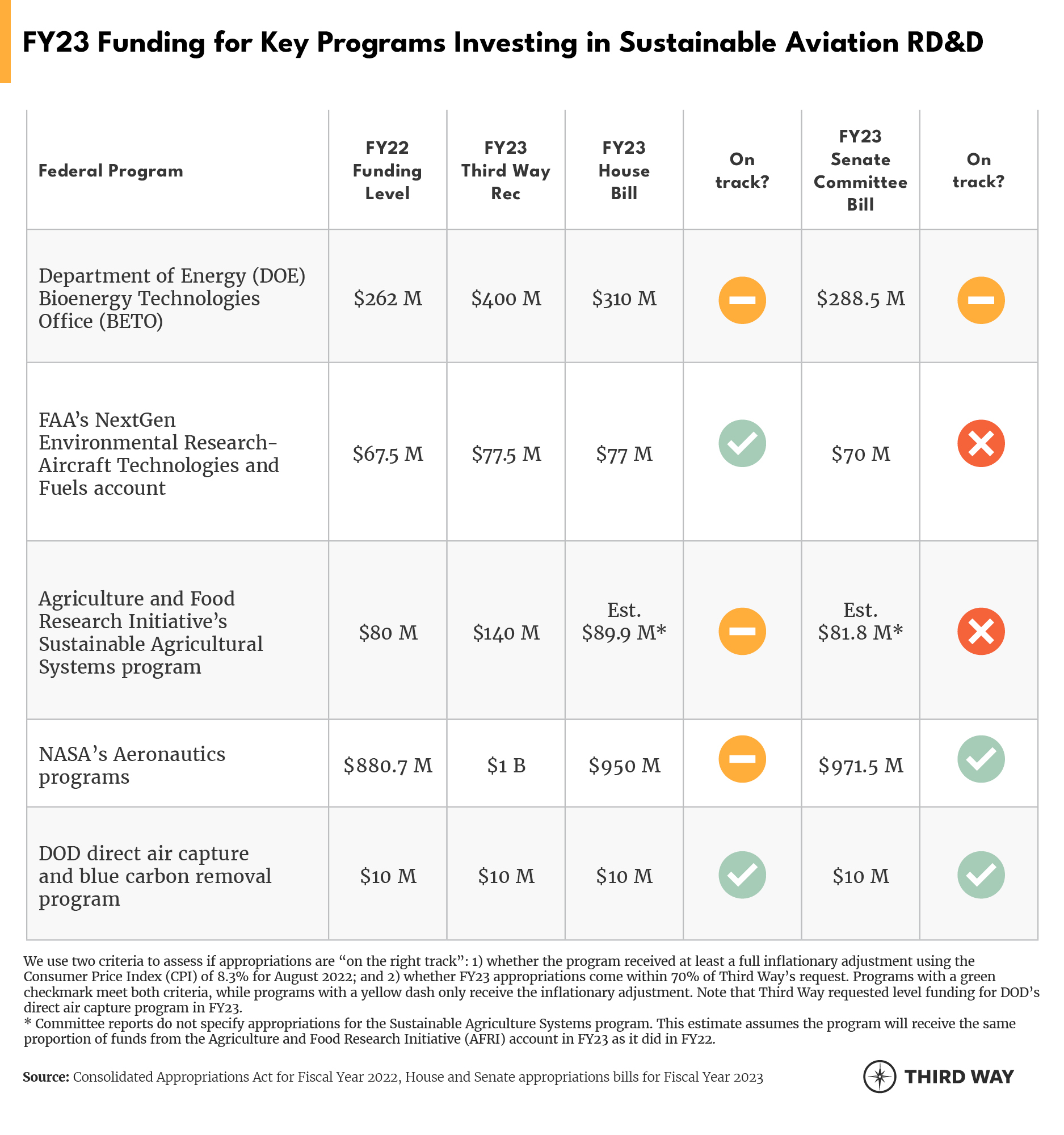 BETO supports RD&D for biofuels made from sustainable biomass and waste resources. BETO has funded work that has helped to make biofuels produced by a wide range of feedstocks more affordable and has helped achieve significant emissions reductions compared to traditional fuels. However, the office needs more funding both for early-stage research into new feedstocks and biorefining processes to make SAF–particularly for pathways with net-zero lifecycle emission profiles–and for getting pathways that have shown promise in the laboratory out into the field for demonstration.

Both chambers have clearly taken note of BETO’s track record on RD&D and given the office additional funding to accelerate that work. The House bill provides $310 million for BETO—an 18% increase over FY22—while the Senate bill provides $288.5 million, a 10% increase. Though this is less than our recommendation of $400 million, both chambers direct BETO to focus a significant portion of its work on getting feedstocks and biorefining processes with net-zero emissions potential into the demonstration phase.3 Both bills also direct DOE to develop a uniform framework for evaluating how we measure emissions reductions and environmental integrity between different types of SAF, which will be key to making sure federal funds go towards developing and scaling up the very cleanest alternatives to fossil jet fuel. 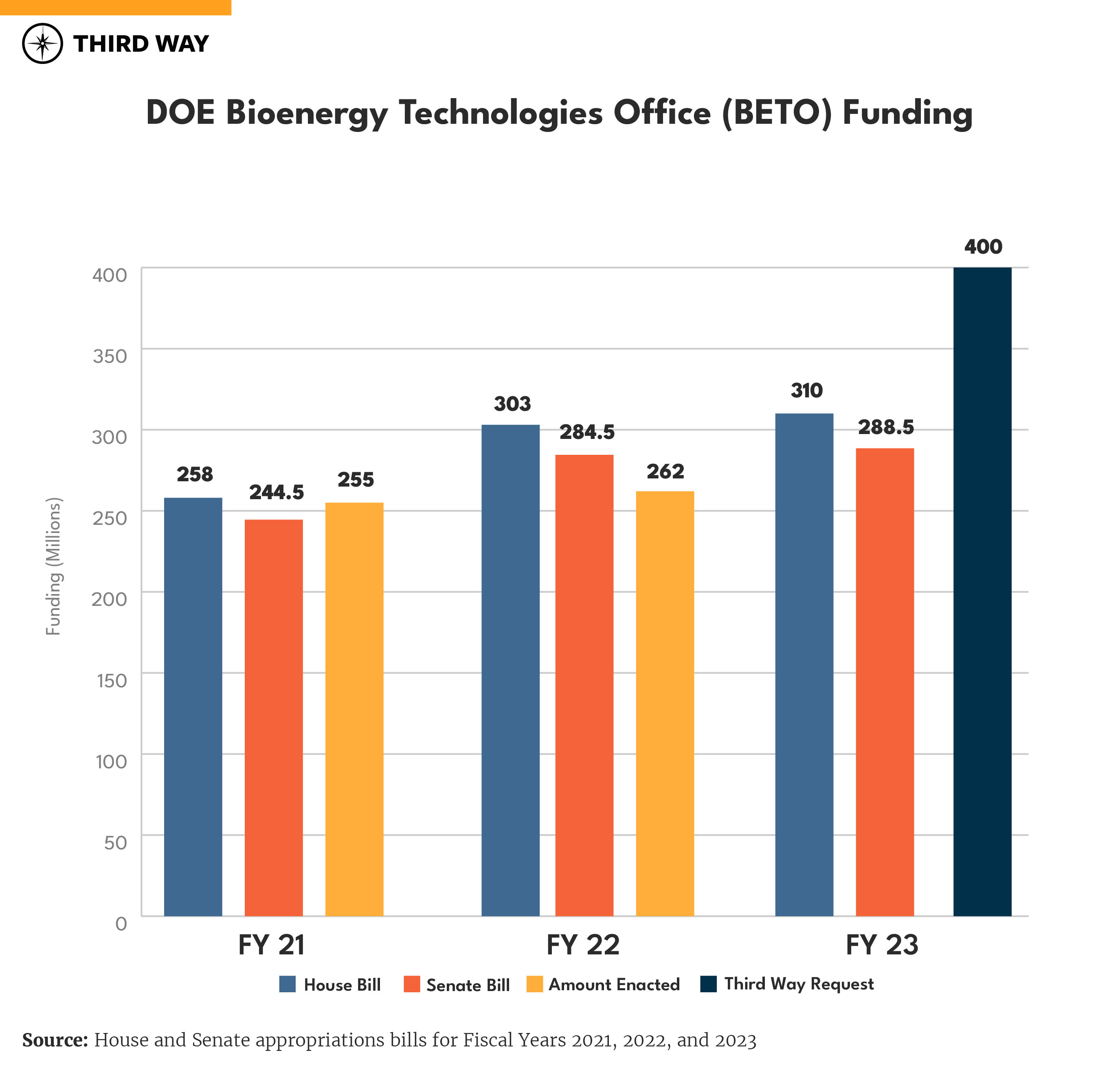 FAA’s NextGen Environmental Research programs are essential to developing, scaling up, and deploying the clean fuels and aircraft technologies that will help reduce aviation emissions. Included among these programs are the Continuous Lower Energy, Emissions, and Noise (CLEEN) Program, which enables FAA to enter into cost-sharing agreements with companies to develop and demonstrate SAF and emissions- and noise-reduction aircraft technologies;4 and the Aviation Sustainability Center (ASCENT), a research consortium of federal agencies and universities working to accelerate the testing and approval processes for SAF, and build regional supply chains to help get these fuels into the jet fuel supply.5

The House bill would provide $77 million for this account—a 14% increase over FY22 and nearly matching our request—while the Senate bill would provide just $70.5 million, a mere 3.7% increase. Earlier this year, Congress more than doubled the budget for this account for FY22, from $31.5 million to 67.5 million, with most of that increase going toward SAF research. While this might make appropriators hesitant to give these programs another large boost, it is worth noting that last year’s Senate bill would have brought this figure up to $76.5 million, nearly in line with what the House passed this year. FAA is leading the charge on getting SAF past the current 50 percent blending limit so aircraft can safely operate on 100% SAF,6  reducing lifecycle emissions for SAF production, and developing robust supply chains for SAF; additional funding is key to accelerating this work and ensuring that we can keep pace with our climate goals. 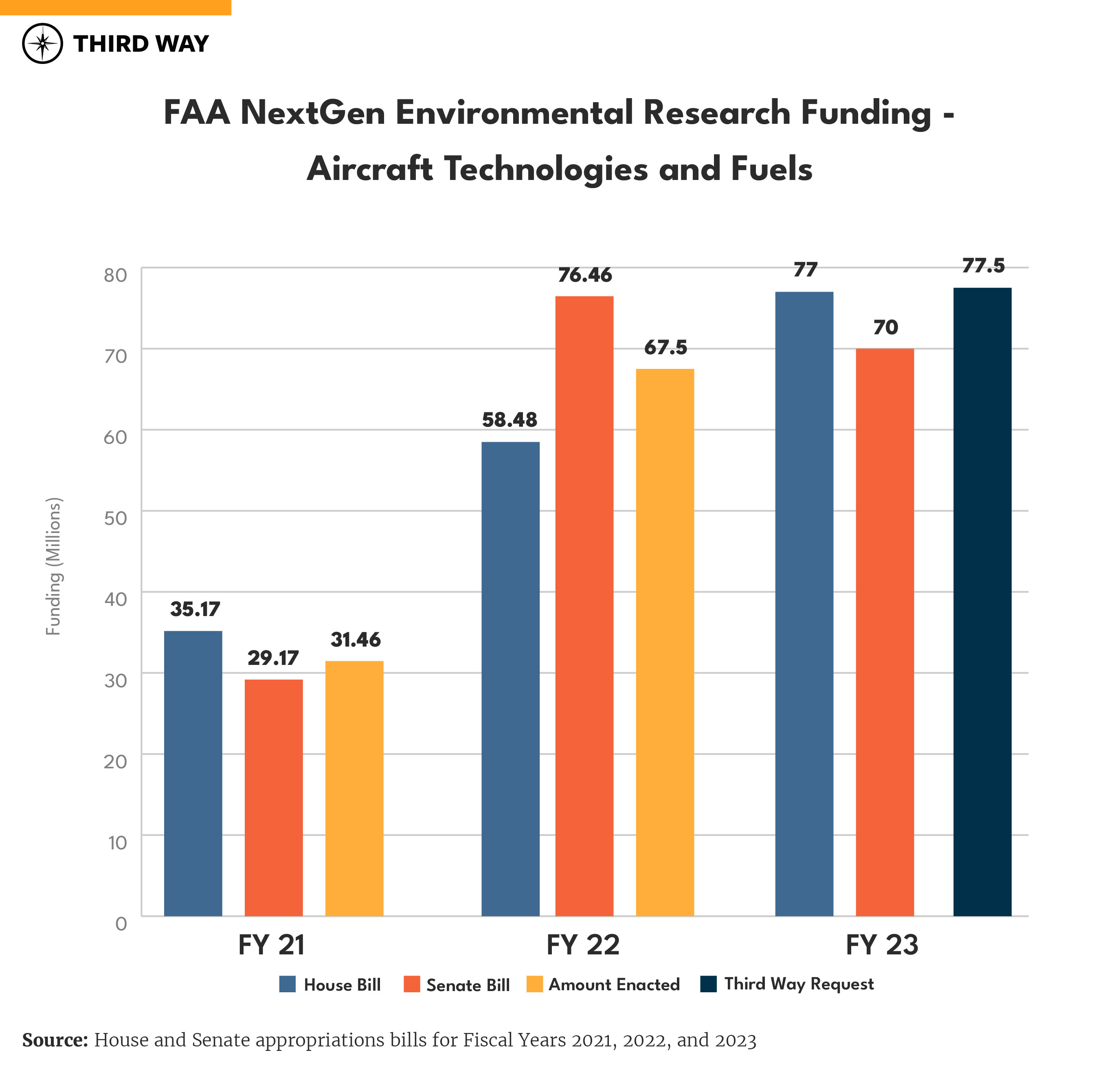 The USDA’s Coordinated Agricultural Projects (CAPs) are designed to help develop regional industries producing advanced biofuels and other bio-based products. Projects are awarded competitively through the Agriculture and Food Research Initiative’s (AFRI) Sustainable Agricultural Systems program and focus on enhancing economic investment and job creation in rural areas and improving national energy security. Projects bring together private companies, university research centers, and federal agencies to address challenges associated with producing biomass feedstocks and converting them into fuels and other useful products and to analyze the impacts of these feedstocks on agricultural and forestry markets, rural communities, and ecosystems.

The House and Senate reports do not include any new language for AFRI specifically related to SAF feedstock production, though relevant projects will of course continue to be eligible to apply. In terms of funding, the House and Senate reports include funding levels for AFRI, but as usual do not specify how much of that should go to the Sustainable Agricultural Systems program within it. If we assume that this program will receive the same proportion of funds from the AFRI account in FY23 as it did in FY22, then the program would receive about $89.9 million in the House bill and $81.8 million in the Senate bill—a 12% and 2% increase, respectively. Given that CAPs are usually funded at around $10 million each, the Senate bill would likely not enable USDA to grow the number of awards it can make in this program, and therefore we strongly recommend the House funding level.

NASA’s Aeronautics programs have been working to reduce aviation emissions through advancements in aircraft electrification, aerodynamics, and engine technology. This includes working with other government agencies and with industry to conduct ground and flight tests of different blend levels of SAF and evaluate their performance and emissions compared to traditional fuels. These efforts are critical to getting new SAF certified and into commercial use more quickly and are thus essential to reducing emissions in the short-term. In the longer term, NASA is also working on developing next-generation propulsion systems, including electric- and hydrogen-powered aircraft, that will help decarbonize aviation completely.

The House bill provides $950 million for Aeronautics, while the Senate bill provides $971.5 million, which matches the President’s Budget Request. While neither chamber specifically calls out SAF in their reports, both chambers emphasize support for research into technologies that can reduce aviation emissions. This includes projects relating to aircraft electrification, drag reduction, airframe designs, fuel efficiency, and more. It is difficult to say how much of the funding increase would go to toward these types of projects given the size and breadth of the Aeronautics program, but explicit support for multiple clean technology projects demonstrates that sustainable aviation remains a priority for Congress. 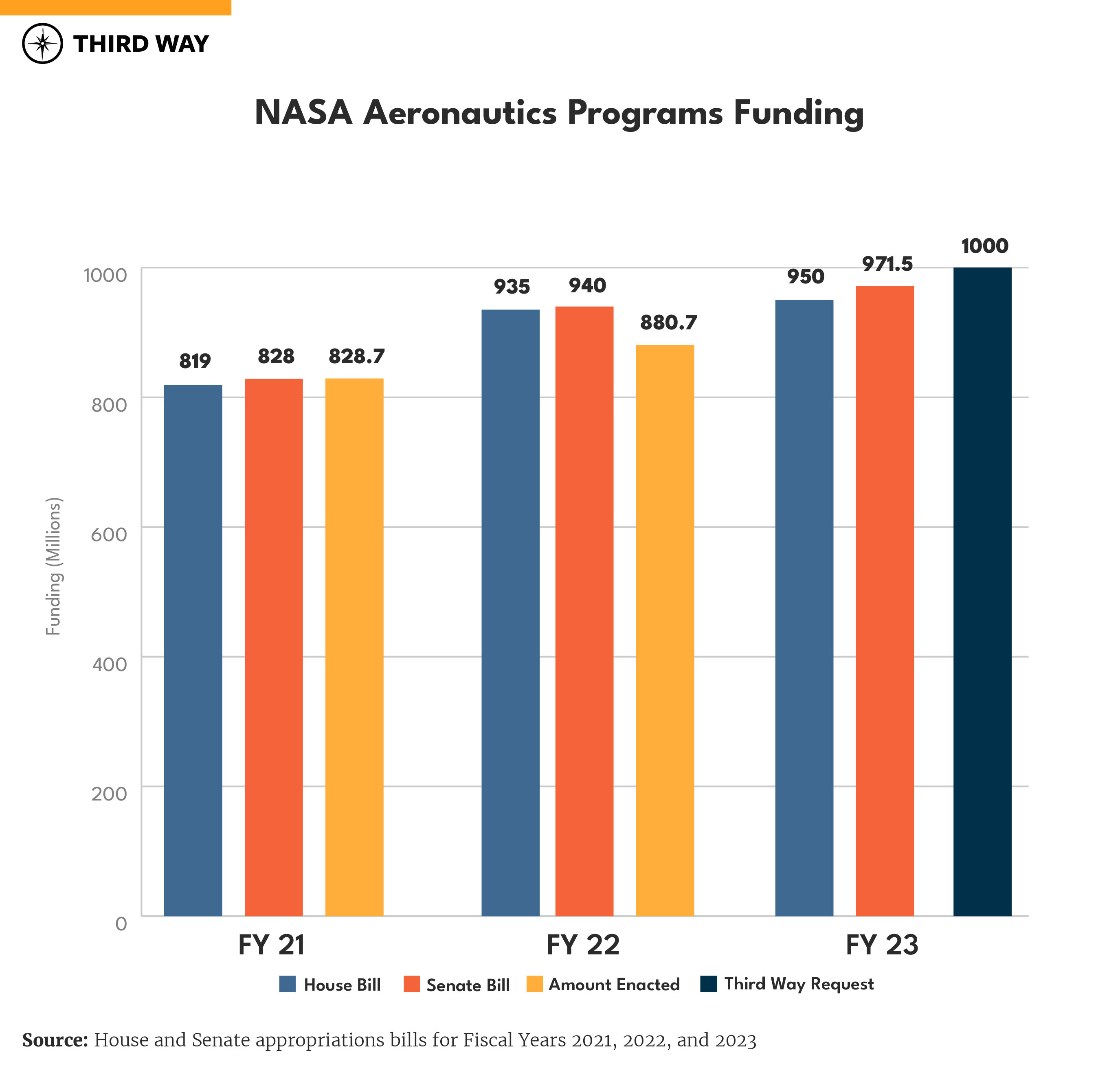 In 2020, Congress established through the National Defense Authorization Act (NDAA) a direct air capture and blue carbon removal program within DOD, directing the Department to develop and test technologies to capture carbon from the air and ocean and convert it into fuel and other useful products like building materials. Given the current global supply chain disruptions and international conflicts, military installations would benefit from technology to convert excess carbon dioxide into fuel onsite. While these direct air- and ocean-capture and conversion technologies are still in the early stages of development, they could ultimately unlock a pathway for zero-emission jet fuel while increasing the military’s energy security and readiness.

Both bills fully fund DOD’s air capture and blue carbon removal program at $10 million7 and provide additional support for other clean fuel initiatives. The House includes new language recommending that the Department continue to broadly develop and demonstrate carbon capture technologies with military applications to meet the climate challenge and enhance energy security. It also includes $20 million for the Department’s seawater to jet fuel demonstration project, which the Navy has been working on for several years but which has not previously received line-item funding. The Senate does not include either of these provisions but does add a new line item allocating $7.5 million for sustainable aviation fuel propulsion research. We recommend Congress include all of these programs in the final FY23 appropriations package to jumpstart DOD’s efforts to develop and scale up technologies to produce zero-emission alternatives to fossil jet fuel.

Sustainable aviation fuel is essential to reducing aviation emissions in line with the goals of the Biden Administration and the international community. Agencies throughout the federal government have worked collaboratively and must continue to do so to develop and approve new SAF pathways and help scale them up towards commercialization. Congress should recognize the role that federal investments have played in RD&D of SAF and the importance of boosting these investments to develop newer, cleaner fuels for one of the hardest transportation modes to decarbonize. It’s also important that we capitalize on the recent investments from the Inflation Reduction Act to cut the cost of SAF and scale up production-related infrastructure.

Congress has passed a short-term funding patch through December 16, and we do not know how the rest of the FY23 appropriations process will play out after that. However, if we are to rise to the occasion of the SAF Grand Challenge and get aviation on a path to decarbonization, Congress needs to support robust funding for the federal programs that are working towards that goal.