Digging Himself Into a Hole: Trump’s Empty Coal Promises

Republican nominee, Donald Trump, has promised to “bring the coal industry back 100 percent.”1 Much like his other grand promises to build a “big, beautiful wall” or temporarily ban all Muslims from entering the country, this bold assertion doesn’t seem to be based in any economic or political realities.

His pie-in-the-sky promise of a complete return of coal jobs underscores the fact that Trump doesn’t understand the seriousness of the situation. Four out of the top five coal producers in this country have gone into bankruptcy, coal seams are getting thinner, and natural gas prices aren’t rising any time soon.3 There is a real crisis going on in coal communities—a crisis that demands real solutions, not empty promises.

If we take a hard look at what Trump would have to do to make good on his pledge, it’s clear that “saving the coal industry”4 would require disrupting energy markets, cost taxpayers, and, despite all claims to the contrary, hurt coal workers.

The Cost of Making Coal Competitive with Gas

To make coal prices competitive again in U.S. markets, Trump will have to deal with coal’s main competitor—natural gas. The recent shale gas revolution, jump-started by the development of fracking technology, led to massive shifts in production from coal to natural gas over the last decade. In fact, even as the coal industry lost 10,000 mining jobs since 2006,5 natural gas extraction generated around 50,000 jobs during that same period.6

This trend isn’t going away. Natural gas actually overtook coal as the largest source of electric power in April 2015 at around 31 percent to coal’s 30 percent.7 In fact, the Energy Information Administration (EIA) projects that natural gas will consistently surpass coal in U.S. electricity generation by the end of this year.8 Energy analysts and credit rating agencies agree that this shift is the result of historically low gas prices and is the primary driver for the decline in coal jobs over the past 5 years, not any Obama-era environmental regulation.9

Even if Trump were able to magically get rid of all coal regulations, he’d still have to find a way to reverse market trends. This would require Trump to either tax natural gas for its success or hand out money to the coal industry to make coal more competitive. Either way, Trump would have to find a way to close an almost $23 per MWh gap between the cost of natural gas and conventional coal.10

To make coal and natural gas level, coal production would have to return to its peak of 1,162,750 thousand short tons in 2006. But doing so would be expensive. If he paid for it by taxing gas, this production shift would require an $11 billion per year tax on the natural gas industry as long as prices remain stable.11 The effect of this tax would squeeze the natural gas industry and negatively impact the nearly 198,000 people that work in shale gas extraction alone—more than three times the number of jobs in coal.12

Alternatively, Trump could provide this $11 billion to the coal industry in the form of subsidies, shifting the burden of his coal promise onto the backs of the American public. This subsidy would still distort markets and harm the natural gas industry, much like a tax on gas production would. If coal prices were to suddenly become cheaper thanks to Trump’s very visible hand, natural gas would no longer be as competitive. There isn’t unlimited demand for energy in this country. Cheaper coal would drive out gas, leading to layoffs in the natural gas industry and market uncertainty as supply and demand recalibrate.

Trump does, however, have a third option. He could ban fracking, the technology that has helped make natural gas so cheap and abundant. Of course, this would be one of those environmental regulations that he purportedly loathes. Trump has recently stated that while he is in favor of fracking, he would support the decisions of states and municipalities that vote to ban the practice.13 Altogether his views on fracking remain inconsistent, especially when he is surrounding himself with fracking-friendly energy advisors, like Congressman Kevin Cramer and mogul Harold Hamm.14 Whatever option he chooses to boost coal, the negative consequences of Trump’s meddling in these markets would be far greater than the benefits to coal workers.

Would This Be Enough to Reach Employment Goals?

If Trump were able to push production levels of coal back up toward 2006 levels, either by offering coal a subsidy or taxing gas production, he still wouldn’t bring back all the coal jobs in the United States at the industry’s last period of peak employment in 1980. That’s because improved technology and automation of the production process has dramatically reduced the number of workers needed today to mine the same amount of coal as was mined in 1980. This explains why employment in the coal industry, nationwide, has been decreasing for decades—long before President Obama took office.

The above graph puts the recent coal employment decline in perspective. The box shows the coal employment trends during the Obama Administration. With a bit more context, it becomes harder to blame President Obama for the sustained downward trend in coal jobs.

Trump and his allies have railed against the Environmental Protection Agency (EPA) and its “totalitarian tactics.”15 But again, the main reason why coal employment has declined over the years is that mining has become much more efficient. For instance, a miner today is seven times more productive than a miner back in the 1920s. Even compared to the most recent peak in 1980, today’s coal miner is more than three times as productive.16 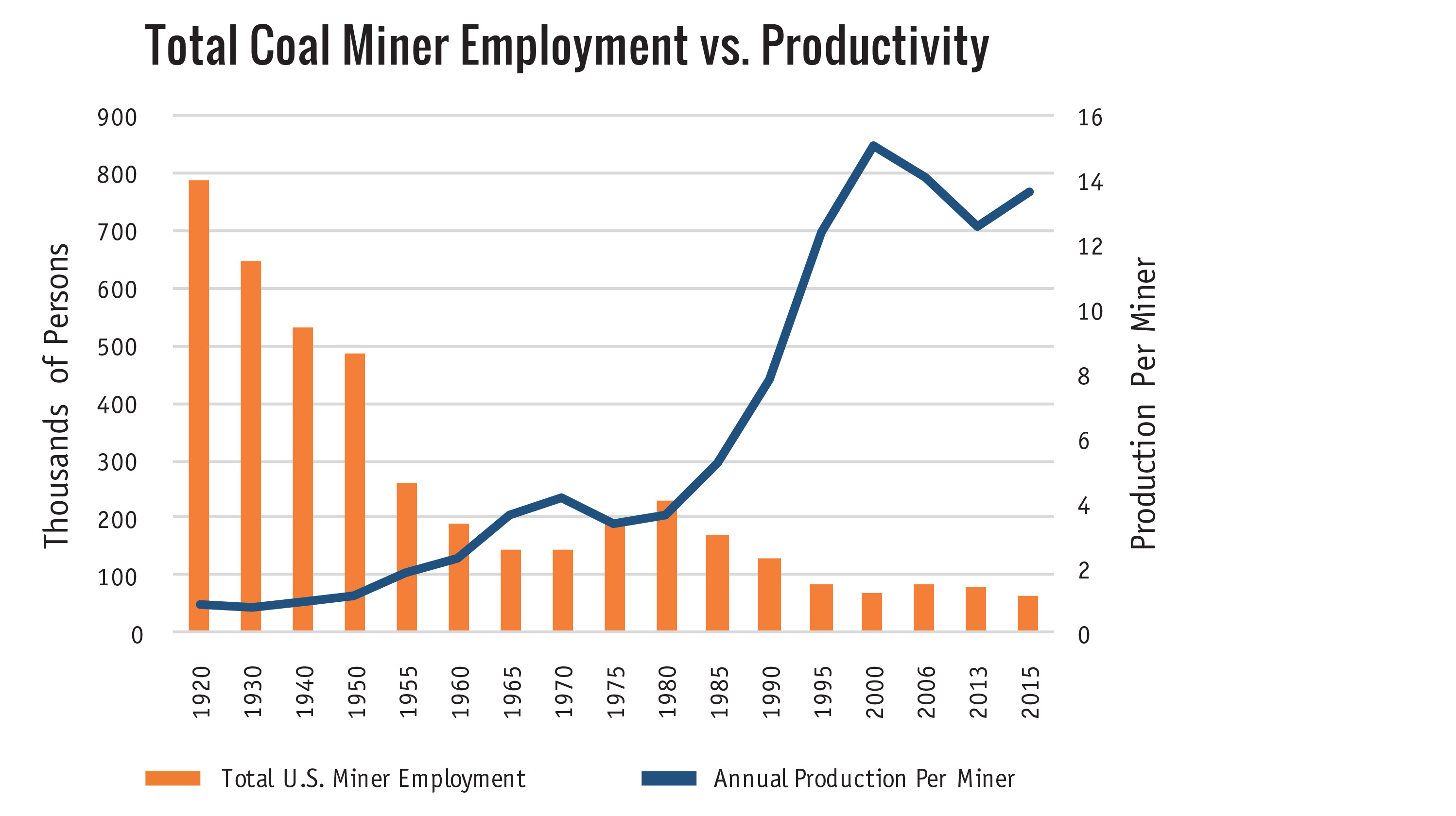 If Trump was serious about providing a way forward for coal, he wouldn’t simply promise and bluster. Instead, he would promote investment in innovative ways to steer the market toward decarbonization as the world moves toward cleaner energy sources. For example, Trump could incentivize technology like carbon capture and storage that can safely and permanently sequester emissions from coal while still generating energy. He could also help unlock new drivers of economic opportunity by building new roads, bridges, water systems, airports and transmission lines to connect communities to more diverse employment opportunities.17

So coal communities beware: the snake oil being peddled by the Republican nominee is not going to cure what ails you. Instead, you need real help from the government that is based in energy market reality.