Democrats’ Dividend is in the Details on the American Jobs Plan

President Biden has proposed the $2 trillion American Jobs Plan, an ambitious agenda to transform the country’s infrastructure and transition to clean energy. Thus far, Republicans have largely met Biden and Democrats’ offer with hollow calls for compromise, including a non-starter counteroffer that would have added just $257 billion in new funding. By presenting a counteroffer that they knew Democrats would reject, Republicans are betting that the devil is in the details on the American Jobs Plan: They believe they can leverage the plan’s details and price tag to convince Americans to reject the plan and turn against Democrats at the polls in 2022.

However, new polling from Third Way and Avalanche Insights shows that for the American Jobs Plan, the dividend—not the devil—is in the details. Biden’s plan to transition the economy is popular with voters, but it becomes even more so when they hear its particulars.

While negotiations in Congress over the legislative process have dominated reports about emerging infrastructure proposals, the average voter is unlikely to care which vehicle Congress uses to emerge from a historic economic recession and tackle climate change—as long as it gets done. As our research confirms, voters want real, tangible climate action like the provisions included in the Biden-Harris American Jobs Plan, which offers voters what they want from the country in the 21st century. Specifically:

But these results come with a warning: While voters are clear on what is most important to them from a clean energy transition, they are skeptical that some of these goals are achievable. When asked what outcomes are likely from a clean energy transition, voters worry that it will cause job losses and rising bills and costs. Maintaining public support for the American Jobs Plan or a similar infrastructure package built around clean energy and addressing climate requires addressing and reversing voters’ economic concerns about these actions.

Third Way partnered with Avalanche Insights to conduct a national “listening survey” on voters’ sentiments on the American Jobs Plan and other climate/clean energy topics. Listening surveys include open-ended questions where voters can share sentiments in their own words, as well as close-ended questions. This survey has a base sample of 3,508 registered voters, and oversamples of working class, non-college, and Midwestern voters. The survey was conducted May 1–4, 2021.

Without a Price Tag or Specifics, Support for Biden’s Plan Falls Along Partisan Lines.

A majority of voters back Biden’s plan when generically stated as a “transition to clean energy,” but this support is not overwhelming at 58%. This mirrors support for Biden on energy policy, which also stands at 58% right now.

This slim majority is the product of a narrow coalition of voter groups who back the generic plan. The American Jobs Plan has near-universal support from “strong Biden” voters—those who enthusiastically backed the president in 2020—and it even polls at 75% with “soft Biden” voters, or those who more tepidly backed him last year. But support drops off to 39% with “soft Trump” voters, who are voters that Democrats need if they want to build broad-based support for legislation or robust electoral majorities. Support for the plan is nearly non-existent with “strong Trump” voters, a group that should not be a target for legislative or electoral persuasion. 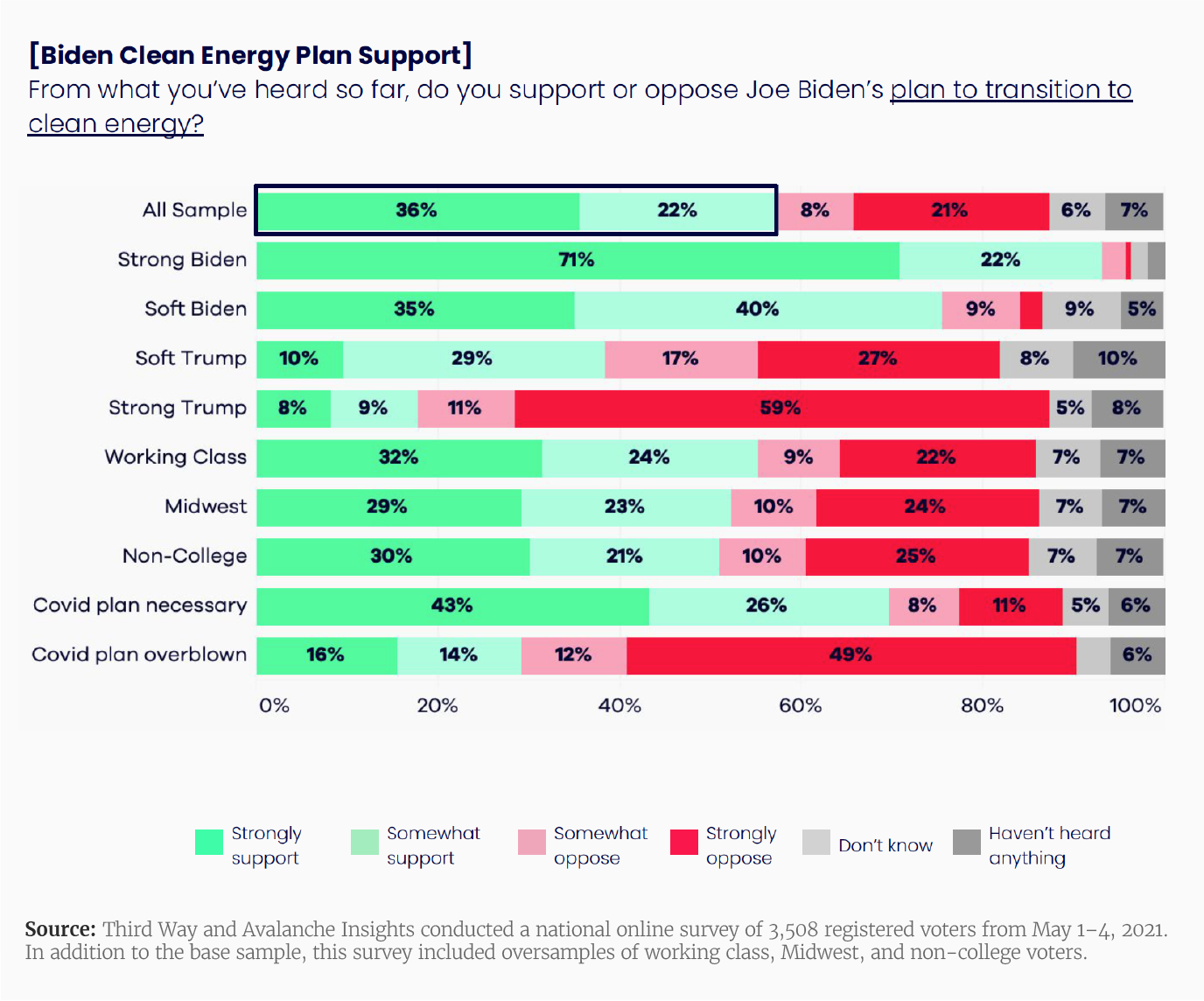 Stripped down of policy details, Biden’s plan gets majority support from voters, but it does not represent a mandate for action for the administration. But a generic plan is not what Biden and Democrats are taking to the American people. The American Jobs Plan is full of details on key investments in our economy. Both Democrats and Republicans believe these details will seal their case with voters; Democrats’ case for it and Republicans’ case against it.

The Fully Articulated American Jobs Plan Gains Support Across the Board, Including with a Majority of Soft Trump Voters.

When voters hear a more in-depth description of what is included in the American Jobs Plan, and the $2 trillion price tag, support for it surges eight points from 58% to 66%. This speaks to Biden and Democrats’ case that the details are a selling point.

Support for the detailed plan increases across crucial voter groups, but most importantly, the details are persuasive with soft Biden and Trump voters who can make or break legislation and elections. Support among soft Biden voters increases from 75% to 86%. And among soft Trump voters, support jumps 11 points to 50%. The detailed plan also wins over majorities of working class, non-college, and Midwestern voters. 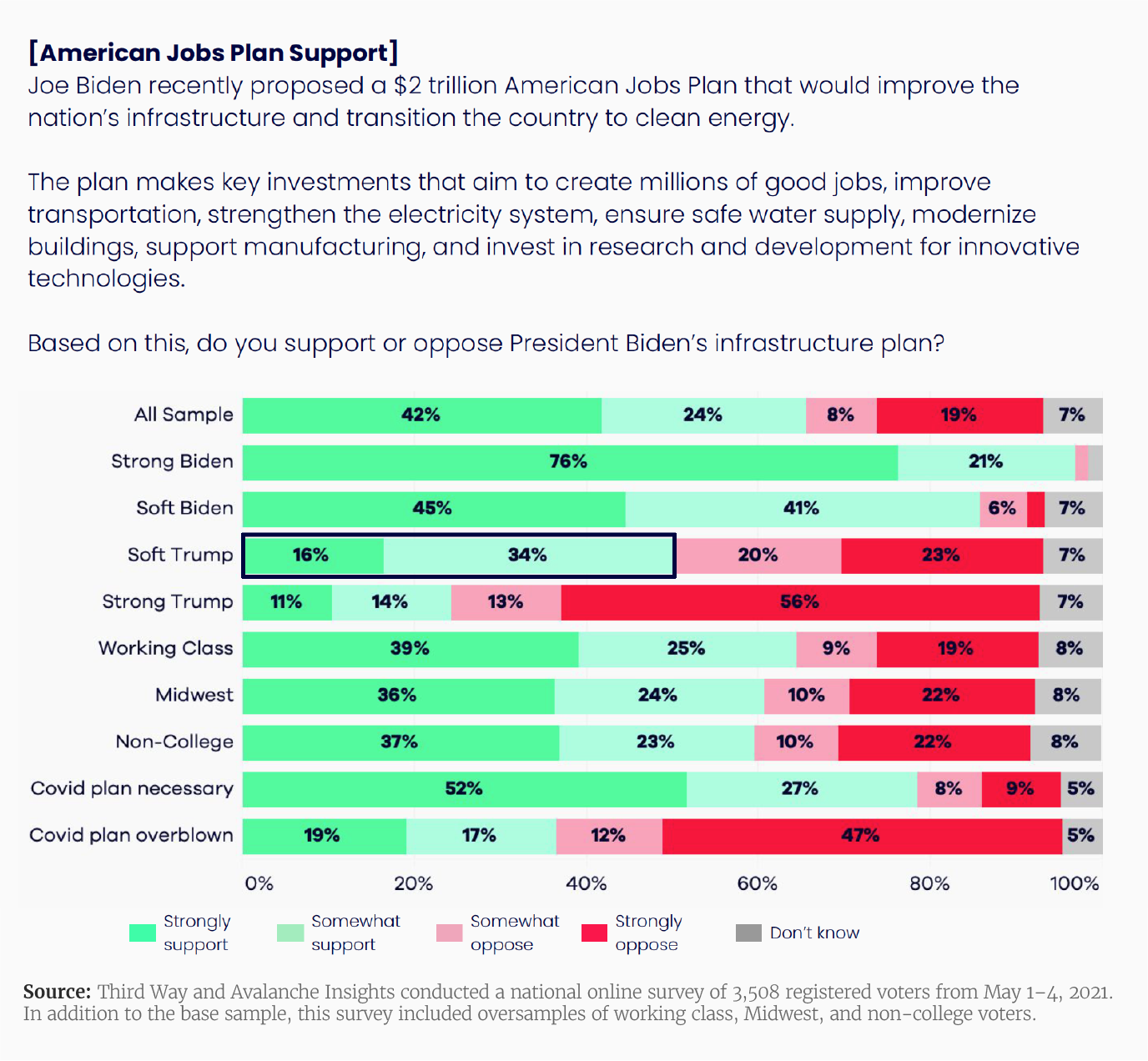 Comparing support for the generic and detailed plans clarifies that the dividend is in the details when it comes to the American Jobs Plan. The more voters hear about it—even the cost associated with it—the more they like it. That goes for both Democrats’ base and persuadable voters. Biden and Democrats can confidently lean into a fight with Republicans on the specific merits of the plan.

The American Jobs Plan Offers Voters What They Are Looking for from the Country in the 21st Century, but They're Skeptical That Some Goals Are Achievable.

The American Jobs Plan becomes more popular with voters after learning the details because it offers them what they’re looking for from the country in the 21st century. But they’re also skeptical that some of its goals are achievable. That makes selling the plan challenging and essential.

In the survey, after answering some questions related to clean energy, health, costs, and competition, voters were presented with an open-ended question on what the most important outcomes of a clean energy transition would be for them. Voters’ responses closely aligned with the core components of the American Jobs Plan. Their top goals included cleaner air and environment, new jobs, and lower bills and cost of living. Biden’s plan prioritizes these same goals by pledging to improve electricity and water supply systems, create millions of new jobs, and modernize buildings and infrastructure. The details of Biden’s plan are a dividend for Democrats precisely because they align with voters’ goals for the future of the country. 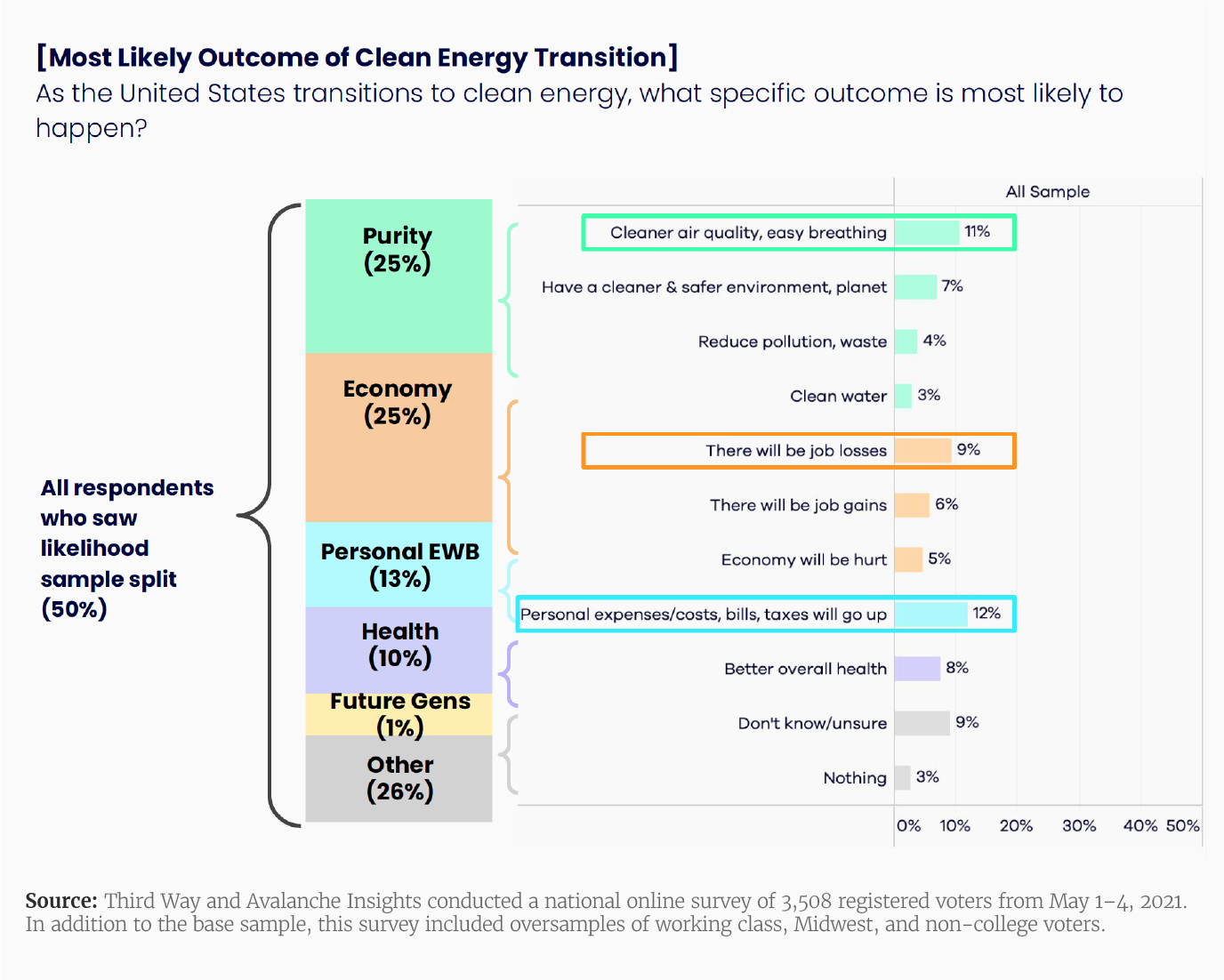 Biden and Democrats’ efforts to sell the American Jobs Plan benefit from the plan aligning with voters’ hopes for the country, but the challenge they face is that voters are skeptical about achieving some components of the plan—specifically its promised economic gains. Preserving support for the American Jobs Plan and a transition to clean energy will require convincing voters that the plan’s pledged economic gains can be realized.

Voters back President Biden’s American Jobs Plan that would transition the United States to clean energy and transform the economy, and their support only grows when they hear the details about it. This finding flies in the face of Republicans’ strategy on Biden’s plan, which is that as the details become known, support will erode. The plan’s details matter (and benefit Democrats) because they align with voters’ aspirations for the future of the country. Biden and Democrats can lean into the details when fighting for the American Jobs Plan, but voters need convincing that the promised economic benefits can be turned into reality.