Beyond BID: Getting EV Charging Plugged Into Reconciliation

Consumers are starting to see the value in electric vehicles (EVs), and automakers are leading the charge by going big on these vehicles and the necessary charging infrastructure.1 While private companies are building out more and more EV charging infrastructure to accommodate the accelerating shift towards EVs, we need federal support to ensure a robust buildout and to make sure this infrastructure is available to all drivers, including those in rural and underserved communities.

The bipartisan infrastructure deal (BID) is a good first step towards building out that nationwide, publicly accessible network and could help fund as many as 600,000 chargers. But we ultimately need far more than that to transition fully to EVs, grow the EV workforce, and meet our climate goals. Congress should use reconciliation to go beyond what’s included in the BID and provide additional support for EV charging infrastructure by extending and expanding the 30C Alternative Fuel Refueling Property Credit.

People are beginning to fall in love with EVs: Consumer Reports recently found that over 70% of drivers surveyed showed “strong interest” in buying an EV in the future. Not only that, 70% agree EVs would reduce air or climate pollution.  EV sales grew by a whopping 36% over the last year, more than double overall vehicle sales growth of 16%. They accounted for 4% of vehicle sales in July, an all-time high for the US.

Tesla was an early leader in US EV manufacturing and has been laser focused on this segment of the vehicle market. As a result, this one company is pulling in about 60% of America’s EV sales. But other automakers have caught on—they’re also going big on EVs and seeing returns on their investments. Ford recently reported over 100,000 pre-orders for its all-electric F-150 Lightning, and June marked the first month that its electric Mach-E outsold its gas-powered Mustang; and GM’s Bolt EV had its best first-quarter sales ever in Q1 2021, with retail sales up 60% over Q1 2020.

All of this good news means there will be a lot of EVs hitting the road in the near future—and we need to make sure there’s a robust network of EV charging infrastructure deployed to keep them going. JDPower’s recent survey showed that the factor most cited in deciding which EV to buy is the range—and how far the car can travel on a single battery charge. Americans want charging infrastructure that provides peace of mind and absolutely no range anxiety.

Unless we put the pedal to the metal on building out charging infrastructure, we won’t be able to unlock the clean air and economic benefits that switching to electric vehicles (EVs) will bring us. By expanding easy access to chargers across the country, we can eliminate range anxiety and ensure all communities have access to EVs and all of their benefits, particularly for those who do not have access to off-street parking.2

We have nearly 100,000 public chargers today, but we need many more 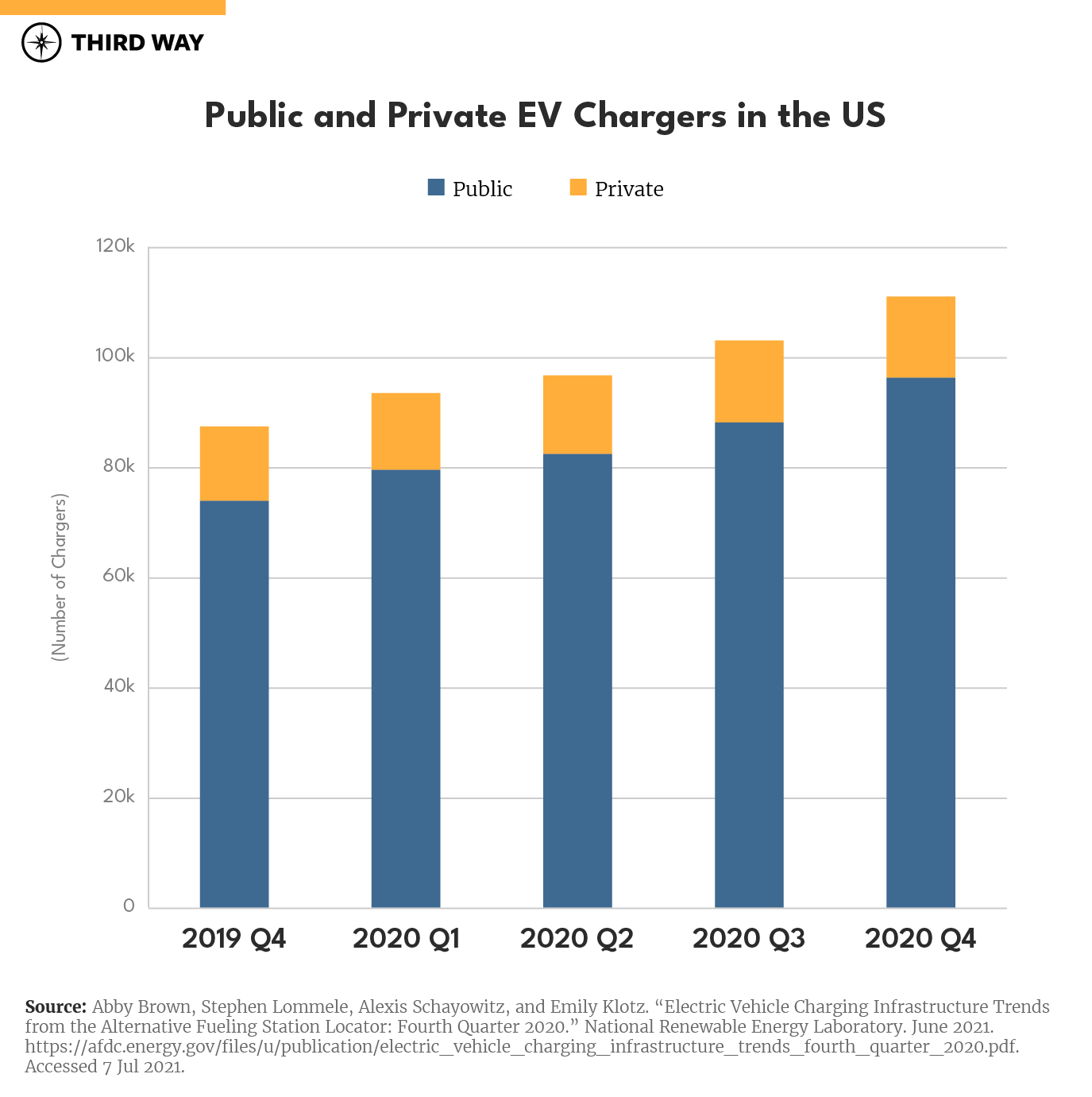 This is only a slice of the charging infrastructure we need by 2030 to ensure we’re on the path to 100% EVs on the road by 2050, which is important for mid-century climate goals. Third Way projects we need 50% of light-duty vehicle sales to be EVs in 2030 to make sure we’re making progress towards that longer-term goal.5 A trend projection of EV sales between now and 2030 shows we would have a total of 27 million EVs on the road in 2030 if we hit 50% of sales that year. These 27 million vehicles would require approximately 1.125 million public chargers to support them, or 1.03 million more than the 96,000 public chargers we currently have.6 This build-out is needed so that consumers will have certainty that they will be able to refuel their EVs wherever they are.

Companies are stepping up to meet the challenge of expanding EV infrastructure. Automakers like General Motors, Ford, Audi, and Rivian are all going big on EV charging to complement their investments in EVs, and retailers like 7-Eleven and Walmart are installing chargers at their stores to accommodate customers who drive electric. But to truly deploy EVs at the scale we need—and to ensure every American can access charging, including in low-income communities and rural areas—public investment will also be crucial.

The Bipartisan Infrastructure Deal is a good start, but more federal support is needed

How many chargers can this support?

Our analysis suggests that the $5 billion formula program for EV charging could support investment in just over 400,000 new chargers. This is about 100,000 shy of President Biden’s goal of installing 500,000 new chargers by 2030 as laid out in the American Jobs Plan. However, if the full $7.5 billion for alternative fueling infrastructure went to EV charging, then it could pay for just over 600,000 new chargers, which exceeds President Biden’s goal and would get us to about 704,000 public chargers (including the 96,000 already deployed) by 2030. Whether we can achieve that goal will depend on how the $2.5 billion in competitive grants is distributed among all types of alternative fuel infrastructure. For EV chargers supported by the grants, the type of chargers installed will also be key to reaching President Biden’s target.

Most expert modeling suggests a mix of roughly 90% L2 plugs and 10% DCFC plugs would be the most efficient mix of infrastructure to support charging needs.8 A $6.25 billion investment in EV charging infrastructure from the BID could then support the deployment of roughly 365,000 L2 and 40,500 DCFC.

The jobs impact is substantial

Congress should go further in reconciliation

The BID is a down payment on a much-needed buildout of the public EV charging network in the US, and it will support President Biden’s target of adding 500,000 chargers by 2030 if spent properly. However, Third Way’s analysis shows we need significantly more chargers—1.03 million more than what’s currently available—by then. Using the same 90-10 split between L2 and DCFC, we find that adding 1.03 million chargers would cost around $15.86 billion—nearly $6.5 billion more than what’s included in the BID (including the non-federal share) even if all of the BID funding goes towards EV charging.

Democrats should use the upcoming reconciliation package to complement the BIF and further expand charging infrastructure. Given the Administration’s preference not to revisit in reconciliation anything that was included in the BID (“double-dipping”), this would likely not take the form of additional grant funding. Instead, Congress should extend and expand the 30C Alternative Fuel Refueling Property Credit, which provides a 30% tax credit to help people install chargers in their homes and helps businesses install chargers at workplaces and in public charging locations. Congress could use this credit to help finance the remaining $6.49 billion in needed EV charging infrastructure investment, at a cost of roughly $1.95 billion to the federal government over 10 years. 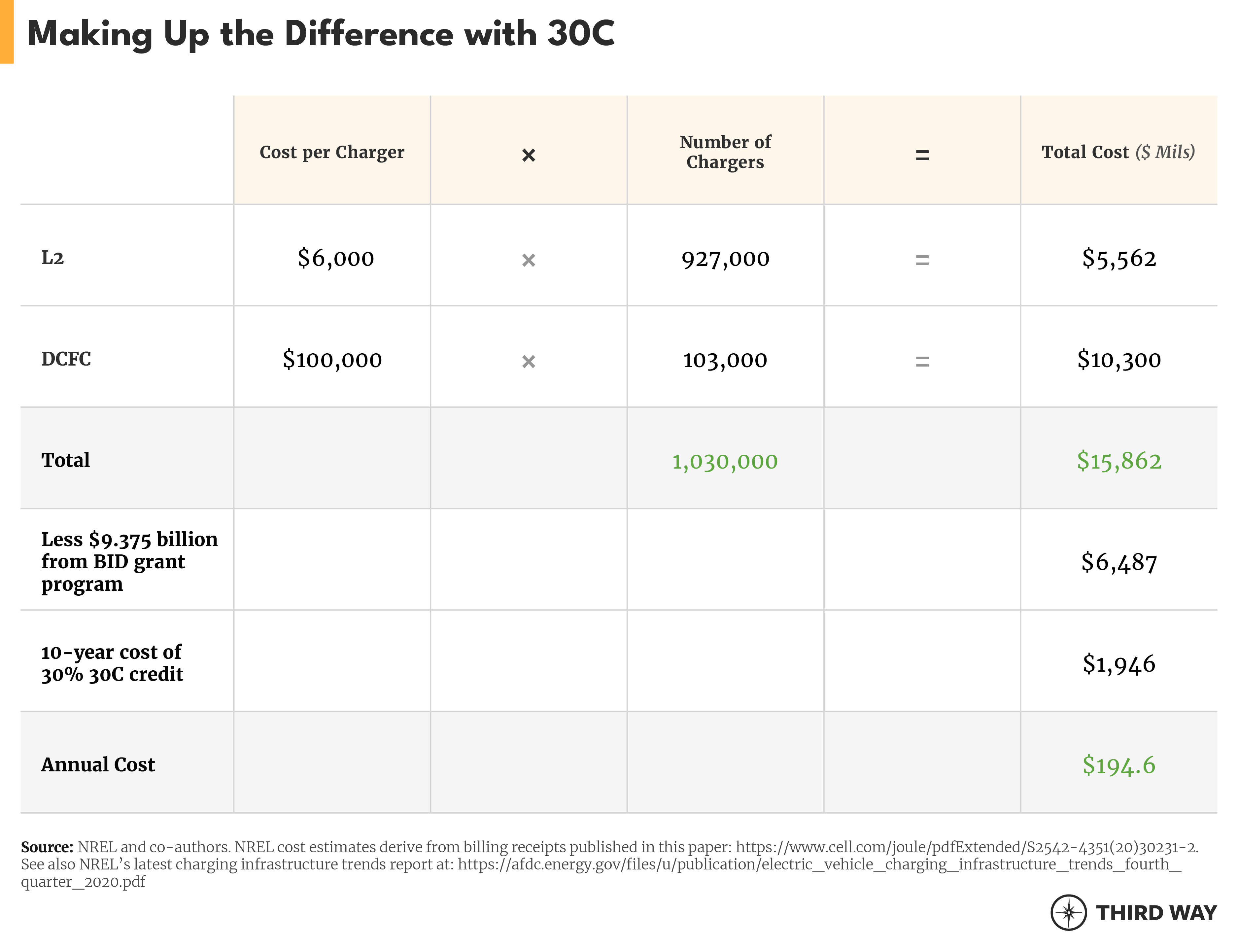 A 30C expansion is necessary for us to deploy the needed charging infrastructure to accommodate the EV adoption levels we need to see to meet our climate goals. In addition to helping us meet our goals for public charging deployment, it will also help deploy chargers that are not publicly accessible and thus would not be eligible for the grant program, including those that will need to be installed at commercial fleet depots and other workplaces and in multi-unit dwellings (MUDs). Thus, 30C would complement the BID grant program but would not be duplicative.

In addition to extending the credit, which otherwise expires at the end of 2021, Congress should raise the credit cap from $30,000 to $200,000 for businesses claiming the credit and should change the credit from a per-location basis to a per-charger basis. These improvements will particularly help fleet owners and other businesses that need to install multiple chargers in one location. Congress should also make the credit refundable at least for the next two years to better incentivize charger installation as the economy continues to recover.

The Clean Energy for America Act—the clean energy tax package recently reported by the Senate Finance Committee—accomplishes many of these improvements and can serve as a blueprint for a 30C expansion to be included in a reconciliation package. Additionally, President Biden’s Fiscal Year 2022 budget proposal includes an extension and expansion of the 30C credit, including giving businesses the option to elect a cash payment in lieu of claiming the credit (“direct pay”).

The oncoming transition to EVs will bring cleaner air and enormous economic benefits for American consumers—but we cannot unlock those benefits unless we build out a nationwide, publicly accessible network of EV charging infrastructure. Depending on how the money is spent, the bipartisan infrastructure deal could go a long way towards meeting or even exceeding the Biden-Harris Administration’s stated goal of building out an additional 500,000 charging stations by 2030, but far more than that is needed to accommodate a complete shift to EVs. Congress should use the upcoming reconciliation package to go beyond the BID by extending and expanding the 30C Alternative Fuel Refueling Property Credit. Getting to over 1 million chargers by the end of the decade will be enough to support a vibrant, growing EV market and unlock the economic, air quality, and climate benefits of an electric auto fleet.

Appendix A: The ABCs of EV Charging

As the graphic below explains, there are several different types of charging plugs, each with a different rate at which they can “fill up” a battery. While most EVs can plug into an alternating current (AC) Level 1 plug (i.e. a household outlet), this is by far the slowest way to charge an EV. Federal policy to support the deployment of EV chargers is centered on expanding the networks of the two fastest categories, AC Level 2 (L2) and direct current fast charging (DCFC). 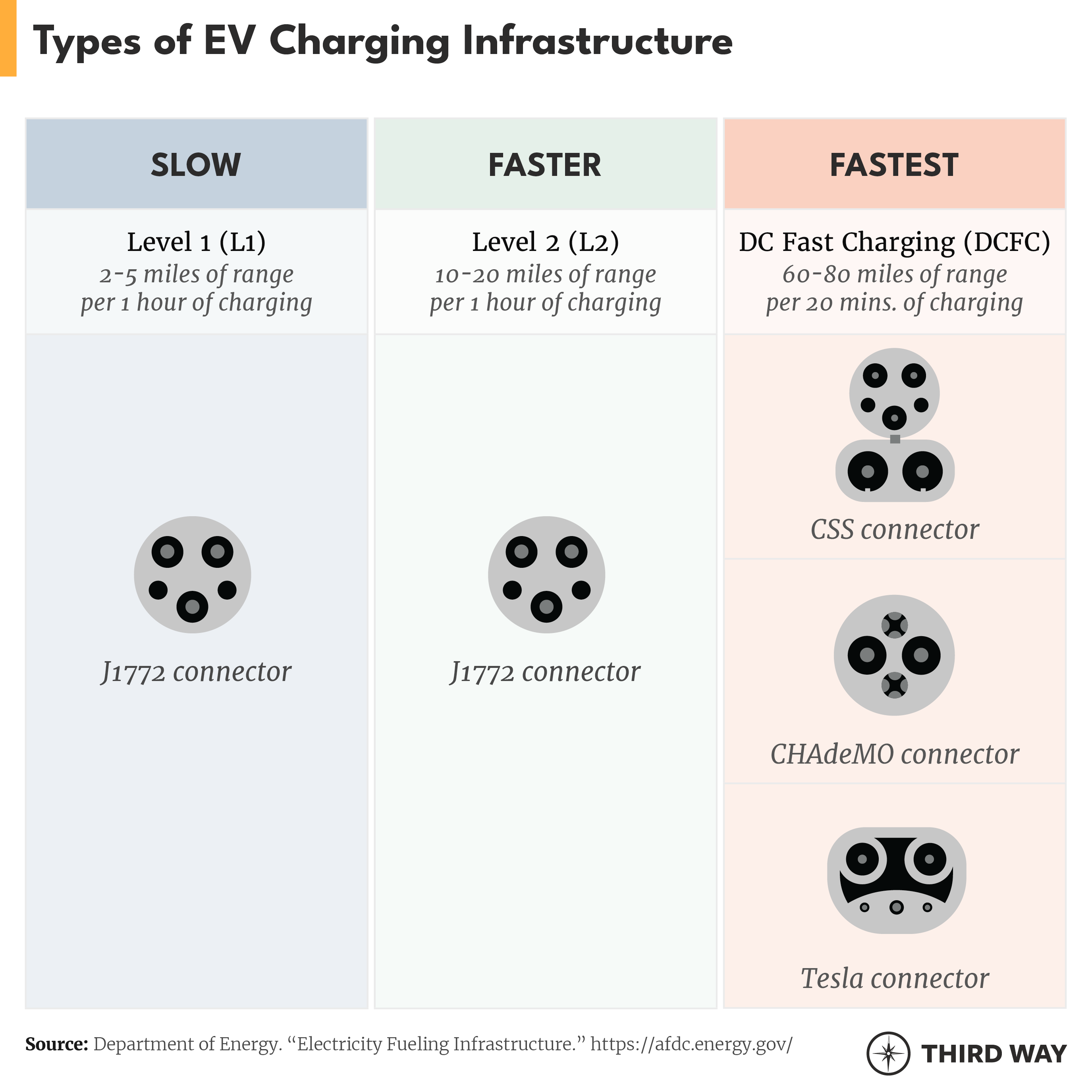 Level 2 chargers (L2) typically replenish an electric vehicle battery overnight or during an office workday. This is generally sufficient for 90% of Americans with cars, who travel about 30 miles a day. Installing L2 chargers near workplaces, commuter lots, and apartment buildings can ensure drivers have easy access to charging within their daily range. L2 chargers cost $6,000 on average to purchase and install, according to receipts compiled by NREL.

Alternatively, DC fast charging plugs (DCFC) can refuel an electric vehicle battery in less than one hour. For example, a 50kW DCFC can fill up 80% of an EV battery in about 40 minutes. A 150kW DCFC can fill up a battery in half that time. And 350kW DCFCs are an emerging option which would charge a battery in roughly the same amount of time needed to fill a gasoline tank. These chargers are ideal for national highway corridors and in densely populated areas where space is limited so that motorists can charge quickly and move on. However, they are significantly more expensive than L2 chargers, costing $100,000 on average to purchase and install.