Getting Climate Policy Through the House and Senate in 2020? Start Where There’s Overlap

Looking at the prospects for immediate climate action in Congress might leave you feeling a bit discouraged, but there is reason to be optimistic. Committees in both the House and Senate have been hard at work drafting bills, soliciting feedback, holding hearings, and moving legislation that could have a big impact on emissions. There are over a dozen energy policy areas where committees have passed bills in both chambers with bipartisan support. This overlap between the House and Senate, particularly for policies promoting clean energy innovation, shows a strong possibility for Congress to cooperate on these shared priorities and get legislation passed this year. 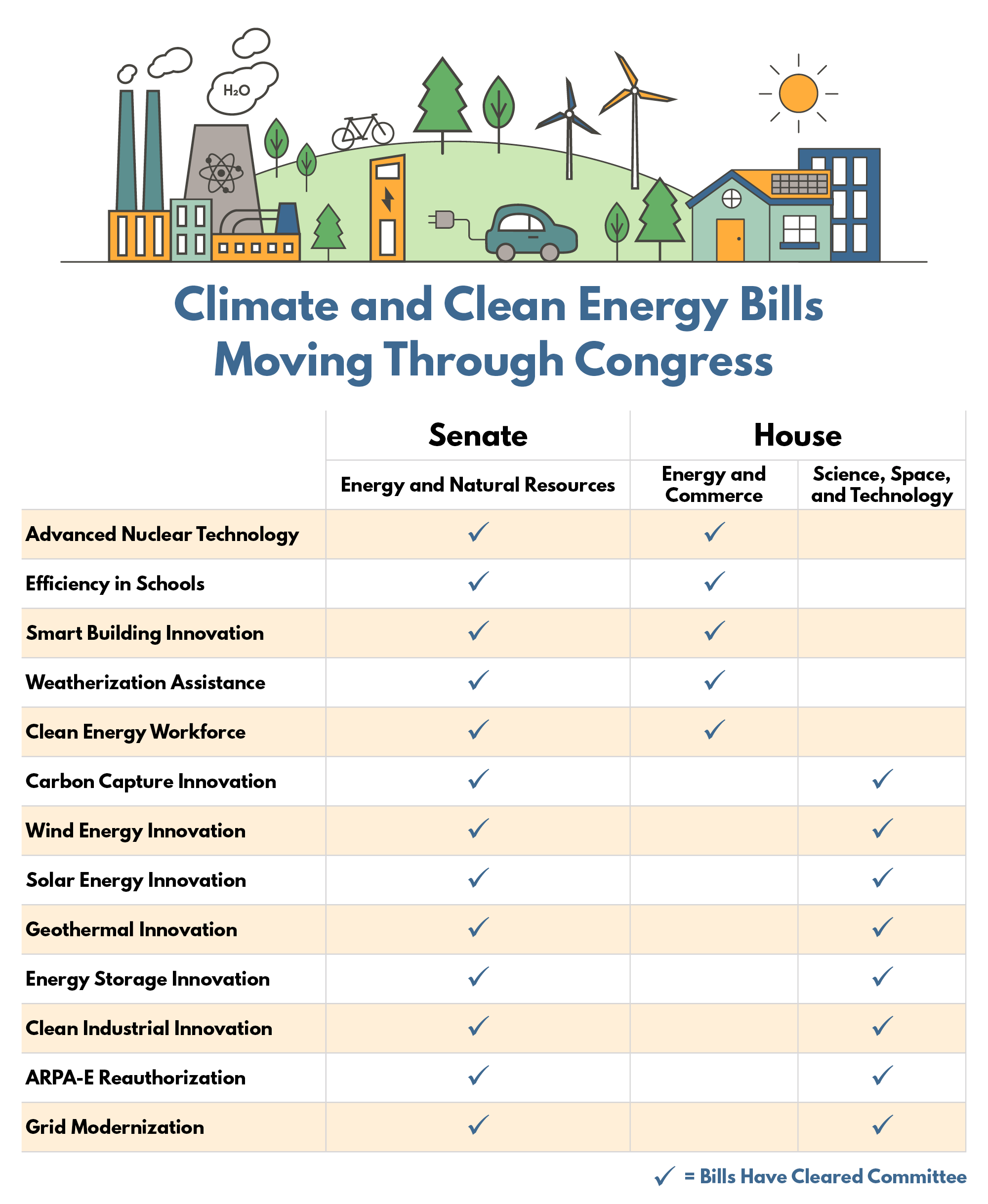 These innovation activities—including research, development, demonstration, and deployment (RDD&D) programs at the Department of Energy—are a critical component of any comprehensive climate solution. While today’s technologies have the potential to bend the carbon emissions curve, better and more cost-effective technologies developed through energy RDD&D will create a real prospect for achieving net-zero greenhouse gas emissions by 2050.

For most technology efforts, however, DOE is relying on congressional direction that dates back as far as 2005—that’s a lifetime ago in the innovation world. These outdated laws limit the tools the Department can use to accelerate the transition to a carbon-free energy system.

The legislation moving through both chambers updates direction for DOE across a wide set of technologies and provides resources needed to tackle some of our most difficult climate challenges. These widely supported bills have backing from Democrats and Republicans, progressives and conservatives, and various combinations of energy companies, think tanks, and environmentalists. Here are just a few of the clean energy areas where policy is moving in both the House and Senate:

The primary authorization for most of the DOE’s Office of Fossil Energy’s work, intended to reduce greenhouse gas emissions in fossil energy generation, expired in 2009. Congress has been moving no fewer than three bipartisan bills to refocus DOE programs that promote carbon capture, use, and storage and other promising low-carbon technologies, including the EFFECT Act in the Senate, and the LEADING Act and Fossil Energy Research and Development Act in the House. These bills would advance promising technologies that can address emissions from industrial processes, demonstrate carbon capture on natural gas power plants, and undertake new R&D activities in direct air capture, carbon storage and carbon utilization. Legislation is not identical between the House and Senate, though they share several key priorities.

Energy storage technologies are rightfully getting a lot of attention, since breakthroughs in storage will unlock our ability to balance supply and demand in the power grid, improve the delivery of clean energy, and play a pivotal role in protecting American households and industries from power interruptions. Looking forward, we will also need solutions to balance the grid on timescales ranging from fractions of seconds to seasonal variation. In recent years, DOE has expanded its storage resources but could be even more effective with updated authority from Congress. The BEST Act, which has cleared committee in both the House and Senate, would fund demonstration projects, create a joint storage effort between DOE and DOD, and provide technical assistance to ease the deployment of storage technology.

The DOE Advanced Research Projects Agency-Energy (ARPA-E) is an effective and popular innovation program supporting “high-risk, high-reward” research. Despite being less than a decade old, ARPA-E is already fostering groundbreaking technology innovation. As of March 2019, it has supported 145 projects that attracted over $2.9 billion in private sector follow-on funding, and 76 of its project teams have gone on to form new companies. ARPA-E consistently enjoys the support of companies, universities, and lawmakers across the country. Despite these successes, the program has operated under an expired authorization since 2013. Reauthorizing this highly successful program with important protections for proprietary business information and an expanded mission is critical to continue seeing these impressive returns on taxpayer investments.

The House and Senate will have to coordinate their approach if we hope to see Congress pass any significant climate and clean energy policies this year. This will require thoughtful negotiation to address discrepancies between bills and ensure the needs of various stakeholders are met. But having over a dozen priority policy areas shared by committees on both sides of the Capitol Dome provides a remarkably strong foundation for those discussions. They aren’t over the finish line yet, but the priorities are aligned, and the momentum is there. That’s a very good start.