Too Big to Fail: Companies on Edge Mean Workers are Too

Part fourteen in the Series
The Economics of COVID-19 with Dr. Ellen Hughes-Cromwick
View Series

A decade ago, the phrase too big to fail (TBTF) had a very distinct brand. During the Great Recession, TBTF industries were vital to maintaining the health of our financial system. But now, in a COVID-19 world, TBTF might have transformed to something entirely different. With 30 million people filing for unemployment insurance benefits in the last six weeks, and a jobless rate that could be like nothing we have seen since the Great Depression, America is in the midst of a jobs crisis. With more and more employers on the edge of ruin, some of our large employers might be our nation’s latest too big to fail consortium. In fact, one in three US publicly traded companies with more than 50,000 employees are in a vulnerable state.

How do we know this? Based on the S&P Capital IQ database, there are 161 US publicly-traded companies that have over 50,000 employees worldwide. We looked at the S&P credit ratings for these companies because they provide an assessment of their ability to repay debt: a key measure of the financial health of the company. When a company falters—has too much debt or its revenues are under pressure—it can be sign that it could default on its payments to lenders. Many companies in this universe of large employers have a credit rating that is just above investment grade or below investment grade, according to S&P.1

What we found is shocking: One in three companies, with over 50,000 employees, are either close to or below investment grade in terms of their credit rating. Why is this important? Because it means these companies will soon need to drastically restructure their businesses to remain financially stable. This, in turn, typically means that they will be looking to lay off workers. There are over 5 million workers at these companies. Many of these jobs could be the next wave of unemployed Americans if these companies fail. 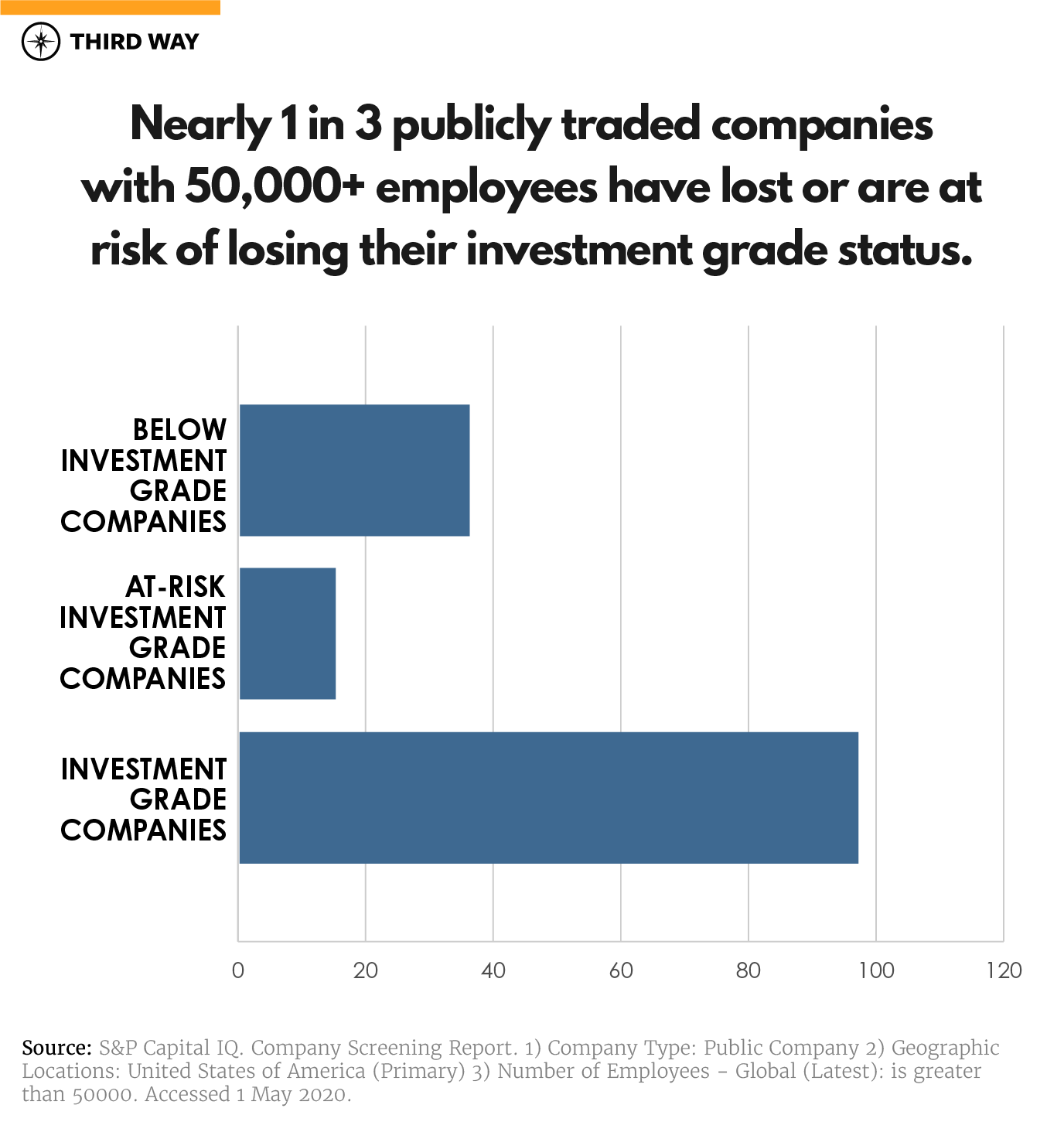 Congress has taken initial steps to provide critical assistance to publicly traded companies during the pandemic. To help large public companies, the CARES Act allocated $454 billion to the Federal Reserve to increase liquidity in cash-strapped credit markets, as well as for municipal and corporate bond purchases.2The CARES Act also provided one of the hardest hit industries, the commercial airline industry, with $25 billion in grants and loans to retain their workforce and operating costs. But with more companies and industries on the line, more will need to be done.

The US government has a responsibility in the event of extraordinary economic events to become a last-resort investor. Just as the government has given substantial capital to small businesses, it will need to address medium-size enterprises. The federal government will also need to step in to help firms whose closure will result in 50,000 or more jobs lost or whose industry is vital to a functioning economy.

But let’s be clear: this should not be a blank check. US taxpayer funds would be used to support these vulnerable companies. As we wrote last month, any subsequent legislation should include provisions for a US government stake in these companies in the form of warrants, equity, or bonds. That allows the US government to receive an adequate return for financial support. When determining whether to give a bailout, the US government must make the following considerations:

While there is so much about this pandemic we don’t know, there is one economic strategy that we have learned time and time again: we need to think big and bold. Congress and the Fed have acted fast, but far more is needed. One in three large employers are in a vulnerable state, with millions of jobs hanging in the balance. We need to be thinking about smart solutions to keep them afloat while ensuring workers are protected.